Both started doing really well, but the Golden (first two pictures) started wilting over the weekend. No sign of bugs, but now there are a few brown spots, mostly towards the end point of the leaf.

Red (last picture) is generally still looking normal, but has developed these spots in the last few days. 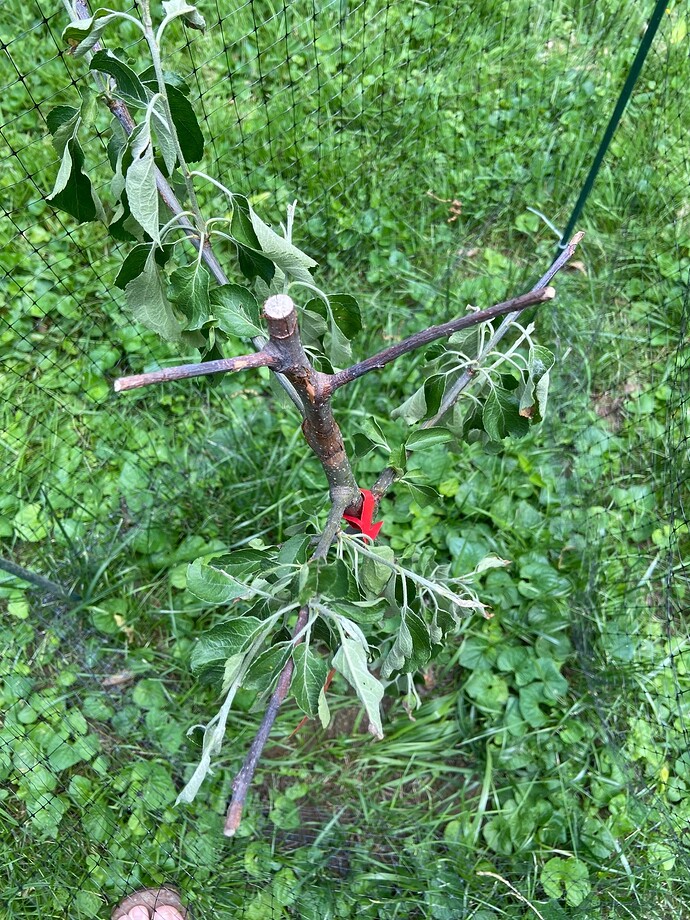 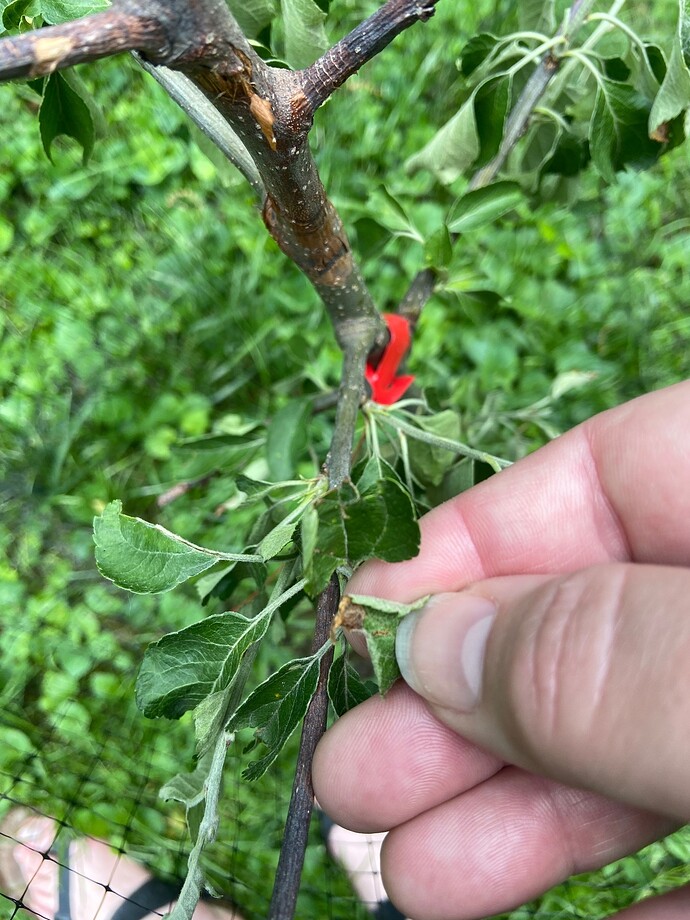 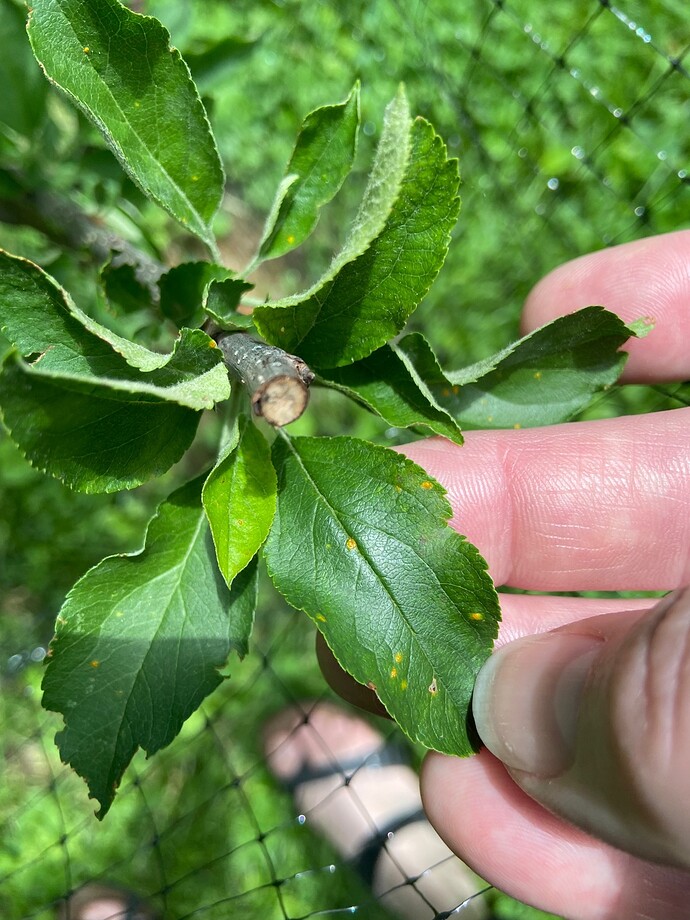 OK, I’ll start with an easy question. Are you watering them? The GD shows both wilting and wrinkled bark on its young shoots, which could be caused by insufficient water.

RD looks fine to me. YD is probably a goner…not positive the cause.

The RD will be fine. Appears to be cedar apple rust. When apples are planted near cedar trees (near can be more than a mile!) it causes problems for the apples. We can teach you how to spray for that later. Your Yellow Delish is far more troubling. The wilted leaves, the obviously dried/wrinkled bark in some areas, all seem to point toward that tree being dead or close to it. Could be from lots of things. The most important thing you can do for it is to water it a LOT (for not, not all the time). There is a small chance that it will perk back up- but not likely. If you haven’t been watering then start now and keep it soaked for a day or two. The black areas look like Fire Blight but that usually won’t cause an entire tree to wilt like that- at least not in my experience. Keep us posted, and get some water on that tree! (both for that matter) and lets see what happens.

Will do- we’ve had a ton of rain and I’ve been watering, but I’ll do more. We also just started getting into the 90’s.

I agree it almost looks like fire blight. You can tell the trees that get it because it looks almost like it got caught on fire. If you look at some of your pictures it looks black like that. There is not cure to fire blight. If it is fire blight I would remove it because fire blight can spread to other apple and pear trees in the neighborhood. If they sold it to you like that take it back to them.

That’s bad news…I was hoping maybe for whatever reason that tree just hadn’t got any water. If you’ve had lots of rain and you’ve also watered, I doubt more water will help. That brings on the opposite question: has it had too much water? That is only likely if you think it might be standing in water. For example, if you have clay-rich soil that doesn’t drain well and you dig a hole in it to plant the tree, sometimes it forms its own little “pot” that holds water around the roots for long periods of time. Or if its in a very low area where water drains down to. You wouldn’t always see standing water but it can “stand” just below the surface. Might be worth digging down a few inches to make sure you don’t find actual water around the roots.

I thought the same thing about the blackened stem areas, but have you ever seen leaves wilt with no black/burned look? Over an entire tree all at once (albeit a small one)? When my leaves show fire blight they almost immediately are black and crispy- not green wilted like those? I agree FB could be the culprit and I said as much, but I’m a bit skeptical that it is. When I see this much green wilt this fast, if often is something with the roots- either moles or worms or other insects or diseases or water issue. Other then the black spots on some limbs, its hard for me to see this clearly as FB? But I don’t know…I’m trying to learn here too!

It could be the soil- there are large pockets of clay in my yard and this is at the lower end of the property, slope-wise. I’ll go out and dig a little and see if I can see standing water.

Any other apple or pear trees nearby? I agree the gd looks like fireblight. Lost a couple new pears to that a few years back. I removed an infected quince which was the source.

Looks like canker to me. When I first started growing apples I would lose them all to canker on any of the “M” rootstocks. Been using bud 9 and G-11 since. No problems. I grow urban garden and have to keep everything small as possible.