I’ve been fortunate enough to taste a few fruits for the first time this year, and I would really like to hear from others who have the same fruits and see if we have similar views on them.

The first one is black currants. But I’ve already talked about them (I was NOT a fan but @mrsg47 has convinced me to keep them around and try some jam/jelly next year)

Probably the one I’m most excited about is Morris Plum. While it certainly isn’t rare, I also don’t see Morris talked about much at all-anywhere. WHY NOT??? I am in love with this plum… It is super sweet, doesn’t have a strong “plummy” flavor I don’t like (I know that doesn’t make sense but I don’t know how else to describe a strong plum flavor that I don’t like and some have-but not Morris). This tastes a little more like a pluot to me, though I’m sure it is Morris Plum. Also, and maybe this is just a fluke, but for some reason this is one of my only plum trees that didn’t loose all or most of its crop to frost. Its a 6 year old tree so its been slow to produce, but it was loaded this year. This is the kind of surprise that makes me keep trying so many trees- Morris isn’t on most lists I’ve seen of favorite plums, but my experience is that it should be! ANnone else grow Morris? THoughts?

I got my first real crop of “white donut peaches”. I assume it is a Saturn, but it was a big box store tree and the label just said “White Donut Peach”. OK, now this one is exciting to me. I had got a few off this tree before but they had problems by the time I got to try them, so these are my first really healthy, tree ripened ones. HOLY COW are they good. You know, I always sort of felt like these were sort of a gimmick- ie people mostly grew them because of their shape . Well, the shape is unique and fun and so on, but let’s get past that and talk about these for their taste and texture-compare them to other “normal” peaches. That is where these peaches blow me away. Not for their unusual shape, but for their incredible taste. They are one of the sweetest peaches I ever tasted- even for a white. And of course they are lower acid, which I love even though many do not. I should also report that my tree had a very heavy fruit load-even after I thinned them I left more than I should and still got good sized peaches. Bugs like them more than others, but that is typical for white peaches at my place. Overall, I just couldn’t be more happy with this peach and I’m shocked that it has nothing to do with its shape!

Another tree I had tried just a few from last year but had to pick them early last time is Yumm Yumm nectarine. Hard to talk seriously about a fruit called Yumm Yumm (who named these things!?? haha but that is what Gurneys called it. Its a good white nectarine, but some things that most of you may love are a bit of a turn-off for me. In spite of being a white nectarine, it had a lot of acid and is fairly sour. But in a good way to most people I’ve shared it with. Most white peaches/nects are fairly subdued but this has a VERY bold flavor- you know when you are eating it! They are on the small side but my tree carried a huge load. The small size is likely from me not thinning enough. In many ways Yumm Yumm is more similar to a yellow peach in taste than a white. But overall its a good nectarine and I;m glasd I grow it.

Pink Lemonade Blueberry. Now this one shocked me. I have grown in for 8 years and each year it barely produces. I’ve read many of you say the same thing. Those it has produced in the past were small but tasted pretty good. Then this year, for the first time ever, this pink blueberry set a huge crop and they are larger than ever before and taste spectacular. I have no idea what was different this year or if PL just takes 8 years bring in a good heavy crop of larger berries that taste great, but that is what I have this year!

I have a few other fruits that have set fruit for first time so if animals don’t get it first, I will add to this list. Meanwhile, I look forward to any comments from those who have the above (or just have an interest in them). Thanks

I have eaten Saturn before, and they are indeed very delicious. If you did like them, I strongly suggest that you try growing Arctic Star (early season), Emeraude (mid season) and Zephyr (late season) nectarines! For a low acid yellow nectarine Honey Blaze does well in South Carolina, so I presume it will do good where you are. I have all these and can send you scions in the winter.

I would keep a close eye on that donut. They are notorious for brown rot and I actually took mine out because of it. Aside from that, they are super delicious.

I have no idea what was different this year or if PL just takes 8 years bring in a good heavy crop of larger berries that taste great, but that is what I have this year!

Our PL was also bigger than normal and was all my grands favorite this year. Picked the last ones about two days ago.

Kevin,
Can you post some picsof Morris plums. Honestly, I’ve never heard of it.

As requested, some photos of my Morris Plums. The white stuff is spray residue-captan I think, so disregard it. Also these plums are larger than they appear for some reason-even when you see my hand it isn’t good perspective. These are racquetball sized if you know what that is (bigger than golf ball). I tried to show the fruit load on the small tree but I failed. Just take my word for it, the tree had a LOT of fruit.

These are amazing plums. I just don’t know why they aren’t more common? 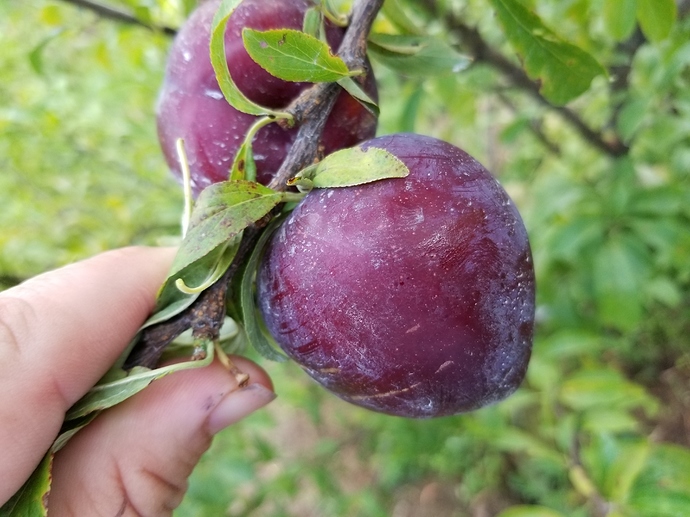 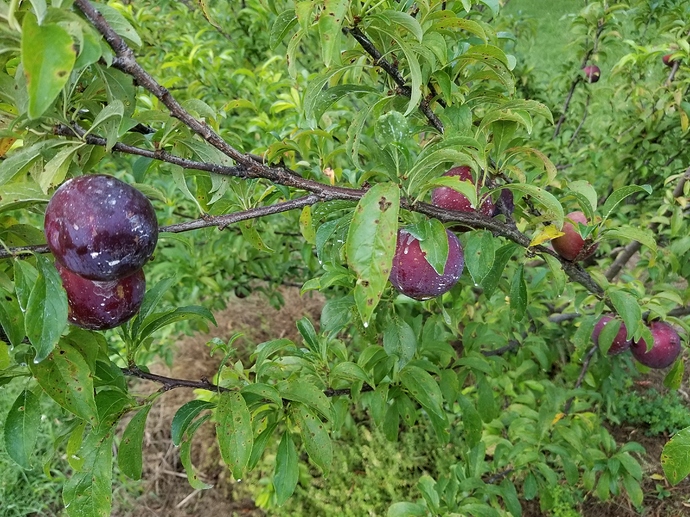 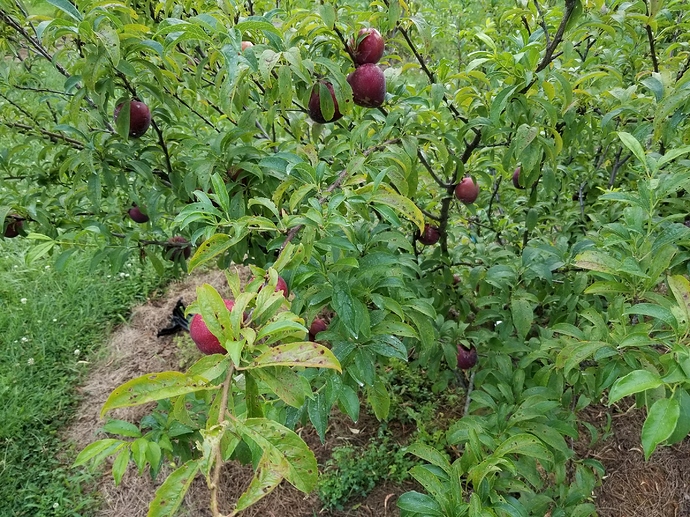 I don’t think I have ever had any plums that big. Nice to have large tasty plums.

They really are big. The only other plum I grow that gets this big is Bruce, but I don’t like its taste much at all. It has that really strong “plummy” taste that I have no idea how to explain but I don’t like it. But they get this large. Bruce is more of a pinkish/red, whereas these Morris are a deeper blue/purple. And taste MUCH better- just wonderful! The descriptions I read say they have crisp flesh but I leave mine on the tree until they get soft- and they are soooo juicy when they get soft. Again, this is a plum I don’t understand why isn’t more popular.

Well I hope pink lemonade doesn’t take that long to mature! I have a plant coming to me, estimated to ship late August

just about time for fall planting. I guess available means backordered through this company, probably because of the COVID gardening boom lol. I will probably put it into a large container to root a bit, then over winter it in the bulkhead to my basement with the rest of my container garden.

I wish you all the luck in the world, but I’ve had 7 bad years with Pink Lemonade and I’ve read countless stories that are the same. They just don’t seem to be very productive. But, something worked out this year for me and Bill both so hopefully you’ll get better results than most people. Good luck!

Two Plums that I’ve seen mentioned in a number of Southern nursery’s stock are Morris and Bruce.bb

That is interesting. Maybe that is why they have done so well for me. I’m not crazy about Bruce’s taste but it always produces a lot of large, nice plums. Morris seems to be doing the same thing. Perhaps they are just well suited for the southern climate? I also have a few of the Auburn plums but they are too young this year. We’ll see if they make good southern plum trees for me?

I can only remark on my own Morris and I am a big fan. It has not shown any black knot at all in spite of black knot definately existing in my orchard on some trees. Now leaf spot issues either. As with all stone fruit in my area, it certainly is a challenge with insects. I already gave you my spray regiment including what I use and when, and Morris is part of that. As a reminder, I spray once in winter (copper, oil) then starting a petal drop I spray every 10-14 days until 2-3 weeks pre-harvest. You have the list of things I use on those sprays