Very rarely do I plant a fruit tree having never tasted the fruit. Our local farmer’s markets have incredible selection, but I’ve never been able to find a Spice-Zee fruit being sold anywhere.

Based on the great reports from backyard growers here in So Cal and from Tom Spellman at DWN, I went out on a limb this time: 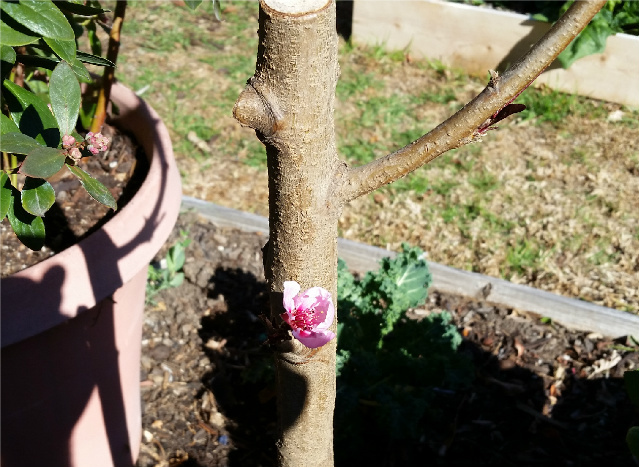 Clint, this is my most favorite stone fruit. It is exceptionally good in my climate, which is pretty similar to yours. I think you’re going to just love it. #noregrets.

@hoosierquilt, your’s is one of the recommendations that I considered.

So far I can say that the dark purple leaves and bright pink blossoms are stunning as it comes out of dormancy.

Well, I have to credit Fruitnut for suggesting this interspecific for my climate way back

And, he was right, it is really, really good for me. Plus, you have the bonus of a very nice ornamental tree as well.

In my environment it is not that good, it’s OK. It also might be me as I like acid fruits the most. Compared to Arctic Glo I found it extremely bland. Arctic Glo has very high acid (and sugar).
I’m going to leave one scaffold on my tree and graft other cultivars unto it.
I want to get Arctic Jay sometime too as that is another acid fruit although not as high as Glo.
So far the highest acid fruit I have tasted is Indian Free peach. Well stone fruit. Currants, raspberries, Cornelian cherries and tart cherries have high acids, citrus of course too.

Mine is on citation and the plum part seems to rule as it doesn’t limit size at all. The tree grows crazy fast.

In my environment it is not that good, it’s OK. It also might be me as I like acid fruits the most. Compared to Arctic Glo I found it extremely bland. Arctic Glo has very high acid (and sugar).I’m going to leave one scaffold on my tree and graft other cultivars unto it.I want to get Arctic Jay sometime too as that is another acid fruit although not as high as Glo.So far the highest acid fruit I have tasted is Indian Free peach. Well stone fruit. Currants, raspberries, Cornelian cherries and tart cherries have high acids, citrus of course too.

I don’t find Arctic Jay to be high acid. In fact I’d say it’s more like Arctic Star and the other low acid Arctic members. Arctic Glo was very high acid, too acidic for me. But my system concentrates both sugars and acids. And I’d agree with you on Spice Zee. The tree is more impressive than the fruit

I don’t find Arctic Jay to be high acid.

It’s balanced though, and here so is Arctic Glo, Indian Free though is very acidic. Probably due to the environment here. It ripens late so has to ripen in cool temps not favorable to sugar production. Jay does have acid, it just has a ton of sugar too.

From the DWN descriptions
“Taste test winner. Very attractive, firm, freestone fruit is richly flavored, with a balance of acid and sugar.”

The acid makes it rich. That’s why i like acid fruit, not really the tartness (though I confess I do like that) when cooking I add sugar and the tartness goes away but the richness stays, acid fruits are never insipid like low acid fruit can be IMHO.(certainly not all though, some are very rich too!)
I know you like blueberries a lot well when canning you don’t need to add anything. No lemon or citric acid for preservation (a pH of less than 4.6 inhibits botulism growth) Blueberries have an average pH of 3.3 an extremely acidic fruit.
http://www.engineeringtoolbox.com/food-ph-d_403.html

Tomatoes are borderline so when I can sauce I always add lime juice. When i use it to cook, I grate carrots into the sauce to remove acidity. It works really well too!

Mine is on Citation. A popular rootstock for us out here. And my tree is pretty vigorous, but not overly so.

Any idea of the hardiness? I’m tempted to put mine in the ground but not sure it will handle subzero temps.

Mine is just struggling to get to 5 feet. 2 years in the ground, hopefully this year it takes off. All others on Citation are reaching for the skies!

Any idea of the hardiness?

Mine barely made it through the polar vortex in 2013-2014 winter the main trunk died to just above the graft. Some tip dieback the next winter but not bad, although most fruit buds were dead. I got 8 nectarines. This winter is mild I expect a full crop. Well minus what I cut off. I would say no in zone 4. I’m in 5b/6a.

I picked one up at Raintree,2-3 years ago and it looks like theirs comes on Lovell.The description that bleedingdirt gives about his tree,sort of describes mine. Brady

Good to know. I’ll keep it in its pot. I had a few fruits last summer off mine, but the squirrels got most of them. Excellent for sure. I thought maybe being part plum, it would have some hardiness…i guess not.

Well maybe I got unlucky it did make it through last winter, no dieback on scaffolds, it got down to -16 one night, but the year before we had a sustained cold, not really last winter. I think it would be risky, but may make it?

Mine is on Lovell but hasn’t fruited yet. Lady year it was most vigorous tree.

Nectarines grown on Citation tend to be semi dwarfing. That’s the reason
yours isn’t growing so much. Plums and pluots will grow to full size on
Citation. Obviously the nectarine part is showing dominance and is reacting
to being on citation.

My Spice Zee is on Nemaguard, which is a winner here and pretty vigorous. My Arctic Star is also on Nemaguard. The nurseryman where I get most of my trees said that DWN is phasing out citation for peaches and nectarines. So they are definitely listening to backyard growers, and input from nurserymen.

Nectarines grown on Citation tend to be semi dwarfing.

I’m not seeing that on mine. two years ago it grew 7 feet in one short Midwestern season. I figured it was because it is not all nectarine but part plum. I have Indian Free on Citation and it’s just as old but only 4 foot tall. Spice Zee is 8 feet and so it will be whittled down some this year.
For me Lovell is the best rootstock here. Others like Bailey and Guardian are good too. So I have heard, I don’t have those rootstocks.

Spice Zee has had a lot of vigor for me on more than one rootstock. It’s probably more vigorous than any other peach or nectarine I’ve grown. So I do think it has some hybrid and/or J plum vigor.