Newbie question on my bench grafts

Hello, I bench grafted 100 scions onto antonovka small rootstock. The vast majority of scions are growing and healthy, a small number either didn’t bud or the buds died but the rootstock has growth. Is it customary to just try next year to graft onto the rootstock that is still alive?

I used angled cuts and then joined with black electrical tape, when do you recommend cutting the electrical tape? I think I read that black color can cause issues due to direct sunlight and heat, I do have some white tape I can use to cover if the tape has to stay on into the timeframe where the solar activity really starts escalating (I’m in W. Oregon inland from coast 40 miles).

the rootstock was only 30 cents each so I thought I would try it for fun I have a field that I intend to plant them in in a year or two (planted in garden plot right now)…I wanted full size because of Elk around here, I have alot of of the apples that were Bud118 which I guess is more “commericial” for faster production, it seems the Antonovka takes too long to produce so is not used much anymore? I have great topsoil in the area I intend to plant that is black and 3 feet or so deep but then there there is a redder more clay like layer below it.

Sure just let them grow out this year and go back and graft them back over next year. They are probably a bit short this year to try again. That black tape will be fine just go back in a couple of months and cut them loose. I have some Antonovka growing and it will likely take 7-12 years to produce apples. If you bend the branches down they will produce faster but that would defeat the purpose of getting them above moose heigth level.

Thanks, 12 years!! hopefully I live that long…haha maybe I should have gone with emla111 (I think that was other option from the nursery). crazy that it takes so long.

I don’t think Antonovka rootstock apples take that long to bear. I have about 10 apples of various varieties on Antonovka which I planted 4-5 years ago. I started seeing flowers on some of them after 3 years, and at year 4 all but Wolf River have bloomed (hoping it will this spring). Certainly not a full size or production yet, but on the way.

So I would not be quite so pessimistic about how long you will have to wait.

Steve,
The small ones I got from lawyers nursery for 40 cents have taken 4 years to get to several feet here in Kansas. Standard apples under the best situation take 5-7 years to bear if they are two year olds when you plant them typically. Then the scion has an influence so something like honeycrisp you will be sitting at 10-12 years waiting for those to hit production. You might start getting an apple or two earlier. If it’s something that’s quick to bear you could see apples in 5-7 years in my experience. With fruit trees the first year they sleep, second year they creep, third year they leap. Keep in mind I’m talking no branch bending and growing straight up.

I agree that the longer figures are what one usually reads/hears. However both Fedco and St Lawrence (the nurseries where I bought the apples on Antonovka) say in their literature that 3-5 years is more typical. Pretty much what I have found. Even the Honey Crisp produced a dozen or so apples at the 4th leaf year.

Granted, these were 2 yr trees I planted, 3-5’ tall and 5/8" caliper on average. So they are quite a bit bigger than new bench grafts. No doubt you need to add a year or two for those bench grafts to get up to the size of the trees I planted. Still I did considerably better than the 7-12 year figure. And at 8300’ in the Rockies, I don’t think it was my favorable growing conditions…

I can only say that’s what prarie spy took here was 10 years for one and 12 for the other. A very long wait. Our soil is heavy clay / loam so don’t get me wrong it’s poor soil. You are likely watering a lot and I do not have the water to give them unless they need it. I have over 650 trees in the ground so I can’t water them all like I would like to. I don’t doubt what your saying but I suspect it took you a lot of TLC and there may be differences in Antonovka rootstock as well. Here are some I got them from Lawyers Nursery three years ago so keep in mind this is a four year old and it’s 4’ tall. It will double in height in the next two years and will be producing 1-6 years after that depending on the scion I put on it. That’s with me grafting it this year or next. 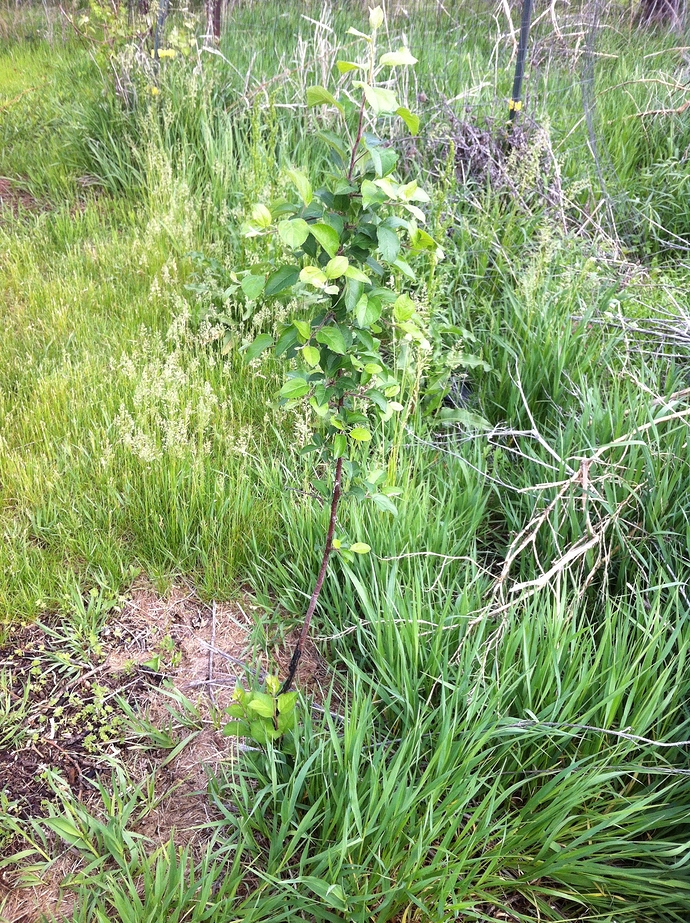 Congratulations on your grafting success! I highly advise trying parafilm next year. Electrical tape is difficult to remove without taking off some bark. I don’t think the black color is an issue. It will be shaded by new growth soon. I would wait about six weeks then make one or two vertical cuts threw the tape with a razor. This will allow the trunk to expand and the tape to be slowly removed a few weeks later.

thanks, I am real happy most took (I grafted gravenstein, King, a greenish/yellow late ripening apple that my grandpa grafted in the late 60’s he found in a field, and some honeycrisp from a tree I planted 3 years ago (it seems like the honeycrisp was late to bud and those are the majority of the failures I have), it was my first time grafting and I used a long angle cut but didn’t use a “cleft” as I had a hard time having the wood line up properly with the clefts, without the clefts I had them perfectly sized and touching seemlessly.