Can somebody recommend a late season blueberry for North-East? I have three bushes growing in a row on 9’ bed and I do not know their names. They all ripe at different times - early, mid season and late. The first two I like - early one is large and very sweet, mid season is somewhat smaller, but has a great sweet/acid balance. The last one to ripe I would like to replace. It sets a lot of berries, but they do not really size up and even blue ones are somewhat dry. They also ripe very uneven - if you wait until at least half of the berries ready in one brush, the first to ripe become dry. The only way to pick it is couple berry from a brush in a time. Can anybody recommend the better late variety for me? I am kind of concerned to plant small bush near established ones, but I think I will plant it in container, keep it on open sunny space for a season, then overwinter by digging whole container in the veggie bed for winter and keep another season in container. Hopefully it will be big enough by the end of second summer, so I can plant it in the ground.

Have you looked at any of the double/fall bearing varieties? My dwarf perpetua bush is about to ripen the second crop of the year. I wouldn’t say it’s an excellent tasting berry but this is my first bush and I have a few more on order. Sweetheart is also double bearing.

Here’s my perpetua bush today, this is a dwarf variety from bushels and berries, I got it in a 2gal container this past spring. 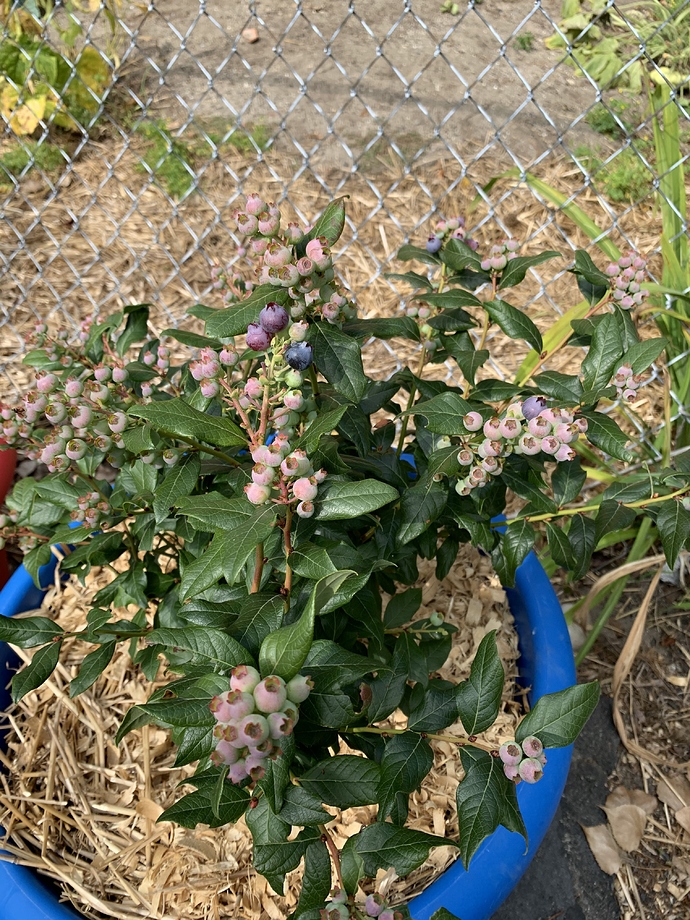 I am afraid dwarf in my set up wouldn’t work - I have two other bushes close by and they are about 5’ tall, they may take over the dwarf

. I’ll up pot it when it gets bigger, but apparently a 24” or a half barrel would be about all it would need.

Like Brady says- Elliot is listed as the classic late bloob. I haven’t tasted it yet. Alan used to talk of its reliability. I had one in a pot, but it died one dry sunny summer before I could plunk it into a permanent home.

I have 3 plants of ‘Aurora’…purchased over past 5 years from Burnt Ridge. I do notice One Green World has them.
Later than Elliott, larger berries, 3 or 4 pickings, dark blue-black and not as sweet as some…a little odd taste actually.
zone 4 hardy apparently, and no cracking if they hang on the bush awhile.
Not for machine harvesting…but if you want blueberries until frost this is the one.

Season extended if planted on north side of house.

Elliot is a favorite late season bb. I am in Massachusetts.