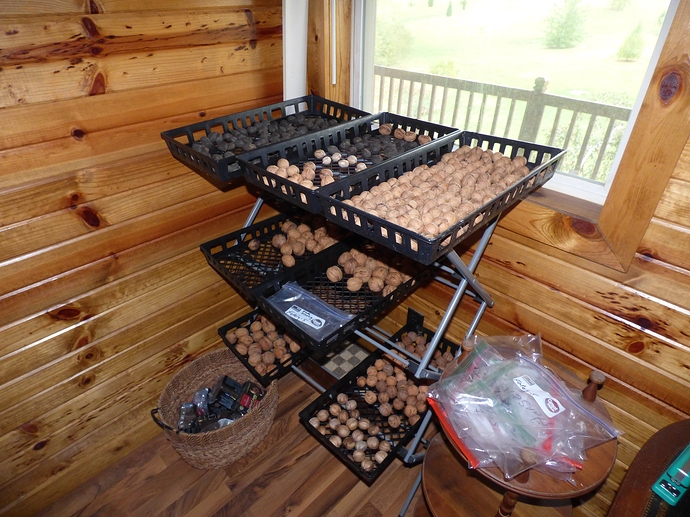 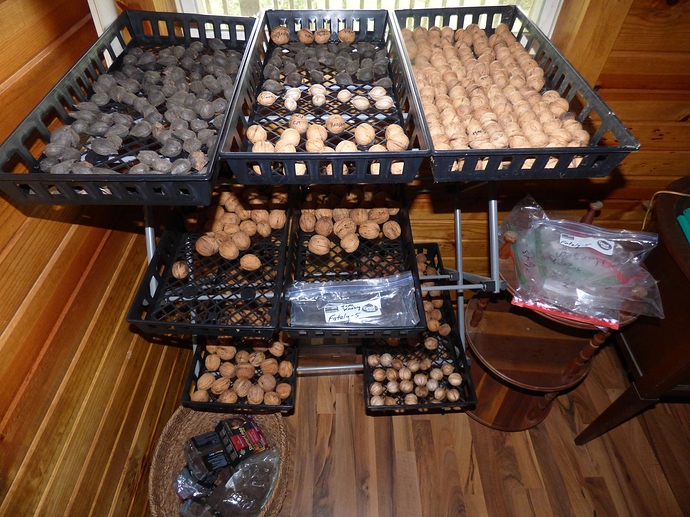 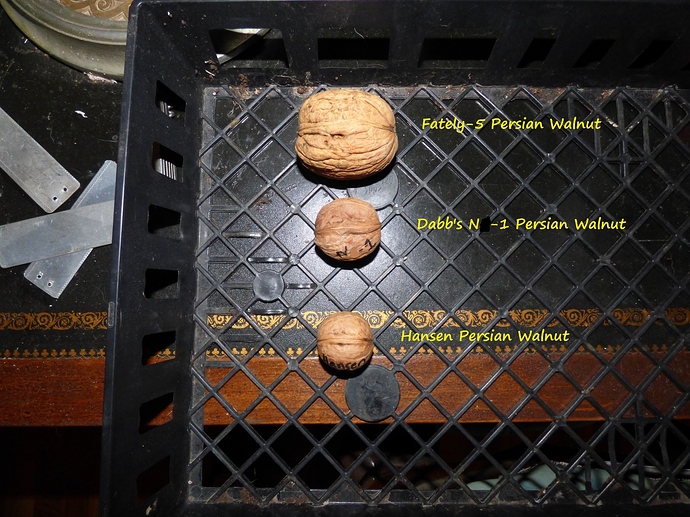 The size of the Persian nut looks huge! What will you make with them. Do you get Black walnuts too?

It is huge. It’s a monster.

My Dad and I crack nuts all winter. This is round 1 of nut gathering. We both have several types of nut crackers. Some real heavy duty and others medium or light.

I eat nuts when I feel like it, however my Dad eats them every morning with coffee.

That Persian should be grafted by anyone interested in it on this group.

I’ve met so many people who have never eaten a hickory nut. If it’s not in the grocery store, they don’t even know it exists.

These cultivars crack so beautifully, Steve. Another thing, I saw shelled shagbark on ebay selling for over $30 a pound last winter. And, if you’re a fan of pecan pie… hickory pie is so much the better!

I’d like to hear your comments on heart nut

We’ve been picking up a lot of pignut hickory nuts down by the road next to our mailbox over the last couple weeks. They come in a big green husk that is easily separated from the actual shell. We tried to break one open and it pretty much shattered in many pieces. I managed to pick out some of the meat, and it had a surprisingly sweet taste to it, with a little bitterness. I was expecting it to taste like a black walnut, which I dislike because of its strong bitter flavor, but liked the little bit that I tried of this hickory nut.

I read online that these nuts need to sit out in the sun for a week or so before trying to remove the meat, as it should separate easier from the shell. We have maybe 3-4 dozen right now. Every day I go down and get the mail, I take a bag with me and gather some that have fallen. Anyone know how to properly crack one of these?

Here is a pic of them 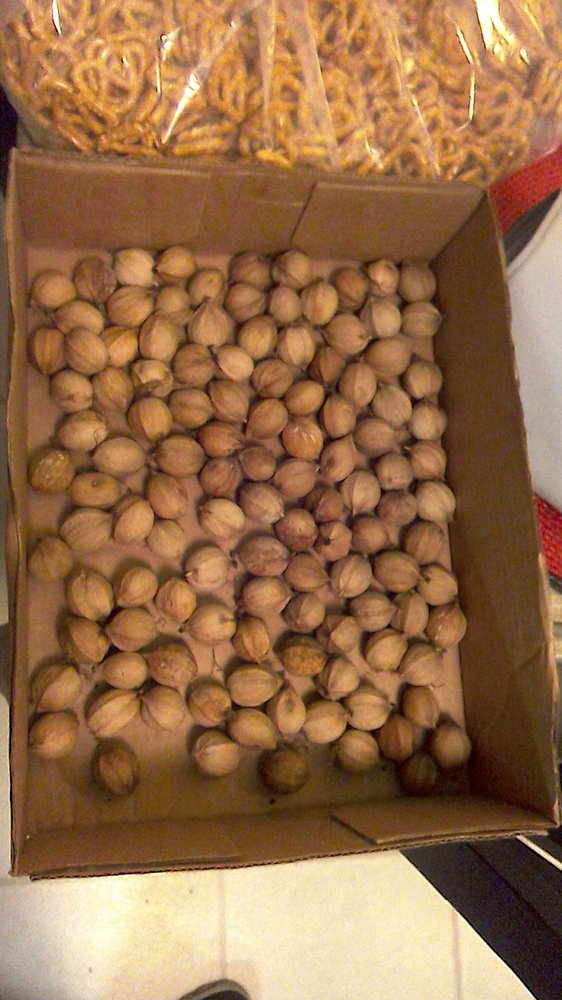 My friend has dozens and dozen of grafted black walnut cultivars. I’ve collected them past years but they’re so messy to extract the nut from the gooey husk that I stick with heartnuts and Persians now. A heartnut is non-messy and has a lighter flavor than that of a black walnut. I think they’re off the planet delicious. I can eat black walnuts but not too many at a time. Heartnuts on the other hand are a much more mild version and you can eat one after another. The other thing with heartnuts is you hold them on their edge and tap them with something and the shell separates in half easy peasy style. @IL847

A great grafted black walnut is selected for the same traits as other nut trees: ease of cracking (shell thickness); ease of kernel extraction (especially full halves that fall out extremely important); and of course taste & size;

Last winter my friend and I filled several garbage containers the size of those cities issue to citizens as well as many buckets and various size containers.

@subdood_ky_z6b Here are directions that came with one of the nutcrackers I own describing specifically how to crack hickory nuts. The best nutcracker on earth is ‘The Mr. Hickory’. I even used this to shell Prunus mandshurica pits I bought from Sheffield’s, recently. You have very good control with this tool. 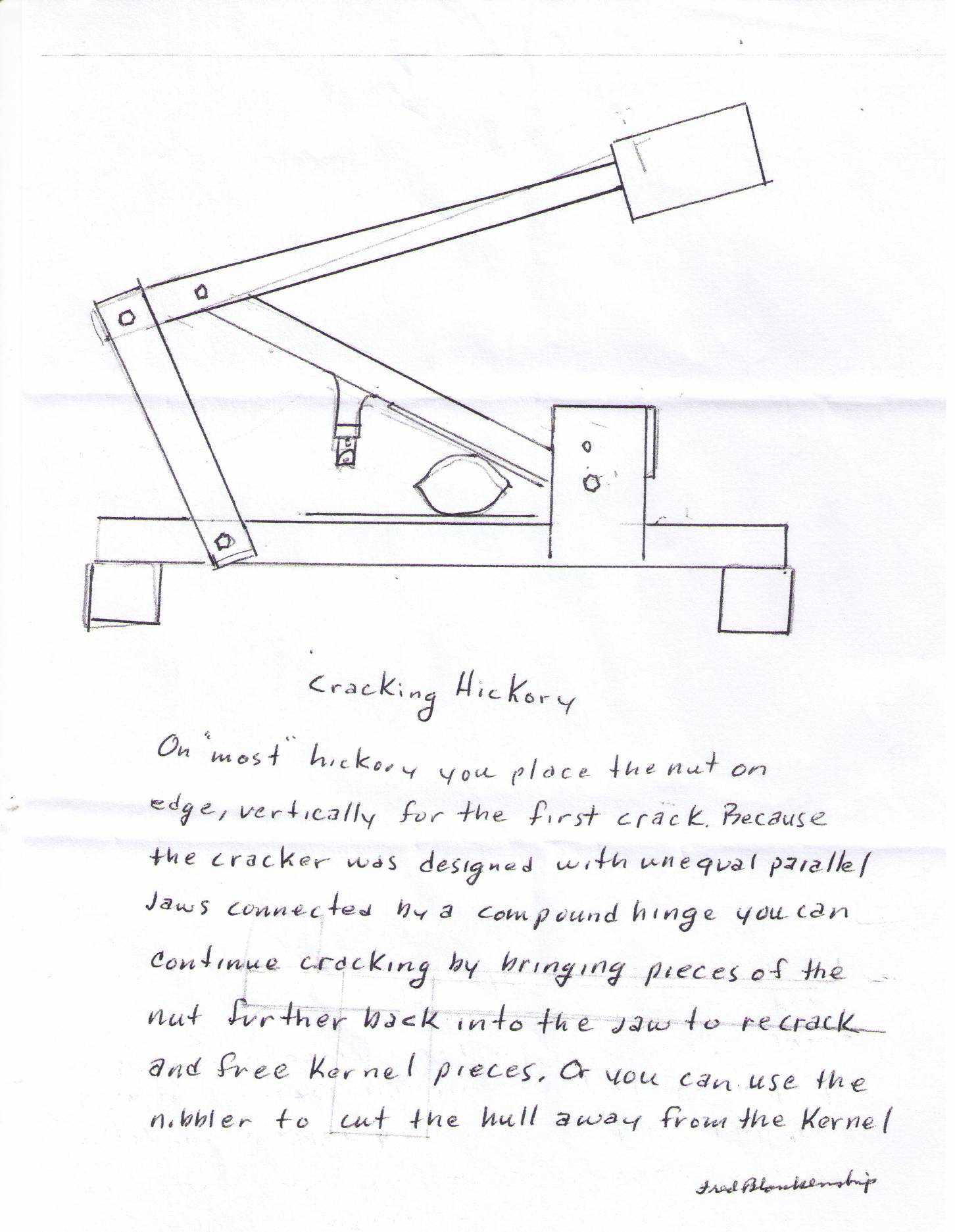 Here’s my friend… also our pawpaw cultivar introducer Tyler Halvin holding his ‘Mr. Hickory Cracker’. Some of you have his ‘Halvin’ pawpaw. There’s also a ‘Halvin’s Sidewinder’. Good guy I enjoy talking to. Looking forward to meeting him in person somtime. Tyler has thee best collection of Hickory and Hican nuts in display cases probably of anyone on earth. That’s not an exaggeration. Every cultivar (nearly all that exist) he has them cut in half with a jigsaw, polished them up all nice and neat and coated them with varnish and into display cases. Each cultivar thus shows the free shelling capability of the shell interior. It’s more important that the free shelling capability of a selected nut allows for ease of the kernel to separate than the percentage of meat. Digging it out in pieces is for the birds! 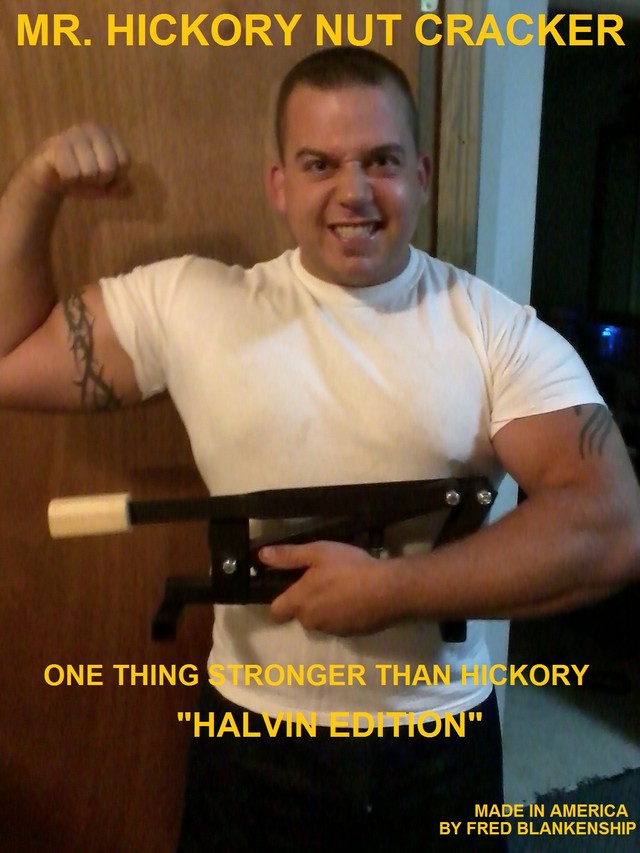 thanks for the input

I met a fellow who cracks his shagbark hickory nuts with a hammer, sounded labor intensive, but after I tried some toasted I could understand the motivation- really tasty!
There’s a small grove of shagbarks behind a historic farmhouse around here that I’ve started collecting a few from, I would appreciate any tips on processing these.
Some I plant t plant out after winter stratification.

@Barkslip, thanks for the cracker recommendation. I was wondering if there was a way I could do the task with a hammer, like if there’s a certain location to strike that wouldn’t shatter the shell in a bunch of pieces.

I dry them for about a month like above or on tier racks in my garage. Then they’re ready for consumption. Pretty much the same for all nuts, Jesse. Crack one after 2-weeks. If the nutmeat isn’t dry, wait another week and crack another. 4-weeks they’ll be ready though.

The easiest way is to plant them in fall in containers (now) and bring them into a greenhouse that’s heated to stay just above freezing all winter. That’s what I do. They’ll pop when they’re ready in spring.

If you’re going to grow them and don’t have a greenhouse, place the seeds fresh off the tree in a ziploc with damp but never moist media. If you see any weevil larvae (you will) investigate each nut to find the culprit of culprits that have split enough for them to emerge or maybe you’ll have overlooked a hole in a nut. Remove those nuts. Plant them in the spring. You’ll have much higher percentages if you don’t direct sow in the fall.

@subdood_ky_z6b there’s no control with a hammer to keep the shell or nutmeat from exploding. I’ll be doing a new video with that Mr. Hickory once my nuts are dry. You need to wait and dry the nuts like I am anyway… so hold off until then. I’ll post a video in 30-days and link you to it.

If you don’t want to invest in a cracker… there’s a line that runs across every nut called the suture. You want to strike the nut on that line. The above drawn directions I posted for you shows the nut in the correct position where the suture line is running across the top of the nut dead center.

OK, thanks. We are airing the shelled nuts out, so we’ll wait a couple weeks before we try cracking them. We also have lots of black walnuts on the farm, but I really don’t care for their flavor, but my wife does. I guess the drying and cracking process would be the same for those as well?

I have black walnuts from last year so I just made a video. It worked out well because the hickory I have don’t have dry kernels. So I got a chance to talk about that. 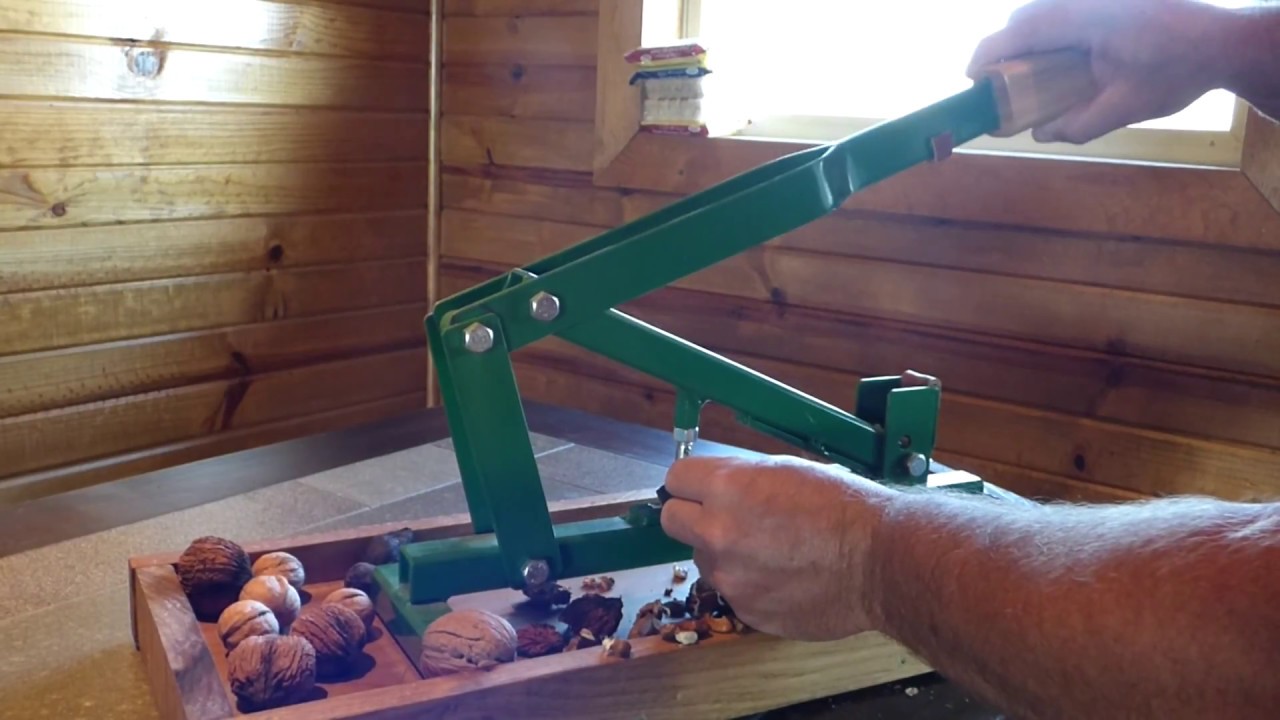 Do you grow hazels too?

No and I would have to investigate into to decide. Currently, I’ve not eaten a cultivated filbert. I would only grow a few plants if I did.

Any heartnut cultivar recommendations? Where is the best place to buy them? Are the “seedling” heartnuts any good?

I sampled 4-5 cultivars more than a year ago and didn’t write notes, unfortunately.

I recall the guy that sent them talking a lot about ‘Stealth’. He liked it. The guy that built that cracker for me. ‘Fodermaier’ is excellent.

Nolin River Nursery has the best dug nursery stock. He hires backhoe operators to dig his stock. You might be standing inside a hole to plant a 5-6’ tree but it’s worth it in my opinion. He offers various sizes and will be selling again next year. He was taking care of his wife for a year. And the year before he had a crop failure due to flooding.

Grimo in Canada has a lot of heartnuts. I was impressed with a hickory they sent.

I’d buy the grafted and not seedling if you definitely want a nut to fall right out. Hearnut, Juglans ailantifolia, can hybridize and you may or may not get a true heartnut.

I arranged a visit to Auburn’s E.V. Smith farm just east of Montgomery Alabama and walked through the pecan variety trial orchard this past Monday. I had a very enjoyable morning looking at several hundred different southern pecan varieties. A few were real standouts. Most were too susceptible to scab or did not fill the nuts or had speckled or off color kernels.

The pecan research work has been discontinued. They will no longer be performing variety trials. The existing trees will be maintained and some new trees for production will be planted.

On a different note, has anyone read this research from Mississippi?

There is still a planting of trees near Crystal Springs MS.