Hoping to start a series of these post, But by no means do I want to be the sole poster.

This time on Ok!!, So now what? Apios americana, aka, American Groundnut, Indian potato or hopniss because groundnut is also used for the humble peanut and African groundnut which grow in similar fasion.

Apios americana is a Fabaceae part of the pea family and is nitrogen fixing. Grows quite well in much piles as decaying wood mater is nitrogen robbing.

Well after 6 or 7 years in the ground and them pulling my apple and pear trees down to the grown and breaking branches I finaly decided now was a good time to harvest. The root system was extensive but easy as they like to say in the mulch between trees. Where they did go outside the mulch or down below the mulch line Im sure they will be growing back. Impossible to get them all. 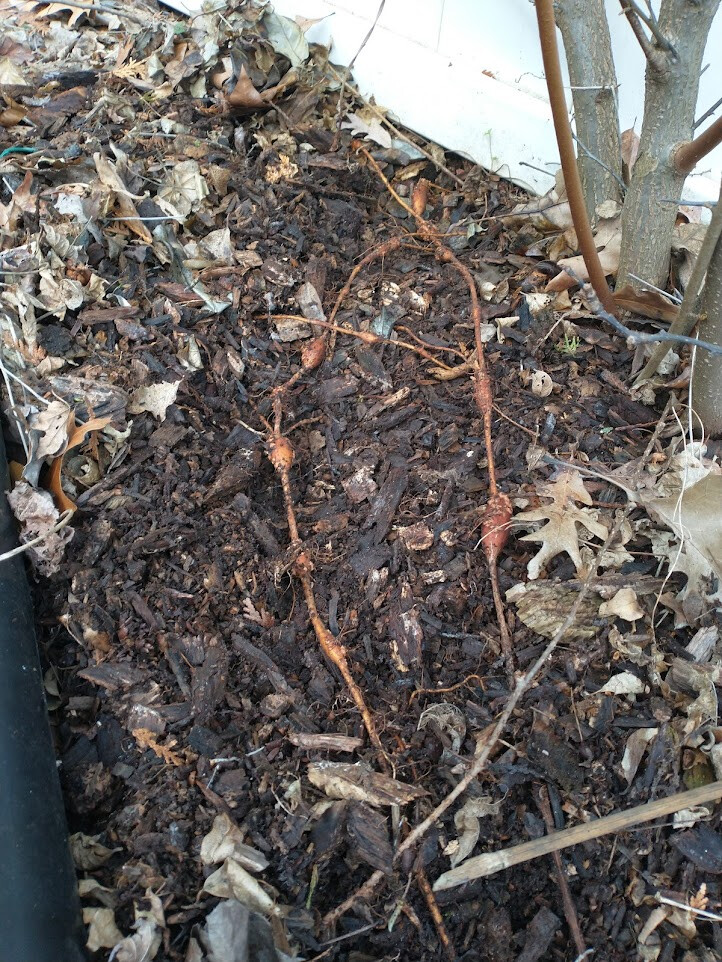 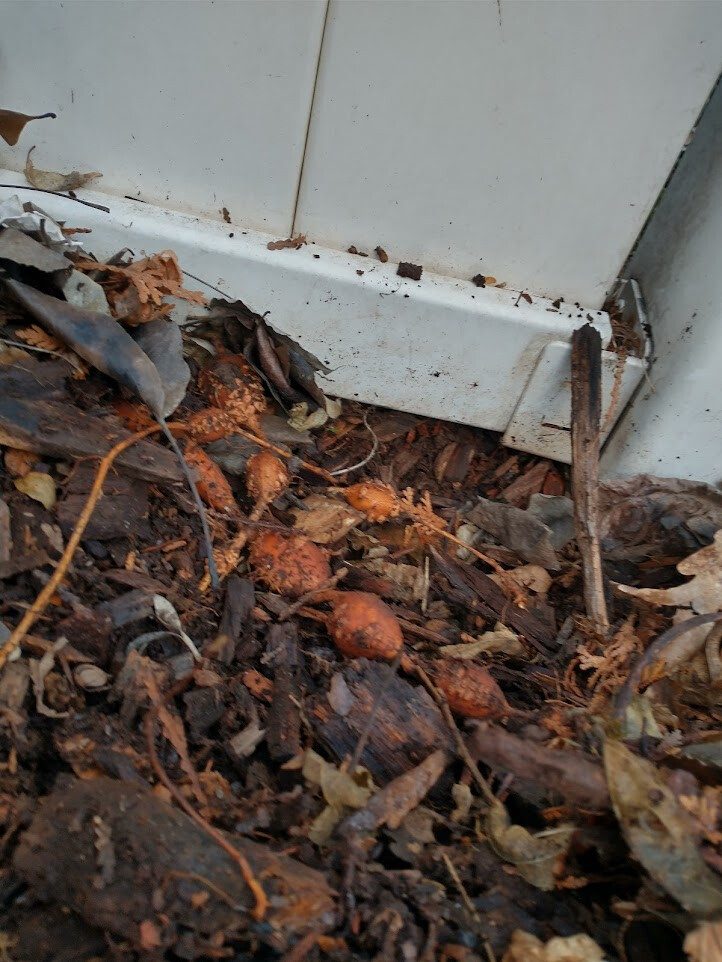 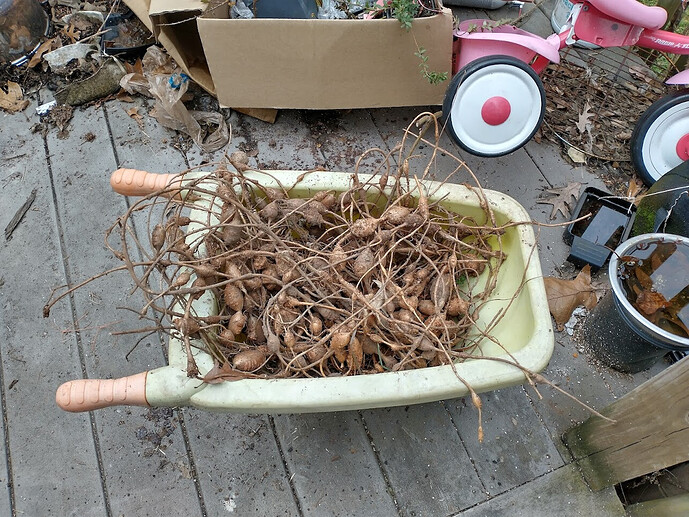 I have not cooked them yet but based on everything I read. I should just treat them like a potato and make some delicious mash.

The beans are also edible but small and more trouble then there worth.
/

I welcome some of the forums Apios growers to add there input.
@steveb4 @blake @bede @caesar @moose71

nice haul Caroll! i dug some of mine to share with a member on here. they are still quite small yet. maybe dig and eat some this fall. i also plan to spread them where the vines can climb my red pines.

Several years ago I got a couple of different varieties from Oikos tree crops. They’ve grow very large tubers in one season, often tennis ball size and rarely grapefruit sized. I still haven’t figured out how to cook them so I like them. They have a VERY strong “bean” flavor, so probably what I need to do is just mash them up and serve them like re-fried beans, which is my plan for next year. They also produce viable seed, so I’ve got a few new seedlings this year which I have no idea what to do with. If anyone’s interested PM me. They are free to pick up in the West Georgia/Atlanta area.

For prep I recommend simply washing and then boiling them whole. Do not cut them into individual pieces first.

After boiling the skin will peel off easily and the attached strings between the tubers can be pulled out along with some of the fibers that extend from the strings into the tubers.

Next, eat as is or process further into fancier dishes.

Just last week we harvested our LSU groundnuts - WOW. They had been in the ground for going on 3 years. We got an amazing 23 pounds of tubers from a tiny 8 ft long row, and left at least 1 lb in the ground to regrow. They are delicious and very nourishing food, better food value than potatoes. I am planting a lot more of these and also will be selling small plants in our nursery. If interested in buying tubers of LSU groundnut, PM me.

Which particular varieties do each of you have? I was fortunate enough to obtain Nutty #3 before Oikos closed shop. I almost lost it once or twice (I’m just coming off a neglectful period right now), and I managed to save some small pieces that have just sprouted now. I found a mummified tuber that didn’t survive my non-watering… about as big as a baseball! That’s one year’s growth.

So far, it doesn’t like to be abandoned in dry soil. It seems tolerant of clay (but I refuse to stick it in the ground just yet, in case I lose it for good). Otherwise, it seems to really like the local Puerto Rico climate. Doesn’t mind heat or sun, and grows very well on nothing but a tomato cage.

I think they should be slow-cooked… I seem to remember an article that warned of some strong reactions that a few people had, which may be preventable with long cooking times. If I find it again, I’ll post it.

No variety was given so I assume it’s just a wild form.

Also good to see you online. I here PR is suffering another man made disaster.

Yep, some kinda fuse blew up and left the island unlit. My hometown started getting light back today, all that’s left is my street for some reason (I’m out and about right now, so if it’s back, I haven’t found out).

I’m glad to be back. Usually my times offline mirror my neglect of the yard. Loads of ups and downs, mental health is no joke; though thankfully, neglecting my yard is as bad as it gets for me. Right now, I’ve been working the yard, so I’m happy.

Relevant Quote:
“I have to tell you, since I’ve been feeding people hopniss all these years, I’ve found out some of them will get violently ill after eating it.” It had never happened the first time someone tried it, he said, but it could happen the second time or even after many years of eating it. “Maybe you need to build up a certain dose of the protein. Maybe there’s more of this allergen in larger tubers. Or it might have to do with the growing conditions.” He estimated that as many as 5 percent of Apios americana eaters would be made sick at some point and, once they reacted, would become ill with every subsequent bite. “That’s the only thorn on this rose. Otherwise, it would be a perfect food.”

I’ve found out some of them will get violently ill after eating it.

The same can be said of many fruits. Figs send some people to the toilet. Paw Paw make some sick. Ect.

Ground nuts are legumes. Legumes do have a track record of causing allergic reactions for a small part of the population. Peanuts, and soy being good examples. 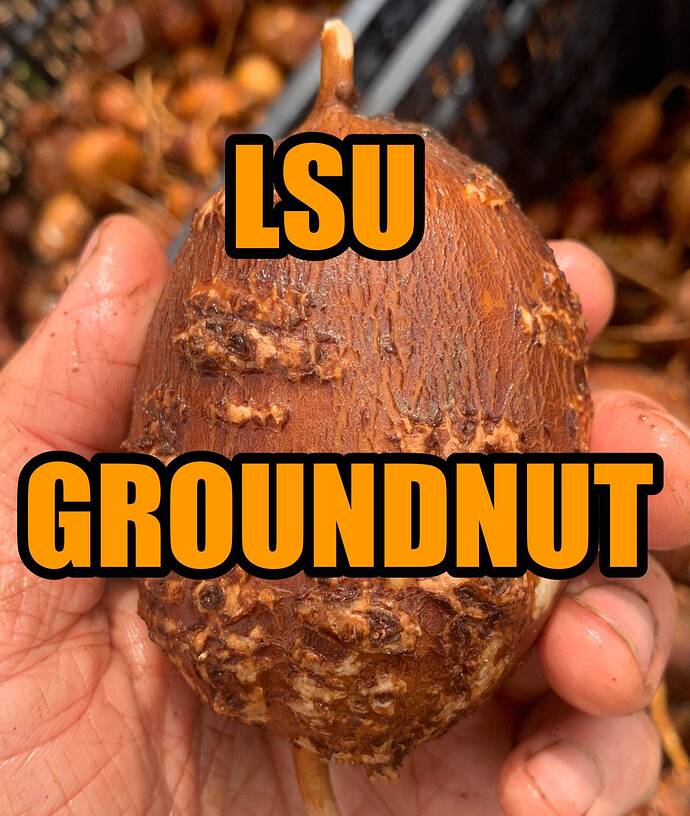 I have a small quantity available now