I’ve been speaking with a few growers and they tell me that their zone 5 & 6 climates are not that great for growing okra because they don’t get enough heat. They complain that their plants are not very productive. I find that a little strange. Okra doesn’t take very long to mature. Maybe 50-70 days. That means they would mature during July/Aug (the hottest months of my season) even if directly seeded into the ground.

I probably get warmer summers here in the 6B/7A than they do, but I’m still wondering if it’s worth it. Also… do you guys like them fresh? I can’t imagine taking the time to cook them just yet.

Yeah, that does sound strange. Okra grows just fine here in Zone 5 Iowa. The one time I grew it, it produced just fine. I have neighbors down the street that have 8’ tall okra plants by October.

But I think hardiness zones aren’t probably the right descriptor for okra. Zones 5 and 6 encompass maritime and Great Lakes influenced climates up to Maine and the UP and lower parts of Michigan.

Growing degree days are probably more important for okra. But I cannot find a good whole-US map of those to make my point.

Do you enjoy them fresh?!

My mother, in the Scranton/Dunmore area of z6 northern Pennsylvania grows heaps of okra. It grows like a weed and is outrageously productive there.

I cannot eat it unless it is cooked down in a stew or roasted dry in the oven.

When picked fresh, or only cooked for a brief period of time, it remains SLIMY. I think it is gag-reflex disgusting in that state, but others seem to like it. It is hugely popular in the Deep South.

Do you enjoy them fresh?!

No. Yuck! Only fried, in soup, and in gumbo, especially gumbo.

We grow it up here in Minnesota every year, it grows fine

My kids and wife eat it raw it’s crunchy not slimy. I like it boiled just a little, maybe blanched. It’s slimy then but fantastic.

I am in zone 6 and enjoy fresh raw okra. I agree with Mpigg- not really slimy. The slime factor is greatest when you cut and cook the pods (cook them whole for less slime). I had 20 okra plants this year and I could not eat it fast enough from July through September. The down-side is that it is just about impossible to give away your extra okra in the northern states (unlike tomatoes or zucchini)! “Burmese” was really good variety for me. Burmese stay tender even when they are a foot long- but I would recommend eating them at 4". Raw, pickled, fried, grilled… all delicious!

Whelp. I’m going with them this year. WIsh me luck!

When we tried to grow veggies in our West facing garden in North TX, okra was the only thing that would flourish. Everything else would just get fried by July.

But, when we moved up here to KY, we tried to grow it, and it did nothing, just got a foot tall. But, I think it was the poor soil more than anything else. We’re amending our veggies plots this year, so it ought to do better this time.

I grew up eating it fried, and pickled in OK. Nice to have some fried okry with fish. I have eaten it in jambalaya or gumbo, it’s usually just sliced and cooked with everything else. Not too bad in that state. But prob best when fried, but isn’t everything??

My conditions are probably a bit harsher than yours, but I have never been able to grow good Okra. Outside was a total bust, but our nights are cool (40-low 50’s) all summer. I did try it in my GH but even there it wasn’t great (but did actually produce a few). I have had good okra crops years ago when I lived back east, but even though it was only an ag zone warmer there, the summer temps were much higher, day and night.

I completely agree. Okra grows very well here. We have hot summers. Here are the pictures of Jing’s Orange okra. It was very tender okra and very beautiful as well. Unfortunately I could not get used to the slimy taste, I wish I could. I think I’ll try it again this season. It was much better then Clemson’s spineless variety, which I also grew. 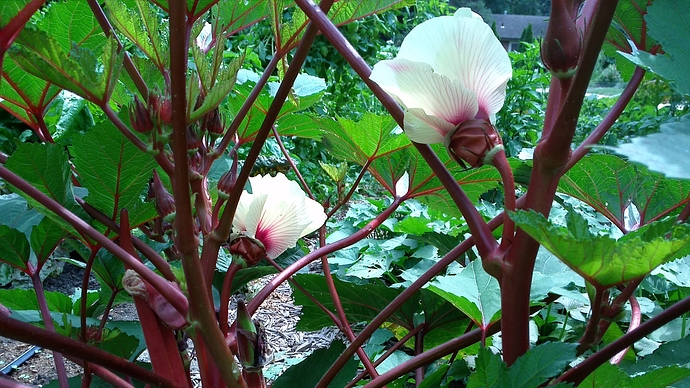 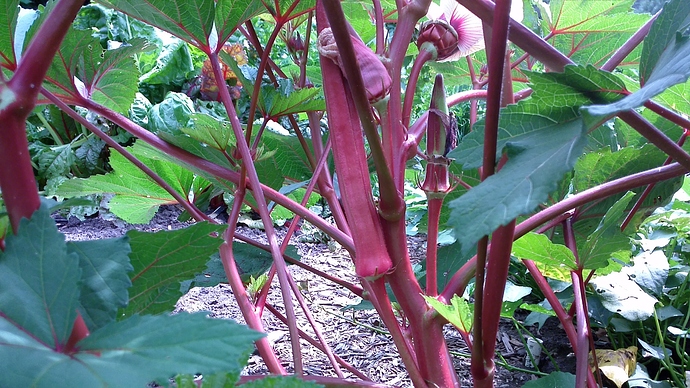 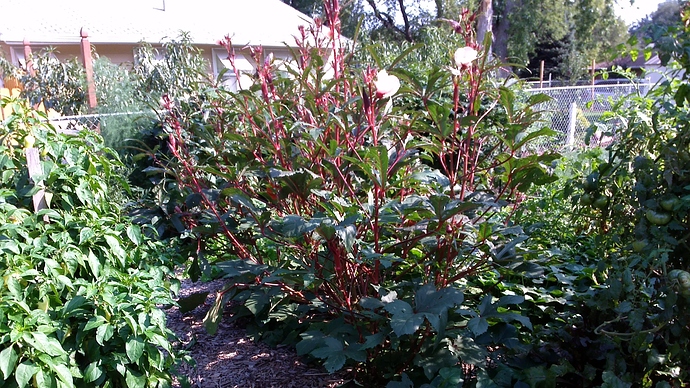 If you want to use okra in a “wet” dish you can rid it of the slime with this trick. Slice it about 1/2 inch and sauté it in a small amount of hot oil. As it cooks you will see the sticky substance come out and evaporate. Then add it to whatever. I combine it with onions and tomatoes and occasionally add some meat for a nice dish. The secret though is to heat it through until the slime is gone.

That okra is really beautiful!

They tell you nothing about summer temperatures

and sauté it in a small amount of hot oil.

I combine it with onions and tomatoes

just ate supper but for some reason hungry again, haha

That okra is really beautiful!

really is pretty! My only gripe about it is that it seems not as sweet as the generic green ones. Am probably harvesting it too late in maturity.

just ate supper but for some reason hungry again, haha

Oh my! You belong in the south where our evening meal is always “supper”!