Dan Bussey orchard manager for Seed Savers Exchange raves about the taste of Old Fashioned Limbertwig. Anybody else growing it? Limbertwigs gaining recognition slowly. Ron Joyner at Big Horse Orchard says they do well from mountain to coastal plain with good disease resistance.

Dan grows 38 cultivars of Limbertwig apples he got from great collector Joyce Neighbors. BTW Dan’s orchard so far has NO fire blight. Hard to believe that exists.

Dan also raved about taste of Belle de Boskoop. Anyone growing it in zone 7?

The Limbertwigs are also slowly growing on me, they put up with the heat and humidity extremely well. Black Limbertwig was a real treat this fall. I have only grown that one and Myers Royal but may try some more; White Limbertwig is another I am interested in.

Boskoop is one of my bad luck stories, its on its third root at this point. I hope to get fruit in a year or two. Its been perfectly fine as a grower, just bad luck on the stocks.

Lee Calhoun said one of his favorite apples (not just in Limbertwig family) is Red Royal LT. Jason who manages the Horne Creek Preservation Orchard in NC says Royal LT is his favorite.

I get the impression that a lot of Limbertwig history and some rare varieties were lost with the death of Henry Morton of TN, Mr. Limbertwig. This shows the importance of permanent preservation orchards like Horne Creek.

If anyone has an old apple catalog from Henry Morton I’d pay to have it copied.

Have had OFLT here for nearly 20 years. (Provided that it came, as labeled, from Lawson’s Nursery)
No FB issues, but it’s a dog. Don’t know that I’ve ever bothered to eat a fruit from it, after the first one I tried. The deer are allowed free access to any that it makes. I just haven’t gotten around to cutting it down yet.

Thanks Lucky- I’ll take a pass on OFLT given your experience.

It spurs up and fruits well in So Calif, but suffers sunburn on the fruit a lot and is dog ugly. Dense and sugary, not a lot of depth. We have a lot of better varieties ripening at the same time, I’ll give it a couple more years before pulling it out.

I never saw a “limber” limbertwig until visiting Old Salem in NC, here’s a photo. 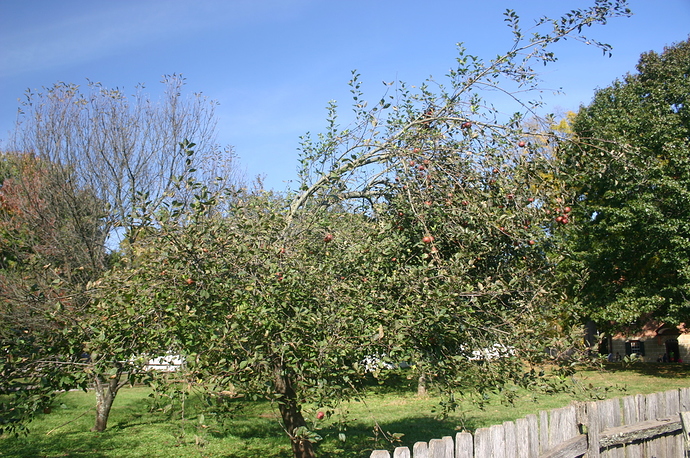 Hmmm. Wonder if it does better in cold climate - Dan at Seed Savers likes it grown in Iowa. Bad reports from Georgia and California.

Hi. My name is Casey. I am a new member here. I am growing both varieties in SW Washington (climate zone 8a).I haven’t had problems with scab or canker here. Fireblight is not an issue in this area. Old Fashioned Limbertwig produced its first fruit for me in 2015. They had good flavor, but I could have left them to ripen longer. Belle de boskoop has not fruited yet.

Casey- I like your choice of apples- what other apple varieties are you growing and how do you rate their taste? Boskoop sounds intriguing- I read it can take a while to bear.

Hey, Applenut…
Is that OFLT in your photo, or one of the many others?
Best I can recall… the OFLT here is a nondescript green apple, with lots of sooty blotch/flyspeck… don’t know that I’ve ever noticed it developing any significant red color; if your photo is correct, perhaps mine arrived mislabeled… wouldn’t have been the first or last I bought that weren’t as labeled.

Every apple has its purpose. I would use Horse, Bramley’s Seedling, Grenadier, and Lane’s Prince Albert for cooking, while the Limbertwigs seem to be sweeter storage apples. Russets tend to be denser and more strongly flavored.

Wow figgrower, nice list of apples. I have 2 two year old Black Amish on M7 and a Dula Beauty on M7 planted just this fall. Have you gotten any fruit from these varieties yet? and if so what’s your opinion on them?

Black Amish fruited for me in 2015. This was its first year, and I got four apples. I picked most of them too early, and they had a rather bland cardboard-like flavor. The last one was very good, mostly on the sweet side. Definitely not my favorite apple, but nice for a change of pace (maybe a 6 out of 10). Dula Beauty has not yet fruited for me (probably in 2016).

My favorite apples to date are Orlean’s Reinette, Egremont Russet, Ashmead’s Kernal, Gold Rush, and Roxburry Russet. Dula Beauty and Smokey Mtn Limbertwig have not yet fruited for me. I am estimating that they might produce in 2016. Red Limbertwig was grafted the same year, and has produced an abundance of small apples. I am hoping they will be larger as the tree matures. The tree may need to be more heavily thinned. Red Limbertwig is a storage apple, so it needs to fully ripen on the tree, and then hold in storage for best flavor. They were mostly sweet, but slightly more complex than Black Amish (maybe a 7 or 8 out of 10). Joseph, when well ripened, was a really good sweet/tart eating apple. It took a while to mature, and was a firmer apple. It seems like it might do well in storage for several months.

Thanks Fig for your taste reviews, look forward to comparing our yet to bear varieties next couple years.

figgrower, I posted my apple experiences here http://growingfruit.org/t/scotts-apple-variety-experience-summary-2005-2015 if you didn’t find that thread yet.

Caney Fork LT doesn’t seem to be a storage apple. Victoria Smokey Mtn, and Virginia have not fruited for me yet.

Fig- How’d you like the taste of Caney Fork? Tom Burford writes about “the distinctive limbertwig taste” that apparently can’t be put into words. I found a couple sentences buried deep in the internet reporting that Caney Fork was the hands down favorite apple of an elementary school given various apples at lunch.

I really liked Caney Fork after it was fully ripened. If it is picked too early, of course, it is relatively tasteless. All of my Limbertwigs so far are producing very small apples (probably due to the age of the trees). I’m sure that will improve with time.