This is very sad news and it’s not widely known An olive tree plague in Italy can teach us a lot about the pandemic | WIRED UK.

The Xylella crisis has been blighted by conspiracy theories and mistrust of scientists. The cure: information 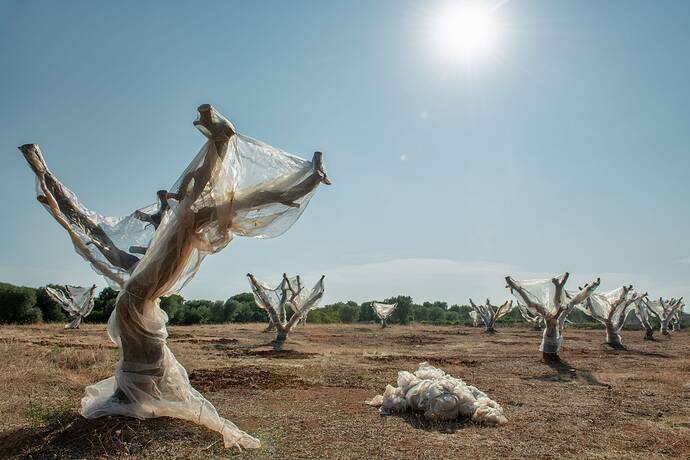 Xylellainfected trees in mesh quarantine. Much of the grove has already been uprooted. These plants will soon be next1600×1067 312 KB

Xylella-infected trees in mesh quarantine. Much of the grove has already been uprooted. These plants will soon be nextCAIMI AND PICCINNI

To make sense of the [infodemic that exploded in the wake of Covid-19]
(Coronavirus lies are going viral. It’s essential we all fight back | WIRED UK), you don’t need to go all the way back to the cover-ups and misconceptions surrounding the disastrous 1918 Spanish flu – just look to the blight decimating Italy’s olive trees. It was 2013 when the first branches began to wither on olive trees in Apulia, the “heel” of the Italian peninsula. Soon, whole plants would turn brown, dry out and die.

Today, olive trees keep dying in the millions, and the reason is something we’re all familiar with: an epidemic. The culprit is Xylella fastidiosa, one of the most dangerous plant bacteria in the world. It travels from plant to plant through the saliva of common spittlebugs, clogging the plants’ vessels and making them die of thirst. At present, it’s incurable.

The Italian media spotlight on the problem has dimmed in recent months, but the infection has continued to spread. “It’s a slow tsunami. We’re starting to see severe effects of the infection, even in areas originally spared in the south of the region, and it’s steadily spreading further north,” explains Donato Boscia, a phytopathologist and research manager for the Italian National Research Council. He directs the team studying the spread of the bacteria in the region and in 2013 was the first to discover the infected trees near the city of Gallipoli.

The spittlebug, which has been identified as one of the main carriers of the deadly Xylella fastidiosa bacteriaCAIMI AND PICCINNI

The economic damage is estimated to be at least €1.6 billion (£1.45 billion) in the Apulia region alone. If the disease spreads from Italy to the rest of the continent – like the novel coronavirus did in March 2020 – it could cost European farmers €20 billion in the next 50 years. In 2019, two cases were found in the Alpes-Maritimes region of France.

Following a pattern that has become familiar during the novel coronavirus pandemic, the Xylella crisis opened the door to conspiracy theories and the rise of anti-science sentiment. In 2014, alarmed by reports coming from Boscia’s team, the European Commission decided to eradicate and burn down all infected trees and those surrounding them to prevent further contagion. But, despite the evidence, many local farmers and campaigners did not believe the bacteria was really to blame for the withering.

Some believed the spread of Xylella was part of a huge plot to destroy olive trees and help multinational companies seize the region’s farming market, whereas others simply did not believe plants – that sometimes were hundreds of years old – couldn’t be cured using traditional methods, rather than being eradicated. The backlash pushed local prosecutors to open an investigation into the scientists and Boscia himself, accusing them of introducing the bacteria to the region. The enquiry concluded in May 2019, clearing the researchers. But by then the damage was already done.

Private homes’ olive groves aren’t regulated as strictly as farmland, and can act as a springboard for infectionsCAIMI AND PICCINNI

“I think clear, straight and effective communication from the authorities would have surely helped stop the most dangerous theories,” explains Boscia. In his opinion, the Italian government did not do enough at first to counteract the spread of false information on the topic, which ultimately led to the destruction of almost the whole olive growing sector in the region. “We saw the power of effective institutional communication in the fight against Covid-19. It is possible,” he says.

However, communicating in an emergency like a pandemic comes with its own limits. “The didactic, almost patronising tone of the institutional communications we have seen over the past few months cannot work at every point of any emergency,” explains Francesco Giorgino, a professor in Content Marketing and Brand Storytelling at LUISS University in Rome. Giorgino believes that this kind of communication, while very effective to obtain quick results and counteract the spread of uncontrolled disinformation, also comes with its own pitfalls.

These leaves are from a tree that showed signs of Xylella infection. Xylematic liquid will be extracted and tested in a labCAIMI AND PICCINNI

“One of the main risks is creating ‘supporters’ of one theory or another – which mustn’t happen,” he says. Clear communication is fundamental, but at some point it needs to give space to public discussion – while keeping a balance through efficient fact-checking and debunking. “This is not a match between scientists: decisions need to be taken by politicians after weighing all the options – and their consequences,” Giorgino says."

The Italians are accused of poor efforts to quarantine the infested areas.
But it is still possible to deliberately spread the disease to others; outside Italy, we may see a mysterious spread of the disease in various olive-growing areas.

I wonder what are the solutions to the problem; genetic modification?

Some trees are very old! Science is the solution but specifically what type I’m not sure yet. We have a limited time to figure it out.

Collecting germplasm of local varieties of Italy as well of neighboring countries and keeping them in a safe place seems like a logical option in anticipation of the worst. As well as political will and punishments against those who spread misinformation & the instigators of hatred for genetic modification if they take this direction, And strong support for researchs to find what prevents this bacteria from infecting olives.