Only 2 oranges on my tree this year. What's going on?

Hey there. I would love some advice on taking care of our orange tree. We planted this five years ago. I got it from a nursery, and although it had five oranges on it when when we bought the tiny tree, we went four years without a single orange after I planted it in the ground. Some flowers would come and get us excited, but then they would all eventually die. We’d had problems of leaf miners in the past and have sprayed for them, but year after year, no fruit.

This year, it looked like we were going to have about ten oranges, but the other eight tiny little green oranges the size of a pistachio magically disappeared, leaving only TWO! Not sure if birds ate them or where they went. It was weird and surprising. These two oranges look like they may be ready to be picked in the next week or two, I am guessing.

So, my question is. what can we do after we pick these two, in terms of pruning and fertilizing, to see if we can get more oranges for next season. We live in San Diego, California, a mild climate most of the year, but we have neighbors with huge orange trees that bare hundreds of oranges every year.

Also, would like to know if we should cut that low-hanging branch that you can see in one of the photos, even though it is getting pretty thick. My thought is that it would send more energy to the rest of the tree if it were gone, plus if it gets any oranges in the future, they would be sitting on the ground. Any advice would be greatly appreciated. The tree gets water every two days. I have been fertilizing it once a month usually February to May, then the flowers start coming on it, but they die. Do I need to continue the fertilizer all year round? Thanks again. 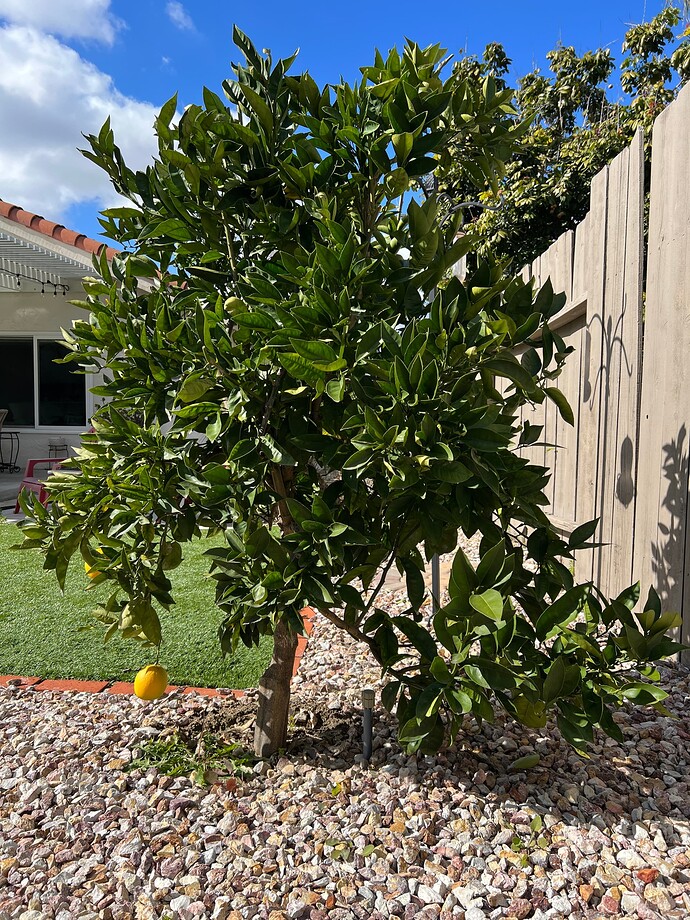 How are you fixed for bees?

There are several reasons this can happen.

My orange tree was always loaded with nary a single bee. I don’t think that’s an issue. Commercially they don’t put bees in citrus orchards.

The tree is pretty small for 5 years of age. Color looks good and grass is green so I doubt it’s a lack of fertilizer.

With grass that good looking I doubt it’s lack of water.

Maybe it’s just a bad tree. I’d replace it soon if it doesn’t start to bear.

That is artificial grass.

What growing zone and region are you in?

Also, my wife would never replace that tree. She sees it as a living creature, so she would rather have no oranges and it be a home for future butterflies than replace it.

could try grafting over some branches to different orange or even other citrus cultivars.

My gut screamed the same thing. What about buying the neighbor a six pack and asking him for some graft material from his productive orange beast.?

What fertilizer do you use? I wonder if there is lack of specific nutrients. The other reason that comes to my mind is the odd graft union I see on the trunk. Reminds me of @Marta’s blog 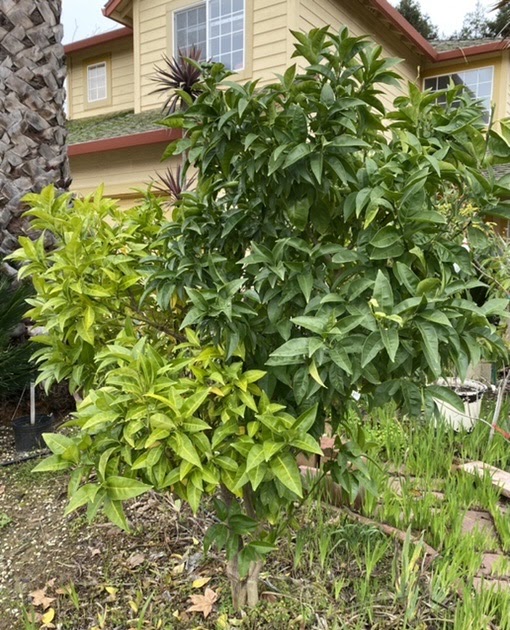 In this post I describe how to identify good and bad graft joint unions, and why joint quality matters.  As we select plants in nurseries, i...

My sister had a mandarin tree like that, no fruit for years. So decided to hack it to let more sunlight in the middle, the following year it had lots of fruit. Same method with a grapefruit tree. This is before I fertilized her fruit trees even.