I tried searching, but couldn’t find any threads on this topic specifically.

Any suggestions for what to grow in a very windy area? The wind really howls here, I’m on a low hill surrounded by flat cornfields for miles in every direction. I have some spots sheltered by old pine trees, but I’m just about out of those.

Avoid dwarfing rootstocks that require staking. And thin the limbs so wind blows through the tree and not around it. Subsoiling before planting would be good if your topsoil is thin (as it is on most hills).

I’m also in a frequently-windy location, and as @BlueBerry suggests, the rootstock is pretty important. I’ve had good success with MM111 for apples and Lovell for peaches. Young trees, even on vigorous rootstock, will likely need temporary staking until they’re established. I’ve used Tree-Mate-O supports with T-posts for that to good effect.

If your winds tend to blow from a particular direction most of the time, and your trees have an asymmetrical graft (like a bud graft), I’d position the trees such that the grafted side points into the wind. This image from Trees of Antiquity shows what I’m trying to describe.

Are peaches even an option though? I’d assumed that peaches would get beaten to a pulp or fall off if the branches wereshaken in a strong wind.

Is there a way to plant a barrier of some evergreens, like Thuja Green Giant? They grow pretty fast. Though you may need to stake them at first too. 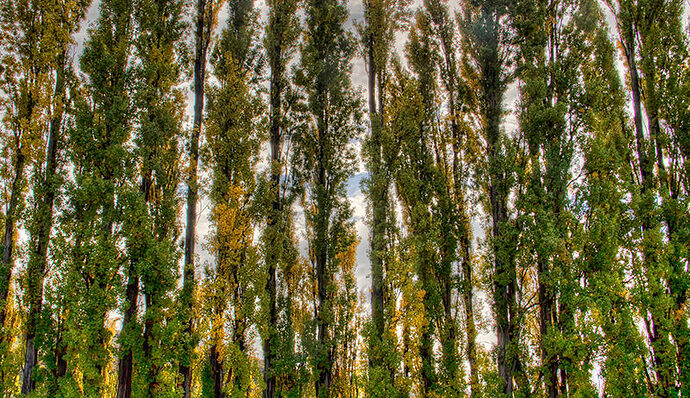 5 Great Trees To Use For Windbreaks - Hobby Farms

Create a barrier to wind around your home and farm, decreasing its destruction and making a more desirable living environment.

Are peaches even an option though? I’d assumed that peaches would get beaten to a pulp or fall off if the branches wereshaken in a strong wind.

I’ve grown peaches where the wind was strong enough in spring to blow off the leaves. But once the tree got ahead of that and the winds in summer dropped a bit peaches do fine. It’s plums and that size fruit that get blown off the tree more than peaches or apples. With plums the fruit hits another branch and gets knocked off.

Are peaches even an option though?

They are for me; can’t say for sure about @Bigdoug03. It’s possible that planting a windbreak, as @galinas says, would be worth the trouble.

We have some pine tree windbreaks already. I was kind of hoping there was some fruiting plant that was also a good windbreak. Has anybody used the a line of romance series cherry bushes as a windbreak? I’m not sure if they grow tall enough or not.

I have found that M7 rootstocks tend to blow over much more than 111, especially when trees start to bear heavy crops. I’ve often had to lift trees on 7 back up and crutch them for years before they became reliably stable. 111 is not immune to this, however.

Perhaps if you train the trees hard when they are young and delay cropping a bit they may be more stable in windy sites, but what commercial growers often do is stake trees with heavy electric conduit posts upon installation. They are a PIA to deal with when you are pruning as they are often not removed and the trees grow into them, but they do anchor a young tree well if they are driven deeply into the ground. An accidental swipe with a pruning saw dulls the blade instantly.

Conduit also is a cheap stake to use to coax straight trunks by taping trees tightly to them with electrical tape. Cut the tape and remove the conduit once straightness is established.

Are peaches even an option though?

We on occasion have 50mph winds, never saw any peaches fall off.

I live in a typhoon zone where we can get some extreme winds. Persimmon trees seem to be everywhere and survive quite well. I know it’s not uncommon for more sensitive plantings to see blue screen wind brakes put up on either steel or concrete poles.
I’ve had a garden for about three years on a windswept hillside that’s been through a few typhoons. I’m growing peaches, grapes, blueberries, cherries, and mulberries without too much wind damage so far.

I’m not sure where you’re located, but as mentioned, peaches are generally well suited to 6A growing zones.

Wind isn’t a factor for peaches, as long as they are kept low to reduce the effect of a tall “sail” so the trees don’t blow over. It’s very windy where I’m located (third windiest state in the union) and most of the trouble I’ve had with windfalls has been earlier in the season, or just at harvest. Some varieties are worse than others, but none are what I would call bad. Some flat peaches hang so well, you need a gear puller to get them off

Remember there are commercial orchards everywhere where trees are sprayed with airblast sprayers, which put out very high wind speeds. It shakes and whips the whole trees, and almost no fruit comes off.

This is good news! I thought I was going to be really limited, but it sounds like the wind isn’t such a big factor as long as you avoid dwarfing rootstocks and give the tree some support when young.

What about the inverse, is there anything I should definitely avoid in windy areas? I think pawpaw is the only one I’ve been specifically warned against.

What about the inverse, is there anything I should definitely avoid in windy areas?

I had a lot of problems with hardy kiwi, for what it’s worth, and eventually gave up on it.