This past weekend I took Alan up on his generous offer of an orchard tour. The weather was a bit grey, but I was thrilled to finally put a face to a name and see all the great stuff he is growing. I was so into it that I probably tried Alan’s patience a bit- I’m sure most tours don’t run over 2.5 hours.

I’m not sure how many pictures I can pack into a single post, so I’ll start with a few and reply to it over time. I’ve IDed about 20-25 that I think others could be interested in.

Here’s a Goldrush, where you can see how he has kept the fruiting area of the tree well above the ground. 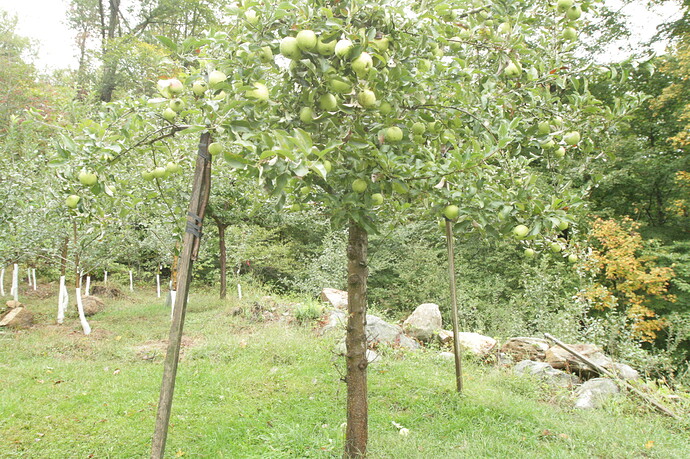 Alan is growing a lot of trees for his business at very close spacing. 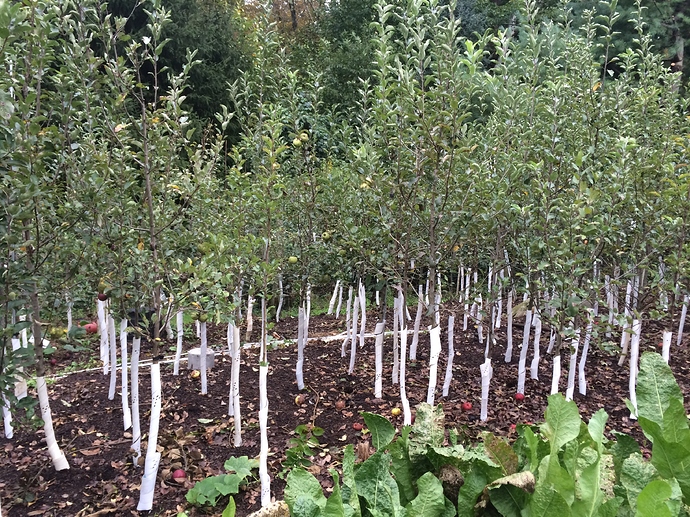 Here’s another set of them, which appear to be planted in pots. 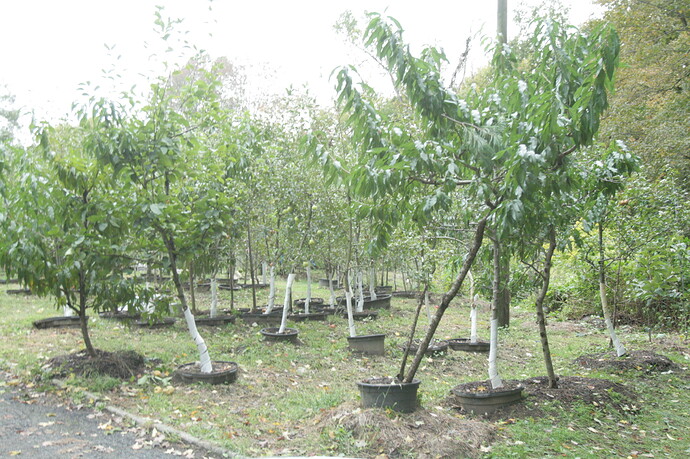 It wasn’t raining when I was in the orchard, but it had rained earlier in the day and you can see what remained on the Valor plums in this pic. We didn’t find any more 27 brix ones, but I did have a 23 brix one which was very good. That beats any I’ve gotten at the farmer’s market by 2 brix (and have good size and flavor). And that 21 from the FM was a one year-vendor thing which I haven’t come close to again (about 18-19 is normal peak, with some in the 12-13 range). 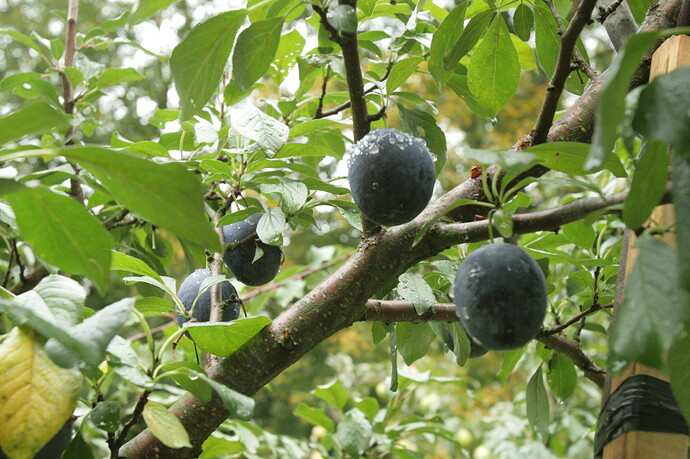 Alfred apricot espaliered on the side of his house. Aside from the winter protection, the other benefit is that critters don’t seem brave enough to empty the tree of fruit due to the location. 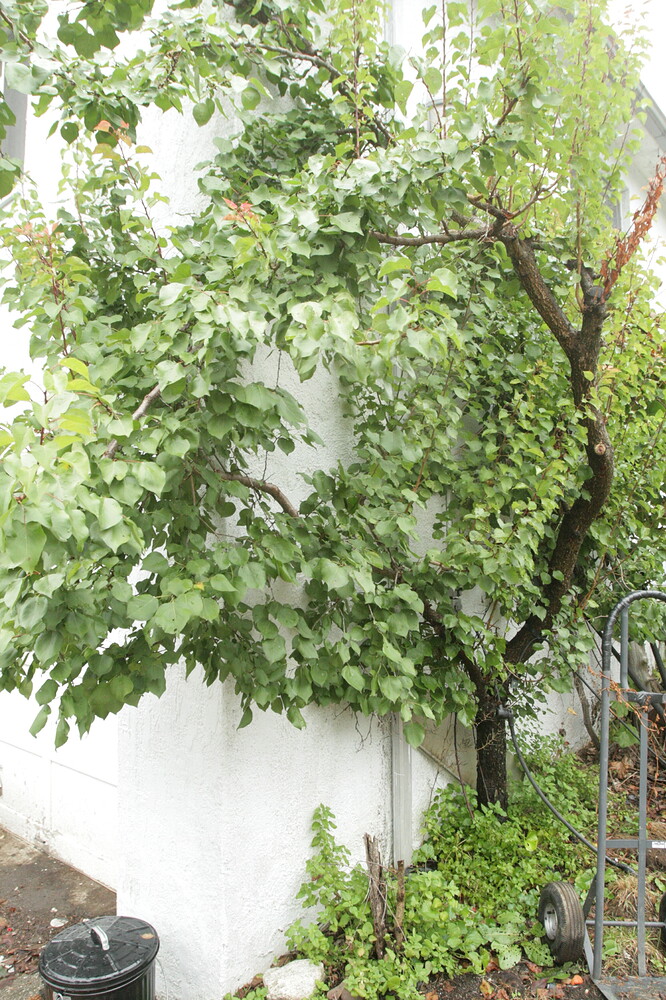 Here’s one of Alan, in front of a fig, holding ingredients for dinner. 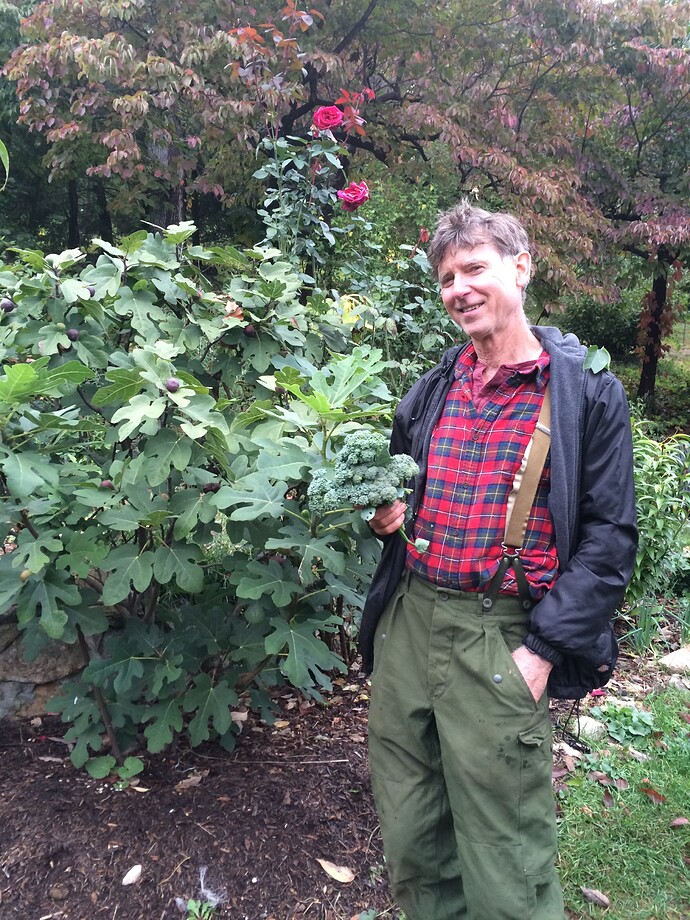 He suggested that I should get in the picture too. Though I don’t know that anyone would want that, given I already have a profile pic. 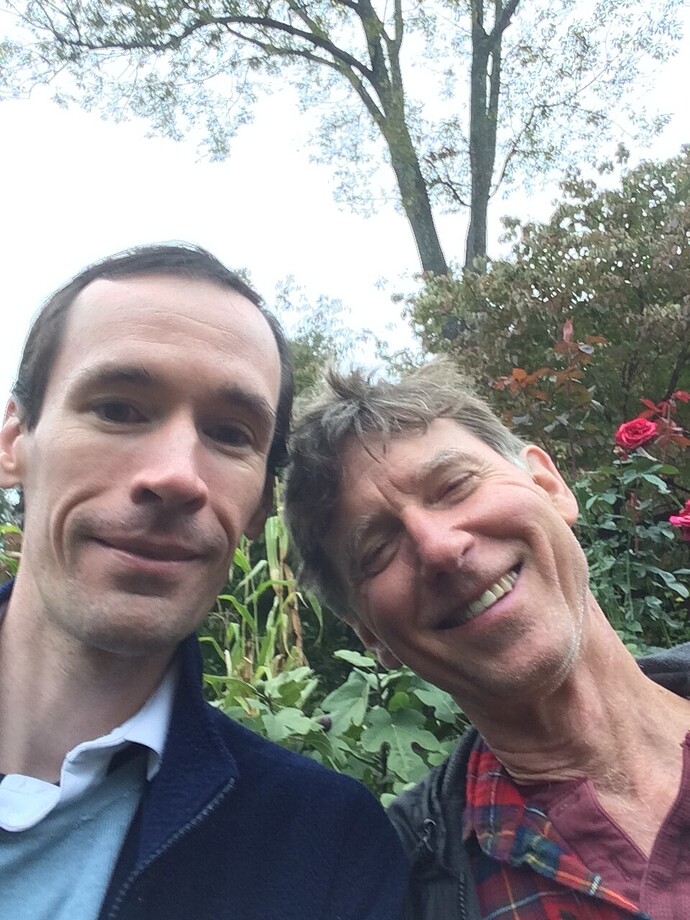 Cool beans. If anybody is interested in checking out my “orchard in the making”, I live in San Jose, CA.

Looks like a good time. I really could use more local friends to share our passion, my wife is so sick of my garden talk! I need to join a garden club or something!

Great pictures Bob and Alan. Thanks for sharing. Bill

Thank you very, Bob for taking those pictures and thanking Alan for allowing Bob to so. Pictures paint a thousand word.

This is just great. Always wanted to see some pics of what Alan is doing in his orchard. Looks like you guys had a great time.

BTW, I hope you guys don’t mind me saying, but I think the selfie captures I bit of you guys spirit (as far as I can discern it from your writing). Bob’s somewhat methodical/analytic personality and Alan’s free spirit (although I know that’s an oversimplification). Nevertheless, I could easily visualize Alan playing his guitar from that pic.

Are you two related?

Thanks Bob, nice photos! Its cool to see what you have been up to first-hand Alan. I didn’t realize you were selling bigger trees but it makes sense that rich clients would like such a thing.

Yeah, and my largest trees fall short of what many of them want. Often they are looking for 4" diameter plus and mine seldom exceed 2.5".

On another subject, I just measured a mushy Empress plum that reached 22 brix. The Valors continue to taper off and I measured a ripe one that tasted good but only reached 17. Still lots better than my figs (in photo) which turned sour after 3 days of cool rain. When Bob came they were still OK but ones ripe now are awful.

Bob turned me on to my first taste of jujubes from his bushes and they surprised me. Pure sugar with crispy texture- a kids delight I’d think. I will probably try growing some now.

Here’s an Elephant Heart, which Alan is growing over a reflective roof. I thought it was a neat idea, but Alan mentioned that it is really a pain to harvest them from up there. Maybe if the variety was more dependent on sun (EH can do OK with less) and ripened in a narrower window (so you don’t need to keep climbing up every day or two to check for ripeness) it would work better. 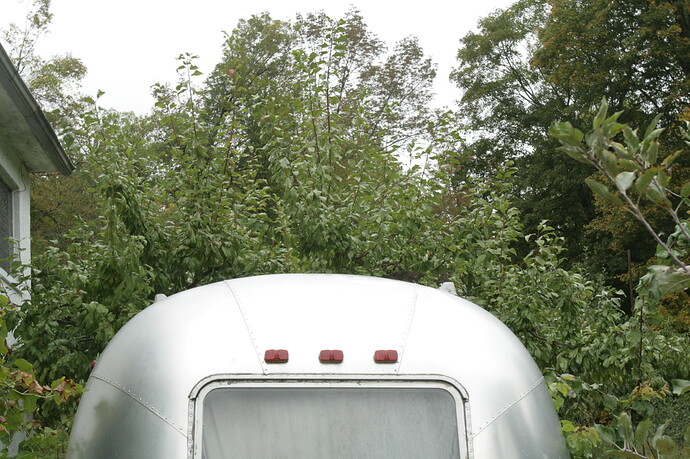 I think that described these as Winesaps or Staymens. It seemed strange to me, as I thought that they are often more colored. Maybe the old strain is much less red. 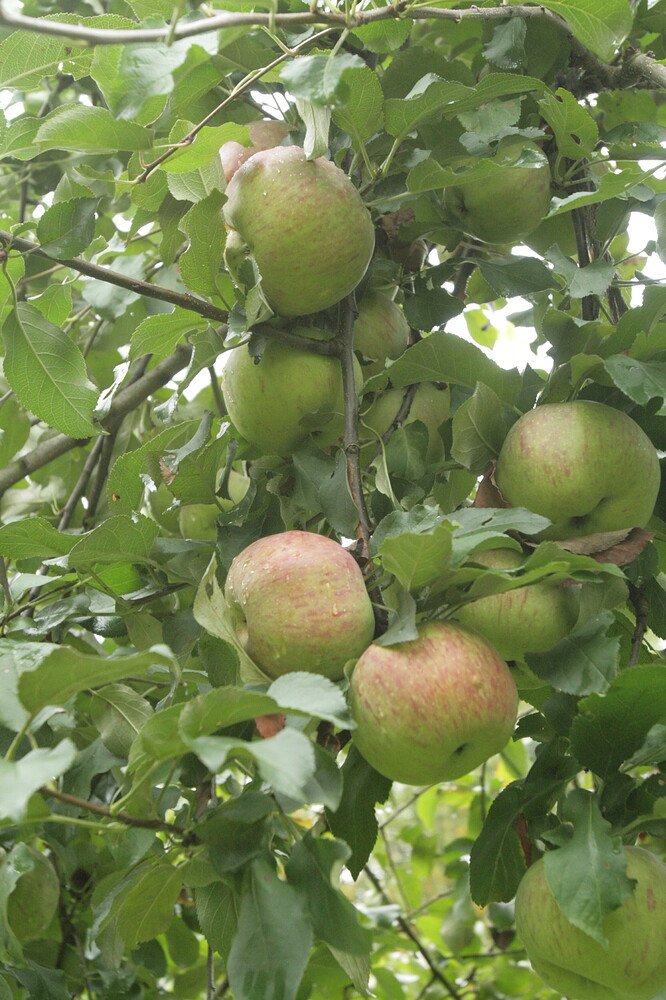 This was my first paw paw (Overleese). While interesting, I’m not sold on it. My wife ate a few too, but it doesn’t measure up to mangoes for her 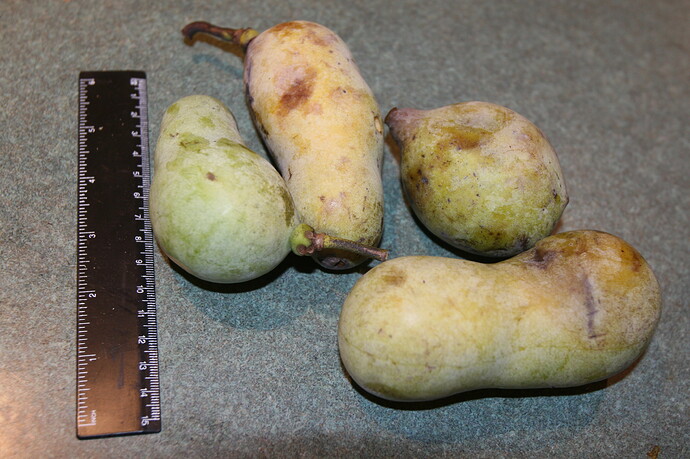 Here’s a pear that Alan described as “informally espaliered”. Looks nicely espaliered to me. 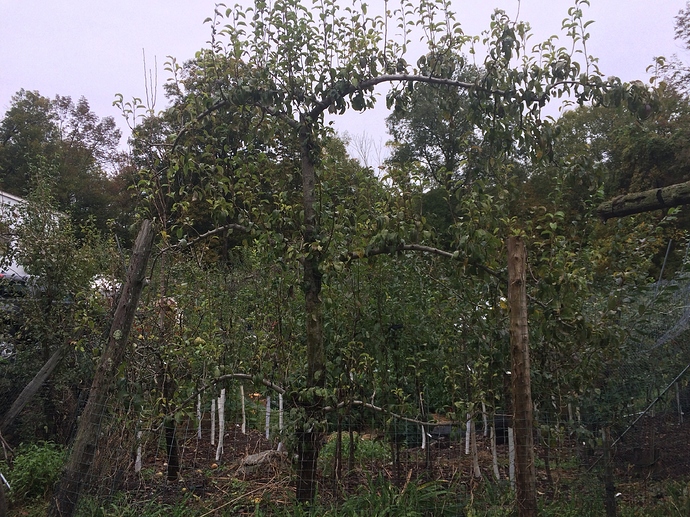 Toward the end, I noticed an Asian pear tree, which didn’t look like a Korean Giant. When I asked, Alan said that it was a Hosui, which wasn’t any good. I tried some and while it didn’t excite me, I knew it would be right up my wife’s alley. It was 11 brix and I want at least 13 from Asian pears- Alan wants high teens, which limits him to Korean Giant.

He told me I could take the whole tree’s worth, so I loaded up some grocery bags. In the days since then, we gave some to another Chinese family and they said that it was great and wanted to know how to grow it. My wife also thought it was good. So, fruit is often in the eye of the beholder. 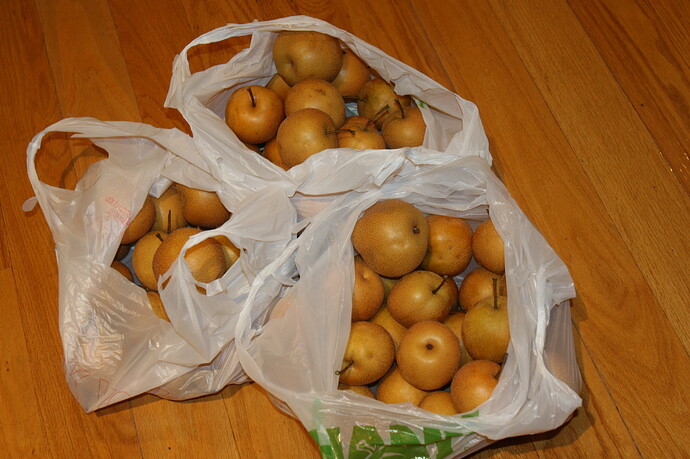 Nice operation, Alan! I like the apricot idea, I’ve been pondering an espalier along my west facing garage, an apricot might be perfect for that spot!

My spot has been terrible for cots when planted out in the open- not because of freeze but because of terrible bacterial spot, I think. I tried many varieties without ever getting significant crop until I planted that Alfred there and it now bears all the cots I need with good frost protection as well. The reflected light may combat BS and it certainly helps get up the sugar.

I’ve now planted a Tomcot on the rest of my available southern wall.

Before the next season I intend to put some screws into the stucco covered cement block to pull the branches flat against the walls so upper branches don’t shade lower ones. Right now I have to get on a ladder to harvest most of the best fruit.

Next year maybe we can schedule a joint visit to Alan’s place.

Thank you for the pictures from your visit.

A few months ago, I visited @zendog 's place in the DC suburbs of northern Virginia. So much fun. I probably tried his patience too, but he was a gracious host.

All of those trees, and greenery and no deer? Amazing. (or no visible signs of deer).