I saw this sign in the Paleocene exhibit at the San Diego Zoo today. 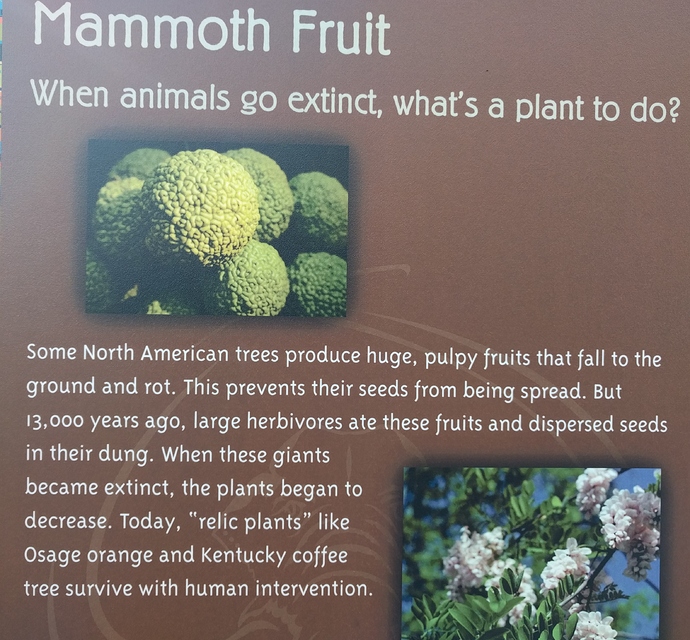 Osage orange don’t need human intervention here. They were planted here as wind breaks every mile during the dust bowl because they don’t need much water. Now they seem to grow everywhere. Cattle will eat the hedge balls, as will squirrels. Deer eat them too.

I had to spray hundreds and hundreds of them on my place. I’ve just about gotten rid of them, but still see a few seedlings pop up every year.

I’ve heard the wood can be very useful as it will not rot in humid/wet conditions. I’ve also heard when burned, it gives off some of the most heat of any wood.

Also in this category: paw paw and avocado. Paw paw has the added benefit of having a seed coating and skin that induce GI upset in humans and probably had a “gotta go now” effect on the bigger fauna.

Also in a similar category of native American plants is the honey locust tree, which grows extreme spines on its trunk up to about the height of your average megafaunal reach. Gleditsia triacanthos var. inermis are usually produced by grafting scions from the thornless branches higher in the tree onto a rootstock. I have physically seen deer eat honeylocust pods, so I don’t think they necessarily needed extinct megafauna and are more of a seed dispersal generalist.

Avocado are native to southern and near-southern hemisphere forests containing sapotes, etc. eaten by large-beaked birds both past and present.

I’ve heard the wood can be very useful as it will not rot in humid/wet conditions. I’ve also heard when burned, it gives off some of the most heat of any wood.

Very true Vsop. Hedge (i.e. Osage orange) posts can last 50 years or more in the ground. Many people still use them as corner posts.

The wood is very dense and burns hot. My son uses hedge in his makeshift forge to work steel. Some people in these parts won’t burn anything but hedge in their stove. They consider any other wood “trash wood”.

It’s also a very hard wood. Occasionally, you can see a spark when chainsawing it. I’m not sure why it’s not used as other hard woods are in wood working. Maybe it warps more when it dries?

My brother has used it in wood working some, he made a set of pistol grips from hedge. The biggest problem he had was cured hedge is so hard it is difficult to work with.

I have dreams of raised beds made out of Osage orange.

I love Osage Orange (Hedge) for heating the house. It contains very high BTU’s. I don’t like to get the chainsaw dirty for anything else except for maybe some oak or red elm. Hedge is also my favorite wood to cook a t-bone over!

The article posted by Levers101 is a great read and goes over some interesting stuff!

I have a friend with a saw mill who built much of his house with OO. He loves to work with the stuff but finding trees large and straight enough for lumber is difficult. It starts very yellow but turns a beautiful red with age.

Apparently it makes the best archery bows too. very springy.

They say that by the time Europeans arrived and started spreading it for use as hedges, its range had shrunk to just one small river valley in Texas. Apparently the tribe (the Osage, I think) that lived there had the market cornered for osage orange bows, and had become quite wealthy by trading it with other tribes. Apparently the source of the wood was a closely guarded secret.