I would like to know if someone has expierences with these types of mulberrys trees in Zone 7!

Would it be possible to them plant in my Zone or is it too cold for them?

Our winters in Austria (Südburgenland) are mild.

The lowest winter temperature in our previous years was around -18°C.

I really would like to have these types of mulberry.

Also … does anyone know if there is a difference between these?

They have the same name “Pakistan” but the species is labled different.

On this site its a Morus Macroura:

And on this its an Morus Alba:

Would be awesome if anyone could help me.

I can appreciate your interest in mulberries, but it would be wise to totally drop the interest in the Pakistan variety in your cold zone. The several trees here in 8B lost all new leaves, twigs, and some branches up to 1" thick when late cold events happened after the trees had regretfully come out of Winter dormancy before Winter had ended. This happened 4 years in a row, and the late freezes that did the killing were from 25 to 28 degrees F. When dormant, the trees easily handled temps below 20 Degrees F. To show the difference, 3 mature grafted Pakistan branches on top of an old Shangri La tree’s branches died off, but the Shangri La’s other branches and branches below the dead Pakistan branches did fine. “Fine” meaning the new baby leaves and new baby fruit also froze, but the branches and twigs did not die.They lived to fruit another day.Hence the removal of all but one of the Pakistan trees to make room for better trees that won’t get Winter whacked this way.

Thanks for the answer!

Seems like this site has given me wrong information:

Did you try these plants in pots?

Would be a nice alternative to have them on the balcony.

Anyway … i preordered a few trees from a Beglian Nursery.

I should get them soon

I guess they will be hardy enough.

I am in the Seattle area and have a Pakistan that is about three years old.The past few winters,the lows were about 15-18F.The tree has done okay.The temps probably didn’t fluctuate enough during early Spring to affect young growth.
The tree was originally planted in a half whiskey barrel,but these things grow big,with the roots maybe breaking it,by and by,so now the plant is in the ground.This variety is probably not a top choice for pot culture.
To me,the first link provided looks like a Pakistan,with the elongated fruit,while the second site’s photo is something else. Brady

@Austro_PawPaw, you should be OK with Illinois Everbearing. It’s been -18C here with no damage. The only problem is it grows fast and large.

paks seem relatively fine with cold weather(they actually wait until it gets really cold before dropping their leaves in autumn), and they also are the earliest to leaf out in spring, even when temps are quite nippy. Unfortunately, it is what leads to their undoing, especially in areas with frequent late frosts, as they seem sensitive to hard freezes once they’ve primed themselves into leafing out.

Hmm, yeah late frosts are sometimes a problem here too.

The last ones are at the beginning of May.

I might still try it with a large pot. (25 Gallons)

Maybe it works for a few years so that i can get it to fruit.

Thx, yeah thats why i have choosen it

I love sweet fruit … it can not be sweet enough for me, haha

first link provided looks like a Pakistan,with the elongated fruit,while the second site’s photo is something else.

ja. Ich bin vollkommen einverstanden (got that from google-translate app, of course)

I just would like to know what it is then.

In the description it says: "the mother plant is still very young and the fruits get significantly bigger when the tree gets older.

These Mulberrys can get up to 8 cm long. 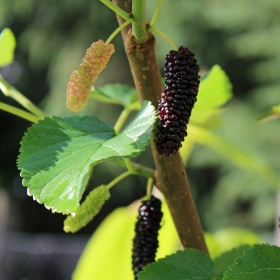 And from the slovakian nursery the mulberrys can get 12cm long! 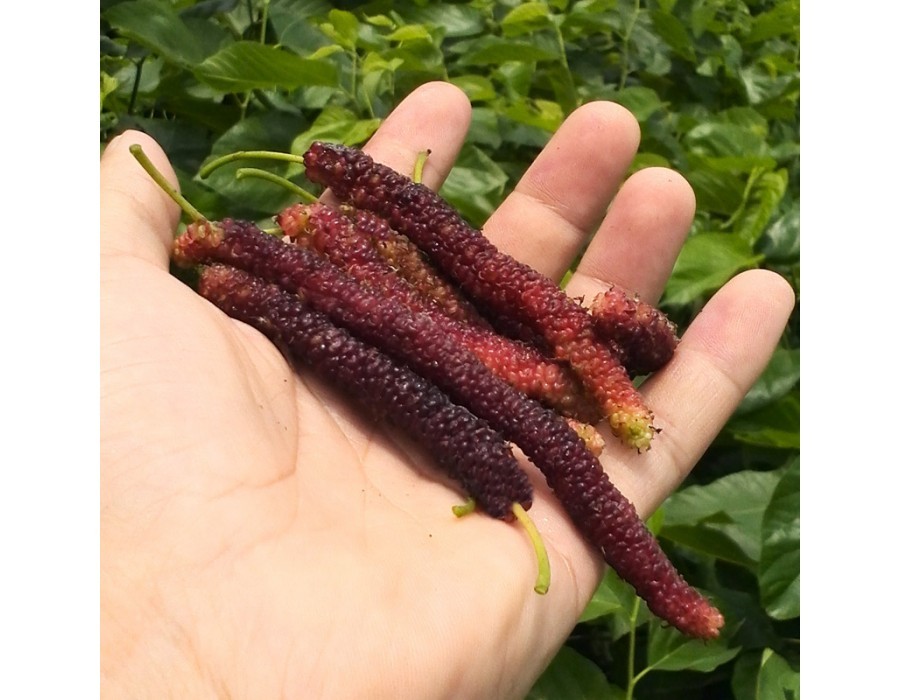 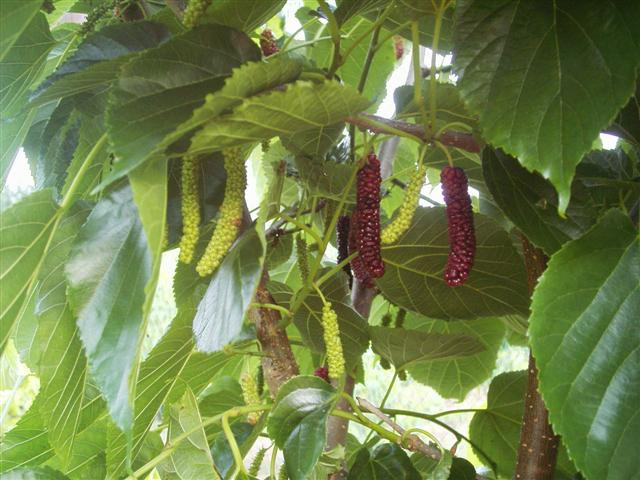 They look all different.

Don’t worry about the Slovak one, I hardly see anything available there (at least from the rarer stuff). This one is not available either.
You can sign in the notification system but it might be just faster to contact someone from the European scion exchange site Fruitiers.net and graft it yourself

I would like to know if someone has expierences with these types of mulberrys trees in Zone 7!

Mulberries are very sensitive to freezing after they begin growing in spring. So there are two issues winter cold and spring freezes after growth commences. You might not have the issues that fruitility is reporting. If other early blooming fruits get frozen out you may have the spring freeze issues. But there are climates that don’t have many spring freezes.

Normally, all of my fruit trees/shrubs and vines dont have any problems with late spring freezes.

Even the one fig that i got from the neighbours grows like crazy … it never got damaged.

My PawPaws (Love them), Saskatoon Berry, Hardy Kiwis and Quinces really like our climate and soil

I just would like to know what it is then.

at some point, mulb identification gets really fuzzy, especially with non-nigras. And makes me think that your proximity to middle east and asia–that you lucky folks may just have newer cultivars trickling in from that side of the world.
and ultimately, the presence(or absence) of nuances in taste, growth habits, and adaptability would indicate more than the nomenclature and fruit appearance ever will, especially with namesakes and doppelgangers.
here as well, paks are labeled alba by some nurseries, while labeled as macroura by others. Even the .gov agri repository is not without dubious entries,

They look all different.

mother plant is still very young and the fruits get significantly bigger when the tree gets older.

possible that it may just be the typical pak if young. Our paks had ~1-inch ‘runty’ berries as juveniles.

or a sister of Shangrila albas, which have somewhat elongated berries.

My PawPaws (Love them), Serviceberry, Hardy Kiwis, Quinces really like our climate

If you can regularly fruit apricots you could probably grow those mulberries. Figs, mulberry, pomgranate, persimmon, and grapes are all fruits that leaf out late but are very sensitive to late spring freezes.

Our mulberries almost always get frozen back but we have rather extreme late freezes.

I dont have them, but my neighbours have Apricots, Peaches, Nectarins and they fruit almost every year succesfully.

We normally dont have any problems with our Grapes.

might still try it with a large pot. (25 Gallons)

that is feasible. Not sure if austrian hardware stores sell the wheeled plastic dumpsters we use here in usa, but if you could get one of those, just bore some holes, and bring them into your garage/barn whenever a hard freeze looms. As soon as temps stabilize, just wheel them out to full sun to accelerate seasoning of fruiting wood.

like many mulbs, paks generally bear fruit on old wood laterals/diagonals, so it doesn’t affect production much if you decapitate the central leaders once your specimen grows too tall, and just let the side branches grow.

I have got a message from Dithmar about the Morus Macroura´s that he sells. http://www.demoerbeiboom.be/nl/catalogus/moerbei

Saharanpur is certainly not hardy in your area. Pakistan is quite hardy when dormant, I’m actually growing a more hardy bud mutation of the “pakistan” variety. The only problem with Pakistan is that bud break will start quite early even during a few warm
spells at the end of winter the buds will start to swell and if it then freezes the tree will suffer badly. So it is quite susceptible to spring frost.

I somehow knew that Saharanpur was impossible to grow outside.
Really interesting that he grows a Pakistan Mulberry which has hardier Buds.

Yeah that would be good idea.

But i think i can just put a large pot on my hand truck platform and drive it in when it gets cold.

If iam trying to grow these they can get to a max height of 2m, otherwise they wouldnt fit inside properly.

Pakistan is quite hardy when dormant, I’m actually growing a more hardy bud mutation of the “pakistan” variety. The only problem with Pakistan is that bud break will start quite early even during a few warmspells at the end of winter the buds will start to swell and if it then freezes the tree will suffer badly.

have the same observations. We have grown ~dozen varieties of mulbs and paks are always the earliest to leaf out. A good thing only if you don’t get late frosts, or if you have a greenhouse. But still worth the effort since you have a hand truck, and considering that it is often the first to give you berries, while waiting for the other mulbs to rouse.
we’d appreciate you keep us posted here, Hearing someone actually growing paks in austria-- that’s sound of music to me!

If iam trying to grow these they can get to a max height of 2m, otherwise they wouldnt fit inside properly.

Maybe you need a dwarf Morus Nigra for pot culture. I’ve got several on order for pots. I think the fruit of a real Morus Nigra will be better than Pakistan. I grew the later in CA and it’s OK but mainly just big fruit.

think the fruit of a real Morus Nigra will be better than Pakistan. I grew the later in CA and it’s OK but mainly just big fruit.

i agree, nigras are in a totally different level, and would recommend it too for any out-of-zoner who has the diligence to plant them potted, and who has the energy to bring them in and out of shelter. Nigras also grow really slowly, so would do well potted. Paks could grow >8 feet in one season.