How do you grow the maypop? I’ve tried unsuccessfully to grow it in Kansas before and thought I could pick up some good tips from the forum. The maypop is said to grow fine in zones 5-9. I really enjoy passion fruit but you cannot buy them here. Would it be wise to grow passiflora incensa? I’ve heard in some other warmer climates they may pop up anywhere!

I’ve grown it up here and it pops up everywhere. Eating passiflora at that time would’ve never crossed my mind.

I got seeds and plants from a landscape even a bit north of me where they’re entire yard literally had them popping up everywhere.

Thanks for the information Dax! Sounds pretty easy to grow if you get the right plants.

Full sun. Any shade will keep it from fruiting.

Have a plan for controlling the very aggressive suckers. I use asphalt on two sides and my lawn mower on the the third. The asphalt heat also seems to promote fruiting.

It does great in a pot.

Something that handles our hot Kansas weather sounds great! I need to reconsider how I tried to grow these.

I’ve got literally millions of them in my pecan grove. I’ll gladly tell you they grow rampantly in moderately fertile clay loam soil. About all they need is full sun and rain once in a while. What do I mean by millions of them? Well you can’t take a step without crunching 3 or 4 of them on about 3 acres of land.

@Fusion_power
Thank you! Those sound like exactly what I want! Would love to get some to try out once they go dormant! How do they taste?

Afraid I don’t eat them. They are just wild maypops.

You should sample them! Maypops can be pretty variable, and you might have a real winner!

(For example, my wild maypop tastes kind of gross. But the one I ordered is quite tasty.)

Also, if you find a maypop whose fruit actually changes color when ripe, I’d be very interested in it.

So i grew from 3 sources here in south central kansas:
1, a wild maypop plant i dug up near the south louisiana gulf coastal area planted spring 2017 in ks. Now it is pretty established and this spring (2019) 3 new suckers popped up 4 ft from the plant in opposite directions, sadly i dont have the others near it or it would be fruiting this year!
2, one i bought from a local kansas nursery spring 2018. It didnt make it through our mild 19 winter…
3, some seeds i ordered spring 2018 from someone on ebay who grows them 2 hours northeast of me in KS. They are getting established well.
My goal this winter is to move and mix some of them for pollination and hopefully get fruit next year!! I may cut them back soon and try to root cuttings before dieback winter gets them

Good news here in kansas, my lone Louisiana maypop #1 is 10 ft up into the bushes and has put on hundreds of flowers but with no cross-pollination sadly or it would be loaded, yet it has set at least 3 fruit that are golfball size so far. So it must have a 2% self-fertile rate… What do yall think??? 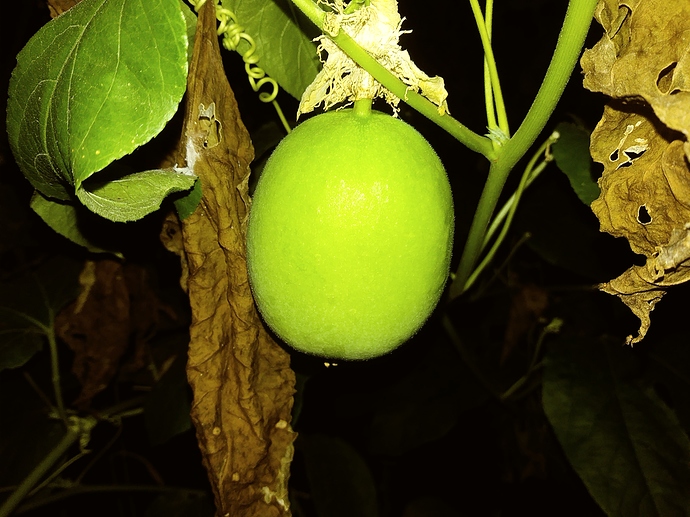 They will occasionally set unfertilized fruit. Unfortunately, it never juices up inside to become worth eating.

Good idea! I scratched some runners and put rooting hormone and burried them so we may have groundlayers…

Ok interesting! I hope they set seed for planting!

Another explanation is that bees are only bringing in distant maypop pollen 2% of the time. However, selfing sometimes takes place later in the growing season, if no other fruit has set. The vines can somehow turn off the self-incompatibility mechanism when sufficiently desperate. I’ve seen this in several Passiflora species and hybrids that are normally self-incompatible.

I find it really interesting how the plants do that, it seems they literally produce different types of flowers with the parts reconfigured to change what they are receptive to

per this research paper:

“…Thus, three floral stages occur: in the first and the third, only the anthers can be contacted by the legitimate visitors while in the second, both the anthers and the stigmas are placed in the way of the pollinators. The style movements succeed in all the studied species. However, in some species, in a proportion of the flowers the styles remain upright since the flowers open. These flowers are not able to receive pollen, neither by the pollinators nor by themselves, so they are functionally staminate. In fewer species, the dehiscence of the anthers does not happen in some flowers, so they are functionally pistillate. Finally, the three types of flowers may coexist in the same plant. This brings about the simultaneous occurrence of pollen donor-receptor flowers and only pollen donors, pollen donor-receptor and only receptor flowers or the three types of flowers in a single plant, respectively, leading to the corresponding functionally andromonoecious, gynomonoecious or trimonoecious systems.”

wanted to also include my opinion on varieties of passiflora for colder regions… I’ve grown both maypop and ‘Incense’ passiflora hybrid; I would get ‘Incense’ if I had to choose only one, but I’d go for both to ensure good fruit set and I would definitely plant them in a container to control the invasiveness. They remind me of some varieties of wisteria with how eager they are to escape captivity. ‘Incense’ flowers seem much more fragrant, and the fruit is very good (better than incarnata I think, it tastes even more like fruit punch when it is properly ripened). I’ve gotten several “ripe” but hollow fruits from incarnata, but I’ve not gotten a hollow one from ‘Incense’ so far, just generally low fruit set due to not having other varieties growing to supply pollen as it seems even more reluctant to set fruit, even with helping out via hand pollination

I don’t remember if mine started setting fruit early or not. There are absolutely a few areas nearby that could house a wild maypop.

They are certainly invasive, though. I planted mine on a spit of ground surrounded by the road, the driveway, and a concrete drainage V that got incredibly hot over the summer. It did well there, but it is starting to pop up in suprisingly far away locations. It’s not that hard to just pull the new shoots.