I am technically in zone 6 but I like to buy fruit hardy at the least to zone 5 so I feel like I get a cushion. I know, I can’t explain the reason well enough.

My question is, if I got some of these grafted varieties, that would feed mostly wildlife and allow myself to try them to see if i like them. Can I tree tube them or do they need to be staked and fenced (for deer) right from the get go?

I would make a 5 feet diameter ring fence for each tree to prevent deer damage. You can get a roll of fence at Home Depot, Lowes, or Menards for around $30.

I fence mine. Deer pressure here is pretty high. Apparently, deer aren’t supposed to like pawpaw leaves, but mine did. So did rabbits, with the young ones. My deer LOVE eating persimmon shoots and leaves. It’s like they are candy or something.

I used to use wire fencing that had openings 2 inches by 4 inches, but when branches or leaves touch those openings, deer pull the branches through and eat much more than just what’s outside the cage. Now I use the cheaper plastic fencing that has 1 inch openings. Leaves don’t stick through that, so it’s not an issue. I still have some trees with the wire but most are with the plastic now. In my yard, 5 foot high fencing is enough for most of the deer cages. Ultimately, I want the trees to be tall enough that I can remove lower branches and do away with the cages, too difficult to keep free of weeds and do maintenance.

I have had good luck with deer not eating my paw paw trees, and only nibbling my persimmons. (they heavily target my pear, cherries, plums, apples… ) The problem with deer is that they sometimes do so much damage the first time they attack there isn’t much of a tree left.

Yes i have to fence all my apples/pears in my orchard. Was just hoping to avoid having to do that to other types id like to add around the property.

Deer hammer my planted chestnuts but completely ignore my pawpaw and persimmons. I have heard of folks in some areas that get browsing on young persimmons. I guess deer will eat most anything if hungry enough. As for pawpaw, there was a training facility with a couple thousand acres in our area that was not hunted. It was very over populated and there was a 6’ browse line in the woods where nothing green could be seen under 6’ except for one plant. It was pawpaw. Deer love the fruit but don’t like the foliage.

At my place, I have to tube chestnuts to protect them and cage apples with heavy cement wire cages. I don’t protect pawpaw or persimmon at all.

Every area is different…

I have successfully grown pawpaw seedlings in tree tubes with ventilation holes. Tubex, 4 ft Combi-tube, vented. Be sure to put net over top of tube to prevent bluebird deaths, if you have bluebirds.

Pawpaws are the only thing in my entire yard that the deer won’t eat. I still have protection on the trunks though because bucks are more than happy to rub all the bark off the trunk.

I happened to be at the farm today checking some of my grafts. I came across this and thought it would be a good picture to add to this thread: 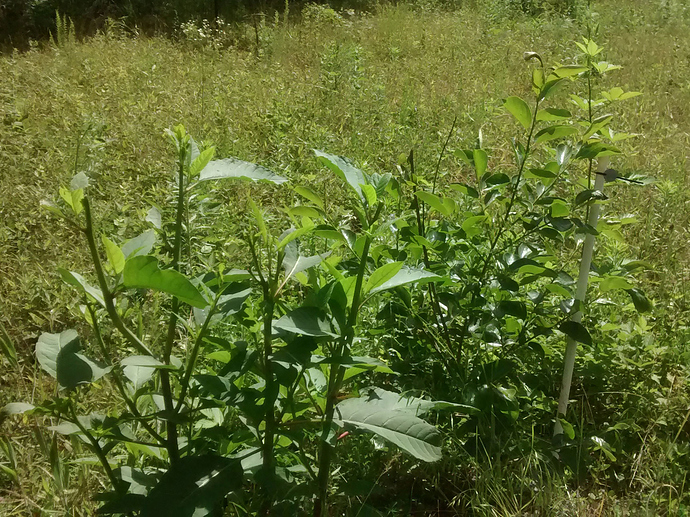 This is a field that has a clover base (it need mowed) where I have some seedlings planted. The apples are caged with remesh (cement wire) but the persimmons are not protected at all. The plant in the foreground that is heavily browsed is pokeweed just growing from the native seed bank. Right behind in and slightly to the right in the picture is a persimmon (Next to the PVC pipe marker). I grew some American persimmons from seed for rootstock and tony sent me some Nikita’s Gift scions. I grafted them while they were still in my Rootbuilder II containers and then planted them in the field. You can see the Nikita’s Gift has no visible browsing. I did tub some of these persimmons because NG is a hybrid and my other persimmons are American. I wasn’t sure if deer would like the hybrid better so I tubed some just in case. Well, so far those not tubed are doing better than the tubed trees.

As I said before, different locations are different, but here, I don’t protect persimmons or pawpaws.

By the way, Hambone, I checked my pawpaw seedlings today to. These are the ones I grew from seed in the Rootbuilder containers. I kept them on my deck for two seasons overwintering them in my cold room. I had hoped to plant some last winter after they went dormant but ran out of time. I planted them all this spring before they broke dormancy. I planted 23 of them and 5 did not leaf-out. The others are growing well. I did not fingernail any of the ones that did not leaf out to see if they are still alive. If I count all those 5 as losses, I had about a 78% success rate. I still have a few that were late to start that I did not think were large enough to plant. They are on my deck in containers.

To anyone planting pawpaw seed I suggest marking the spots with surveyor flags because it can be a long, long time before you see top growth. I planted pp seed Spring 2016- a few came up Aug 2016 but the majority did not sprout above ground until Spring 2017- a year after planting!

There might also be a difference in browsing habits between mule deer and white tailed deer. Also, I am suspicious that our neighborhood deer might have got into a neighbor’s cannabis patch, which might have affected their munching behavior. They loved eating my Yates persimmon and Rebeccas Gold pawpaw, but avoided mulberries that they are supposed to like. For several years they didnt eat linden or cherry leaves, but now they do. My deer restrict most of their browsing to about 1 foot to 4 foot off the ground, and rarely up to 6 foot. I want to get most of my tree leafy branches above that height because deer cages are a hassle. I limbed up my pawpaws and persimmon trees, hoping to remove cages in a year or two

Deer will stand up on their hind legs in the fall when food isn’t as plentiful. I see them standing up to eat late apples still hanging on trees, and to eat the tops of the sumac where the red berries are. Those red tops taste like cool aid. They love my cherry tree leaves, but I try to protect them.

You may be right. My experience is with Whitetail, not Mule Deer.

Mine are a subspecies of mule deer, called “Columbian Black Tailed Deer”. Link shows some of the variable eating preferences. Then there are some giant rabbits that destroyed some very small trees I tried to grow, like figs and another persimmon.

That table must only apply to Whitetail in the NW. My whitetail hammered my hazelnuts. They also love Elderberry here, but once established, they can browse it to the ground it will still bounce back from the roots.

The plant in the foreground that is heavily browsed is pokeweed just growing from the native seed bank.

Wow, persimmons must be really not tasty if the deer prefer to eat (toxic) pokeweed over persimmons. I have read that pawpaw has neurotoxins in its leaves, so that is not a big surprise. I wonder if persimmon leaves have a toxin, or maybe just high tannins like the unripe fruit?

Deer love pokeweed. It is very nutritious for them. I have heard folks say that persimmons produce something in the foliage that makes them unpalatable to deer but I don’t know that for a fact. I can just attest to how deer react in my area. I will say that they will eat white oak acorns first because they are low in tannins but tannins won’t keep them from eating red oak acorns or chicory.

Here is one of the pawpaw I planted last fall. You can see it is completely unprotected. 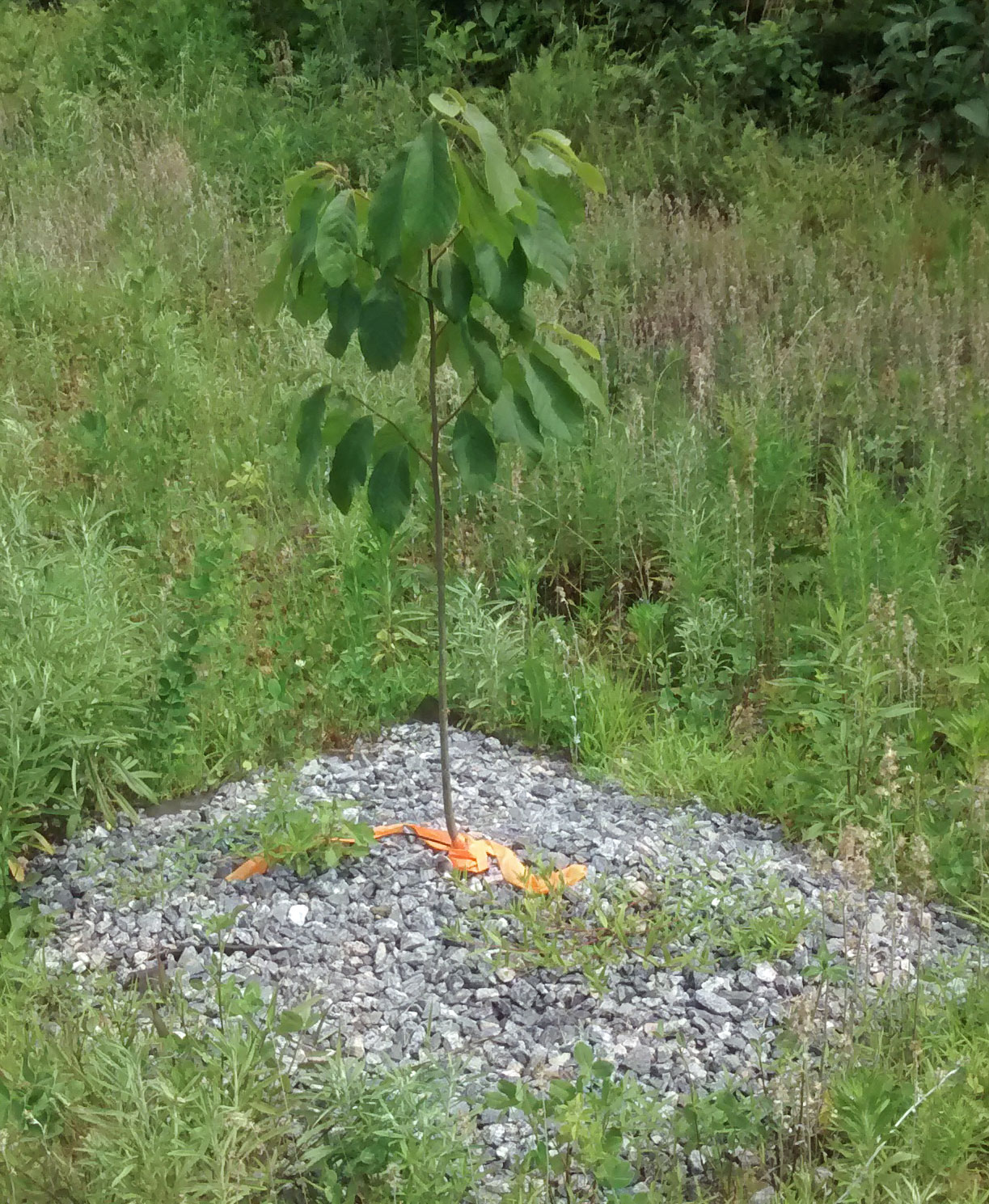 I planted 23 of them in this field and it looks like 4 did not wake up this spring. None show any browsing.

While I do plan to pick and eat fruit and nuts from many of the trees I plan, the are planted primarily for wildlife in as part of a forest stewardship plan. So, shoot for minimal maintenance. I’m planting trees in high volume and I found that organic forms of mulch broke down too fast. Also, I had a few larger trees blow over in a storm and afterwards, I found that voles and other critters were nesting in the organic mulch and had eaten through some of the larger roots causing the fall. I was able to save those trees. I now use landscaping material covered by stone. The stone hold the landscaping material in place. It does not attract mice, voles, and such as a bedding area. It allows air and water to pass through but helps retain moisture. I know in some areas folks have had issues with heat but I have not (yet fingers crossed). I was unable to keep up with replacing the organic mulch that broke down quickly with so many trees. This is once an done.