On several of my potted young Pawpaws something is eating my leaves. At first I thought it was just sunburn, but placing them under another tree canopy did not resolve the issue. Here is a pic of several removed leaves. The only issue I could locate online that resembles this is Phyllosticta leaf spots? But I could find no mention of how to treat the plants. Does anyone recognize this issue and know a remedy? 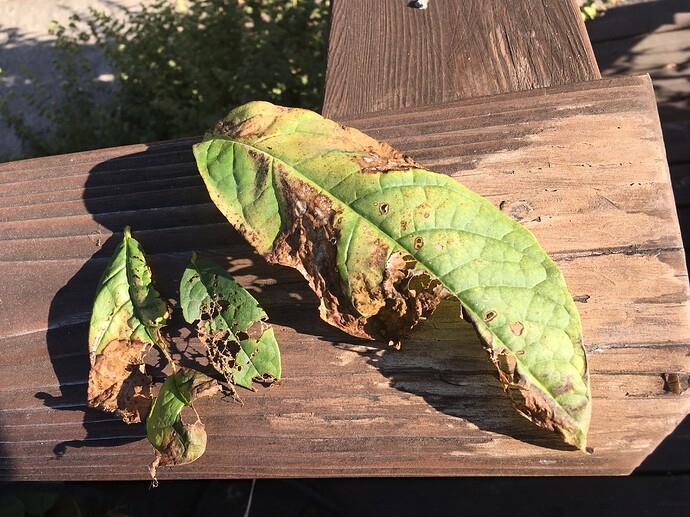 So the issue got WORSE after putting in shade or just stayed the same?
It does not look like phyllosticta to me. Usually it is very dark almost black spots with a yellowish halo around. Then they will grow into a larger area.
It appears like some insect nibbling combined with some other issue.
Has it been excessively hot around the time of this issue? Also how what kind of watering regimen?
All the questions of course are just to aid in possible diagnosis.

Another pic of leaves I removed this AM just as a preventive measure. It has been a hot dry summer. So about a month ago I placed them under the canopy of my Chocolate persimmon tree, thinking they were over exposed to sun. One plant was fully leafed out in spring but has lost all its leaves, except for the last 3 I plucked off this am leaving only a terminal leaf bud that looks healthy. I have watered them daily in the late day just before sunset, but think that my watering of their canopy may have caused some of the infection. Several other young Pawpaws are not showing the same signs. Only the ones I placed under my persimmon tree.
This am I took them to another location to be further away from my Pawpaws growing in the ground to avoid spreading and I picked every affected leaf off and took these pics, then sprayed the affected plants with a tobacco tea. Could it be a nutrient deficiency if not a fungus?
Will monitor to see if the treatment had any affect.
Thanks for helping
Dennis
Kent, wa 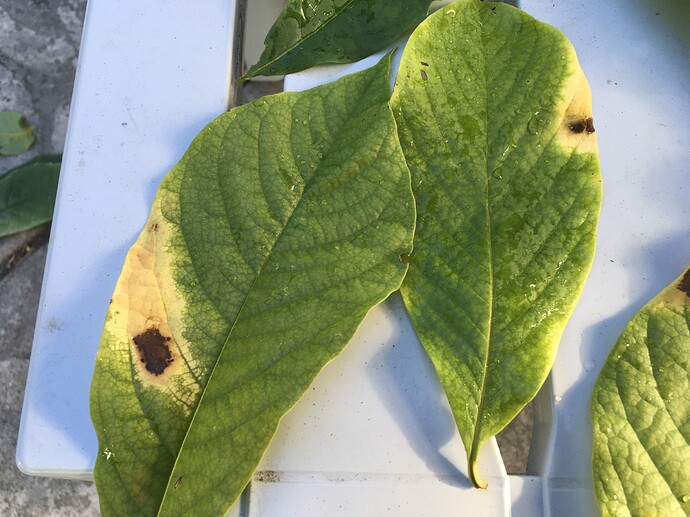 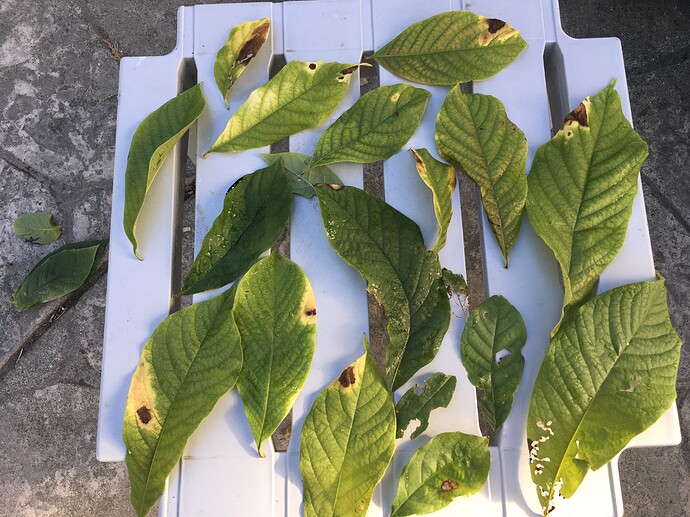 The first summer especially, you need to keep them in mostly shade… even up to 3 years is a good idea.

Disease or not… those just look like ‘end of the summer’ leaves here… I’ve not looked closely, but mine have black spots, yellow & brown leaves are dropping off. It’s September… that’s what they do; I’m not gonna bother to spray anything on mine; I’d leave those leaves alone… as long as they’re mostly green, they’re still photosynthesizing and sending sugars back down to the trunk & roots to drive growth for next year.

Thanks guys,
Appreciate your advice

Yeah many of my trees look rough about now. It’s not a pretty time in the orchard. Happens every year.
But some trees look same as they did in June.