So envious. My Mango planted in 2016, has grown to almost 8 ft. Has not flowered yet. 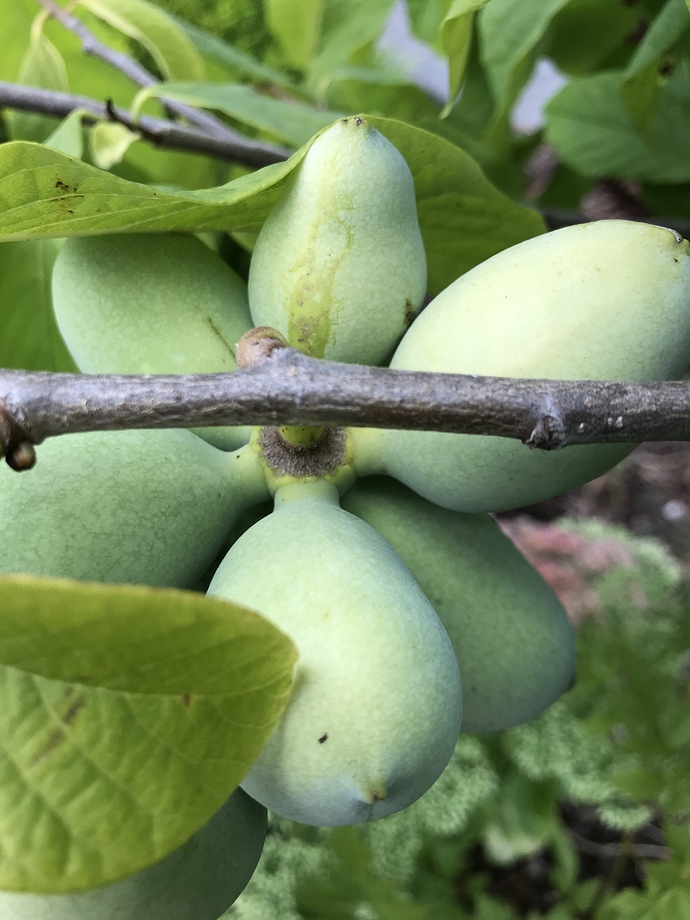 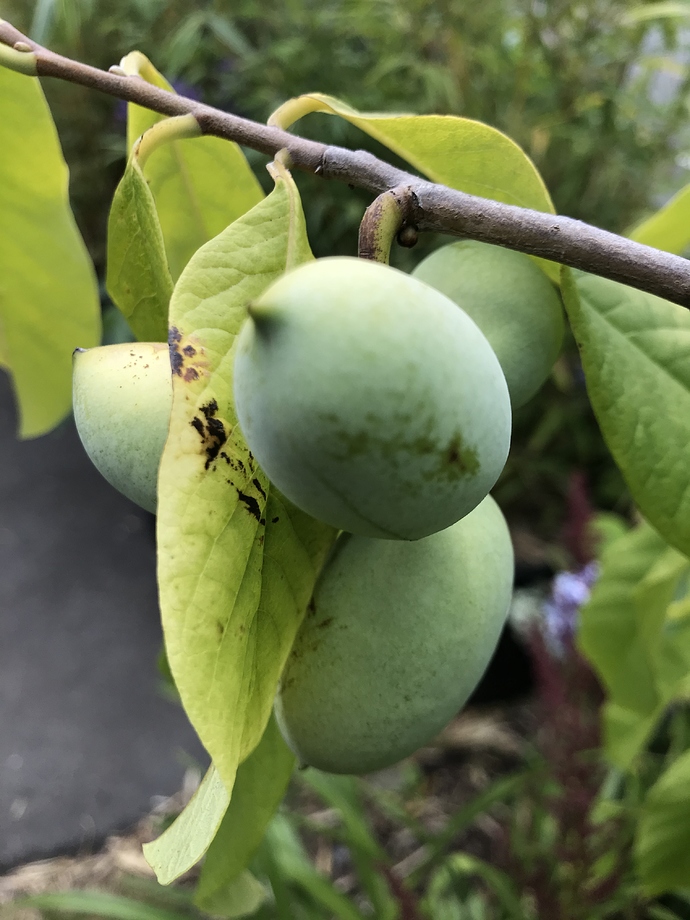 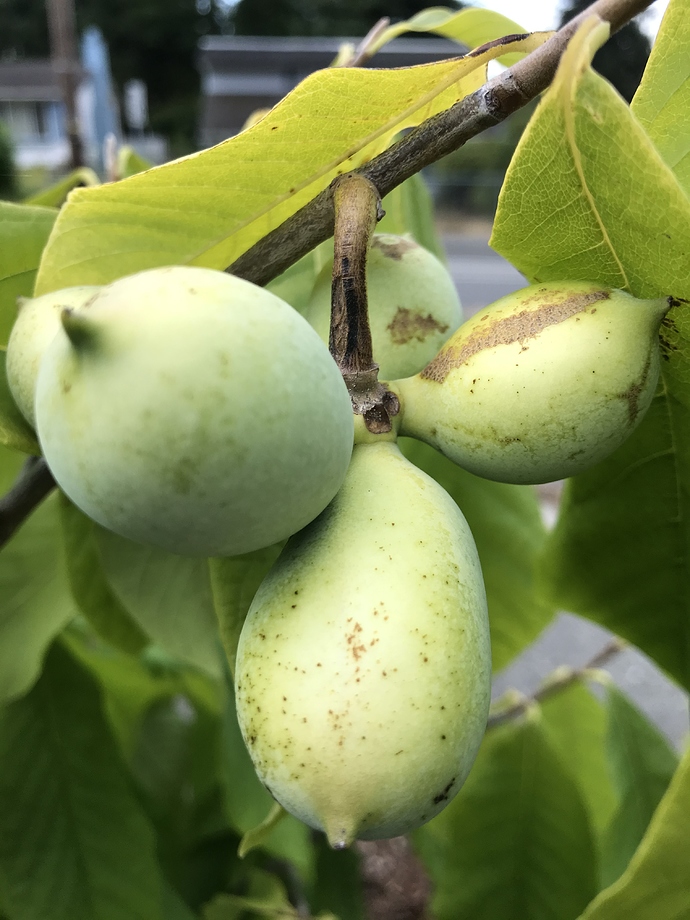 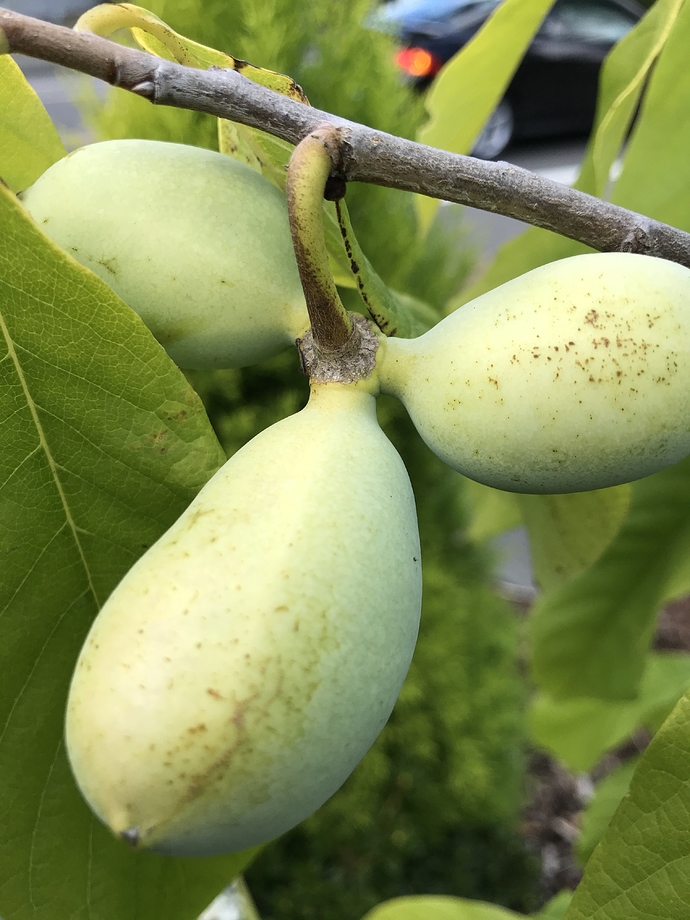 I caught ‘Mango’ on a good year. It was the best tasting pawpaw I’ve tasted.

I guess a lot of people say it isn’t so great. Well, I recommended it highly of course to find out it wavers year to year. That should be true with a lot of fruits. Heck I don’t squat about apples but I assume they can be inconsistent, too. An apple in my mind should taste the same about every year, however, I don’t grow them. I got a couple little trees on a clay hillside not growing at thus point.

There’s a nurseryman near here who also extols Mango. Though I suspect his experience is limited based on the fact that he’s a generalist and only grows 3 total cultivars.
I’ve never tasted it.
Had 2 seedling fruits this week from a local park. They were good but not great. A little watery - I like the thick texture of an improved variety.
My lone Shenandoah should be ripe in a few days.

I’ve tasted about all of them, I think. I’m missing a few, of course.

Thanks! I will update my “$300 Pawpaw” thread when/if I harvest it.

Yeah from what I can tell, Pawpaw is one of the more variable fruits out there in terms of flavor/quality not just from year to year but even cluster to cluster on the same tree.

definitely, no doubt. but the cultivars are so-so much better than the wild’s.

Im surprised and bummed yours has not flowered at that size. Both of ours planted the same year. Mine had a half dozen fruits in 2018. It was probably 6-7 feet tall at that time. Maybe being that far north is a different deal than down here? Does it have fruit buds for next year?

I did not see any sign of flowers in early spring. I have a Shenandoah and a graft of Sunflower. Both had fruit buds, flowered. I did hand pollinated them but no fruit set. I think out late freeze in May caused that.

My Mango is in half shade. That could contribute to it, maybe.

The difference in texture between mango and susquehanna is remarkable. When perfectly ripe, mango feels almost like a bag of goo, but the skin is still green and no strong overripe off flavors according to my tastebuds anyway. Susquehanna if allowed to get that soft would be totally black and way overripe. Susquehanna is very firm but melting when at the perfect stage. You are spooning out chunks of pretty solid meat. Firmer than a ripe avocado. I bet susq could be shipped decently. It ripens very slowly. I dont like pawpaws once the skin starts to brown

That’s exactly what I’ve heard about Mango, and that’s also my exact experience with Susq.
Susq is my favorite variety after Chappell.

I really dislike gooey pawpaws. Though if you are processing rather than eating out of hand, it would be no problem.

I think it would be fun to see everyone’s preference for ripeness.
I love the caramel/flan flavor but don’t like them crazy ripe. I want to have a little browning and the caramel fragrance versus the fruity fragrance. Usually at this point you get a mix of fruity and caramel flavors.
However, I do think you lose some of the potentially unique flavors at this stage. So, I plan to experiment more once my trees start to produce, so I can better Judge their nuances.

Happy to see these taste evaluations. I have a 12 year old seedling of Mango that has a fabulous taste, reminds me of star fruit. I’d choose it any day over Shenandoah. Should get Susq next year to compare, have high hopes.

Does anyone have any experience with Red Fern Farm’s pawpaw varieties (Atria, Betria, Rigel)? I think I’ve seen @Barkslip mention they were seedlings from Peterson varieties and had similar flavor profiles, size, and seed to pulp ratios. Is that accurate? I’m also curious where they fall on the earliness range. I’m on the lower end of pawpaw degree day requirements, so earliness is a big plus for me.

**(…)**they were seedlings from Peterson varieties and had similar flavor profiles, size, and seed to pulp ratios. Is that accurate?

I asked Tom for descriptions since I grafted them last winter and Tom wrote: “Atria, Betria, and Rigel are all heavy bearers of large fruit with low seed percentage and excellent flavor. Atria has rather elongated fruit, a bit larger than the other two. The other two have the more common elliptical shape.”

Ripening time I don’t know but what I can tell ya from having been there when pawpaws are in-season is that pretty much two weeks separates them. Pictorially speaking, they’re might be a pawpaw with 1/3 it’s fruit ripe while another has 1/2 ripe while another has 60% ripe. So, it’s more about overlap. I’m sure Tom would tell you which of all his cultivars is the very earliest. I posted this recently about Peterson’s: 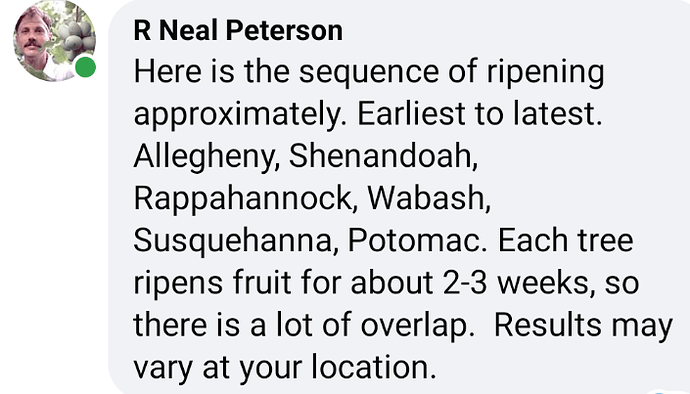 Here, there it is again. “A lot of overlap” says, Neal.

Wish I had the answers today, but, I don’t.

2 weeks is definitely less of a spread than I was thinking. I’m probably fine, but I do worry about the difference between just in time and two weeks too late in a cold year. I do plan to add Summer Delight, as it sounds like a real outlier.

I’ll have to pick up some scion from them this winter. 4 out of my 7 pawpaw seedlings are big enough to graft already.

After all this talk about pawpaws with @tonyOmahaz5 ealrier this year. I’ve stuffed my face with about 10-12 pounds of Pawpaw, probably about 15 different varieties thus far. I gave a pound or two to @IL847, since she hadn’t tried any before this year.

Wilsons, Shenandoah, potomac, allegeny, susquehanna, rappahannock, nc-1, wabash, mango, Sunflower seedling, Wells, PA-Golden, 5 or 6 seedlings from Jim Davis’ farm (two of which are amazing to me, and based on ripening schedule and taste I would guess to be Shenandoah and Allegeny crosses), a few unnamed KYSU selections and unnamed Peterson selections. All are 15+ year trees that an old friend of Neal who I made friends with and happens to be local.

For me, I definitely prefer the lighter end of the spectrum. Having had the chance to compare the taste for my location, Mango, Allegeny, Shenandoah are my preference (in no particular order). I also like a few of the middle of the road strength unnamed cultivars here. Susquehanna is decent too, but I don’t like it as much (not simply due to flavor), but also ripening schedule, not early enough for our location to give bountiful harvest. Shenandoah probably is the most ideal choice for most people who are new to paw paws for several reasons: lighter taste, early ripening, and lastly perhaps most overlooked - it seems to have the longest harvest window (at least on the 3-4 trees here), which means you don’t have to deal with harvesting/processing all the fruit all at once.

Most people wouldn’t believe the productions of these trees unless they came to see for themselves. In hard yellow clay soil, some of these have never been pruned over 15 years, but are 6-8 tall, multi leader vase like structures that look like sickly shrubs, but pump out an amazing amount of fruit.

Along with the suspected Senandoah and Allegeny cross. A few of the unnamed ones are amazing. There’s one that’s like a very large airy version of Allegeny, very light, very little density, very fruity. Will be able to taste Chappelle, Benson, atwood probably next year along with a few others.

@IL847 Can weigh in and give her own opinions. I think she mentioned to me that she likes NC-1 and Susquehanna.

Wow, that sounds like a great assortment of varieties to taste! Thanks for sharing your experience! Did any stand out to you in other ways, like being particularly strong tasting, unique, bad, or bitter?

I double blinded myself for tasting, scooped everything into bowls, numbers on bottom of bowls and had a master list before I ten-(or whatever number) bowl monte shuffled. Tasted all, wrote notes and then had to go to master list to see what I liked.

Actually I wouldn’t consider any of them bad per say. I consider some of them closer to wild tasting - either phenolic strong or perhaps a bitter maybe astringent aftertaste. Some gritty like Rappahannock. The most off-putting trait to me isn’t initial flavor (some more melony, some more bananay, some more fruity like punch), it’s actually aftertaste or texture. There’s some that develop this gritty sandy part of the aftertaste. And one of the favorite ones I liked was the suspected Shenandoah x Allegeny cross, because it was really airy, like almost a foamed quality to the texture with a clean finish, no aftertaste.

I wanted to judge the taste from a single location because I wanted to rule out location as a variable. Also since I am growing here, I want to know what tastes good here.

There are some pawpaws like Sweet Alice that taste amazing in the south but quite bland or not up to par north of mason dixon line. Shenandoah (to me at least) tastes ever so slightly different here than it does from my friend in Ohio.

I’ve been busy lately, I gave away plenty of paw paw. Gave away like 7 pounds and still had 10-12 pounds for myself. Lots to process, and more varieties are on their away probably in a week or two.

People here would probably cry if they saw the amount of slightly blacked pawpaw that are being tossed by either myself or my friend (the one growing all these) cause they are “too ripe.” His compost pile is quite comical too. You’re looking at it thinking it’s creeping periwinkle that has established as ground cover but it’s all paw paw seedlings that have sprouted!