I was pruning trees and thought I’d take a few pics of a row I was working on today. These peach trees were grafted last fall and transplanted this spring.

This is an individual tree budded last fall. 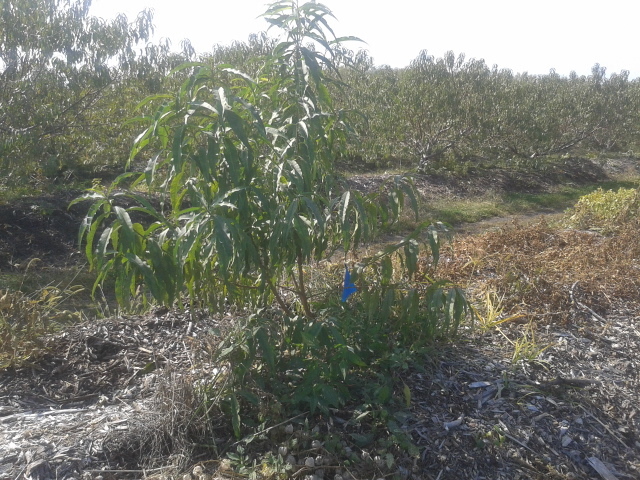 Here is a row of budded trees last fall, transplanted this spring. These were nothing but small sticks with individual buds this spring. 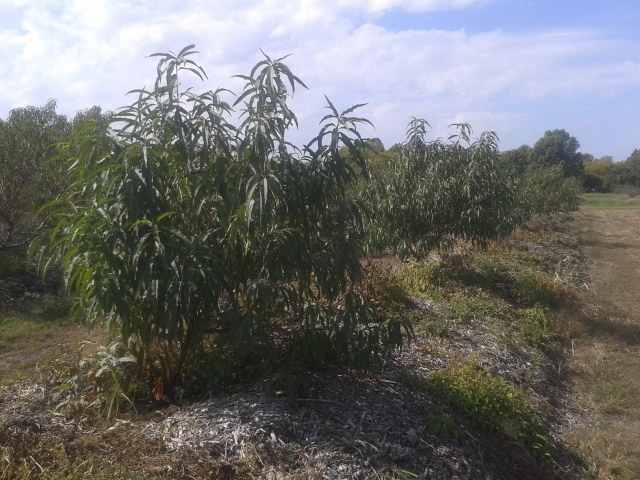 Here was the fastest grower this summer. Again nothing but a bud this spring, budded last fall to a 2nd year rootstock. It really took off. This trunk is probably about 2" from a bud in one season. Young peaches behave in so many ways like a weed. 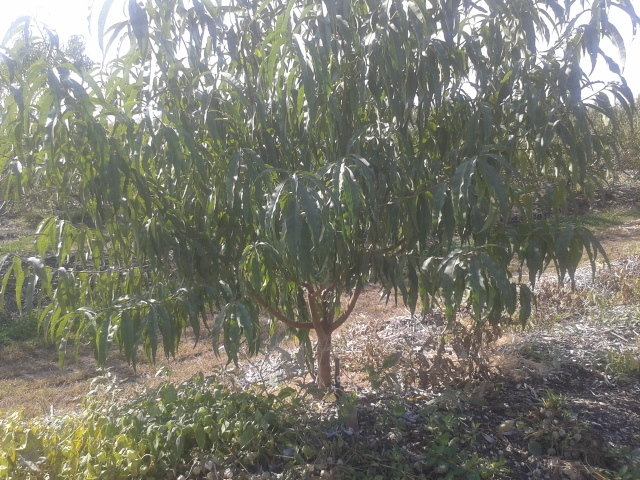 Very peaceful working in the orchard today. Sunny, temps in the low 80s. Doesn’t get any better than this.

Aren’t peaches and nectarines basically the same? My nectarine and nectaplum have been growing so slowly. Wonder if its the root stock.

I’ve only grafted about 10 nects, but as far as I can tell they behave the same way as peaches, at least when they are young.

It could be the rootstock, however I’ve not noticed much of a difference in my personal grafts on seedling rootstock, vs purchased trees on named rootstocks (Halford, Lovell, Bailey, Guardian, Tenn. Nat.). Even Krymsk seems to be plenty vigorous the first few years.

This is all based on my local Midwest conditions, in which peach trees do quite well in raised plantings, if they don’t freeze out. I notice you are located in CA which is a completely different environment, but I would think with your long growing season, peach/nects and their hybrids should do well w/ adequate water/nutrition and weed control. Of course you have more nematode pressure out there compared to here, which I’m sure could play a role in growth.

Olpea,
I am convinced your trees are on steroids

Holy cow Olpea! Those would be considered full grown trees in RI. Fantastic!

They have some flower buds, but I rarely get one year trees w/ many flower buds. Once quite a few years ago, I fertilized some new peach trees w/ lots wet (and very hot from a fertilizer perspective) grass clippings in a large area around the trees. The trees were in large raised plantings. Believe it or not, a couple of those trees grew to 3" dia. trunks the first season. The next year (second year) those trees produced about 75 fruit. I’ve never been able to duplicate that, but I’ve never tried to.

That’s a good point Matt. I’ve only grown one peach on Citation and didn’t much like the rootstock. Because it’s a hybrid plum rootstock, it sort of acts like a plum and plums here suffer some with leaf drop if we get a real dry summer. The roots don’t seem to have the ability to scavenge water the way peach roots do. It won’t surprise me if I notice the same thing about Krymsk 1.

All that said, the one peach I had on Citation did seem to grow about like normal the first year.

Those are amazing! If you weren’t someone I trusted completely, I wouldn’t believe those pics. I realize that part of the credit goes to location, but believe that more critical factors are your knowledge, skill, and effort. It takes me at least 3 or 4 years to get that kind size on bare root plantings! Your examples reinforce how very much I need to learn before I’m even semi-competent. But thanks to you and others here, someday in the future I may be able to post a pic with pride and say, “I did this.” It wouldn’t be as amazing as yours, but I’d burst with pride at achieving half that on a handful of trees. The pride would be mine, but the credit would belong to members here.

I don’t get Olpea’s growth, but still consider my trees overly vigorous- that is my established trees, I’d love that growth on my nursery trees. I do have a shorter season, particularly of the very warm days (with warm soil) peaches love.

However, in a lot of photos submitted by members, peach trees look lethargic. This is a species not very competitive against weeds, turf or nearby forest trees. Olpea’s trees are planted on raised rows, in deep soil and are heavily mulched with wood chips in what I assume is a deep farm soil that could grow corn.

In the right conditions, peaches grow like mad, but if things aren’t so good they can be like dwarf trees. No species I grow varies so much in vigor site to site.

In the right conditions, peaches grow like mad, but if things aren’t so good they can be like dwarf trees

I’d agree with that and use the dwarfing part to my advantage. Had some second leaf trees outdoors that grew 6ft without irrigation this summer. Heaven only knows how much they’d have grown with fertilizer and irrigation.

Greenhouse trees second leaf that had a decent crop and grew about 2ft. These were grown with a water deficit and spaced 2ft by 6ft.

FN, how high brix do your peaches go?

That’s the first time I’ve ever heard someone mention that and I agree completely. Tomatoes won’t push growth until the soil is warm enough (which is why they recommend mulching tomatoes after the tomatoes are established and growing well). I think peaches are sort of the same way.

I’ve noticed when we get slow warm ups in the spring, my peach bud grafts (from the previous fall) won’t push growth and they are more prone to die. I lost 3 purchased peach trees from Grandpa’s Orchard this spring. I think part of the problem was the trees (they said they had a problem with the supplier of those particular trees) but part of the problem was perhaps the slow warm up this spring (they gave me a full, hassle free refund, btw). When we get fast warm ups, my grafts (and purchased nursery trees) take off and never look back.

Well, with tomatoes the commercial growers here start them in plots covered in black plastic. I use black woven landscape fabric for my tomatoes and peppers and cover it with mulch when heat gets intense. I bet if you pulled away your woodchips and put down black plastic when spring is slow to warm up you could save some trees. With plastic that doesn’t breath you need to remove it in summer so too much root doesn’t develop at the surface trying to get oxygen.

I have read articles about the temps needed to get fruit tree roots growing and optimum temps for max growth. I don’t remember the specifics, but peaches sure liked a warmer soil than apples.

FN, how high brix do your peaches go?

The highest I can remember is 22. My buddy had some on shallow soil this yr he claimed were 26, both Valley Sweet. I haven’t grown that many peaches since I got the refractometer. But I’d say 18 is more normal.

I only started measuring late in the season and some of my sweetest peaches were already done but it is doubtful the sweetest even reached 16. With luck I will get to measure the likes of Goldust and O’henry next year. Do you think Valley Sweet is possible here?

I also wonder what Olpea gets with all that vigor.

Do you think Valley Sweet is possible here?

Valley Sweet has been difficult at times. It’s freestone and sometimes defects around the stem has resulted in a moldy interior. It’s also low acid so if you don’t get the brix, taste may be flat. It can be delicious with flavor similar to the Honey nectarines. But I’d recommend any of the Honey varieties before VS. It matures about with Honey Royale. So I’d say see what you get with a full crop of the nectarine next yr.

I’ll have more peaches the next few yrs and a better comparison.

I also wonder what Olpea gets with all that vigor.

There are several people (many of whom I respect their fruit knowledge) this year measuring brix, maybe I’ll buy a brix meter next summer and start taking some measurements if I have time. I doubt most of my peaches will measure in the top tier (from a brix perspective) but I have a few cultivars which seem to be very sweet (from my taste perspective). If I have time, it may be fun to compare some numbers.

I still don’t know what meters you all are using (don’t bother posting about it now for my sake) but may start a post next summer to make sure I get the right meter.

Amazon and others have them for close to what you’d expect to pay for S and H. Now that I have one I’m thinking it’s a useful tool (and fun toy), although undoubtedly another instrument moving us farther from strengthening and focusing our natural senses when trying to figure the world out.