Hello! Thank you all for your previous help in guiding me to transplant this tree into the ground. It did survive and actually sprouted a lot of buds, so much I snapped some off as they were too close to each other and wouldn’t have space to grow.

I’ve recently has to place it in a greenhouse to prevent the squirrels from getting to it. The netting I had tried before wasnt able to keep them out. I always keep a square on each side open to allow for airflow, and it gets watered 2x weekly.

One of the branches has died off and the fruit is wilting on it. But the rest looks fairly healthy, to my eye at least.

From the picture though you can see some leaf discoloration. I had poured in homemade compost when I first transplanted but haven’t used any soil amendments since then. Any idea why the leaves are doing this? Recommendations of what I ought to try?

Thank you in advance for your time! 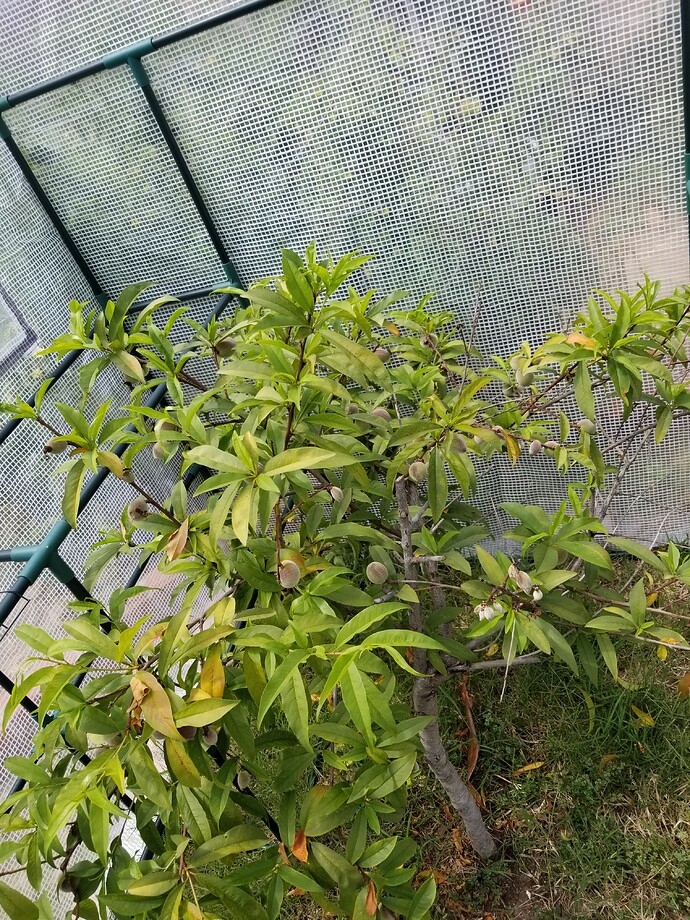 I’d pull up the grass around it and give it a little fertilizer.

Thank you for that suggestion. I had pulled up the growth around the base and fertilized it about 2 weeks ago. Unfortunately, it’s doing much worse. The peaches aren’t growing in addition to the discoloration you’re seeing. Does it need more sun then it’s getting within the greenhouse?

Your tree looks somewhat similar to the one in this recent thread.I’m not sure if the problem had been found out.
Were the leaves checked for Spider mites,particularly the undersides?

Hi Tippy, I know many times the disease is described as a sort of shot hole appearance on the leaves, but sometimes the disease manifests differently. I was thinking this is possibly the case since the tree is in a greenhouse. Here is a pic of X disease on a peach [image] That said, of course I’m not at all certain is X disease, but I thought it a possibility, since X disease just affects different branches at first. Now that Marc has indicated the other trees are showing symptoms, I’m no…