I should never say anything good about my fruit trees. I think they hear me and decide to prove me wrong. As soon as I dared to write that my RedHaven is looking great . . . THIS happened. I went out tonight and saw that many of the leaves had turned yellow and fallen.
Here is a sample. What do you think is wrong? Not enough water? Too much water? Not enough fertilizer??? A disease? 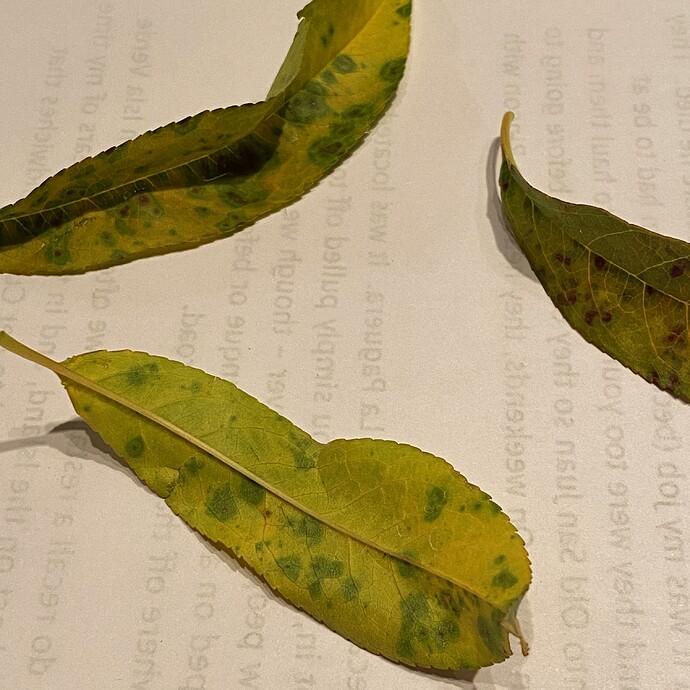 I think it is just water deficiency because this happen to my peaches last year and this year too.
My peaches were loaded with the fruit and only 4 year old and not getting enough water. I would worried more if newly growing leaves turned yellow and spoty.

Think you are right, Naeem. It happened, literally, overnight . . . and once I soaked the tree really really well - it really perked up. Thanks.

Hmm, I’ve not lived in VA, but I thought VA received a fair amount of rain? We’ve had some pretty dry years here in KS/MO and I’ve not seen peach leaves do that. Some of the foliage will get a little yellow and lose some leaves, but I don’t recall ever seeing the spots on the leaves, which your picture shows.

Those water soaked lesions look something like copper damage to me. Or possibly Coryneum blight, but generally that’s a disease most prevalent in western states.

Of course it could be a couple issues together. It could be drought stress along with another issue. I looked up recent rainfall in Chesapeake VA. It’s been about a month since the last good rainfall, but that’s generally not enough time to drought stress peach trees, particularly since temps have not been really hot in Chesapeake VA for the last month (compared to KS/MO standards).

If drought stress is occurring on your Redhaven, maybe there is some other factor contributing to it which I’ve not experienced (i.e. very sandy soil, etc.)

Karen,
What your leaves and tree look like now?

Hi Karen
I checked my scions you sent, they are doing very well and are growing normally! So the tree is most likely not diseased. Most articles I have read indicate too little water. If you have not fertilized it recently in the last year, the yellowing could be a nutrient uptake deficiency, perhaps due to lack of water. I keep a layer of several inches of compost mulch around my trees to help hold moisture and keep microbial action going on during dry spells. If you don’t have them mulched perhaps a handful or two of 3-16 covered with several inches of compost or grass trimmings or leaf mulch would be in order to keep a steady amount of nutrition available. This would limit your watering needs. Thanks again for your scions.

They perked back up - but lost a lot of leaves. All the yellowed ones dropped. Hope the fruit doesn’t get sunburnt. It all happened, literally overnight! I had watered, too. And when I say ‘watered’ - I soak them on a slow hose for several hours. (Still waiting for the well guy to show up! I didn’t expect to be doing the hose dragging routine this summer . . . again.)

The water certainly helped. A few of the smaller fruits were a bit shriveled, too. And that, to me, says ‘lack of water’.

@Olpea - Our soil is rather sandy. Sandy loam, I’d say. And it rained a lot this spring . . . but not too much just lately. (I’ve been dragging hoses to prove it!)

As for the copper you mentioned . . . I never sprayed copper. I sprayed with Infuse / Imidan / Fruit Tree and Plant Guard and Immunox - so far this season. No copper. No sulphur. - - - I thought that the spots were unusual, too. And I thought maybe I’d watered the trees TOO much. ? But they looked sooooo much better today after having some water.

I thought that the spots were unusual, too. And I thought maybe I’d watered the trees TOO much. ? But they looked sooooo much better today after having some water.

This month has been really wet here. As of yesterday, we have received 11 inches of rain this month. Today it rained at least a couple inches, so that brings the monthly total to 13". Even the few trees in my yard which are not on a raised planting, don’t have any leaves like the ones pictured.

We’ve also had a drought that for the summer months was drier than the driest year of the dust bowl. This was 2012. It was also super hot that summer. It was so hot and windy, it felt like a blow dryer when you set foot outside. It was so dry cattle ponds in the central and lower plain states dried up. Farmers were selling cattle because they didn’t have a way to water them. We got something about 1/4" of rain all summer. I never watered a single peach tree that summer (We did do really good weed control though). The peach trees had some yellowing of the leaves and leaf drop, but not the water soaked lesions.

The caveat is that our soil is pretty heavy and holds water pretty well. Different from your sandy soil. But that year, the soil was bone dry here. It was hard as concrete.

Hi Karen,
Here is some information I gave another person who has been working on improving his soil. Understanding the Cation Exchange Capacity of your soil can lead to less dependence on commercial fertilizers as you use mulch and other organics to feed your plants. I did not realize how important CEC is until I read several soil science articles. In your spare time you may find these interesting.
Dennis
This article gives you a fair sense of why in our typical nw soils that are volcanic in nature and tend to have mostly gravelly, sandy and loam content with only minor contents of clay are very low in CEC values which is why I have relied upon organics to continually raise my soil fertility:

What is your soil cation exchange capacity?

Soil cation exchange capacity (CEC) is a significant number for an important soil characteristic. It comes into play when applying water, nutrients and herbicides, but do you really know why?

This article on the other hand gives you an idea of why adding organics to any soil with low CEC is advisable
The key word is adsorb vs absorb: Absorption is where a liquid is soaked up into something like a sponge, cloth or filter paper. The liquid is completely absorbed into the absorbent material. Adsorptionrefers to individual molecules, atoms or ions gathering on surfaces.

“ Organic matter can have a 4 to 50 times higher CEC per given weight than clay. The source of negative charge in organic matter is different from that of clay minerals; the dissociation (separation into smaller units) of organic acids causes a net negative charge in soil organic matter, and again this negative charge is balanced by cations in the soil. Because organic acid dissociation depends on the soil pH, the CEC associated with soil organic matter is called pH-dependent CEC. This means that the actual CEC of the soil will depend on the pH of the soil. Given the same amount and type of organic matter, a neutral soil (pH ~7) will have a higher CEC than a soil with e.g. pH 5, or in other words, the CEC of a soil with pH-dependent charge will increase with an increase in pH.”
http://nmsp.cals.cornell.edu/publications/factsheets/factsheet22.pdf