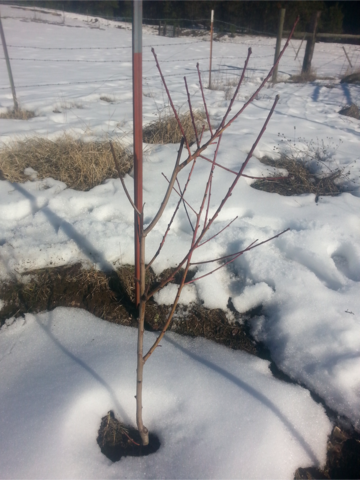 Hey guys, new to fruit trees. I bought a redhaven semi-dwarf peach tree last year in april. Last year i only pruned the branches back a little bit. But I noticed the tree only grew on one side. The only branch that is on the left side is hardened and looks dead.
Do I let it go another year and see what it does? or what? I’m trying to figure out the stuff I need to do to take care of the tree before the snow melts. So I know what exactly I need to do prune, fertilize, etc. etc.

I wonder if you might top the tree right below that upper scaffold at a bud that faces the opposite direction to try and force growth in that direction. Or maybe try notching above an outward facing bud to try and initiate growth.

I think Speed is right about topping the tree.

Occasionally I get some new peach trees which won’t grow shoots on one side. Generally I pull a shoot from the other side over w/ a string and a stake, so that the little tree has some growth extending on the blind side (the side w/ no wood). Makes for a more even canopy. 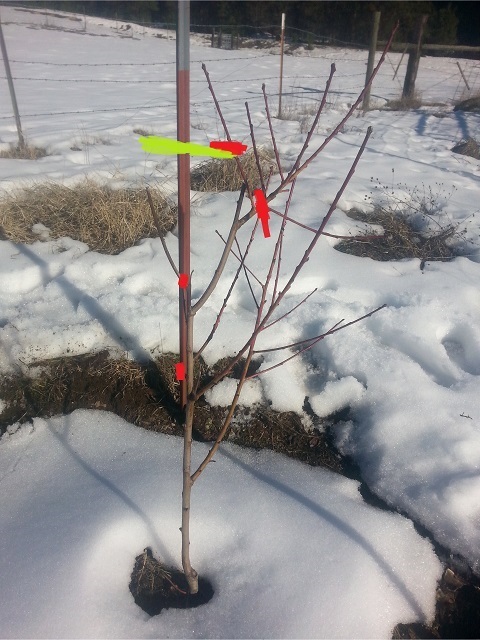 ok, Just cause i’m still a “noob” I wanted to make sure I fully understood what was being explained.
red= cut marks
green= future branch
just used Microsoft Paint.

It’s a bit hard for me to see in the photo because of the T post. Plus pics aren’t three dimensional, so it’s hard for me to tell which way all the shoots are heading. Let me just run a quick outline how I train young peach trees. I really do it more or less by the book.

I generally top the tree at about 30". I try to pick 3 or 4 scaffolds going different directions. If there aren’t any scaffolds on one side of the tree (and it doesn’t look like the tree is going to grow any on that side) I pull a scaffold around, stake it and tie it there. I prefer small shoots to make scaffolds (Alan’s rule of no more than 1/3 of the diameter) if possible to keep the scaffold from dominating the trunk.

However, since peaches don’t readily throw adventitious shoots from blind wood as often as other trees, I sometimes have to choose a large diameter shoot to make a scaffold. I start scaffolds at about 1.5’ from the ground. I try to put at least 3" of vertical space b/t the scaffolds. In a pinch you can just use two scaffolds if they are heading in opposite directions of the tree.

I used to start scaffolds closer than 1.5’ from the ground. It works fine if you are planning to control weeds through mulching only. However, if you plan to spray under the trees for weed control, then the scaffolds are best started a little higher.

On your tree, it looks like you could keep the lowest shoot as a scaffold, but I would probably tie it down a bit. It’s heading a bit more vertical than I like.

You can pretty much pull a shoot any way you want and stake it there to make the tree how you want it. Just don’t pull too much at first or you can break the shoot off. If you have to move a shoot a lot, think of how a dentist would do it. They adjust braces a little at a time once a week.

ok cool thanks for the info. Makes more sense now.