Peach tree only growing out on a single side

I planted this bare-root peach tree last spring (3/2014) and currently it is on its second leaf. I did a knee high cut at planting and so far all the growth of the tree has been on the left side (if facing). I have no branching on the right side at all. I am wondering if this is common and eventually it will start growing on the right side or if this could be an issue?

You need to reset by cutting back again or train a branch to the spot you want, or some of both. It’s not going to push new shoots to fill in a blank spot. You need to force the issue.

As the tree gets bigger it will likely look more balanced. But it needs help. A picture would allow specific instructions.

Do pears respond as apples do to nicking and notching? I used nicking to balance out several espaliars and some young trees.

had the same issue with a plum. Just grew the one branch up and when it got to 4 buds chopped it off again. Now it has 4 branches to form the canopy. It happens. At least thats not as bad as when I have had to form a new central lead. It takes a while to grow 24-36 inches.

Ok, here are some pictures. So maybe I top it off again? 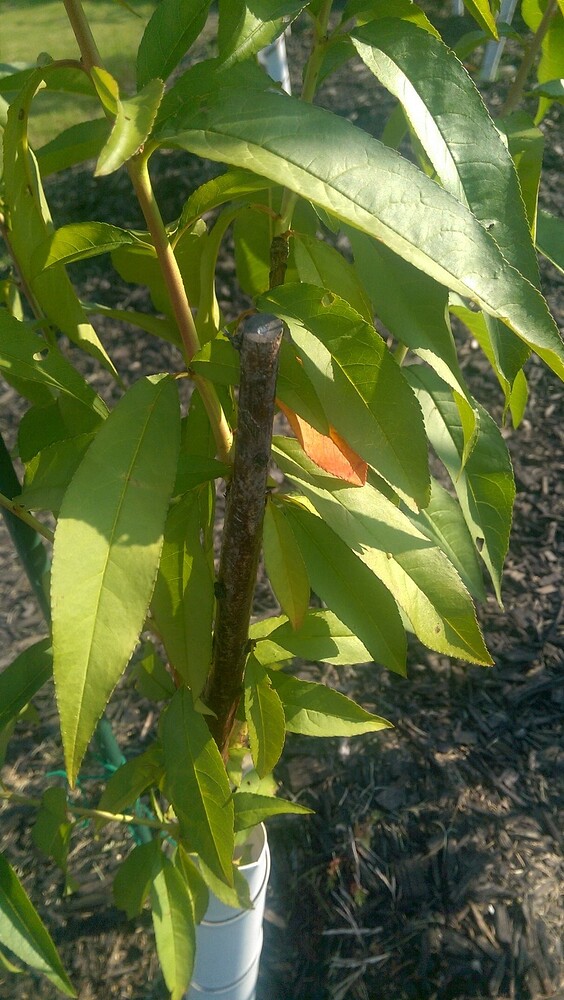 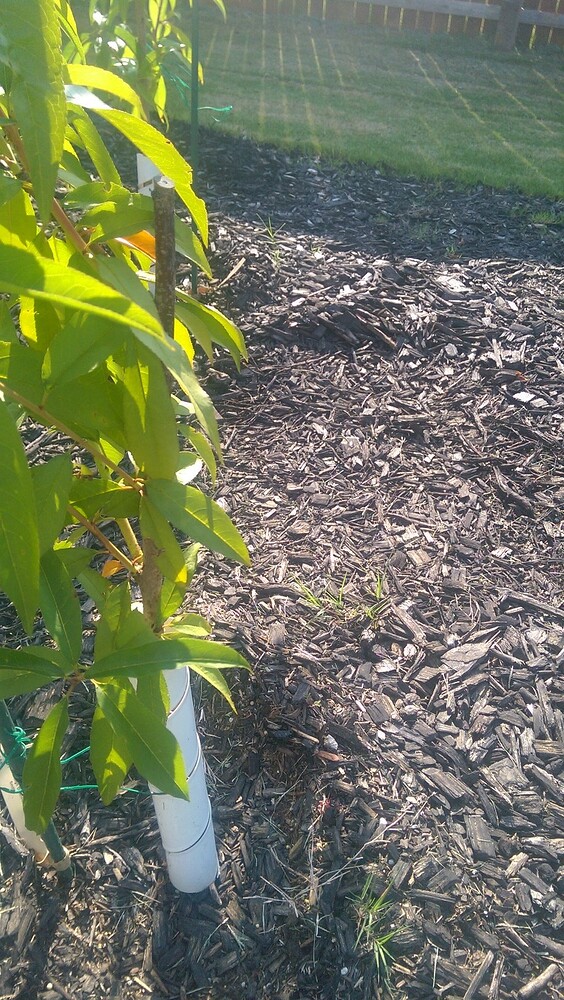 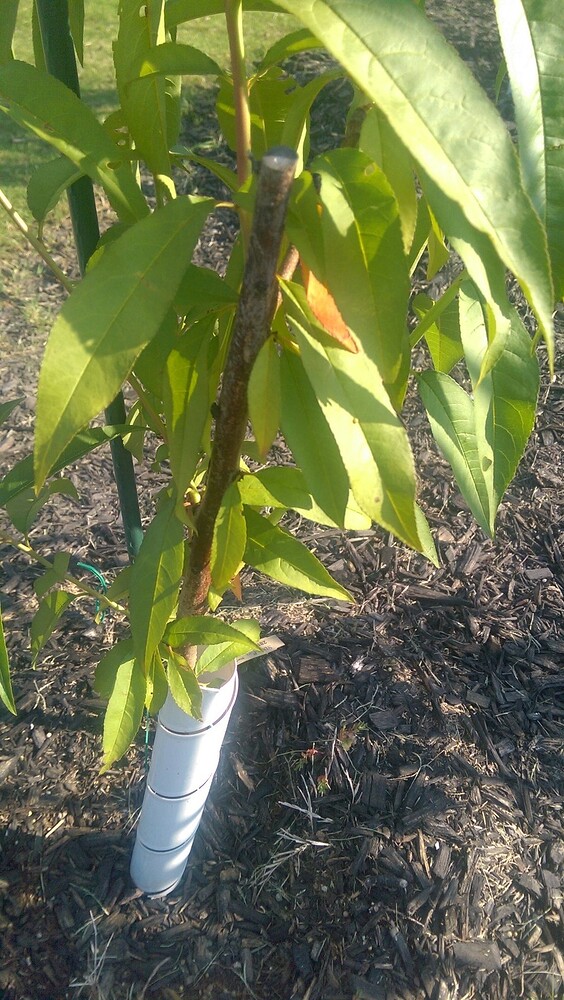 That always happens to a few peaches in my nursery. I just tape the strongest branch to the dead trunk above it with electric tape and start over. You don’t lose much time because at least the roots are establishing.

So you mean to take that top branch (probably the strongest) and tape it up next to the trunk so that is begins to grow vertical and it will become the new trunk and start branching from there?

You tape it up vertically and head it off to force side branches. It could be headed now or next spring. You could do that with any one of those strong shoots depending on what height you want the branches.

Ok, will do. Thanks everyone for all of your advice.

I’ve never had this happen, but just wanted to say that this is a very good tip. I can see that working very well and most likely wouldn’t have thought of it on my own.
So, tape it vertical and get it headed that way, then clip the top to force side branching and Bam…back in business. Cool.

Here is an update on what I did. I took a fairly long branch that was growing pretty low and tied it up against the trunk. After this branch solidifies itself as upward growing I am planning on cutting the main trunk back to the start of this branch…is that the correct move? 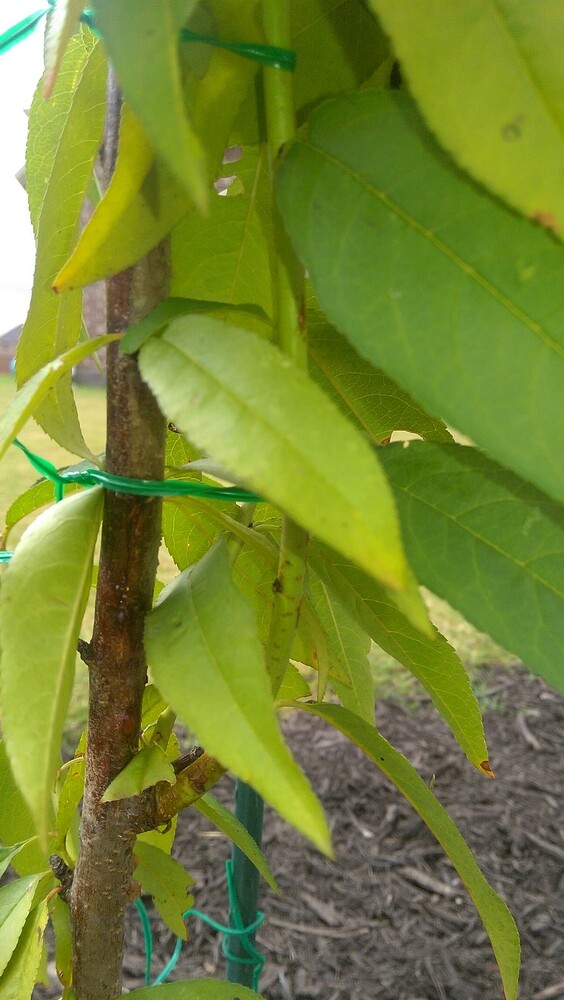 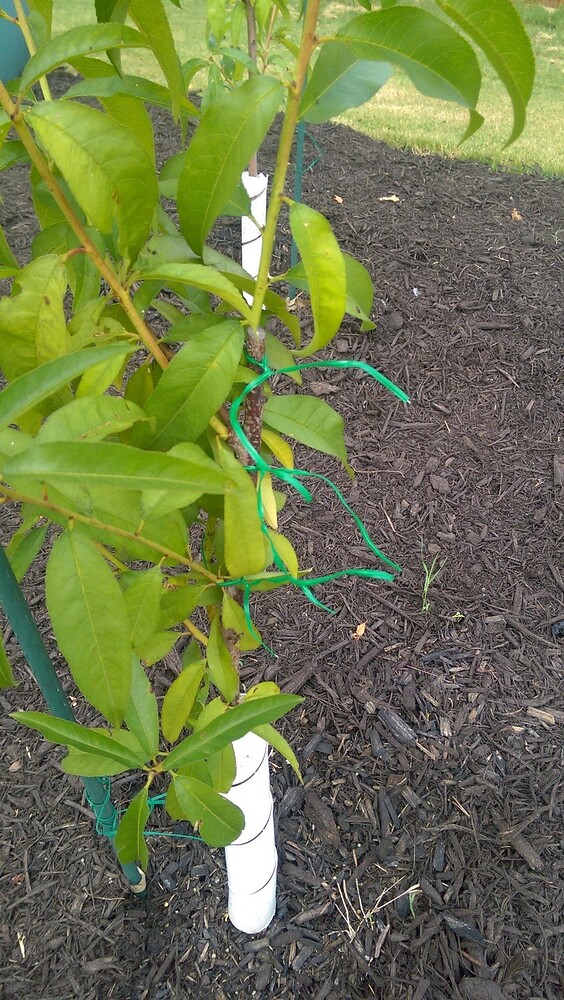 Give that poor baby a little soluble N while there is still time. Or is it too wet?

Get rid of that stake too.

Get rid of that stake too.

Why is that FN? I stake everything. I probably would have had a t-post by it.

We had 18.4 inches of rain in May, what are you seeing that indicates a need for Nitrogen?

The pale green color indicates lack of nitrogen. 18 inches of rain will leach it out of well drained soil. In poorly drained soil it can also be lost by other processes.

Looks just like what I have done. The tree will end up just fine, you’ll just lose a season. But look on the bright side, if a low branching tree is what you’re after, here is your chance to do it YOUR WAY, not settle for what the nursery gives you.