My neighbor has an old pear tree in his pasture that is loaded with pears. Way more than you can eat or even can. I was wanting to try and get some to make some pear wine. Has anybody ever tried to make any pear wine? I knew a few people that used to make it but they all moved away. I figure I have nothing to lose by trying. right now I have about 13 gallons of wild muscadine grape wine fermenting. I am wanting to try making other varieties. I wanted to make some wild plum wine this year but my plums got frozen when they were in bloom.

A friend of mine made some pear wine, it was ok, I prefer his wild plum. I might use it as a base and put something else in it to kick it up a little like whit grape pear or cranberry pear.

Look up ‘recipes’ under “perry.” There’s a lot of good info out there.

As LTCider mentioned, are we talking perry or pear wine? Perry would be fermented pear juice, pear wine would have added fermentables to increase the gravity. Perry is pretty straight forward, I never add anything except yeast. When I make fruit wines I boost the gravity with honey (I guess that technically makes it a melomel, but a fancy word like that might scare my friends away from helping me drink it all).

My pear cider recipe is 4 gallons apple and 1 gallon pear juice. For all that pear seems like it has a delicate flavor, even a few of them easily overpowers the flavor of apples.

We picked wild plums today for wine making. It was hot dirty work but we came away with 42 pounds of plums. Should be a nice wine to try next fall.

Pick them while they have the hardness of apples. Grind them one day with pectic enzyme, and press them the next.

I just went and picked up about 5 gallons of pears. I am going to experiment this year and see how they work.

Perry is essentially fermented pear juice.
F
Pear wine has sugar added to take it to 10-15% alcohol vs 4-8% or so for “just” perry. Similar to apple wine vs hard cider.

We have a lady near us who has a couple pear trees and we usually wind up with two or three banana boxes full of pears that we use for making wine… For that variety at least we just cut up enough to nearly fill out a 10 gallon fermenter in a bag and add sugar water and nutrients and tannin to appropriate levels as well as campden and yeast. That usually winds up making around six or 7 gallons of wine at a time, it comes out very musky and heavy bodied…could probably cut the pears back a bit. To myself and most of the people who tried it it’s remarkably like Chardonnay.

We just slice the pears like a quarter inch thick, cut only the seed part of the core out, and everything goes in the fruit straining bag. At the end you have a sludgey bag of shin and pulp/grit.

I have tried very little pear wine but what I did try musky was an understatement, it was skunky but still not bad.

What effect do you feel aging has to do with the taste of perry or pear wine? I have a couple gallons of 2 month old pear cider (had a small amount of sugar added to bring ABV to about 7%)…It is OK in flavor now but was wondering if it will improve if I give it more time.

a lot depends what’s going on…2 months from starting fermentation?

In my hands pear doesn’t seem to be a great aging wine, but should keep at least a couple years. And lots of things can impact a wine (not ignoring that you made perry, but I make way more wine than cider):

Sulfite can take awhile to moderate if you over-sulfited. If you WAY over-sulfited, they probably won’t ever moderate completely.

Especially if you didn’t use sulfite at all, you can pick up any number of hitchhikers including brett bacteria, acetobacter, etc., those flavors are largely baked into the finished product and not going anywhere.

Hydrogen Sulfide (H2S, think the smell of rotten egg) can come from prolonged contact with lees at the bottom of your fermentation primary or secondary (same principle as rotting muck at the bottom of a lake) or also from stressed, nutrient-deficient (and sometimes nutrient-overfed) yeast themselves.

Underripe pears might extract some unpleasant tannins (I have a terrible wild black cherry wine right now from that) and too little acid or tannin may make a flabby or relatively insipid wine/cider.

Too little fruit can make things pretty boring (was it 100% pear juice?) and traditional, non-perry pears will be like making hard cider from Motts apple juice, or Gala apples…they lack a lot of the structure you need to make a great cider…or perry…or wine.

So I can’t say what’s underwhelming you personally, but for starters is the batch “OK” because it’s insipid and has little character, or because there’s some pear there and some “off” flavor(s) as well? Because those 2 options take you down 2 very different trees of probably cause. They also may play a role in the relative probability that you’re going to gain something by cellaring the rest of the batch a few months. This batch is obviously done, and waiting a bit won’t hurt, but knowing what you aren’t liking would perhaps help pinpoint things to change next time, and possibly “in the glass fixes” like serving it w/ a squirt of lemon juice, for example

no, add enough pears and I could see “skunky” as easily as “musky.”

To me it is very much like a non-oaked chardonnay on steroids, and it never tastes “bad” but I’ve made a few batches where I have literally thought maybe in a perfect world the pear content would be reduced by like 25 or 30% to make it lighter

Thank you for the in-depth reply. “Insipid and has little character” is a good description of my pear cider. I guess I wanted the “bite” of a good Apple cider. It was made with 100% Baldwin pear (no water), which was extracted using the omega juicer/extractor model 8004. I used SafCider yeast (first time…I usually use Lalvin 71B for all my fruit wines and Ginger beer). Primary fermentation lasted eight days, at which time it had a specific gravity of 1.002, and then I racked it into two 1 gallon carboys. They have been aging since at 56 F. I still have enough frozen pear pieces to make another 3 to 4 gallons, hence my interest in making something I really want to drink. I have never tasted pear cider before, and perhaps my cider is typical…But I feel it needs something to make it exciting (lemon, ginger, cardamon, etc.). No musky smell or bad flavors…just not exciting.
On another note, I made my first ever batch of fig wine. I don’t think there is any redemption for it…I tastes like Sake. I used 4 pounds fig per gallon, but it has very little fig flavor.
Glad to see some other people that have brewing interest in this forum. I don’t like to waste any fruit, so brewing is a good way to deal with excess. Mulberries and Blueberries are my main brewing fruit, as I get tons of both. People are always amazed at my wines and I wind up giving more away than I drink myself. I tried Elderberry for the first time this year and I was surprised how good of a wine it makes (even without aging). Mulberries ferment to dry, even at the rate of 10 pounds of fruit per gallon (but I usually use 6 pounds), but I never can get Blueberry to ferment dry (less than sg of 1.002)…Which is OK, because people seem to expect it to have some sweetness.

I started a three gallon batch of peach wine back in June. I had two gallons of yummy sweet pure peach juice from my peach harvest and added store bought juice/sugar to make three gallons. I have racked it into three one gallon jugs. I feel like I have lost most of the peach flavor and am not sure what to do with it. Stabilize and back sweeten for sure but I would like it to have more flavor of some kind

I was having a glass of pear wine while reading this post. I used maple syrup from our property as a sweetener. I had tons of Bartlett pears so I tried a wine with them. I won’t bother with details because the wine isn’t great. I think I like it because I know the work that went into it. Others say “It’s OK”. 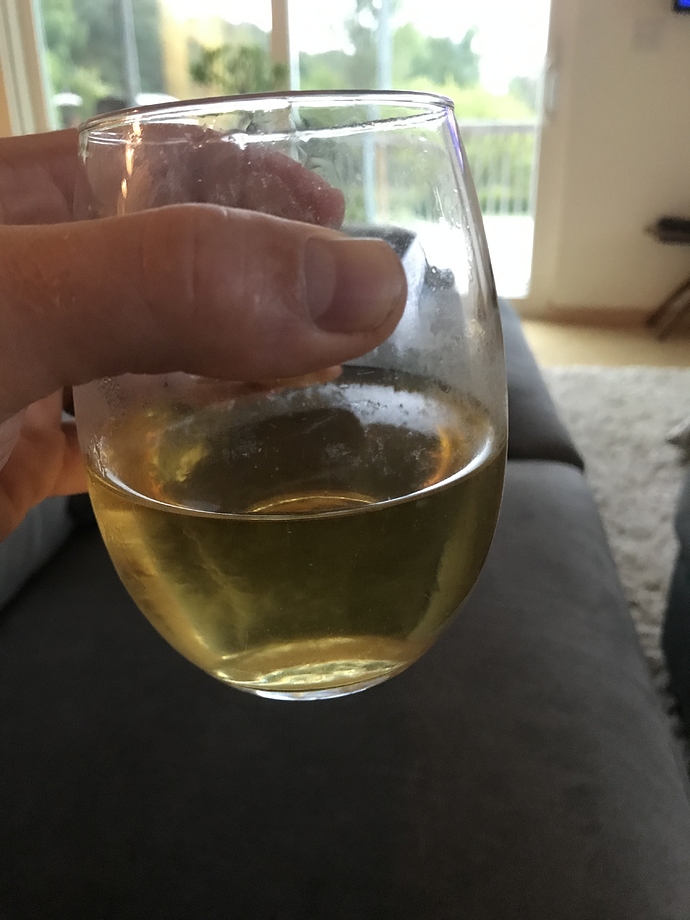 If you’re making it with Baldwin that’s probably kind a like making a cider from red delicious; it’s just not going to be very complex fermented because it was an eating apple Selected for low tannins, low acid.

Just like there are specific cider apples there are specific perry pears. You can try to get around that in any number of ways including adding tannin/acid to your pairs at the time of fermentation, Adding acid blend in later, mixing in other fruits like raspberry, etc.

Personally I think your best bet is to add shitty wild pairs at like 10% of the volume…Your next bats are to either add crab apples or to add extracted Tannin and acid back in, Depending how comfortable you are with introducing Apple character into your Perry.
The bottom line is you just need some way to dress up what is largely sugar-water with some pear aromatics, Because that’s what eating pears and apples largely are

That said I am giving you general rules, the pairs I make wine with are some sort of an eating variety. I don’t know if fermenting them on the skins is adding a lot of time on an acid that you’re not seeing, or it’s a different variety, or the alcohol is changing the perception, but everything I told you is sort of general concepts in the difference between hard cider and Sweetcider for example

I feel like I have lost most of the peach flavor and am not sure what to do with it.

Even though I have a couple large peach trees, I harvest almost zero peaches. Squirrels love peaches and the low, open structure of a peach tree makes it almost impossible to defend. The only peaches I get to keep are the ones I pick unripe. Long story short: I have never made peach wine…But I bet your peach wine is better that my fig wine.