Pears that Can Ripen on the Tree like Gem

Gem is a new pear developed by Dr. Richard Bell is newly released by the USDA . It is highly fire blight resistant and is very productive at an early age, however what interests me the most is it can ripen on the tree and be eaten fresh off of the tree. (I have planted 2 Gem pears and awaiting harvesting some in a couple of years). 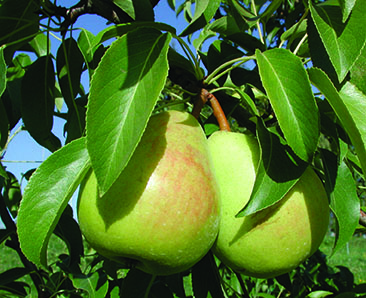 What a Gem! A pear that resists fire blight

Gem is a new fireblight resistant pear tends not to russet.Gem, a new fire blight-­resistant pear variety from the U.S. Department of Agriculture’s breeding program, was officially released this spring.The pear is medium sized with light green skin...

I know Asian pears can be eaten freshly picked from the tree. They are not fireblight resistant.

That sounds nice. I almost never time it right. Im either too early or they are rotting from within. My best result seems to be just wait until color starts to change, then can them. That way they are still firm, and canning seems to bring out their flavor. Plus, I get to spread my eating over a year.

I wonder if Gem is patented. Some scion for existing trees would be nice. I already have six pear trees, Asian and European, so not looking to add a whole tree.

Hopefully you will enjoy this older thread where igem was originally discussed. It may have something in there worthwhile.
Where can i buy the new pear 'gem'?

Summercrisp aren’t that great of a fresh-eating pear. I freeze them for pear crisp, which we really enjoy.

Most early ripening pears — those that ripen before Bartlett — can be ripened on the tree.

Well, just got 20 gems on ohf84 for sale at Cummins for 18.73 and a couple pixie crunches for my Sundance. Clark, I told my wife you said she’d love them, so Im off the hook…I see it ripens on tree. Any other results?

I looked for a patent for the Gem pear tree and could not find one.

I suppose it may vary from region to region and even season to season, but Seckel, Bosc and Harrow Sweet all can be ripened on the tree here and reach highest quality. The point of harvesting these earlier is to improve storage for me.

Be aware that Gem has a crunchy texture, somewhat similar to Asian pears. If you store it longer it becomes soft like Euros, but it loses flavor and becomes bland.