I just bought a bunch of pecan trees and am not sure when would be best to plant them. Zone7, just south of Albuquerque NM.

Last year, I planted dormant bare root pecans in March and they all died. I’m not sure if it was a very late hard freeze we had in late April, the variety, or something else, but I’ve successfully planted almost 30 bare root fruit trees now, so it was kind of shocking to see none of the pecans make it.

I decided to start over this year. I ordered Pawnee and Kanza pecans, on the NMSU extension service’s recommendation. They went to a nursery in southern New Mexico – I was supposed to pick them up as bare roots in January, but there was a mix-up at the nursery and they ended up getting potted. I just drove down there to get them last weekend to get them, and they are starting to leaf out and look pretty good.

My hunch is that I need to wait until they have more of a root ball before transplanting them. Given that they were just put in the pots in January, when would you all recommend planting them? If I have to leave them in the pots for an extended time, any advice on how to baby them? 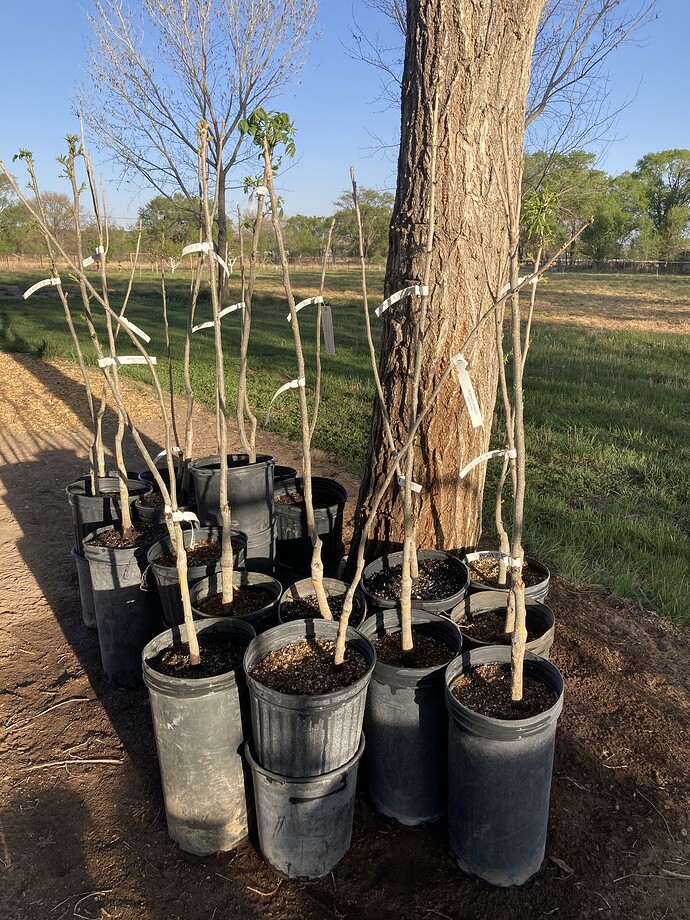 yeah…if they just put those sizable trees in those pots in Jan., and they’re already leafing out, I’d wait til fall to plant. Be sure to keep them well watered; some growing media will drain and dry rapidly.

Pawnee would not be a recommended variety here in the east, anymore, but scab pressure in NM is likely so much less that it’s a real star there!
We had a Cooperative Extension Ag. agent here, some years back, who was a NMSU grad. Most folks in this part of the world didn’t realize how big the NMSU pecan program is.

Thank you for your input. Yes, the pecan orchards in southern New Mexico are amazing!

I am torn on what to do-- I have been getting conflicting advice. NMSU is suggesting I plant them now as bare root, even though it would have been safer to plant before leafing out. But I am afraid of losing my investment. If I keep them in pots until the fall, my idea is to pile some mulch around them to help keep them moist.

Yep, my first thought was to plant right away, mulch well, and keep well watered…but that’s what I’d do here and your climate is very different. I’d hate to miss a possible year of growth keeping them in the pots. Digging holes that depth is no small thing. Maybe someone from your area can give the best advice but it may be a gamble either way.

I agree with others that moving them as they are leafing out is tough on them .
But if you removed all green leafs now , dig all the holes quickly ,transplanting and water very well I would think they would be OK? Most trees can withstand leaf removal at that stage and bounce back .like a late frost.
Not the best idea maybe ? But that’s my thoughts.
Or keep in pots till fall ?

Decided I’m going to try what seems like the safer route and leave them in the pots. It’ll be a pain, but if I water at least daily, pile mulch around them, and plant in September I think it’s less risky. I’ve already been through losing a bunch of pecan trees once… not inclined to go through that again.

I often make a frame lined with plastic, set the pots in that and try to maintain a inch of water in there.
Simplifies watering and keeps them from rooting into the ground below

It is tough to keep pecans growing vigorously in pots. They don’t get the right nutrients. Consider getting a micronutrient fertilizer to help.

IMO, I would go ahead and plant the trees now and plan to water them daily in the ground. The battle with pecans is to keep the soil moist so they don’t dry out. They have a very limited root system as bare root trees.

You did not state the source of your trees. Were they from a NM nursery grown on adapted rootstocks like Riverside? The reason for asking is because high ph soils are common in NM. Eastern rootstocks generally don’t deal with it very well. Also, the varieties chosen - Pawnee and Kanza - are northern adapted. They should work for your area but again there are possible rootstock concerns.

The trees originally came from Texas Pecan Nursery, a wholesaler in Chandler, TX. Not sure about the root stock. When they accidentally got potted at their next destination they also received fertilizer, so I think they’re good for now.