Here’s a recently-harvested fruit from a Peggy Pear, a bud sport of A-ri-rang, which seems to be only carried by Stark Bros. at present. It is little talked about, so thought I’d post this. 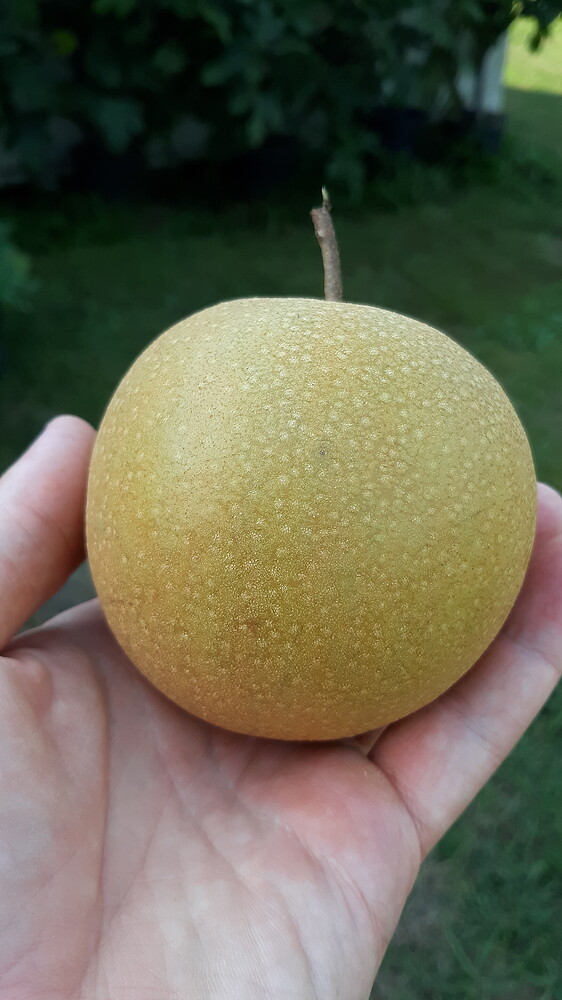 20210913_1703512322×4128 1.4 MB
This is from my mom’s tree, and it’s been in the ground for a few years. It started blooming slightly before Large Korean this year, but lost most of its bloom to a late freeze. It did bear the above single fruit—its first. It was crisp, moderately sweet, juicy, with just a touch of acidity—very pleasant eating! Some grit cells, but not too bad—and no one here is much bothered by pear grit, anyway. Seems to have similar disease-resistance to its parent, with only very minor fireblight strikes so far and no other issues to speak of. Good, straight, sturdy growth habit, reminiscent of Large Korean. It does indeed ripen before Large Korean/Olympic/A-Ri-Rang—ours are coloring up but are not quite there—and has a noticeably different skin, being golden and rough-textured.

What do you think of Peggy? Please share your experiences and impressions!

If I had that “40 acres of ground every buddy around called lower 40”, I would try all the pear varieties available. I had no idea how many there are.

The Peggy pear tree I planted from Starks died to the ground from firelight.

Well, that may not bode well for the one here, long-term. It’s done well so far, but that could be dumb luck—or (with better luck) maybe a difference in the dominant strain of the bacteria in our regions. I figured you had probably grown it, Clark, and was hoping you’d chime in; I’m sorry to hear it didn’t work out, though.

The Peggy pear tree I planted from Starks died to the ground from firelight.

I think they sent me your twin! Same result that first summer. It was sent out sick. I let the rootstock regrow and it seems fine.

Well, that may not bode well for the one here, long-term.

I think you could be fine… at least for a while hopefully. We heard they had troubles with FB on their trees that year.

Yes every pear they sent me had firelight which was a large number. I did not ask for a refund but have not ordered more pears from Starks since then. I’ve ordered other things from them before without any problems. If I was starting out it would be different but my orchard is large now and I just can’t take the chance. Fireblight is not terrible. My biggest concerns are things like Spotted lanternfly. Spotted Lanternfly | National Invasive Species Information Center