Persimmons are one of very few fruits I don’t like, and I know very little about them. However, my wife likes them and she asked me whether we can plant one or two trees. I’m in Northern California, Zone 9b, mild wet winters (rarely below 27F), very hot (up to 105F during heat waves) and windy summers, heavy clay soil, 700-1000 chill hours, we use drip irrigation for most of our plants. Can please somebody educate me which persimmons would be good for my climate. I think we want a non-astringent variety, but I don’t know enough to be sure. The main criterion is the quality of the fruit, then ease of care (resistance to diseases, pests, etc.). Do I need another variety for pollination? What’s length of the harvest season? Which rootstock to use? Thank you all very much!

You can’t go wrong with Fuyu or Jiro for a non-astringent, self-fruitful cultivar – this is your standard variety your wife is likely used to eating. There are 3 main rootstocks that can be used for a Japanese persimmon – Diospyros lotus, D. kaki, and D. virginiana. You’re most likely going to be choosing between D. Lotus and D. Kaki from a nursery bought tree. D. Lotus is less tolerant of heavy soils. All 3 are fairly drought resistant. D. Virginiana has a tendency towards suckering. I’m using seedling D. Virginiana in San Diego on a Clay/loam soil.

As for what is sold in retail nurseries, Fuyu and Jiro are the same cultivar. They should perform well in your area. I would recommend D. kaki rootstock because asian persimmons are found to have a longevity problem on D. virginiana rootstock. Another choice for growers in your area is Izu – however it is a bit fussy and requires a patient gardener.

The ripening order for the “Fuyu” types that you can find easily is Izu, Jiro, then true Fuyu. Now normally is heading towards the end of these. This type can be eaten crunchy and still be sweet. Burndt Ridge has a decent selection. As others have mentioned, Jiro is the most common and, of the three, I think most would say best-flavored.

Acorn-shaped Hachiya is the astringent variety that you’ll see often grown and in stores now. It can hang on trees in N.Cal. until the new year and its season generally starts around now. It is only edible when mushy. If your wife wants to cook with them, then you probably should consider it. Search the forum for other cultivars of each type; they are numerous with many others favored by connoisseurs.

The will grow easily and generally not be bothered by insects, bacteria, or fungi, etc. in N.Cal. Birds will go after them, though. It’s probably a good idea to stake the tree for the first few years, as they can put on more height than the growth can support and can be prone to small limbs snapping under their own weight in windy conditions. It will take a little longer to come into regular bearing than most stone or pome fruit.

If you have nothing planned for tomorrow morning (Saturday Nov. 5), I believe that the annual Wolfskill persimmon and pomegranate tasting is taking place at:
U.C. Davis Wolfskill Experimental Orchard
4334 Putah Creek Road
Winters, CA 95694
Starting at 10:00.

I don’t want to go too far off topic but do you know the difference in lifespan between kaki and Virginiana rootstock? Are the kaki rootstocks from seedling?

@bradkairdolf yes all the species rootstocks will be from seed.

@Stan no you do not need pollinizers. A single tree will produce large crops. I’ve read there are female cultivars that do need pollination but none mentioned yet. I believe ‘Szukis’ is one. The problem with having males among the female cultivars is you go from seedless fruit to fruit with seed. An authority on persimmons, Jerry Lehman, told me that he learned many years ago that males are unnecessary. So, try to keep males out of the equation.

I don’t want to go too far off topic but do you know the difference in lifespan between kaki and Virginiana rootstock?

The issue I raised is not a matter of rootstock longevity, but rather kaki fruitstock on virginiana here in the western U.S.

I would like to thank everybody who commented on this thread; all your comments are very helpful. I’ve returned today from tasting at the Wolfskill Experimental Orchard, and I have to say that all four PCNA types they offered (Izu, Maekawa Jiro, Matsumoto Wase Fuyu, and Suruga) tasted to me pretty much the same. I liked the one PVNA type persimmon (Mikatani Gosho) slightly more, but maybe it was just a little bit riper.

Here are some photos from the tasting: 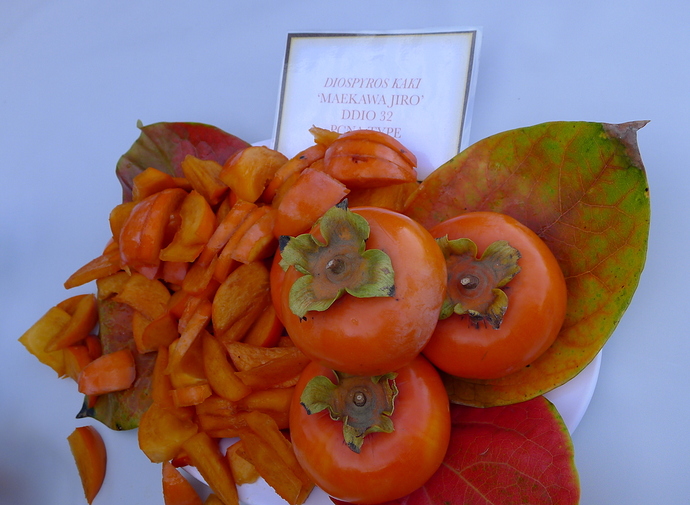 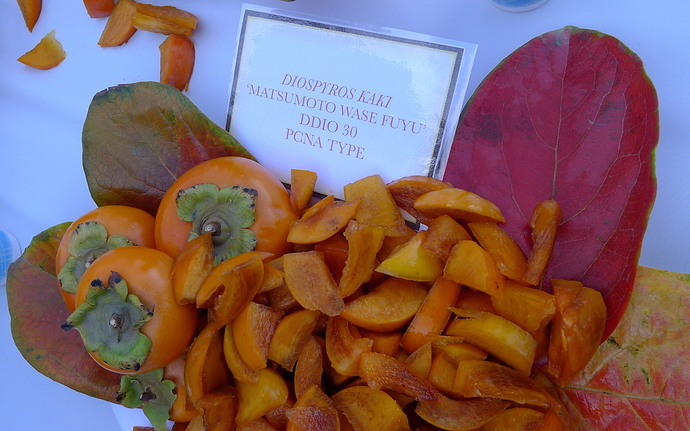 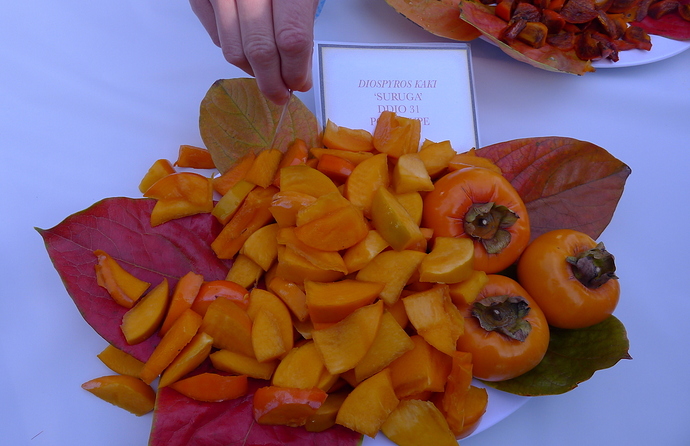 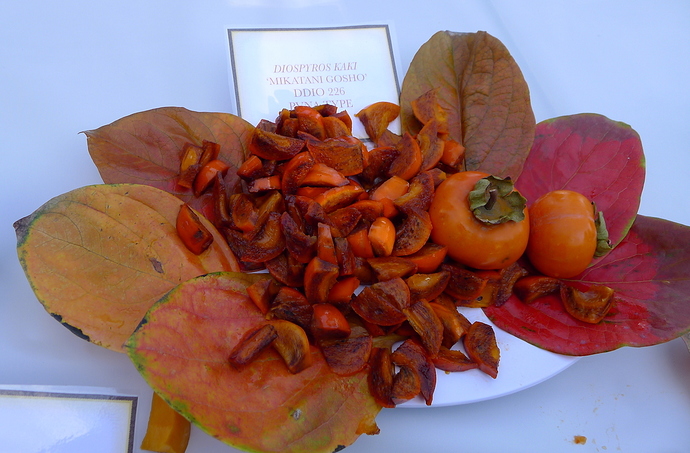 Honestly, in the bay area you don’t need a persimmon tree. Your neighborhood is likely loaded with persimmons and many people don’t eat them. Check/ask on nextdoor.com or search craiglist, or just knock on the door of a house with a loaded tree. I eat so many persimmons this time of year I get sick of them, have to dry a lot, all from neighborhood trees.

I would say the same for lemons as well.

Sorry, I wasn’t clear. You mentioned longevity of kaki on virginiana rootstock so that’s what I meant in comparison to kaki cultivars on kaki rootstock.

I think the law of diminishing returns applies to fruit just like everything else. I knew a guy who used to pick blueberries for a summer job. He would gorge on them at the beginning of the season but couldn’t stand the sight of them by the end. One reason I like to keep trees smaller, so that I get just enough to keep me wanting more.

A couple of decades ago there were a few large scale southern CA growers who produced Matsumoto Wase and Jiro on D. virginiana rootstock for resale. Many homeowners experienced fruit stock death within a few years.

Does anyone has experience with grafting multiple persimmon varieties on one tree to extend the season?

I have a couple of multi-grafted persimmon trees. The seven varieties American persimmon and a 5 varieties Kaki and Hybrids. I live in Zone 5 so there is not much about extending the season. They all get harvested in October to early November. Just beware that American persimmon tend to self-prune so you may loose a graft in the lower branch one in a while. I grafted mine on larger branches so no issue there.

It still seems ambiguous by longevity , could someone explain it??

I think that the question regarding longevity of kaki on virginiana is climate dependent. Such trees seem to be short lived in Izrael or California. But recently spaniards switch from lotus to virginiana as a rootstock for their Rojo Brillante. It is more drought and salt tolerant than lotus. In my climate in Central Europe I have several kakis on virginiana about 10 years old and no sign of decline. Will be topworking more trees in the future. In case of a sign of incompatibility I will use any hybrid as an interstem.

someone here in PNW has grafted multi types of asian persimmons on one tree. after many years he decided to give it away. so many people offer to come dig it up. i think he was tired of it. he had too much to eat he dried most of it. u think as long as you label it so you know if when it ripens and astigent or non astrigent it would save a lot of space. i would do something like that if i had grafting skills. thank you for sharing the photos of your taste test. were you able to obtain the gosho persimmon scion? it sure looks tasty

I realized that I don’t really care about flavor of any kaki. I like intensely flavored fruit and all kaki varieties that I tried are just too bland for my taste. I planted a few virginiana seedlings a couple of years ago and plan to graft hybrid varieties on them.