I’m looking for some advice.
Last spring I planted a Prairie Dawn persimmon. Early in the spring it was girdled by a rabbit. I thought it was done, but it started sending suckers up below the damage. This spring it’s growing again. I picked the best sucker that started above the graft union and pruned everything else off. I’m hoping to turn this back into a tree, but the stem is really floppy. It’s in a spot that gets sun most of the day so it’s not like the branch is bending towards the sun. It just doesn’t seem to have much structure.
I have never seen a persimmon tree before so I don’t really know what they are like. This one seems like the stem isn’t rigid enough for the weight of the leaves. Is this just how they grow? For now I’m staking it up and hoping the wood will firm up before winter. If I don’t, it seems like it will flop on the ground.
Any suggestions (including the option of giving up if this is definitely not going to work)?
Anyone else tried this variety in or around zone 5b (-15F)?
Thanks,
Scott

It may be that it is growing so fast because of being the only receiver of larger tree roots. I can’t speak because of a big difference of hardiness zones but I would keep staking it and try to provide weather protection for it. Even if it lignifies it is going to be very tender for winter. Just my two cents worth but that is way overpriced for what it is. @tonyOmahaz5 could give you better info…

Thanks! I hadn’t considered the impact of having more root than stem. All my trees grew faster this spring than the past few years so that lines up.
I’ll keep in mind winter protection if this thing looks like a tree in the fall.

I have a meader persimmon tree that was planted as a whip last year (2019). By august last year it was looking like a nice tree, with some feathering and new branches. A steer calf of mine went thru a fence into the orchard and decided that rubbing on the meader persimmon would be a good idea and broke it off at about 2 feet from the graft union. I cut it back to about 18" above the union and let it go into winter with no branches. This spring it sent out growth like crazy from the remaining 18" and i am seriously thinking about leaving it as a bush rather than train it into a tree.
The growth is pretty solid, but ive found that with my meader persimmons, staking is a must for a few years, as the growth seems rather brittle.

Hmmm. That’s an interesting idea. Will a tree turned shrub produce fruit? I would be fine with a shrub and it would save me the trouble of pruning the suckers that keep coming out… it seems like that’s what the tree wants to do, so maybe fighting nature isn’t the way to go?

I guess this is pretty much the same as pruning the whip short to stimulate low scaffolds.
I have suckers coming off both the rootstock and the variety. Would it be crazy to let both grow? Prarie Dawn is supposed to be self fertile so i shouldn’t need another variety for pollination. What are the odds that the rootstock would produce decent fruit that survive and ripen here?

Trained as a shrub it should still produce fruit. Fruiting is about time in the ground, not height of a branch. Im heavying inclined to leave it as a bush, so long as i can protect it from deer and raccoons, once the persimmons start to ripen.

@Kellogg_Hill_Farms
I have a meader, basically planted on a rock, with dust on top.

~15-?-20 years old .
It’s about 10 ft.
While the first branch is at~4ft.
( good to have room under / around tree to mow - maintainence I don’t want branches too low .)
I can still reach most of the fruit.
And with Meader , I often pick
( checking with a squeeze )
Fruit "on "the tree.
So being able to reach the fruit is good for Meader.
Other varietys , like prok, early golden. Etc…
I pick when they fall , so , off the ground.
Height of tree is less important , except for the splat…— factor.!
I have other Meaders not on a rock , that are taller.
But I find myself checking the dwarf , bushier , one on the rock more often.
So a bush form may be good.?
As long as you can mow under / around it.
It will want to be a tree , not a bush.
But could be a bushy --tree.

I think the odds of the seedling rootstock producing fruit, if the Prairie Dawn is the only other tree around, very low.

The seedling will either be male - may induce seeds in your Prairie Dawn and produce no fruit of its own - or female, in which case it would need pollen from another tree to produce fruit.

I think self-fruitful female is uncommon, and probably one of the key attributes of Prairie Dawn that led it to be trademarked.

Here is a picture of the meader persimmon. 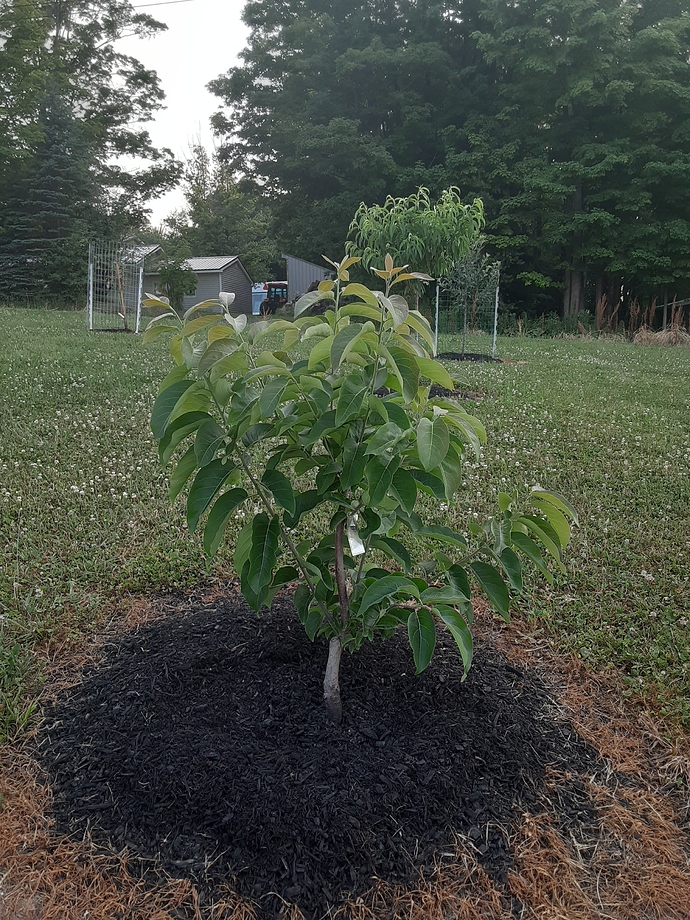 All the green is grown this year, some lower branching is almost 2 feet long. Shrub shouldnt be the term i use, rather multi stemmed tree. My plan is to have multiple main leaders go to about 10 feet and keep them there.

That looks much happier than mine.
I think I’ll try the same. I’ll let everything grow from above ther graft that wants to grow this year and going forward I’ll let it have several leaders that start near the base.
Thanks @k8tpayaso, @Kellogg_Hill_Farms and @murky !

Update:
The tree seems to have made a bit of a liar out of me.
Before I’d posted this i had pruned all but one sucker. At the time it was about 16" and growing at a pretty good angle. I propped it with a stick and wished it well (it’s not at my house so i don’t see it often).
Went back this weekend to wrap a rabbit guard on it and it has turned into a straight, healthy looking whip that’s around 40" tall. I’m liking the ideas here so I’m thinking next spring I’ll cut it at around 2’ aiming for low scaffolds that won’t be bad to mow under with a push mower. Pictures from July23 and November 14. 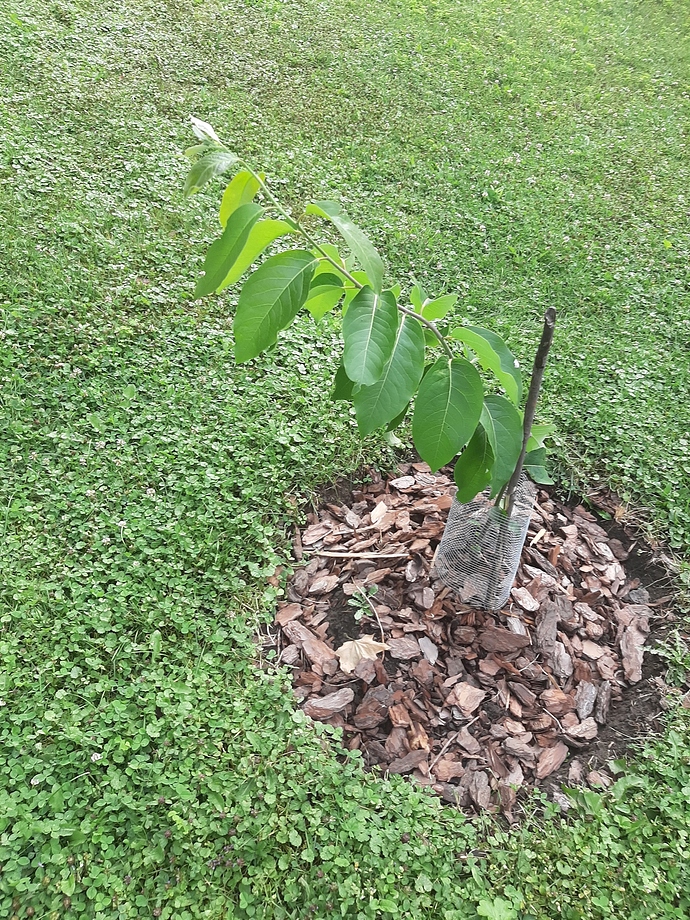 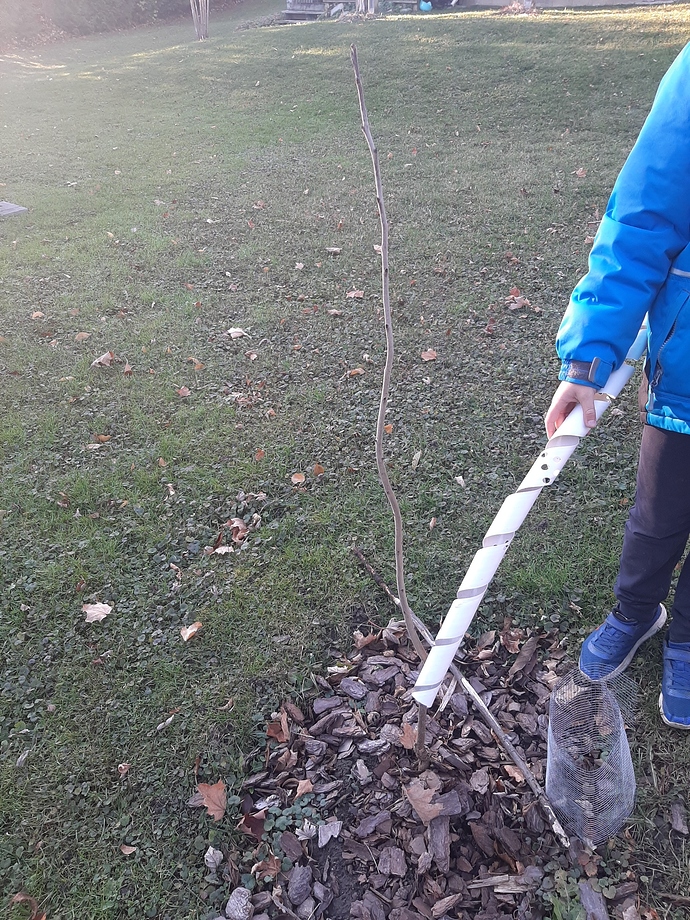 In my experience, it’s a major mistake to let rootstock shoots persist on grafted persimmon. It’s as if, given the opportunity, the rootstock will throw off the graft and dedicate resources to pushing growth on its own shoot only.

Hey,
may I ask you something?
You say that Meader has brittle wood. I would like to buy one, but I also live in a very windy place. Of course I would stake the tree, but I don’t know if this would be enough.
Where I live, we have often very windy weather in the spring and fall. Every year, there is at least one storm with wind speeds over 120 km/h.
Of course I would try to plant somewhat sheltered , but this can only do so much. So my question is: how windy is your place? Would you discourage me from Meader? And -if you have more than one persimmon- are all persimmons brittle?
Because I could buy Prairie Dawn or Nikitas Gift instead of Meader…
PS: I LOL-ed at your story with the steer calf. We have beef cattle as well and sometimes one cannot believe how destructive they can be! we had one cow that loved munching on grape leaves!

I live at the top of a hill, on the Chautauqua ridge just east of Lake Erie. I get strong winds and sustained winds into the 60MPH range on a regular basis. I have 2 Meader trees, 1 that us growing as a tree, which i have staked, and another that is grown in a bush form, which is not staked.

I wouldnt discourage you from planting one, just know ahead of time that staking may be needed to support the growth while it is young.

In my experience, it’s a major mistake to let rootstock shoots persist on grafted persimmon. It’s as if, given the opportunity, the rootstock will throw off the graft and dedicate resources to pushing growth on its own shoot only.

Thank you!
If you live at the top of a hill, you’re propably more exposed, so I am actually encouraged! I just want all this exotic (for me) stuff so badly, I’m like a magpie!

The American persimmon and pawpaw are little known hidden gems in the world. They don’t ship well so no one wants to touch them. I think you will be well pleased with it’s addition, but meader is known to have more seeds than some of the others you listed. I follow the european conversation a little and it seems pawpaw is now all the rage there. I guess to them it is the last untasted and new fruit in the world. And a good taste it is!

Seeds are no problem for me. As long as the fruit are tasty, I’ll eat around them!