In September of the last 2 years we have seeded our corn patch with a winter cover crop of “tillage radish” (diakon radish). Its a long carrot like radish that penetrates the subsoil up to a couple feet deep. In the midwest they winter kill but here it doesnt get cold enough, so we have to disk them under. Well today was the day. Crop really turned out nice this year. All that green material will compost down and add valuable nitrogen and organic matter back into the soil and come March we will plant out sweet corn crop on top of the results. Thought maybe a few of you might find it interesting. 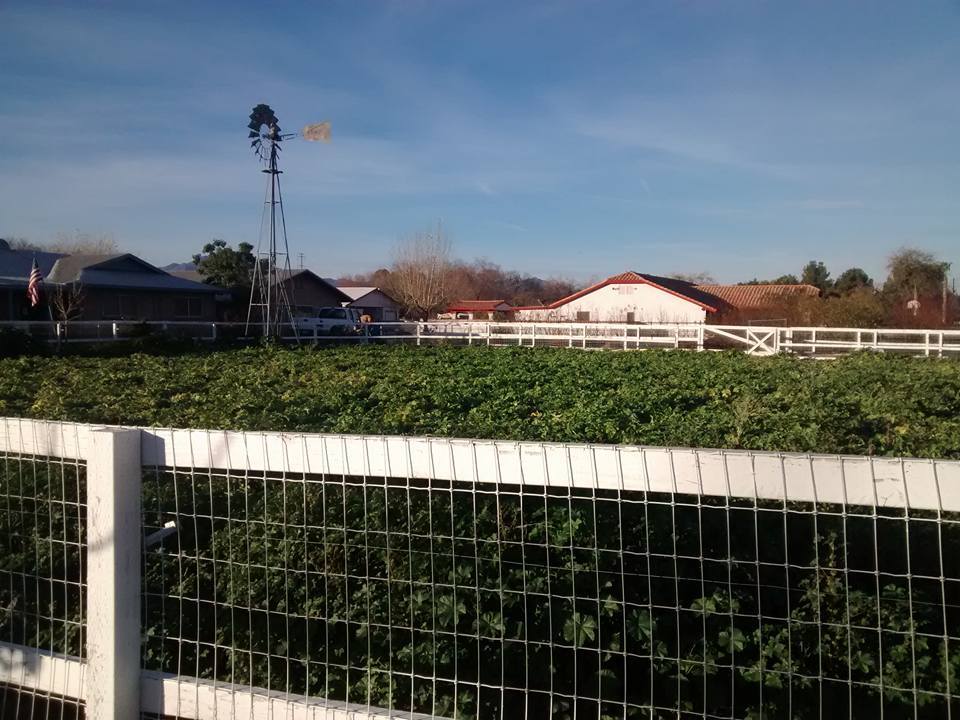 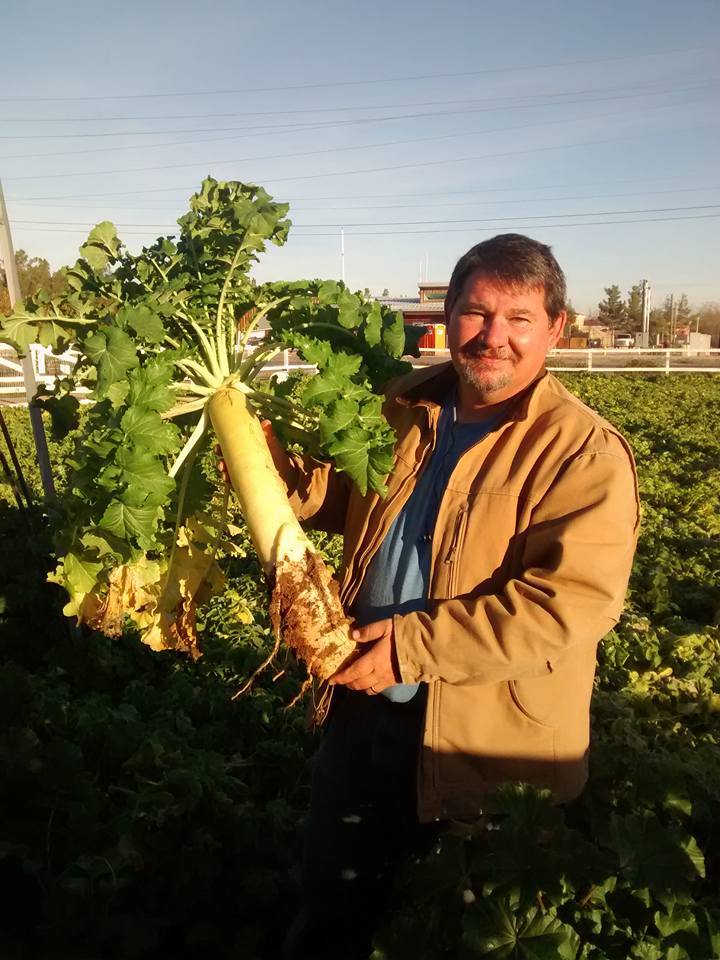 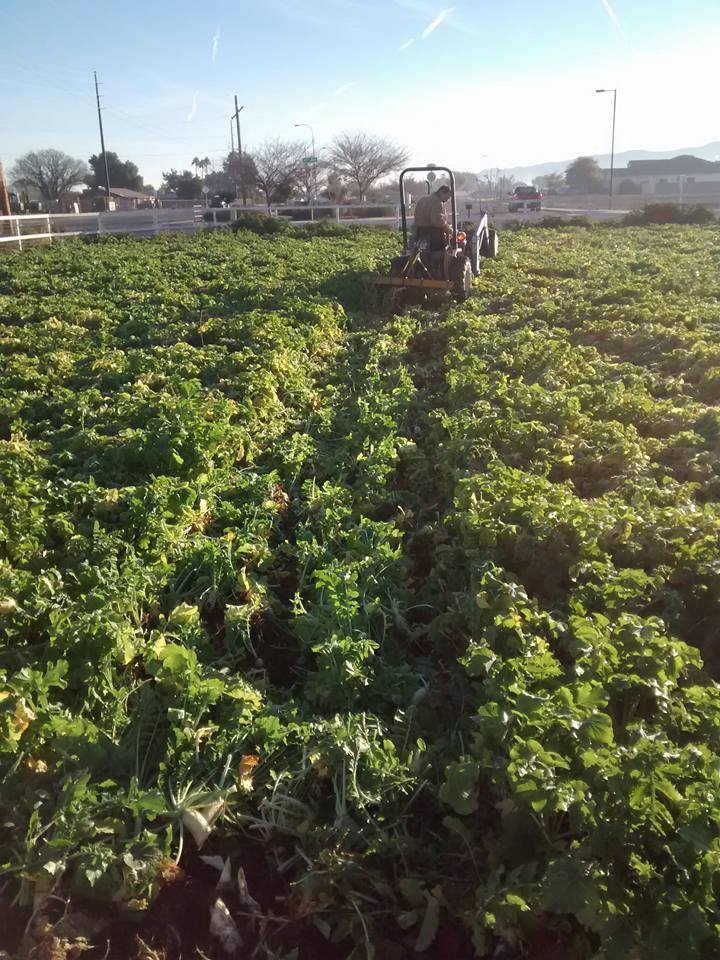 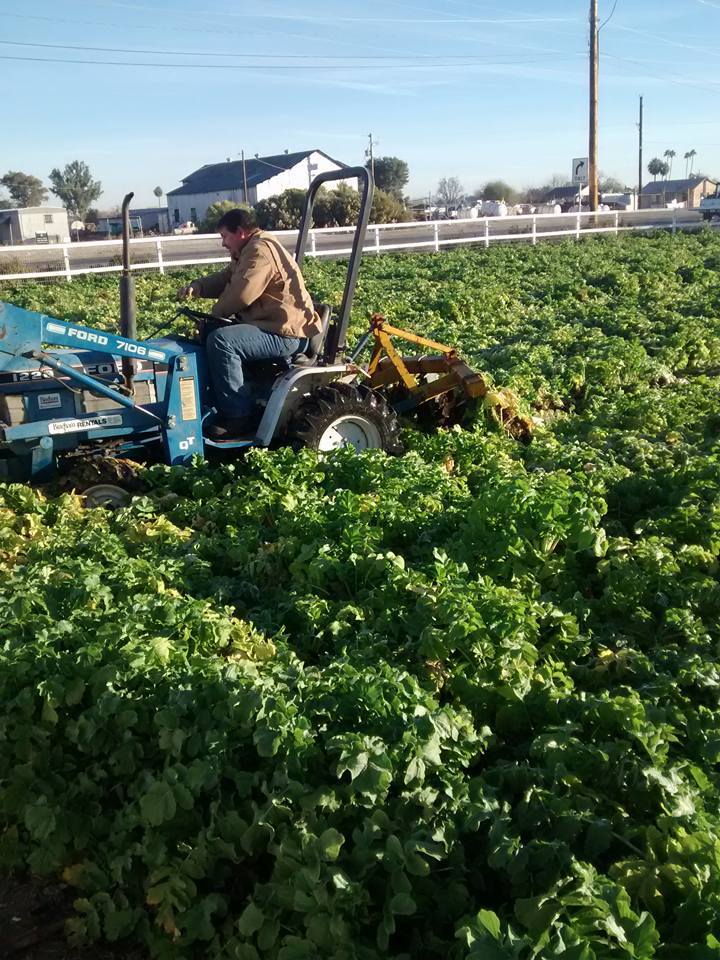 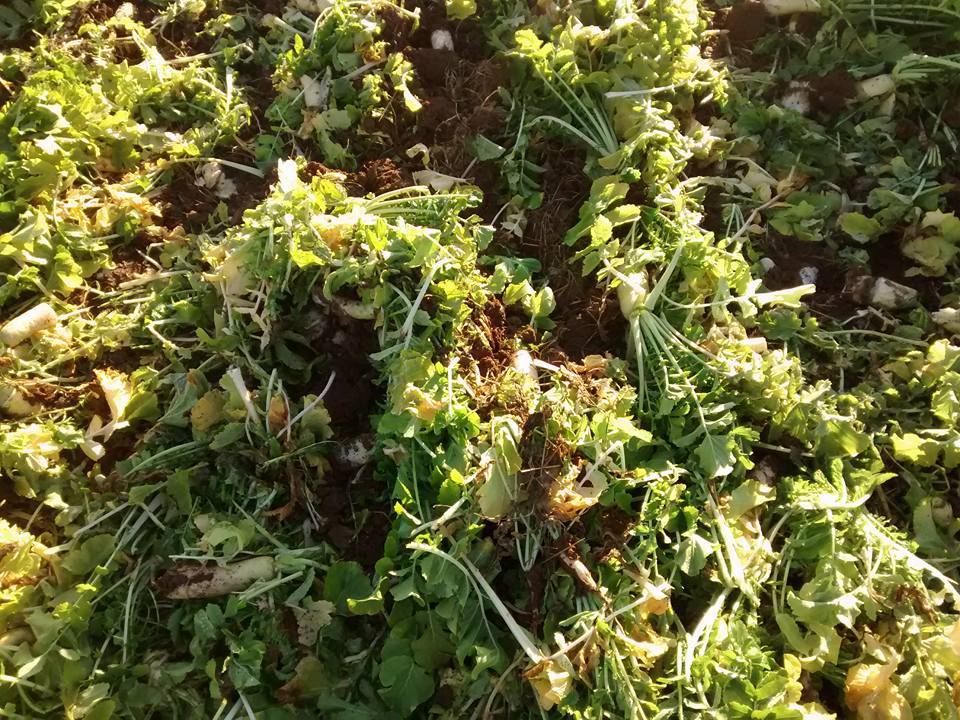 This attribute of decaying tillage radish just makes me chuckle. Im sure my new development neighbors are gonna love me in the next couple weeks. lol I have little sympathy for them…if you dont want to smell farming maybe you should stay closer to the city.

Those things are good eating IMO. I like them a lot better than the spring radishes and they sure don’t lack for yield!!

You grow the biggest daikon I have seen. We love eating those making clear soup, side dish, pickle, you name it.

Wish I live near you.

We had a lady make kimchi out of some of them last year. You should grow some this next fall mamuang! They are dead simple to grow. We dont really market them but always seem to have Indian people stop and ask to buy them anyway. Doesnt bring in much money but enough to pay for the seed. They use the greens mainly from what they tell me.

No really. When I tell people that im growing them just to till under its very common to have weird reactions from people like “that seems like such a waste, couldnt you put them to better use??” Personally I think enriching our low organic content native soil IS a good use. And besides, who in the heck am I going to sell 10,000lbs of huge radish to? Aint nobody got time for that.

As far as I know, people in the East and Southeast Asia eat the roots, not the leaves.

i turned a space for veggies into a small orchard since 2008. I have not grown any veggies since. I now am very tempting to build a raised bed but not sure where to put it yet.

I live on a small plot of densely populated suburb. We can squeeze a whole subdivision into the field you have there

.if you dont want to smell farming maybe you should stay closer to the city.

Reminds me when our local real estate agent was having a petition signed for a new development she was working with. They wanted the small farm near them to change some of their practices, I wouldn’t sign it. If you don’t like the smell don’t buy or build next to a guy that’s been raising pigs long before you moved there.

How hard is it to incorporate all that organic matter into the soil so that it can be used? Can you describe the process to get it ready?

Good video, they have planted thousands of acres here of radishes, very useful in breaking a plow pan layer in our soils. Never knew they would stink, makes scents:grinning:. Good luck with the slicks. Spread a little chicken manure, that’ll rile 'em.

Thats the beauty of using a deep penetrating root crop, most of the tuber is still in the ground there. I just cut the upper portion off with the disk. Those tubers still in the ground will rot in place, add nutrients and leave me with nice aeration holes after the process it finished. Ill leave that cut mix of greens, tuber, and mixed in soil there to rot and dry down for a few weeks and then disk it in again. Ill leave that be then until March when ill quickly hit it with the tiller to smooth the seedbed to make getting the seeder thru it easy.

That makes a lot of sense because of the long root. I’ve got to ask where do you get the seeds? The really old timers here grew rape plants or turnips and disked them in. Clover and wheat were what I used when building nitrogen and organic material for fields here to disk in. Alberta Lea seed is where I usually get that kind of stuff http://www.alseed.com/Pages/CropCategoryListing.aspx?categoryID=151

Clark, I cant remember what internet seed outfit we ordered them from. 1st year I was able to buy 10 lbs off ebay. Last year I was unable to to find smaller quantities so I ordered a 50lb sack from a seed supplier. Wasnt cheap with shipping but im set for the next 5 years.

There are all sorts of diakon radishes out there that other companies are selling. I only have experience with the genuine “tilliage radish” from cover crop solutions. They claim that their strain is bolt resistant. Cant say whether or not thats just marketing hype…

amadio - awesome radishes! I’d love to get some of those growing. I tried to sow oilseed radish for cover crop and soil penetration in some beds in my garden last year, but the roots didn’t get very big before they winter killed. How long did yours grow for to get like that?

We would definitely use some of those for food, but it is true that even one enormous daikon is actually quite a bit of food.

The radish is beautiful. I love them pickled. It does seem like a shame to just till them in and let them rot, but I understand your reasoning.

We get holes and critters when we try to grow radishes and carrots and such. I wish I could grow such nice looking ones with cover crop type effort.

We are just outside of Phoenix so we dont get cold enough to to see winter kill. We sowed them in late September this year.

Beautiful radishes! Those huge roots would sell like gangbusters at an Asian market. Roots like that should do a lot of the ground busting/tilling for you. Seems like a decent no-till cover crop. But since it’s not a legume, does it add enough N to the soil for corn production over time? Are you adding extra N at some point?