I think that’s close enough for this thread. I live about an hour northeast of Pittsburgh myself. It’s not like others aren’t allowed to comment anyway.

Welcome Jimmy! Glad to have another member close by. I’m almost as close to you as I am to Pittsburgh. There is a lot of great information on the forum, feel free to ask questions.

thanks all. I started a home orchard on my 3 acres. Currently I have around 40 fruit trees consisting of mainly apples, a few pears/cherries/plums but they are all 2-4 years old. This past spring, thanks to speedster1 hooking me up with a ton of scions of unique varieties, I have successfully grafted an additional 47 fruit trees. So, if anyone wants to do any scion exchanges or anything, I would love to participate or just help out others expand their varieties. I believe I will have around 20 apple varieties, 5 pear varieties plus a few cherry/plum types. I also have 2 unknown paw paw seedlings that a work friend gave me that came from a person in Bridgeport WV. I am trying to find out what type they are but am not having much luck.

Are the pawpaws grafted?

If that is the case, it’s possible they may be seedlings from an improved cultivar but are definitely not named cultivars. Pawpaw seedlings are not genetically identical to their parents as some other fruits are able to produce (I think some citrus can do that?). I would recommend planting them if you haven’t already and doing some research on which cultivars you are most interested in. This is a good thread I started which may be of interest.

To all of you interested in growing pawpaws, I have created a website to assist with picking named varieties and provide some background information on the Asimina triloba species. I was frustrated with the apparent lack of an updated list of available cultivars. There seems to be a huge influx of improved cultivars in the last ten years and I didn’t like going to 5+ websites to get information about all of them to make my decision on which ones to get for my 1/4 acre lot. As a novice I am su…

I’m looking to get some pawpaws, persimmons, and figs next year but my wife insists on trying them all before I buy them. Does anyone know somewhere local to try them out this year when they are in season?

Giant Eagle and Delalos have had persimmons in the past. There are a few wild pawpaw patches around that I plan to check out this fall, but I bet we have some members who could spare a fruit for you to try. @eboone might be able to hook you up with a fig sampling.

I personally haven’t tried fresh figs, but the endorsement by so many here convinced me to get some. I just went for it on the pawpaw front.

Welcome Jimmy! @wvuengr12 !
I agree
Your close enough.
I might be the one that’s actually closest to downtown City of Pittsburgh.I’m only 4 MI away.
In Brighton heights of pgh, close to Bellevue.

Delallos market in Jeannette near me has California Brown Turkey and Mission figs in Aug or Sept but they are not usually ripe or tasty. I have heard Trader Joe’s in East Liberty gets CA figs in season also but I have not had them

In Mount Pleasant the Sand Hill Berry farm/ Greendance Winery, a lovely place, has some quantity of Chicago Hardy figs in Sept and Oct. I would call to check on availability. They also have had American persimmons and are growing pawpaws but don’t appear to have a lot on their trees.

If you want to visit me in early Sept I could share a few figs, but not a significant quantity

I used to live in Pittsburgh,As of now I’m pretty close to Baltimore. All of the local Costco’s here in Maryland carry figs in season. They come from California, unfortunately in a huge box. I’m thinking 2 pounds, and thats a lot of figs, because they don’t store well. We like them, and they are decent, very sweet.
I’m growing figs right now, I have an unknown cultivar that my parents gave me. This happened when I was still living in Pittsburgh. My father was a received a small plant from old Italian Pittsburgher from south hills. . He used to dig it up and bury it sideways for the winter, but then apparently the winters get less severe. Here in Maryland we bask in at least one zone higher climate, so my figs are happy in ground, except every several years.

I can certainly give you a cutting. I could even bring you a plant, this weekend I’m planning to go to Pittsburgh, and then go on to Erie to pick some cherries go on a little vacation.

I know of many good groves of pawpaw surround here. And several years ago before a local festival in Frederick opened up, I made plans to go to the biggest Pawpaw festival that I know of, which happens in Albany, Ohio, which may not be too far for you to drive. It looks like a lot of fun. https://www.ohiopawpawfest.com/ 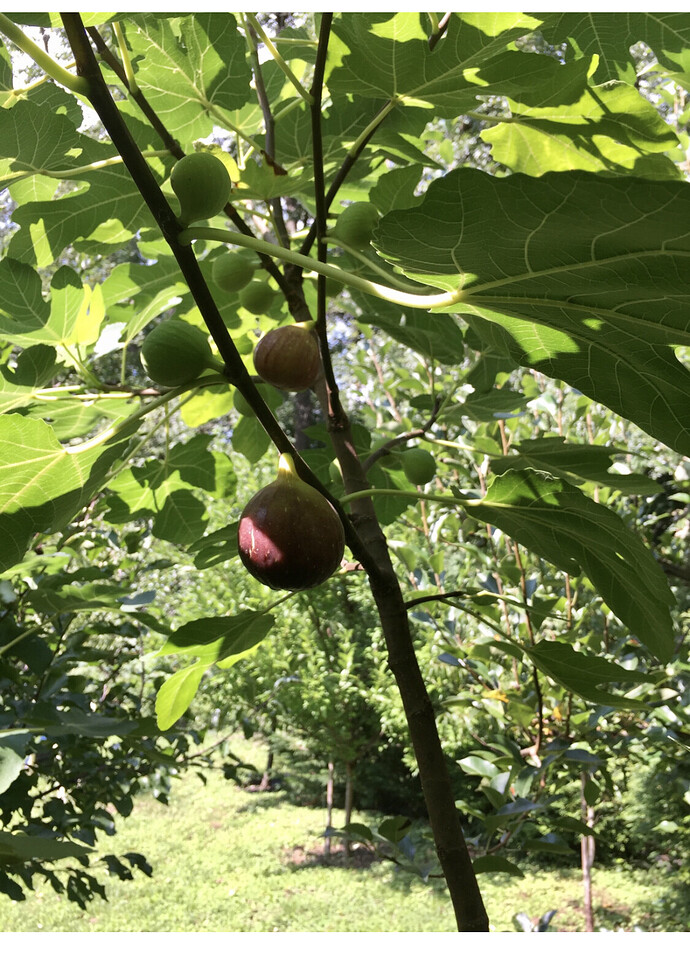 Thanks for the tips everyone, I’ll check some of these places out and if all else fails I’ll reach out again when fruit is ripe.

The pawpaw festival looks fun, definitely will check that out.

I also have a couple of spare rooted cuttings of ‘hardy’ varieties if you just want to grow one to try it, would be glad to let you have one

. I had no idea until a few years ago either! The pawpaw patch in Schenley is where I took my current profile picture. I didn’t find any fruit because I suspect it is a clonal patch that needs a bit of genetic diversity added to produce fruit.

Depending on how tall the tree’s are you could take flowers to the patch to try to have them get pollenated.

Checking in from the South Hills. Will keep this spot in mind later in the year for trades. We’re growing lots of weird apple varieties and just started collecting figs…

I just purchased about 50 acres a little north of the city and hope to establish a permaculture orchard/food forest on the land. It consists of about 7 acres of meadow and remainder is wooded. It feels great to finally have the space to experiment rather than having to be ultra selective due to limited space at my current place. I figure I’d post this here first rather than a more general thread because having regionally adapted plants is so important.

I have a pretty good list of species with low disease pressure but the allure of the more “traditional” fruits (apple, pear, plum, peach, apricot, etc) is hard to resist. Do any of you have experience with particularly disease resistant cultivars of the above mentioned fruits? I don’t really care about the cosmetic appearance of the fruits but would like vigorous, productive trees with no spray. I’m also looking for any recommendations on shade tolerant, deer resistant edibles as well as perennial edibles that I can plant in the meadow with an annual late fall mowing (was thinking sunchokes, primocane brambles).

Congratulations Jason, that is very exciting news! 50 acres is a lot of land to work with. Based on what you already have growing in your profile, I’d recommend propagating a lot of those selections.

I’d definitely look into persimmons as well. As far as lower maintenance traditional fruit, there are a few choices that are better but based on everything I’ve read,most take a bit of tlc in the form of spray to produce a decent crop. That said, is your opposition to spray based on chemical usage or just limiting maintenance time? That is an important factor to consider. I personally don’t want to use harsh chemicals so I have picked up a few organic and less lingering options that Scott has suggested. If the objective is a “no maintenance” situation, then that changes my suggestions. There are certain things like Surround and diatomaceous earth that are literally just clay or naturally found substances which can be greatly beneficial to getting a crop without any real chemical usage.

My thoughts on “no spray” is multifactorial. First, since I’m starting everything up from scratch I’d rather take the time now to figure out the most disease resistant cultivars and hopefully save me some effort in the long run. Second, I don’t want to be dependant on pesticides. Third, I also could care less about my fruit looking like what I can get in the supermarket and feel that fruit that has been subjected to some disease pressure actually may have have higher levels of antioxidants than conventionally grown. Heck, I’d rather eat a few worms than eat a systemic pesticide. And finally, I don’t mind putting in a little extra time and effort to avoid harsh chemicals.

I am definetly going to go heavy on the pawpaw’s and persimmons. This spring I planted several hundred pawpaw seeds on my parents land and hopefully will be able to get more next year for this land. I’m planning on planting some native persimmons along the woodline with a few hybrids in full sun locations. I have a lot of invasive barberry and bittersweet to pull out and will likely plant a gooseberry or something else edible for every invasive I remove.

I have over 50 American persimmon seedlings, courtesy of @Barkslip - way more than I know what to do with. You’re more than welcome to as many as you want, if that helps to get you started. I’ll probably keep 10-12 for grafting experiments and guerrilla planting, but you’re welcome to the rest of them.

The persimmon seeds come from an area of Beardstown, IL. and are very-very large (native) fruits with superb flavor!