We got some cranberries last fall that had spilled from a large truck that had an accident on the highway. I thought I would try planting some, since they would be a variety that should grow locally. They have been in the fridge since then. Would it be best to try plant them now in some starter mix on a heat pad, or just plant them directly in the ground in the spring? I wouldn’t need high germination, since I have a large amount. Has anyone tried this?

was thinking of planting some here as well. burnt ridge nursery has starts for $4. was think of growing some around my lingon and blueberries

Moose, where did you see the starts at Burnt Ridge? All I see are ones for $8.50 each.

A few years ago I took some store bought cranberries ,
Ran them though a blender , poured the pulp in a pot of peat out side in November , they sprouted in the spring .still there. No fruit yet.

Thanks, Hillbilly, I’ll try that then. I probably won’t bother with the blender. Will just mush them up some. I’ll try some now and more in the spring. I had planted three potted plants up in my orchard, and they grew slowly for a couple years, but they got logs piled on them and were dead when I discovered that. I also have a large bed of many varieties of lingonberries, but they seldom have any fruit. I think it is too dry where I have them. They have peat and acid soil, but lots of sand, too.

sorry it was the blueberry starts that were $4.

I ran them through the blender today, stirred them around in more water. The tiny seeds sink to the bottom. I now have about 1/4 cup of seeds spread on a cloth to dry. That would probably plant a couple hundred acres, but I only need a small patch. I think I will put the seeds in the fridge in a ziplock until I decide on what to do next.

Following with interest, as I’m thinking of putting in a bed of cranberries and lingonberries.

Do cranberries grown from seed take significantly longer to establish than transplants? I like the idea of starting my own from grocery store fruit, but if it will take a zillion years for them to fill in a bed and start fruiting, I might prefer to get a gallon-size plant and divide it.

burnt ridge nursery has them for $8.50. a few other places sell them too. i was considering growing them around my ligon / blueberry plants also. I’ve never had much luck growing berries from seed so i prefer starts. not very patient either.

How did this project work out? I have just recently acquired some seed myself.

I planted the cranberry seeds in cut-off milk jugs in peat on a heating pad. A couple got damping off, but three containers did well. Kept them under a grow light until spring. Set them out on deck over summer. Didn’t get around to planting them out, so set the containers among some leaves under a tree and protected them with wire over the winter. The following year in summer I prepared a bed by digging an area and filling it with two large bales of peat, some blood meal and some other powder, I forget what, that had been recommended. After it sat a while, on Aug 28 I planted the cranberriy plants, about 2 dozen plants. What I assume was gophers ate all the leaves. I put more wire around them and mulched the remaining stubs with straw over the winter. I’m hoping something might sprout from the roots, but not holding my breath. I trapped seven gophers from that area last summer, but there were plenty left. They also destroyed 50 asparagus plants in the same area.

i put in 2 starts last spring. didnt spread much but i got 1 cranberry. going to give them some miracid next spring to get them growing quicker.

For about 10 years I grew a 20x20 plot of Stevens cranberries. I planted the bed from starts from Raintree, spacing them 12" apart in slits in black plastic to avoid the hassle of weeding. At year 3, I removed the plastic, covered the sprawling stems with sand, and let the bed fill in. The canes started fruiting about then. By year 5 the bed was a solid carpet of 3" tall cranberry plants. Then I began to understand why farmers flood their cranberry bogs! Crawling around to pick individual berries hidden under the leaves(they do not ripen all at once) was labor intensive. I mused about rigging up some barrier I could flood, but never could figure out the logistics. By year 10, I removed the bed.
People often commented on the lovely look of the bed and I can confirm that they make a beautiful ground cover! Not sure if they are deer-proof, however.
“There’s no success like failure, and failure’s no success at all.” Bob Dylan

Crawling around to pick individual berries hidden under the leaves(they do not ripen all at once) was labor intensive.

I really appreciate your perspective. Good to know! I am not in a favorable area for cranberries but I do love them and keep thinking of ways I could get them to grow for me here. I have to remind myself to quit planting more work.

I’ve recently discovered (with the help of my father’s good eye) a wild cranberry patch in an untended area of my field. I look forward to trying to tend/propogate them in the future! 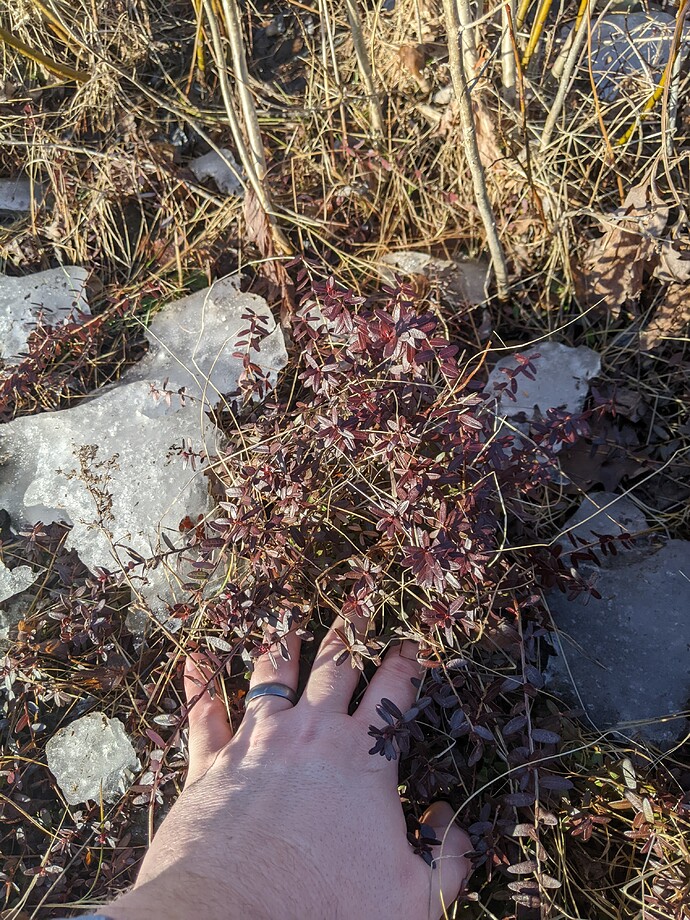 Pictured is the most dense part, but they are sparsly growing in the undergrowth of native rose, winter berry and willow in a 20x20 area.