Plum curculio have a weakness

Plum Curculio have a big weakness I was not aware of until today! It would seem when I bagged my plums some curc’s decided to crawl through the holes in the corners of those bags to ruin my crop! Some of those bags had accumulated water and they fell in and were still in there swimming when I came out to squash them. Many of you know already there are many more Curc’s than we see because they are nocturnal. I killed half a dozen or more today. This gives me an idea for a curc trap since we now know they will crawl in things and cant get out we can lure them into a water trap. I’m planning to use a plum tree I don’t care much about for bait and fill a small clear plastic cup with water about two-three inches deep with a hole cut in it with maybe a funnel into the cup. They can still see the fruit through the clear plastic which is the same reason they crawled in those bags. We could put a piece of another cup on top taped down with scotch tape so they can’t get out only in. If that trap was placed on a branch with a plum in it growing the curcs will crawl into their death again and again. Several bags had three curcs in them. Anyone else want to experiment with it?

What about a water bottle with the top three inches cut off and inverted back into itself? Do you think the crucs will just crawl in? Would you hang it in the tree or tie it to a branch?

We used to do that to 2-litter bottles and put a little bread and a worm or two and sink it in a pond. Come back the next day and you’ve got a bottle full of minows and cray fish to use as fishing bait!

That’s what I was thinking of city, but what would draw the crucs in?

seems like a worthwhile idea…as for bait, I’d think an unsprayed plum would be a great start. Any unsprayed plums at my place are magnets for PC.

Slit the bottle and have the plum inside would work excellent!

A 2 liter full of curcs would be a wonderful site. What I would give for some curc pheromone!

Warm,
PC seemed invincible all this time. I wonder if we could draw them in with a Christmas bulb or plastic fruit? Do the sticky traps work on curcs? I’m talking about the red ones you hang on the tree like they were an apple and paint with the sticky tanglefoot. I’ve never caught any curcs with those but I do use those traps at times. For those not familiar with the bag filling with water the curcs fall into this is what it looks like. The bags I dumped this morning had a bit more water and several PC mostly still alive. Their numbers are huge this year! 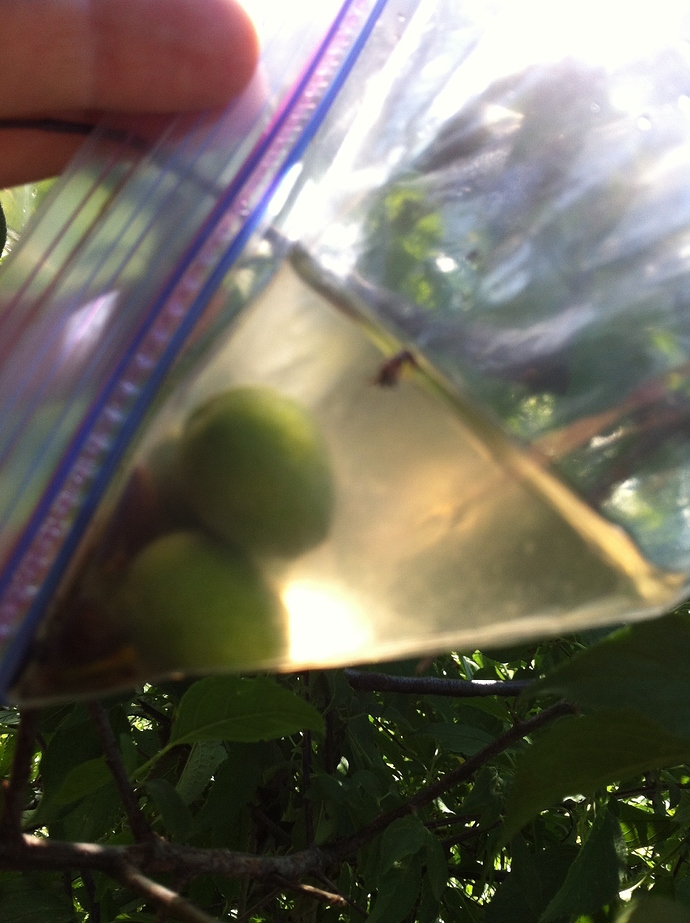 Curc numbers are huge here as well, and they are still damaging things now which is past their usual window.

The standard curc trap is such a kind of one-way entry thing, and you can get a lure to put in it. I have never actually set up my single trap, I’m always too busy in the spring and forget it. If there was a cheap version it would be great, put 100’s of them out and you could catch a lot of curcs!

I am debating on whether I am going to order some of the curc-eating nematodes, S. carpocapsae and S. feltiae. Now is the time to put them down, they will attack the larvae that are now dropping to the soil. I ordered some last year but through a snafu they never showed up.

you can get a lure to put in it

What is the lure?

Benzaldehyde, plum essence, and grandisoic acid are used as lures. The first is a common fruit smell, and the last is a pheromone. Lures are hard to find though. I think I bought mine from Great Lakes IPM.

Nematodes sound like a great plan. I know they would fly in from elsewhere but no larvae in my orchard would live. I’m ready to hit them with traps etc as well because they do a lot of damage the last two years. I’m no longer flying under the curcs radar.

A trap tree is a very good idea if you can wing it. An Alderman plum is perfect. Mine is a PC magnet. I swear that thing is like a beacon calling them in from all corners. I’ve kept the lower fruits clean, but i know up high there is fruit getting nailed hard.

I have a bunch of seedlings I’m growing out to top work so I have about 20 extra trees fruiting now that I won’t use.

A trap tree is a very good idea if you can wing it.

I have a couple russet apples that are proving to be trap trees - Kinnard Seedling and American Golden Russet. Many of the apples are riddled with curc bites. In between these two trees is GoldRush and it has little damage. Only these two russets are traps; they both russet up early so that may have something to do with it.

On the plums, Spring Satin is an extreme curc magnet. I’m not going to get many fruits at all this year from it.

Fortunately my curculio are finally dying. I found two lifeless ones this evening, and no recent bites.

I haven’t been able to find any curc damage in my backyard orchard. I guess I’m lucky. There are lots of wild plum about 1/4 mile away, so maybe with the Surround coverage, they decided to move on to (literally) greener pastures. No hits on even Superior plum or a peach that wouldn’t take much surround on the fruitlets.

I did however find that most of the fruit on a Sweet 16 apple and a Barlett pear were hit by curc. Those trees are about 20 miles away and I can’t get to them to spray very often at all (especially with the stringent requirements of Surround).

The studies using curc pheromone seem to have used boll weevil traps or some modification of such. The traps are available from Great Lakes IPM also.

I know many here use Surround for Plum Curc control. I don’t want to buy surround because I don’t like the white layer it leaves on the tree and fruit plus I only have 11 trees so I don’t have a use for big bags it usually come in. So I’m looking into alternatives.
What does everybody think about Spinosad and Pyrethrine to control PC? Any other product that you’ve found effective? Anybody used neem oil successfully for PC?