For the last couple years my cucumber plants have been under fungus pressure including
Anthracnose, I read that some of these funguses live in the soil and come back year after year, is there anything I could mix in with my existing raised bed garden soil to help sterilize the soil to minimize risk of funguses?

there are some fumigation pesticides that kill soil diseases. They often kill a lot of beneficial things thought.

Usually you solve this problem by moving to a new spot. with soil where cucumbers or the curcubita family has not been grown for a while.

Or you could graft them to rootstock plants that are more disease resistant. Grafting is quite common practice for cucumbers.

It’s on my “to do list” to try out. But i have no experience with it as of yet.
I think they use squash or Cucurbita ficifolia as rootstock.

Are you sure it’s anthracnose and not bacterial wilt from cucumber beetles?

I think it is supposed to help to cover the bed with a black tarp, during the heat of summer… for a period of time.

found this on Google… its called soil solarization…

1). The sun heats the soil to temperatures that kill bacteria, fungi, insects, nematodes, mites, weeds, and weed seeds. … Don’t use white or black plastic; they don’t allow enough heat to get to the soil. Bury the plastic edges in the soil to trap the heat.

Can I use black plastic to Solarize soil?

In general, transparent or clear plastic is most effective for solarization, as the heating rays from the sun will pass through the sheet and be trapped to heat the soil below. Usually black plastic is less effective because it absorbs and deflects part of the heat, rather than trapping as clear plastic does. 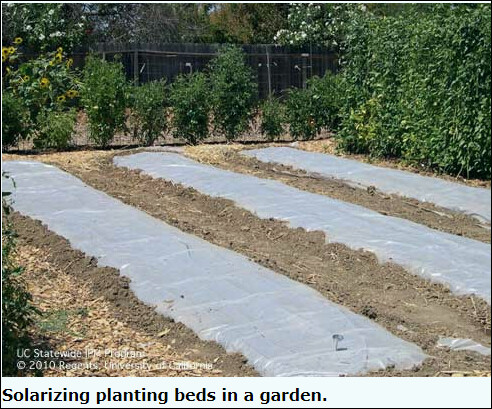 Solarization controls many important soilborne fungal and bacterial plant pathogens, including those that cause Verticillium wilt, Fusarium wilt, Phytophthora root rot, Southern blight, damping-off, crown gall disease, tomato canker, potato scab, and many others. A few heat-tolerant fungi and bacteria, such as those causing melon decline and charcoal rot of many crops, are more difficult to control with solarization.

The method involves heating the soil by covering it with clear plastic for four to six weeks during a hot period of the year and when the soil will receive the most direct sunlight.

Yes I’m sure, with repeated applications of fungicide it quickly went away. I was hoping they were some amendments that I could add to the soil to help fight funguses That plastic tub looks interesting will the plastic heat up the soil too much that it’ll burn the roots of my vegetables?

I’ve read you can graft tomatoes onto potatoes rootstock. Both suffer and subpart vegetables are produced but the novelty of it is amusing.

Yea, they even have special soil disease resistant tomato varieties for rootstocks. So you can grow tomato’s in the same soil in a greenhouse.

I’m in a climate where melon’s don’t grow/ripen that well. I want to try out some hardier rootstocks and a smal 2 foot greenhouse tunnel. To see if that speeds them along. And hopefully gets them growing when the soil is still a little chilly for their liking.

there also seem to be some cucumber varieties with resistance you can also try those.
https://portal.ct.gov/-/media/CAES/DOCUMENTS/Publications/Fact_Sheets/Plant_Pathology_and_Ecology/ANTHRACNOSEOFCUCUMBER013014pdf.pdf?

That plastic tub looks interesting will the plastic heat up the soil too much that it’ll burn the roots of my vegetables?

with solarization your treat the soil before you plant your vegetables. And thus during the hottest part of summer you can not use that area for other plants.

it basically cooks the soil. Killing most of the disease organisms. But also the roots/plants and beneficial organisms. It’s close to sterilizing soil.

Ok, thank you Oscar for the help

The soil for commercial strawberry production was historically fumigated with methyl bromide. Over the last few years this has been phased out, and there are lots of other reasons you don’t want to do it, but it might be worth looking at some of the suggested modern alternatives. Here’s a page with some suggestions that might be worth looking into: https://www2.ipm.ucanr.edu/agriculture/strawberry/Non-Fumigant-Alternatives-for-Soil-Disinfestation/