This is a new one to me… is this Xylella fastidiosa which we call Persimmon Sudden Death Syndrome? It looks a lot like Verticillium wilt. Strange?!

Only on this years growth. Has nothing to do with any contact of any kind against the stake being an example. Leaves & petioles are completely unaffected. If it’s appearing on any other Chuchupaka grafts, I haven’t seen it yet, and should I find it anywhere else in my nursery, I’ll certainly bring it to attention. Thanks 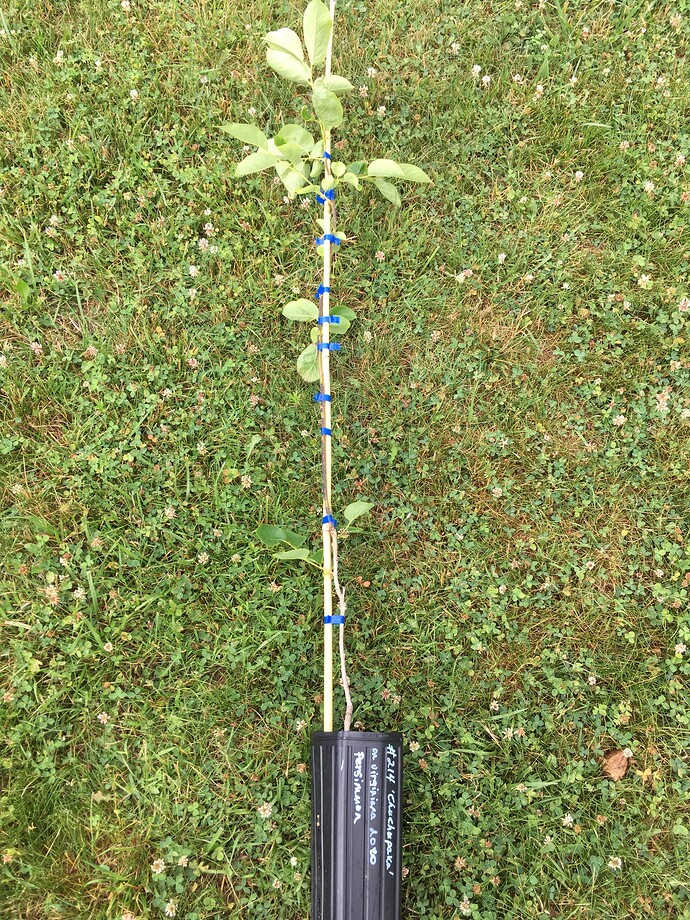 Running the entire length of this years growth 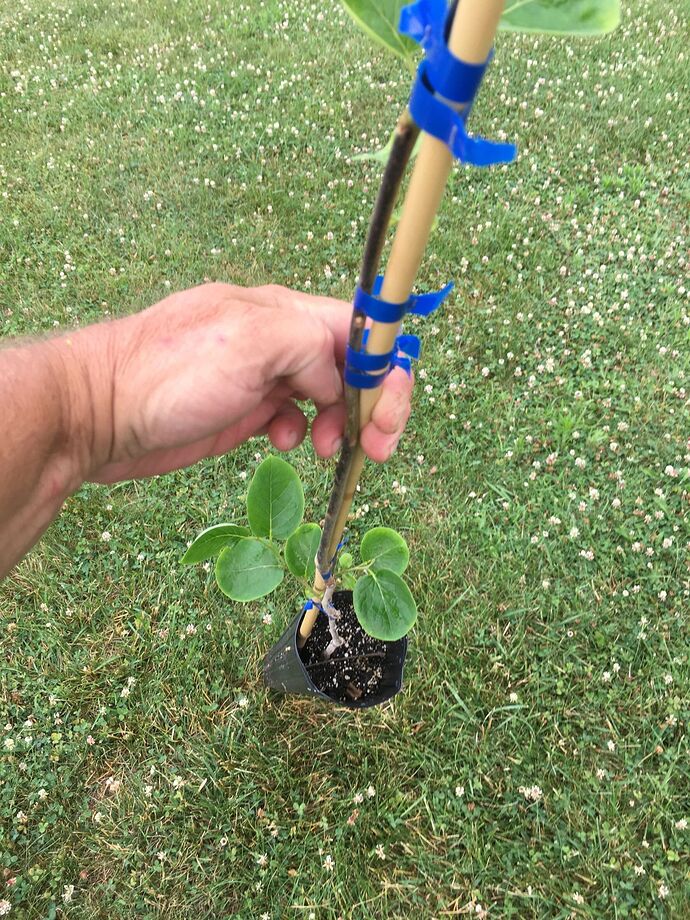 Somewhere towards the middle. That straight line is ‘like’ Verticillium. 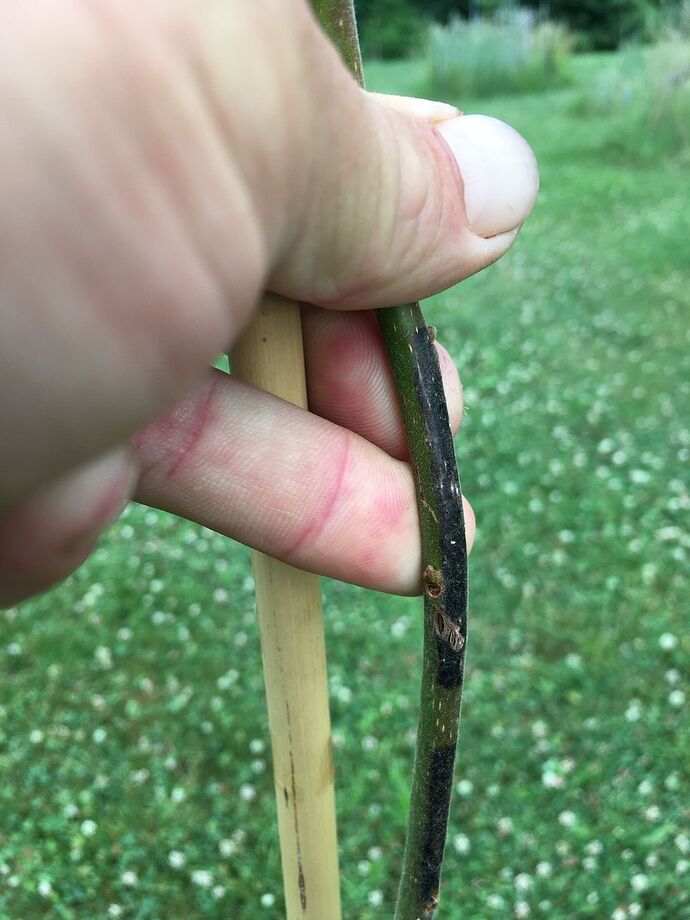 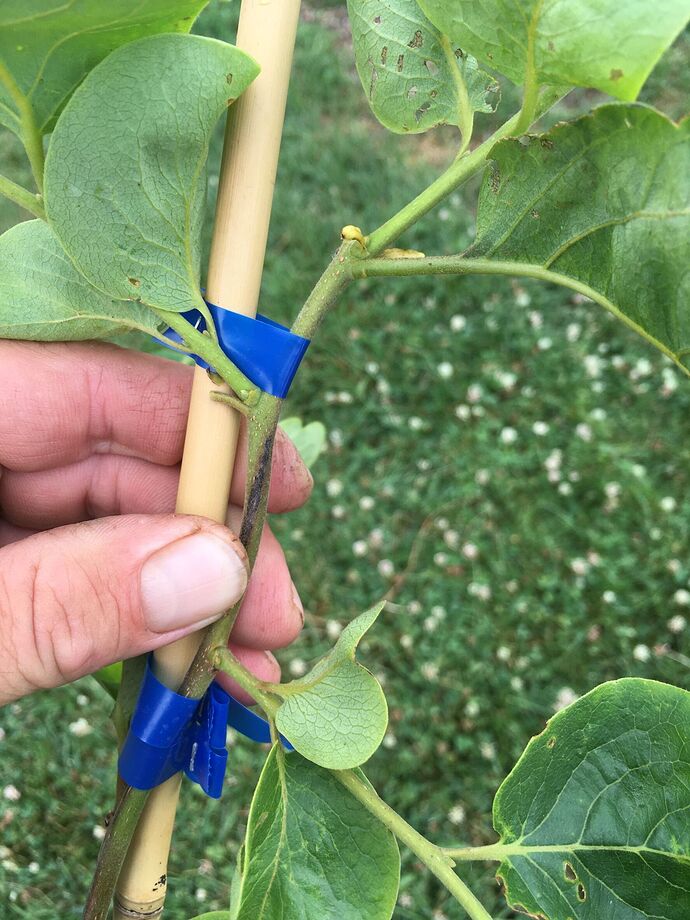 Yikes. Does it look different than the dark that smaller DV rootstocks can sometimes have? Is it just on one side oriented toward the sun or something? I guess it wraps around. Just spit balling.

It’s that same type of black as on younger seedlings. I know what you’re talking of.

There are lesions opposite side too on the top that might be 2 cm in length but are NOT straight lines. They’re shaped irregularly with rounded edges.

I should have said this black is facing the sun but East. This was the last tree in a row as I’m going thru and tying new-growth to stakes.

So I thought to myself, I wonder what facing sunlight would have to do with it ‘even’?

Looks kind of like sun scald to me. Especially that second to last picture, where it looks like you removed a band of tape and there isn’t any of the same issue in that area.

I think similar. Thanks for your input, Steven.

Does anyone know this disease of my persimmon, .it seems to curl leaves, I cannot see obvious insects, but something is causing severe curling 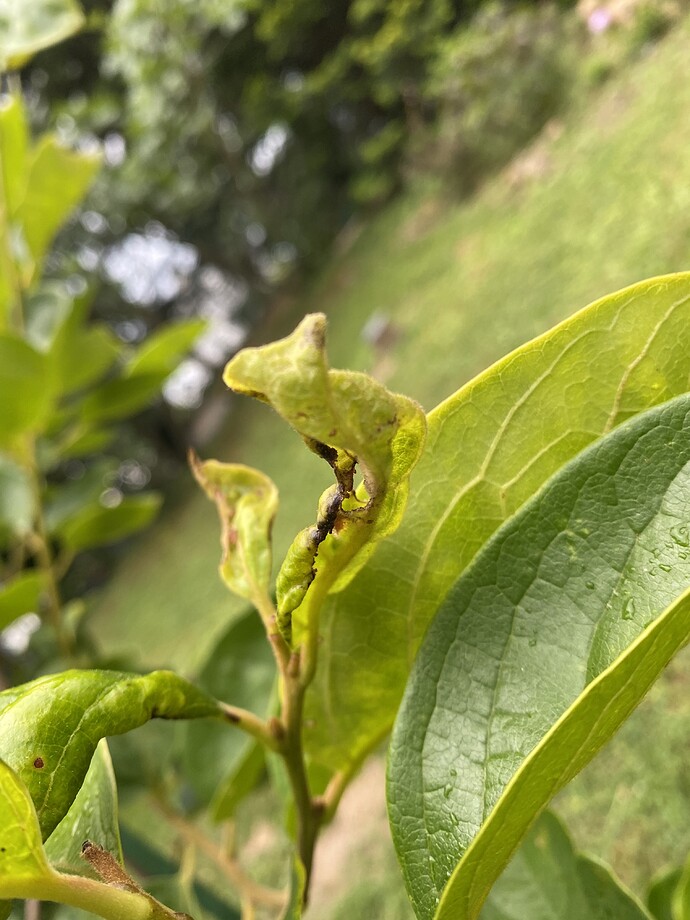 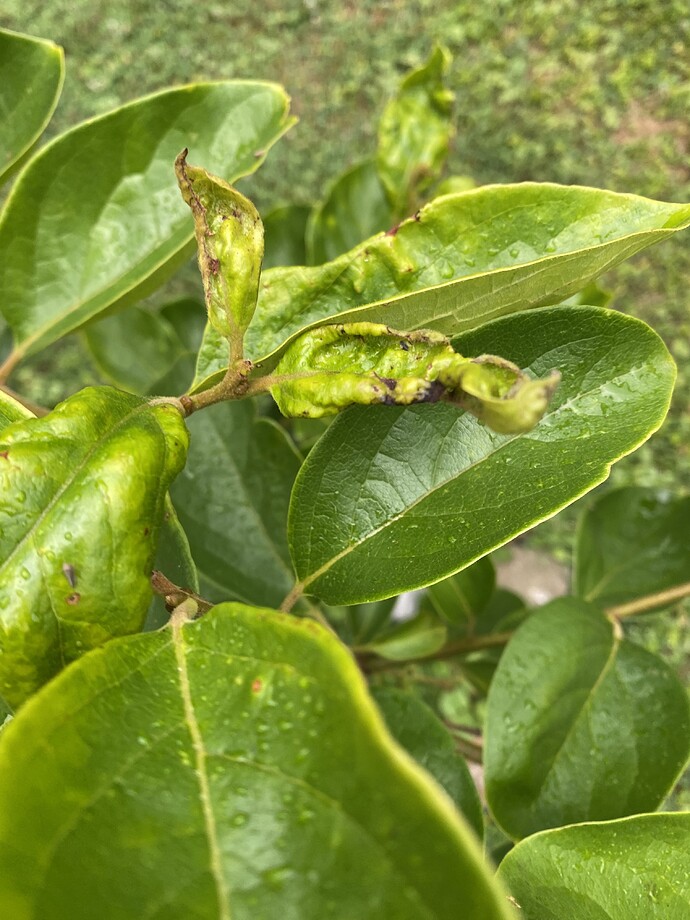 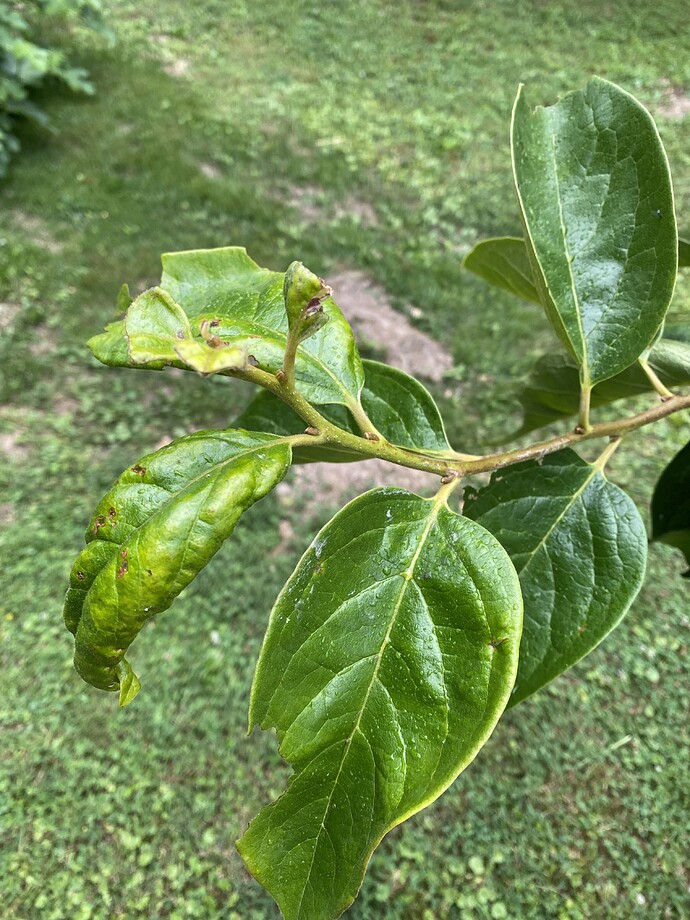 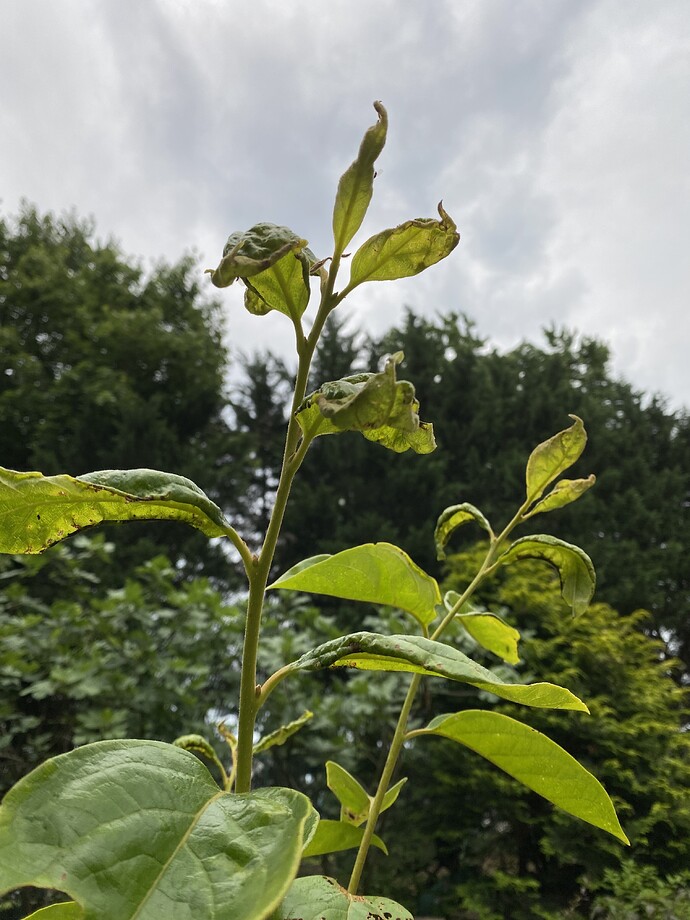 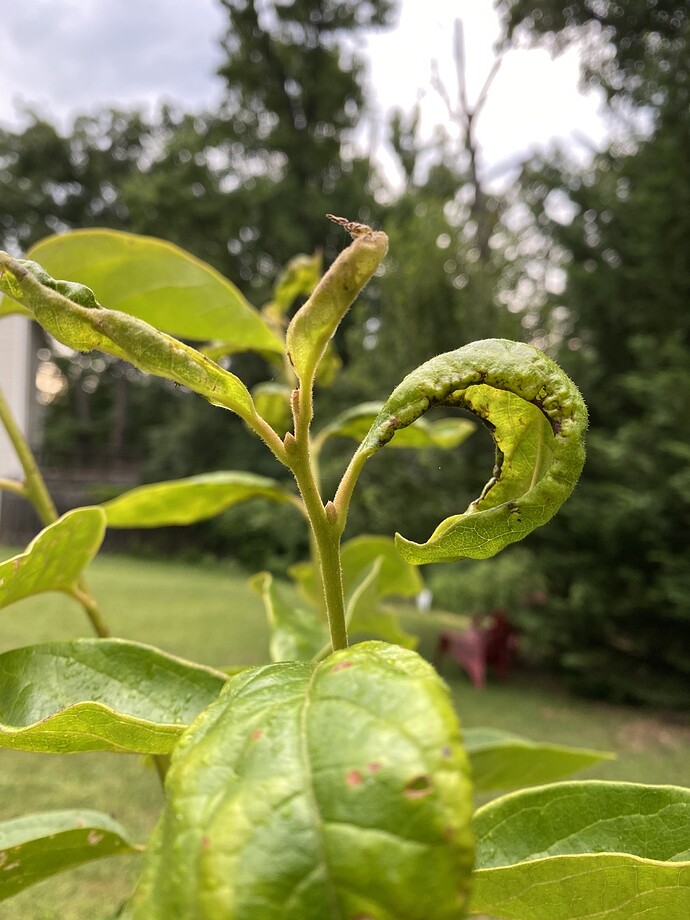 Calcium deficiency could cause young leaves to look like that, too.

I have been reading up on nutrient deficiency on plants until my eyes crossed these days.

That’s the kind of commitment I like with horticulture! ha-ha. Good job, Tippy!..

It’s not sudden death… Everything fades and dies without visible lesions, without anyone understanding. Suddenly, step by step. It’s not just one area that’s affected.
It looks like a wound that’s not going to kill him.

Dax, Just my opinion, but if I have 1 plant out of several hundred that shows signs like that, I cull the plant. There are too many plant viruses that can cause similar symptoms. That said, It might be worth cutting the plant off below the damage to see if healthy new growth would show.

Should also mention, the bark damage shown is typical of an incompatible graft. Do you know the rootstock and scion?

Darrel, just my question to you which is does ploidy or can ploidy to this? I have a mix of southern and northern diospyros and I have been wondering now from all the “deaths” to persimmons that I’ve mostly heard people tell to me that they’re persimmon isn’t cold hardy because it’s southern roots.

A lot of these folks are having trees die (during winter) but they’re in zones 6 (up to 6b) and had their persimmons perish at temperature such as -9. I planted a mix of these southern and northern and had a light winter and lost a whole bunch of them and the ones still growing I (assume) are on Northern.

This is a long winded question about ploidy. I keep considering that a mis-match from all the hybrids being half northern and half kaki (= same chromosome) and then you put/graft either hybrids or all northern cultivars onto southern and… if southern is the reason they’re crashing?

I don’t know the answer Dax, however, mixed ploidy levels are often implicated in graft failure. I’ve had serious difficulty getting a pecan graft to take on a mockernut hickory. While others have said it can be done, I interpret lack of success to indicate 64 chromosome mockernut does not like 32 chromosome pecan.

Cold tolerance is a different can of worms. (worms are great if you are fishing, not so much otherwise) In general, perennial trees grown in northern climates should be grafted on rootstocks that originated in similar climates. I would avoid southern rootstocks for persimmon given where most of yours will be grown.

Another Chuchupaka…
I found it a few days ago and am posting now.

@kakasamo – I had some of that on my persimmon seedlings a while back.
The edges of the leaves just curled up and got gnarly like that…

I rolled one of those curled up leaves out and there were little critters under there.
They were white, and I brushed them all out with a tooth brush, and gave them a shot of Seven.
Took care of them… New leaves that have come out since then are good.

Here is what my leaves looked like… and the critter that barkslip mentioned. 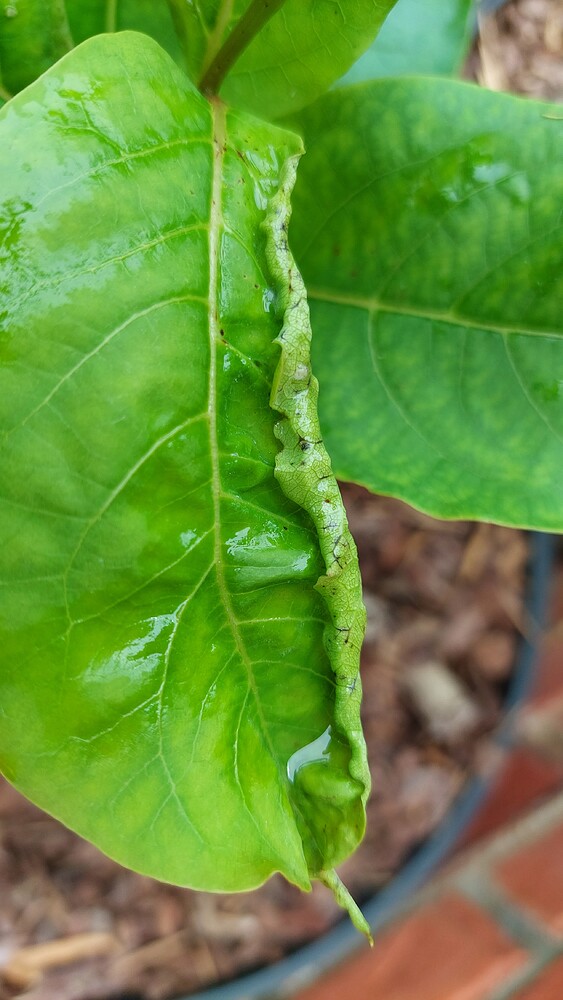 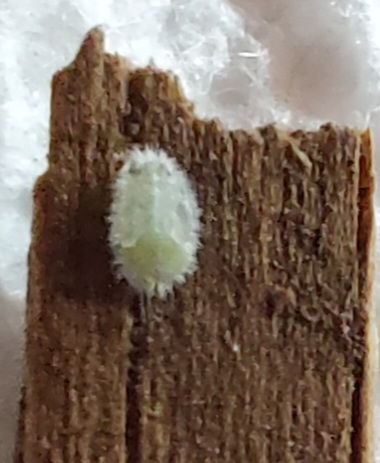 PS… I did not see them either, until I forced one of those leaf edges to unroll… they were hiding inside there and not really visible from the outside.

They are often called leaf curl mites. There is a related group called scorch mites. It is difficult to kill them as they are hidden in the leaf curl.