I have a seedling Apple that is about three years old. It grew a thick trunk, 2 inches at the base, but branched out at 12 inches high and never really grew vertical much. I cut off the three main vertical leaders this spring an grafted on Fuji. Two grafts took. Now I wonder what to do to begin to shape my tree. Should I wait until winter and prune back to the best leader ? Each graft had two or three buds and all are growing, should I prune down to one per graft now? They have about 8 inches of growth on them. 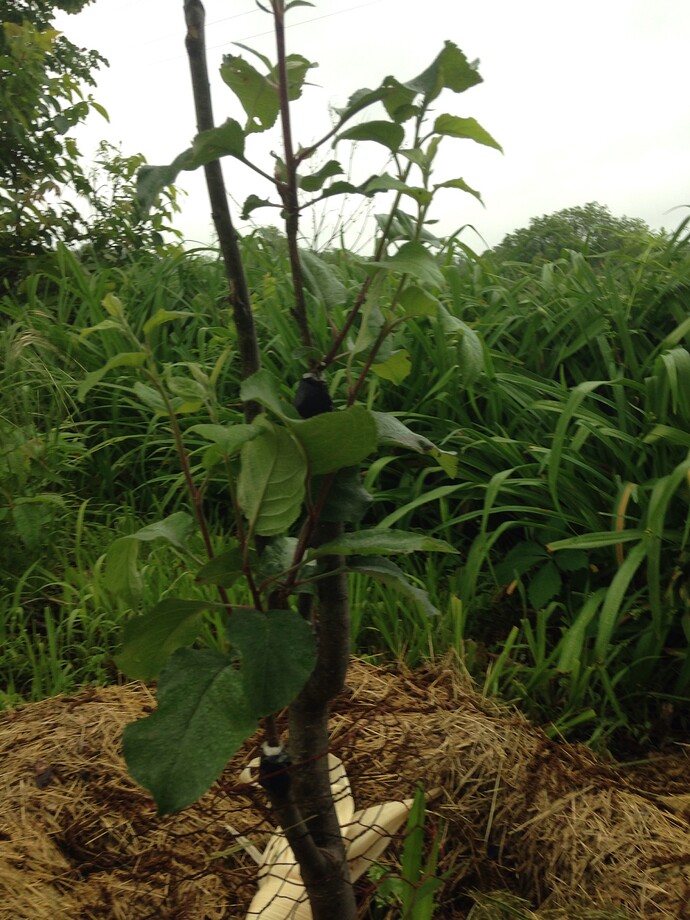 You have a lot of options, but I’d probably choose the strongest and straightest as my new central leader and cut everything else away without waiting until dormancy. Let the tree put its “flush” into your main guy instead or squandering it on wannabes.

You can always train it to a vase once it’s high enough to suit you, or keep it as a central leader.

Looks like you’ve got a nice, healthy start. Good work!

The wannabes may be actually helping your permanent leader at this point. The root system is more than adequate to give all what they need and in return the leaves of each graft is feeding the roots. You can cut out any wood from the temp branches that grab light from your chosen leader and otherwise keep as much leafing wood on the tree as possible.

I don’t generally believe that branches compete for root nutrients- water and N in particular, they compete with each other for sun and vegetative shoots serve the roots very well.

You may have a seedling of value if all it wants to do is put out horizontal growth. Sounds interesting if I understand your description.

Thanks for the tip Alan , yes it is different from the other seedlings that I grew. The trunk is much larger , I never pruned it and it grew three central leaders that only got about four feet high . It sent out a large scaffold about 24 inches high on the trunk and three feet long. Most of the growth went into this part of the tree. I pruned all of that off when I grafted on the Fuji. From what I have read Fuji will try to grow large and be slow to fruit so it will be interesting to see what it does on this seedling.

Alan, thanks for that observation. I’ll admit to being uncertain about the when of removing foliage to remove competition vs. leaving it to provide growth. Care to comment further?

marknmt, there are a lot of variables on that and I can’t say I’m completely clear myself, but where competition can beccome a problem beyond shading is when too much of the vascular system is serving the unwanted competition because it is of larger diameter than the branch you are planning to keep.

Generally the quickest way to bring a tree to size and productivity is by pruning as little as possible and a common production strategy for free standing apples is to only prune out excessively thick branches and leaving everything else until the tree begins to fruit.

Yet peaches are usually reduced to permanent scaffolds from the first season with the explanation that all the energy is being directed to the branches you want to keep. I don’t prune peaches this way, but that is partially because I train them to have 4’ between the ground and first scaffolds so I can set up squirrel and coon baffles and train them above deer. Nevertheless this is a proven method for commercial growers to get peaches to bearing size the quickest way possible.

So it depends on the situation, the species and the ultimate shape, I guess. In the case of this small apple tree the root system was already established and a lot branches that fed that root system were already removed, so I’m guessing you want to keep that root system adequately nourished for quickest establishment.

Thanks, Alan. That’s very useful and I appreciate it.

I watched my little graft growing, would it take, is it possible I got it right this time? Yes! It’s growing , do I choose one graft , do I prune the other back ? I consult the experts , get great advice. While I was at the lake this weekend a deer ate nearly all of the leaves and the tips off of both grafts 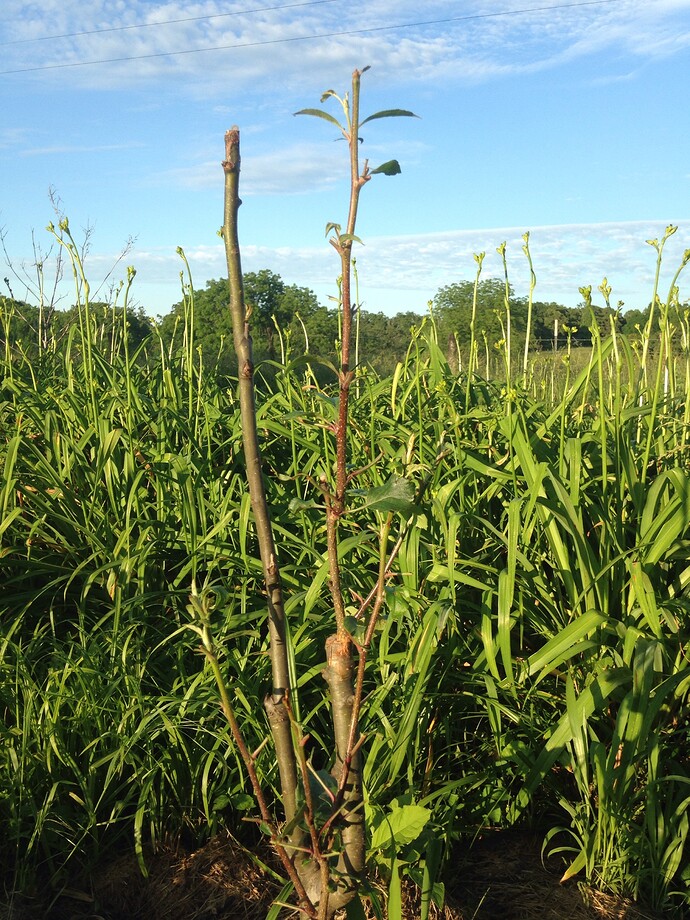 Well, just my thoughts here and I stand ready to take correction, but in my mind, “a house divided cannot thrive”. In other words, let one or the other rule, but don’t make a pair of competitors.

Your tree is not set up to be a vase- it’s two vertical leaders competing. In a vase three or four separate, non-vertical branches set off in their separate ways. But with a pair of vertical leaders they will fight for light and air and neither will be the better for it.

It’s hard to do but I would remove the one on the left, even though it is straighter, and keep the one on the right, unless the left one proves itself in the next few days. The two little guys to the front should also go, in my mind.

BUT- re-reading what Alan says above, you may do well to keep the little guys for a while, and I hope he offers comments on just when (and whether!)

Alan- Would love to hear/see what your squirrel baffle looks like, material.

Hambone, I will try to take a photo. Baffles start going up as soon as I can get a day of spraying done (probably tomorrow).

It is just a mater of stapling a cylinder of aluminum flashing around about 3’ of trunk starting at least a foot above ground level. Then I paint on a mix of 70% motor oil to 30% axle grease to make them real slick.

That’s great information. Do you staple directly to the tree? Just a regular staple gun?

Yes, half inch staples or more with an Arrow staple gun. I put them up by about mid-June and take them down again as soon as harvest is in or next time I’m at a site after that. It can be damaging to leave them on over winter- mainly with young trees.

Does your oil/grease coating stay on from year to year? I take it the aluminum by itself is not slippery enough?

No, it may even need reapplication during the same season, but it lasts much better than straight motor oil and straight axle grease actually provides traction on a cool night, apparently.

The aluminum may work by itself- depends on the squirrels mood (or level of hunger).

Great information! Thanks Alan. Unfortunately I chose Geneva 30 as rootstock so after I limb up enough for squirrels and deer my trees are almost guaranteed to try to keel over under load at about age six. So am installing hefty eight foot T posts to try to keep them upright. I was so fixed on finding a blight resistant rootstock and did not learn about the G 30 instability until it was too late. Oh well, if I live long enough I’ll figure all this out…

You could acquire adequate stability with a single piece of metal conduit driven into the ground right next to the trunk- G30 isn’t all that instable in my experience with it. Its problem is incompatibility with certain varieties that cause it to snap off at the union after several years. Happened to me with Kidd’s Orange Red, but another on the same rootstock 20’ away thrives after about 15 years.

Alan- How far from trunk would you put the conduit? Don’t want trunk to rub on the metal in future. I have three G30’s that started leaning badly at about age six, had to brace them up even before much of a crop load.

I make it pretty snug so that squirrels can’t squeeze through the inside. They are rodents.