I know that pruning help threads can be annoying to the experts. And I apologize in advance. But I don’t have any local help to turn to and I would hate to do something stupid that would set my trees back another couple years from bearing. So I would like to get your feedback.

Attached is a picture of a Spice Zee Nectaplum on Lovell rootstock that I planted last year. The tree grew like a champ last year and put on a lot of new growth. I probably should’ve thinned some of the new growth back in the summer but I left it alone. At this point the tips of that new growth are about 9 feet tall. I don’t mind if this tree is a little larger than my others as it’s planted with plenty of space around it. I expect it to be a gorgeous spring bloomer in a few years and the fruit will just be a welcome bonus. I suspect a nectaplum should be pruned open center like a peach tree. You can see where the tree was topped at the nursery so I think the form should be okay. What I think I should do is cut back those long shoots near the top to outward facing buds and also remove several of the scaffold branches that are lower on the truck. Is this advisable? Should I I also cut the tips off the remaining lower scaffolds to outward facing buds as well?

Any help or comments would be greatly appreciated. Thanks. 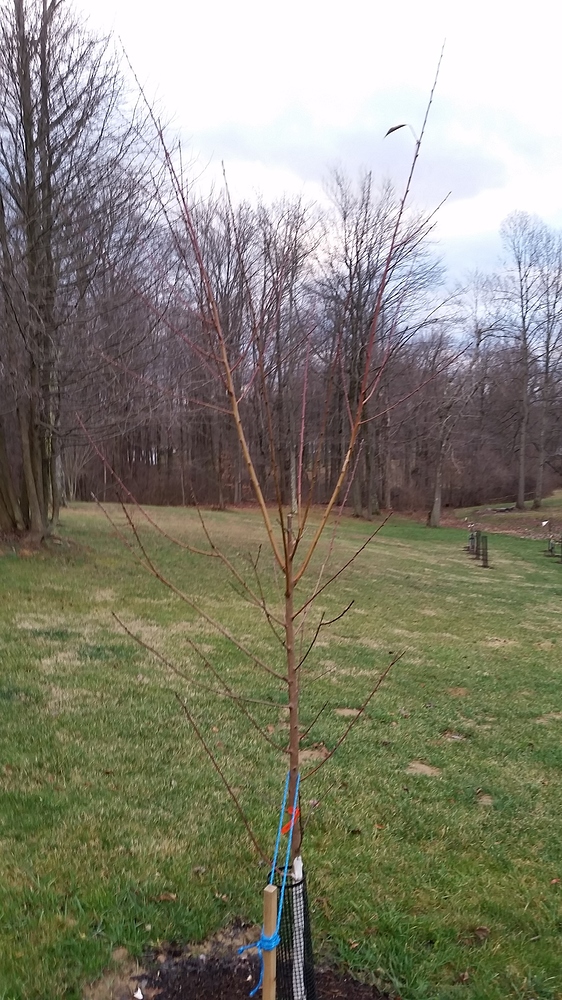 For open vase you only want 3-4 of those branches not the 15-20 you have now. Chose the height you want for origination of branches. Cut back above the highest branch. Then leave 2-3 more branches below that which all point in a different direction. It’s best that all branches originate not too close together.

You could chose the strong 3 near the top if that’s not too tall. Otherwise cut down to the height you want. If there are flower buds on biggest shoots cutting the tree down might cost a few fruit this yr. But by next yr the tree will be about the same size cut down or not.

Alan maintains a central leader like you have a few yrs and then does as suggested to form an open vase. I haven’t tried that. But if you want a low open vase I’d do that now. Those lower branches will shade out at some point and you won’t be able to go lower.

I’d also shorten lower branches if you shorten and keep those.

The upper strongest branches if saved for open vase need training to a lower angle or pruned as you suggest to lower angle. 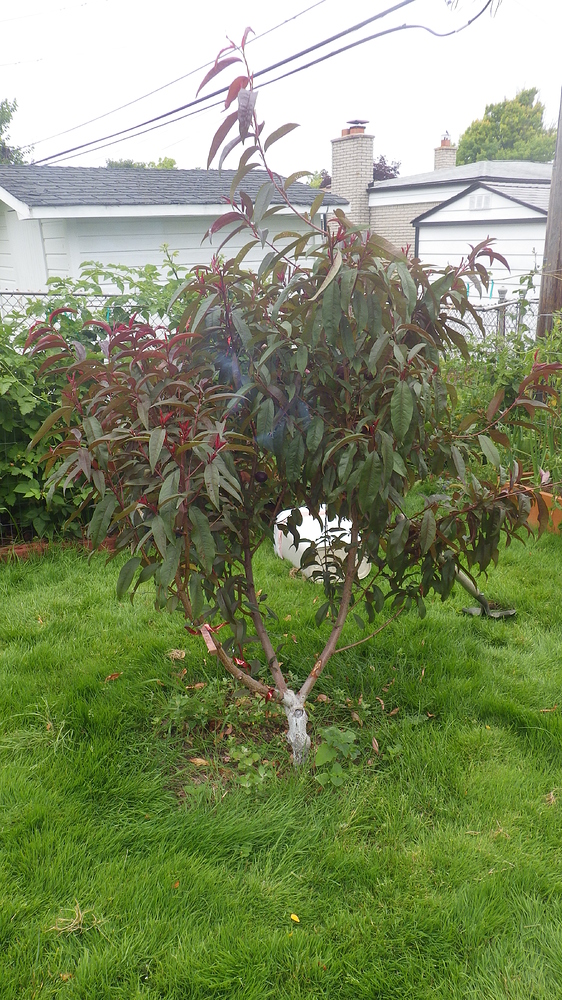 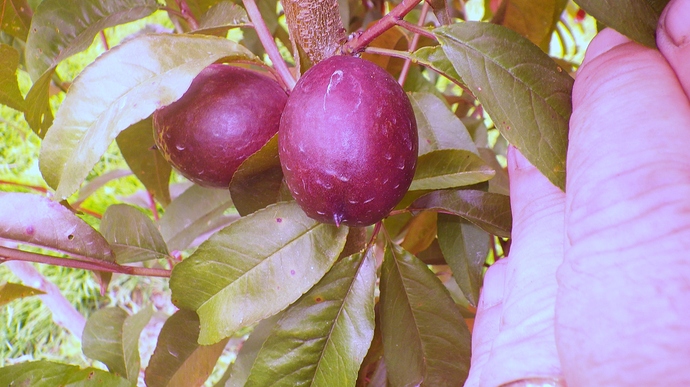 Thanks for your help @fruitnut. I certainly have a lot of branches originating from the trunk. Some of the hardest parts of pruning for me to grasp is when it comes to summer thinning cuts versus dormant heading cuts. It sounds like dormant pruning cuts stimulate a lot of new growth. So it makes sense to me to shorten the branches that I leave in order to create new growth on those remaining branches. But this seems counter intuitive to me removing a large portion of those potential scaffold branches during dormant season. If I cut 10-15 of those smaller branches off in order to get down to the 3-4 recommended branches aren’t I going to create a flush of new growth on the truck? I guess I over think things but it seems to me like I should wait until summer to remove most of the limbs so that it doesn’t encourage new regrowth. And cut the limbs I want to keep back to an outward facing bud here in the next month or so to force it to spread out.

Or should I just make all my cuts during dormant season and rub off any buds that I don’t want growing once they pop?

I don’t think the height of the tree will be a big problem. I don’t care if it grows 10-12 feet high. So saving one or two of those thicker limbs up top might not be a bad idea as long as I head it back to outward buds and reduce the angle they are growing.

On a side note, it appears I will have some scion wood available from this tree if anyone needs Nectaplum.

I would top off that tree a couple or so branches above where that blue rope is tied to the tree. You’d then have a balanced tree, BYOC style, easy to maintain and harvest.

Unless you have deer/rodent issues, in which case, I’ll top it higher and remove lower branches, leaving 4-6 scaffolds.

I myself would not keep the thicker branches, all that should be removed and make an open centered tree. And I would do it now, as you want the scaffolds to develop, so yes stimulate grow. And as far as rubbing buds off, how do you know you’re not rubbing fruit buds off? Any other growth not wanted can easily be removed in the summer. If you leave the top branches it will be more of a central leader tree, and those lower branches will be shaded out and could die. If any are directly below those. Pruning for central leader is a lot different. I have never seen a peach grown with a central leader, so it would be different.
My Nadia Cherry-plum hybrid kind of looks like this tree and I’m cutting off the central leader this winter. About 3 inches above where the blue rope is on yours.
Dave Wilson Nursery says prune for structure in the winter, prune for height in the summer.
I agree with fruitnut that the upper thicker branches have too narrow an angle to be scaffolds without weighing them down. I would just remove them. They may be too stiff to lower at this point.

I would top off that tree a couple or so branches above where that blue rope is tied to the tree.

That’s what I’d do also. I was trying to give options above. Sometimes beginners don’t need options.

Thanks Guys. Drew I miss-spoke about rubbing buds off. What I meant to say was rub off any new developing growth on the lower part of the trunk.

I definately planned to grow this as an open vase type tree. I thought maybe it would be better to have the vase a little higher up the trunk.

So in addition to cutting down the central leader to near the blue rope do you advocate cutting the scaffold back a little to outward facing buds to encourage fuller growth on the scaffolds?

And get rid of the stake.

Not sure if you can tell in the picture but that stake is location nearly 2 feet from the tree and was added because the tree was leaning a little. It’s meant to be temporary. .

I thought maybe it would be better to have the vase a little higher up the trunk.

Well yes you could, we just don’t like those branches. If they had a better angle. And you could work them down, it’s not impossible! So yes it is an option.

So in addition to cutting down the central leader to near the blue rope do you advocate cutting the scaffold back a little to outward facing buds to encourage fuller growth on the scaffolds?

Yes! Every year cut up to 1/3 of last year’s growth. In the winter.
Where to cut off:
Well near the blue rope. Look and if you have 3-5 branches that point in different directions and are not at the same level on the tree trunk, there are your scaffolds. probably by the end of next year, those puppies will be really thick! It’s amazing how much they grow. Go up higher if you need to. I think as high as 4 feet is OK. 4 scaffolds is probably ideal although you can leave more. You don’t have to decide on all of them, you can narrow it down to 7 or 8 if you want to see what grows better. I don’t think having more than 5 is good in the end. They will side branch out and stuff and fill the area fast. You can have secondary scaffolds on your main scaffolds. By trimming branches in bud direction, you can point tree to open spots in the canopy.

Generally, they end up making the tree dependent on it. If you top off the tree and remove all the weight, you may not need a stake at all. That’s another benefit of the open vase system.

If the tree is still not straight enough to your liking, leave the stake but not more than a year in ground. The tree needs to rock in the wind a bit to learn to anchor itself.

That’s what I love about this forum. You guys really helped me and gave me some great advice and explained the reasoning behind your suggestions. I really appreciate that.

I will take all of your advice and top the tree near the blue rope, choose 4-5 good scaffolds in multiple orientations, and remove a little of last year’s growth from the remaining scaffolds.

I will also remove the stake which I planned to do as well. Did not realize it will leave the tree weak if left on.