Raspberries that my wife planted last year (2020) are, in my opinion, growing out of control. The stalks/vines are 12 feet long and my wife just lets them crawl across the ground. I lifted them out of the way and draped them over a nearby fence but I like my fruit plants to grow ‘military style’ (standing straight and in an orderly fashion). My wife says that we have to let them grow and she will not let me prune them. IF I DO PRUNE THEM (when she is not home), how should raspberries be pruned? She also get very angry when I want to prune our 10 cherry trees. This has been an ongoing battle between us. My wife says that, in Russia (Ukraine), you never prune your cherry trees. I say that all fruit trees, like people, have to feel the sun on their faces and I tell her that we should trim suckers, horizontal branches, crossed branches…you get the gist. I would appreciate anyone’s feedback on pruning raspberries

I also like my trees military style. I hate all over the trees and bushes. I’m no expert on pruning though. I prune my raspberries in the spring. I take out all the dead branches and shorten the previous year canes. It works with the variety I have. I think how you prune them depends on the variety. Look up a YouTube video on pruning raspberries and get to work! Trees like kids need to be trained.

Apparently you have a lot of spare space that 12-foot horizontal raspberry canes do not get in the way. I would let them go and entertain yourself by watching her harvest them in a stooping or kneeling position.

12-foot canes are too tall to train vertically but they do bend and can be trained by bending to keep them reachable, about 7 feet above ground peak height.

If your Raspberries or Blackberries are the more Erect Type, rather stiff cane, upright growth habit, then I think the “V” type trellising system shown by the guy from Univ of Main below is the best way to trellis them. 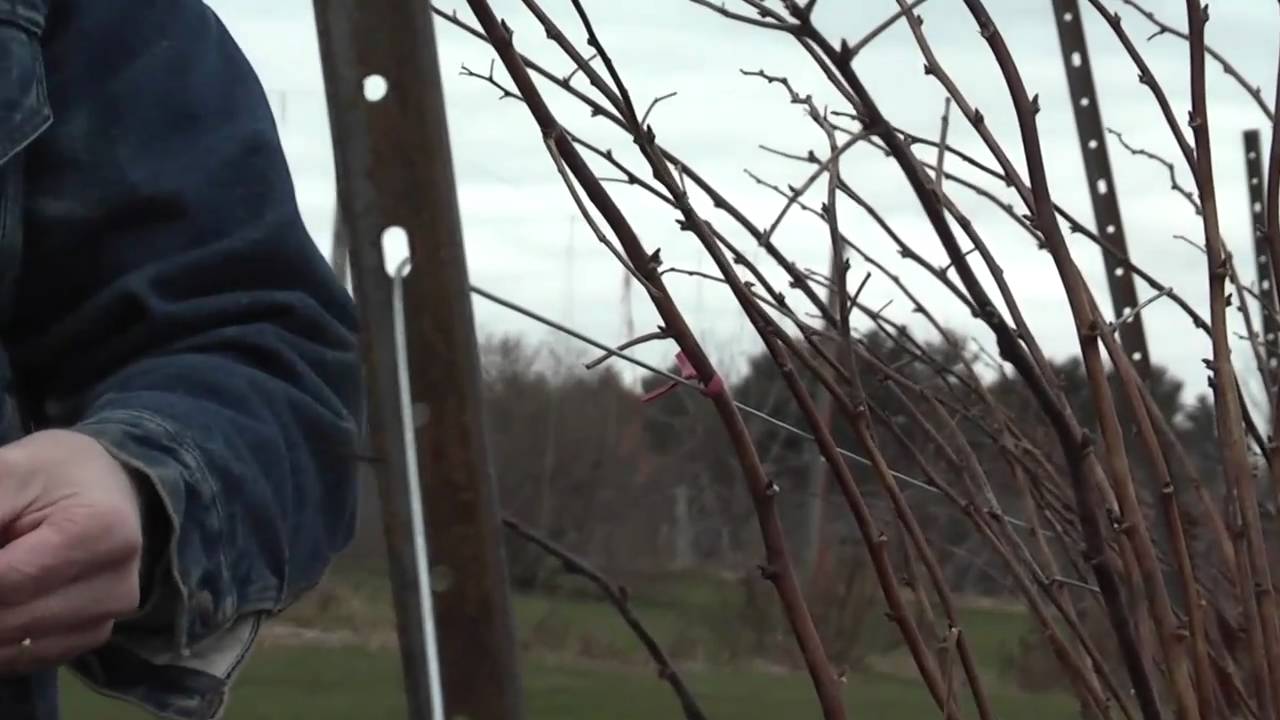 My Red and Gold raspberries are quite erect (Heritage and Fall Gold) and I propagated so many this spring, especially the Reds… that I started 4 more patches of raspberries… one 35 ft long… Some of the other new beds were smaller patches (6-8 ft long)… but I did them all like the guy from Main shows - that “V” type trellis.

I have some black raspberries too, one that I don’t know for sure the variety (got a black when I ordered a gold)… and a few other Ohio Treasure Blacks… and I have them in the “V” type trellis system too. They are not nearly as erect… but they are working fine in that V system.

If you watch that video all the way to the end where he shows the results… it is quite awesome… I was impressed. I could see that is going to work well.

While your older floricanes are fruiting (on the outside of that V) … the new primocanes have plenty of room to grow up in the middle, and get all the sunshine they need to grow strong and healthy for next years crop.

If you happen to have a Trailing type Raspberry or Blackberry… a different trellis system may be needed.

I have a Loganberry and it is a very vigorous grower… canes easily reach 12 ft and more…
I have it on a different type trellis, basically a flat panel type of trellis system, with multiple horizontal rods that you can tie the canes too. Two crowns and a 8’ x 12’ flat panel trellis system and it covers that completely, and runs off the ends. I have to keep pruning the excess off (and tip root some).

The V type trellis would not work for Logans, or I doubt for any of the true “Trailing” type berry canes that grow very long.

The trend today seems to be to more Erect, Thornless berry canes…

The video below shows Dr. Arlie Powell demonstrating how to trellis blackberries (Trailing blackberries). That type of system would work Ok for my Logans. Mine is somewhat similar to that but where he only has two horizontal wires for the canes to grow on… I have 5 and my logan eats up all that space and more. 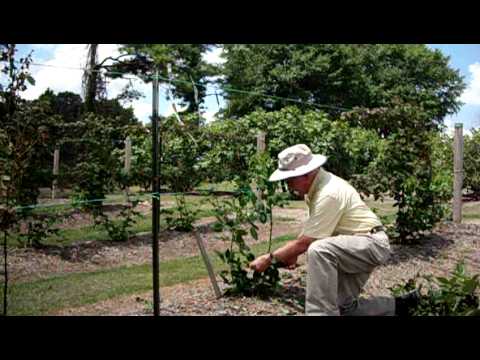 I think the Positives that you could encourage your wife with… to make her feel better about keeping them trellised, and up off the ground… would be… easier picking, healthier plants, less pest, easier weeding, easier pruning.

[quote="Bill,
“Raspberries that my wife planted”
[/quote]
“she will not let me prune them. IF I DO PRUNE THEM (when she is not home), how should raspberries be pruned? She also get very angry when…”

Humm…
?
In the spirit of preserving marital bliss , I would not prune these plants !
Maybe get “ your own “ raspberry plants .plant them in a separate area, with the understanding from day one that you want to experiment with different pruning , training methods on this
“ your “ raspberry patch . Study raspberry pruning . Make yours the showcase patch. After several years she will beg you to prune “ her “ patch like yours .
That would be my advice .
But hey . Iam single , so what do I know . ?
I know avoiding ( working around ) conflicts , is important in maintaining a good relationship.
Learning the hard way.
Yes well pruned raspberries are important
But …

Post some pictures and you will get better responses.

**Wait until spring. You’ll see dead canes. Cut them out. That’s about it. The roots are sucking energy out of the dead canes so you don’t want to cut them too early.

**At least with my back yard variety. I can’t remember off the top of my head what it is called, but it fruits on second year growth canes and then dies. The first year growth canes don’t set fruit until the second year, so you don’t want to cut those. The dog chews up the dead ones over winter so I didn’t have to prune any this last year.

Bill… I think Hillbillyhort makes a good point… above, that I did not notice on first reading…

She planted them, She does not want them pruned…

No way considering that… that I would prune them while she is gone. I think your best bet is to explain to her the advantages of properly trellising, pruning, etc… but if she still says no, I think you best listen to her.

You could then always plant your own raspberry patch, properly trellis and prune them… and once she sees the advantages for herself… she may go along with your ideas.

PS… for us married guys… The secret to a happy life, is a happy wife

I was going to say what @Hillbillyhort said. They are her plants. Don’t damage them when she’s not around. Yeah, you think they will be nicer pruned, but from her perspective you are just damaging her garden. Raspberries aren’t worth fighting over.

Agree with the hands off approach. Not worth the argument, just be happy your significant other is so passionate about growing food. Many people have a SO with no interest in gardening or growing food.

If I was in your situation, I would definitely try to share YouTube videos showing the benefits of pruning, both for the cherry trees and the brambles.

I would also frame it as training instead of pruning.