Hopefully its ok to talk about flowers as part of “Gardening”? I’m not a flower person, at all. But my city recently had a big fall festival and we decorate heavily with potted mums. When the festival is over, we try to sell as many mums as possible but always have a lot that don’t get sold and just go to waste.

This year we have about 40 potted mums (1-2 gallon size mostly) left, and I’d really like to do something besides letting them die and throw them away, which is what happens every year. We can never even manage to keep them alive more than a few weeks after they bloom.

I’ve heard you can plant them outside and they will live and come back the following year, is that true? We are zone 6b/7a and get winter low’s around 0 at least a few times each winter. Will they survive that? Are there any other ideas or suggestions on how I can keep mums alive after they have bloomed? Thanks.
kevin

They should be hardy for your zone.My aunt had hardy mums that came back for YEARS in 6a/6b, mid-Atlantic (they may still be holding down the fort, for all I know.). Very attractive, and I think they bloomed in the summer. Provided a lot of color to the landscape.

I’ve only had them in zone 8, and they seemed to thrive on complete neglect. I probably would’ve had to make a concerted effort to kill them.

I think you can plant them in-ground and expect to have them survive, with one caveat. I’d get them in-ground ASAP to give them time to adjust before winter and very cold temperatures come. Maybe have a heavy hand with the mulch–a bunch of shredded leaves, perhaps?

I mean, I guess the worst that would happen is that they would die, and you just did some in-ground composting.

But really, I see no reason that you shouldn’t get decent survival rates.

Thank-you for that! You’re absolutely right in saying I don’t have much to loose by trying it, because if I don’t they will certainly end up in the dumpster.
But after I posted the question I did a little googling and from what I read there are suppossedly 2 kinds of mums: Those that are sold retail in pots like mine are “Florist Mums” and there is another type that is less attractive but much stronger and hardier that are (appropriately) called “Hardy Mums”. From what I read, the florist mums are difficult to impossible to make live in anything below zone 7 (some places said zone 8), so that doesn’t bode well for my chances. But I ALWAYS appreciate first hand experiences like yours to any type of article. You just never know about articles. Just last week I was reading an article in a well known publication (albeit not a gardening type publication) which went into great detail about how a person should try several apples at the grocery store, find the one they like best, and then save the seeds from it and grow them. It had all kinds of instructions on how to sprout the seed, how to grow it indoors until its large enough to plant outside and so on. Not a single word about grafting a known cultivar onto it or any mention of the fact that planting a seed from your favorite apple even MIGHT NOT grow into a tree that would produce that same apple. I couldn’t believe it…apparently their fact checker was asleep that week.

Anyway, point is I’ll take your word over some articles, and give at least some of these mums a try. thanks

I always plant my hardy moms in the ground. Some of them survive just next year. Some, if not on the way, can grow and grow for many years. Keep in mind, when they succeed, they multiply in size. So if you want them come back again and again, plant in fertile soil and give them enough space. The problem with decorative mums is that their root may be overgrown in the relatively small pots and that may be a bad factor in survival. This is why I usually buy them BEFORE they started to flower, and in smaller sizes. But you still can try. Here is how they look like on year 3: 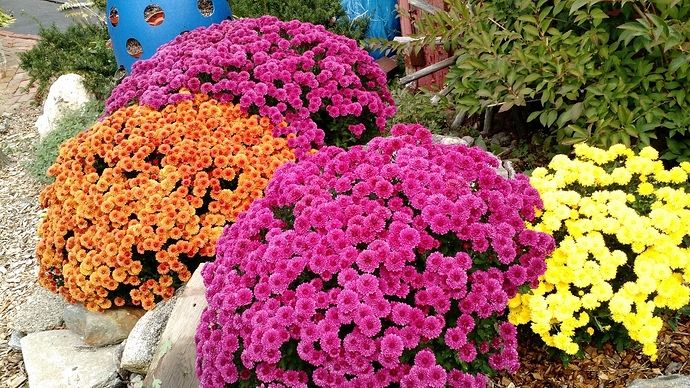 For florist moms you have to dig the roots in late fall and store it certain way, then plant into the soil again. I can find few articles on it in Russian, but not in English. If you interested, I can translate for you what I found, just keep in mind I have no experience myself with it.

I chopped my down to about a 1/2 foot. Add a bunch of dirt to cover them for Winter protection and remove the dirt mound in late February. All my mum’s survived the last 10 Winters in Zone 5 (-10 to -20 F)

Garden mums, without protection, will be dead and not comimg back in zone 6.
Hardy mums, with little to no protection, are likely to be back. They are perennial.

In your case, you can still planted them, a bit deep, water well. Don’t let them dry out. Then, mulch them well, thickly like Tony does. They have a good chance will return next spring. It also helps if you planted them near the foundation of your home.

I have the hardy mums flowering for the third year. I bought them as tiny plants on sale for 30 or 50 cents each and they are large bushes now. Did not do any protection in winter and we are zone 5b and we have usually very little snow on the ground. The florist’s mums have large single beautiful flowers whereas hardy mums have small but very colorful ones. It does not hurt to plant them and to see if they grow for you.

I agree with the above. My wife and I have planted hardy mums in the fall and have had them come back. But we have had better luck with ones that were planted earlier in the fall. Now we usually wait til about the last week or two of Sept to plant them, but I think the years we have planted earlier they came back. The later planting date has led to more variability in them coming back the next year. This is in Iowa, Zone 5b. Our killing frost is usually sometime between Oct 15-30.

Thank-you all. Lots of great information and everyone seems to agree, so I’m sure you’re giving me good information. I guess I’ll try at least a few of them, but they just aren’t important enough to me to do a lot of winter protection work so I suspect they won’t live from what you’ve all said (considering I’m pretty sure that they are “garden mums” or “florist mums” as some have called them. But who knows…I might get lucky and its worth a try.

BTW, @galinas , it was an incredibly kind and generous offer to try and translate some Russian articles you found- and I also appreciate you even looking- but I’m not a big flower person so this just isn’t close to worth asking someone to do that much work…but thanks!

City, Those big pots of mums are several plants together and the garden mums(florist) are treated with a growth regulator to keep them bushy. This keeps them from establishing well plus you add a very light, doughty, potting mix and when they go outside they wilt rapidly. If they get rooted and mulched before the real cold stuff and a layer of snow they survive ok in z5a.
To get them bushy w/o a GR, you pinch them as they start to elongate, up to 3 times and stop by the 4th of July to let them set flowers. I pinch mine with the lawn mower, because I forget where they are, and they do… fair.

No problem, I was looking for information few years ago when wanted to overwinter a mum I bought around Thanksgiving, the one with one huge flower, but decided it is too much for me. Large-flowered moms are not that popular here, but in Russia in fall and winter it is most popular cut flower, so I new I will find the info there. And I am fluent in Russian, so no trouble at all

I didn’t see anyone mention it, but it was alluded to; you’re probably going to need to root prune a mum that has been potted through the season. I live a much warmer place than you, here in the southeast, and I have needed to break up the root ball and severely prune mums to get them to establish. When I don’t, the light compacting mix they usually come in just doesn’t work in a hole, and they are easily uprooted intact and still pot shaped much later. Even so, I don’t care for them carefully in the winter and I haven’t gotten them to do well the next year.

Generally the reason mums don’t survive the winter is that they were planted too late to establish before winter. They are perfectly hardy in zone 6 if planted early enough. Keep in mind the plants are in full bloom, there will not be much energy going into root growth. If you can get them planted in September or even August that is better than October or November.

I have heard some claims made that some of the modern hybrids are less hardy, but no proof either way.

@thecityman what did you end up doing with your mums? Did any survive?

funny you should ask! Just last week I put in an order for 30 mums for the same annual event that we had those leftover from that I was trying to save above. I ended up planting about 10 of the potted ones we had left over and not a single one survived. Honestly, I don’t think it was even winter freeze that got them…as soon as they finished blooming they just died off-just like they do if you leave them potted. I thought maybe they would come back in spring or maybe late summer or fall, but they didn’t. Now, to be fair I cant say this was a great test, because i didn’t do a great job keeping them watered or caring for them after I put them out, and they were also already in decline by the time I planted them. So in some ways the odds were against them. But it was a good enough test to convince me not to bother trying the replant the mums we have left over this year.

BTW, what @ampersand said makes very good sense, and is likely the problem I had. Our festival isn’t until 2nd week of October so our mums had already fully flowered and were in decline by the time we planted them in mid-October. So they had little chance to establish in-ground roots, energy, or prepare for winter/