I am interested in persimmon. Not that I could ever grow them in Wisconsin. Just hinting for information on commercial japanese persimmon.

A friend moved to California two years ago and found he had a persimmon tree in his yard. He tells me that when the leaves are yellow and dropping off the tree in November then they are ripe. He sent a bushel of fruit back to Wisconsin with a family member who sent a bunch my way last November.

First time I ever ate persimmon. So sweet and wonderful! I presume they must be one of the japanese varieties. I have searched the local grocery stores around my area this Fall to no avail. Nobody sells persimmons.

Do they not ship well? Or is it that they do not store long? Must be a reason why they are not available in my area grocery stores. Hopefully someone from California can answer my questions.

While in ground Asian persimmons aren’t realistic for you, hybrids such as Rosseyanka and JT-02 and Americans such as Prok, Meader, Early Golden and more could likely do well in your zone 5 climate.

The few Asian persimmons I’ve tried from the store were bleh compared to small Americans growing in the woods nearby. The only thing the Asians had going for them was the texture that is typical of non-astringents. Most persimmons do not store nearly as long as commercial apples and there is little demand for them, hence the lack of them in stores in most locals.

Around here the Asian grocery stores sell them quite cheaply by the case in mid-fall. If there is one in your area, give them a ring. The main grocery stores sometimes have them as specialty fruit, but at big markup.

You may be able to grow Rosseyanka or an American persimmon, depending on where in Wisconsin you are. But not a non-astringent…

Zone 5, you may grow any American persimmon. If you’re along the lake you should have JT-02, grafted.

It’s up to you, but, you may want to write which county at minimum where you live.

Where are you in WI? I’m near Waupaca and going to try one next year. I think Early Golden. Pick & Save usually has some Asian persimmons for a month or so. I got them once and they weren’t very good.

I am in Northern Waukesha county in Southern Wisconsin. We definitely have a lake effect here from Lake Michigan. Our spring temps are slow to rise because of Lake Michigan being so cold. My apples ripen about 1-2 weeks later than same varieties grown farther west by Madison, WI.

We have Pick N Save and Piggly Wiggly grocery stores around my area and I have tried but never see persimmons for sale. Someone did mention to me that whole foods in Milwaukee may have them. I will try Trader Joe’s next as we have one of their locations somewhat near me.

My understanding is that practically every native persimmon will set fruit fairly well without a separate pollinator, and I think there are much better persimmons than Meader.

You might ask Tony when JT-02 ripens in Omaha and if it’s not November you could attempt to formulate a comparison among Tony’s heat units and season length but definitely first find out to which temperature persimmon buds are damaged at. Pecans for example are not damaged until 28F. So knowing that 28F is the # that extends the number of growing season days…

There are input calculators like this one where you find out bud hardiness and set the caluculator to represent that and then let it tell you how many days you will have.

Good luck with what you do and what you may decide to plant. 1000 cooling degree days (heat units) is what it takes to grow pecans (w/o using calculators and seeking cultivars that are ultra-early-maturing) and is a good # for remembering the minimum to be considered hot-growing-summers.

Not sure if you’ve seen this one or not, but this is another good calculator/graph for GDD I stumbled on. U2U@MRCC: Corn Growing Degree Days (GDD)

Thank you all! Sounds like Prok is the one for me to try.

Thanks Travis. That’s a dandy of a link.

Here’s the version for the Northeast:
http://climatesmartfarming.org/tools/csf-growing-degree-day-calculator/
I think there are versions for the other regions of the US as well, but I haven’t found them all yet.
I’m working on a nationwide interactive average GDD web map using data from the National Phenology Network, but I haven’t worked out how to share it in a way that isn’t an abuse of company resources…

Good morning. I moved into a house in Odessa, TX which has a mature persimmon. I am totally unfamiliar with persimmons and need some advice. The bark on this tree says it is D. virginiana, the fruit, however, is small, purple, and very bitter even now in December. A blue jay was munching on some, but the squirrels leave it alone. Is this possibly D. texana? If not, can I graft better tasting varieties on this old tree? Thanks, doug.

It probably is Texana. Virginia persimmons are larger and orange. It should be sweet. You might have a soil deficiency that is making them bitter. If there are improved varieties of Texana I have not heard of them.

Would you take a photo of the leaves, fruit, twig, “anything” more. I’d really be interested in buying/trading for D.texana seeds. 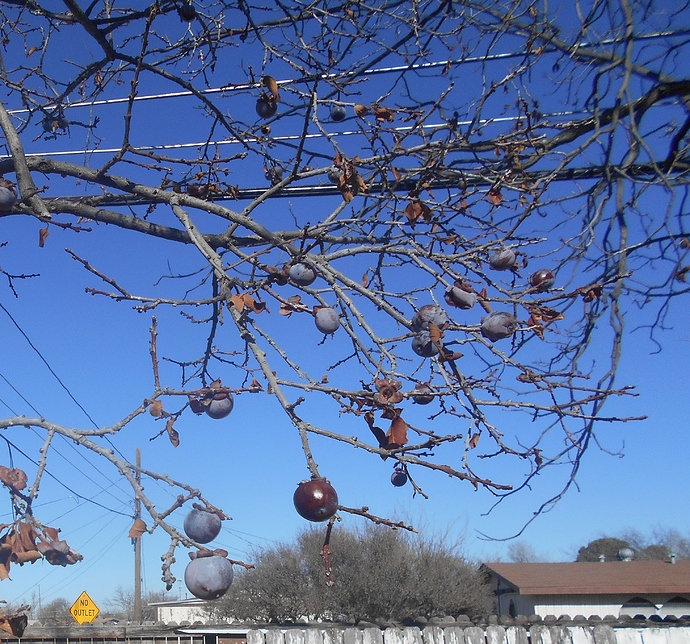 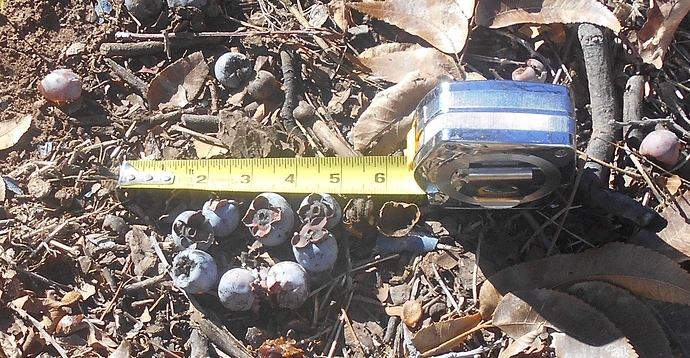 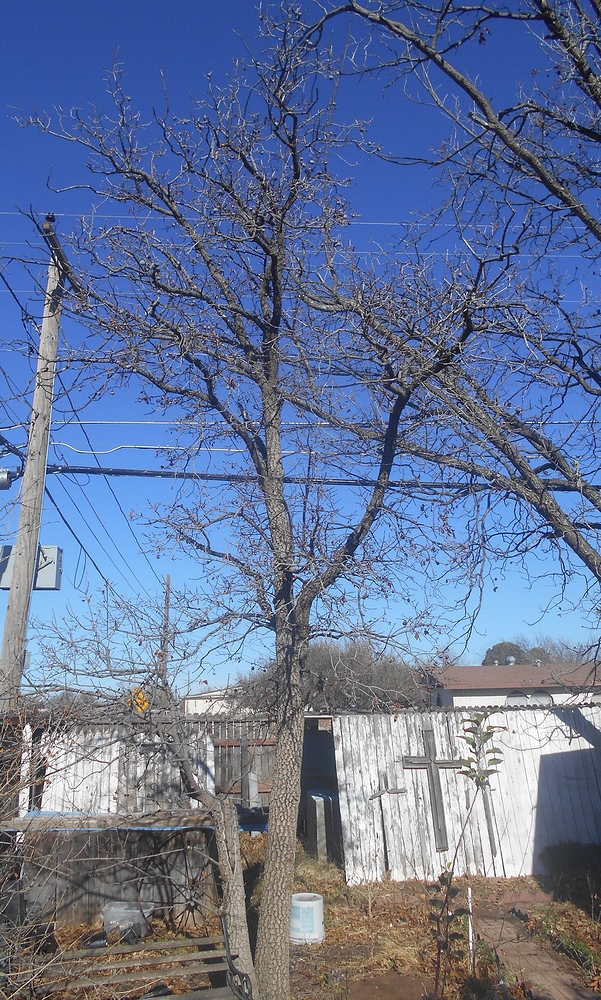 Hello Dax, here are some photos of the bark & fruit. Leaves are pretty well withered now. It looks like a virginiana persimmon, but all the pics I see of american persimmon on the web show yellow-orange fruit when ripe. These remain dark purple with a waxy blush, and very bitter.
I too want to grow Texas persimmon more as a landscape tree so will be trying to find fruit this winter. I am new to Texas so it will take me a while to find.
I read that American and Asian persimmons do not graft onto Texas persimmon. Is that true? Size and resistance to root rot would seem to make it a valuable rootstock.
take care, doug

We have Pick N Save and Piggly Wiggly grocery stores around my area and I have tried but never see persimmons for sale. Someone did mention to me that whole foods in Milwaukee may have them. I will try Trader Joe’s next as we have one of their locations somewhat near me.

Costco here in Iowa sells Costco-sized clamshells of Fuyu persimmons every year. They might be still in store now here. I bought my yearly package just before thanksgiving and still have a few left in the fridge.

Despite what the packaging says, I think Fuyu is way better if allowed to soften on the counter to nearly the consistency of a ripe American persimmon - soft and jelly-like.

Those can store for many many weeks and I could barely tell any difference besides a tad softer.

You have D. virginiana there.

I’ve seen blue fruit on cultivars but also wild seedlings. It’s not common no, but it happens. Your trees fruit are at the perfect stage for fresh eating (blue, orange, yellow (‘Early Golden’), it doesn’t matter) however, you have undesired flavor and therefore your option is to set bark grafts grafts on limbs 4" or less.

This quick video shows and explains the whats and whys of what you would be doing.

Thanks, Dax. I will try some bark grafts this spring. I am thinking of leaving the main top trunk for the blue jays, and grafting onto the lower branches. The video is quite helpful.
If I find D. texana this winter, I’ll get you some seeds.
take care, doug