Its possible! I’ll give that a try.

If the cuttings won’t root. You can also try and dig up a few roots. And root graft those onto sticks you cut of the tree. Dormant would probably be ideal for this. (inside in a box of damp coco-peat?) Don’t wrap your root grafts to much. A single elastic/rubber for pressure is enough. No need to keep moisture in with parafilm or plastic.

I planted a Siberian peach several years ago. It is protected in a cylinder of hardware cloth. Still barely knee high. In full sun. Not exactly a success story.

I remember you clearly have a dud there. Why don’t you try grafting a bit to a different peach and vice versa

i too dream of growing peaches here. ive heard of siberian peach. how to they taste? i havent heard a review of them. im trying sweet cherry and pawpaws on the south side of my house this spring. if they do well i may try a reliance peach.

I would prefer to cut it for top working, if it has significant time left to live, or just replace it. However, the tree holds sentimental value to someone else…

Wanted to offer some thoughts here. I certainly appreciate the sentimental value of trees, but as @mamuang points out peach trees are fairly short lived. Most commercial trees last about 12 to 15 years. The oldest peach tree I’ve seen is 25 years, which is very old for a prunus persica (eating type peach tree).

Your tree is going to be nearly impossible to bark graft, and based on age and appearance is not worth trying to top work, imo. It’s not super vigorous based upon the red wood it is producing.

Mamuang asked about the red wood, because the amount of red wood (i.e. new vigorous shoots) is an indication of the vigor of the tree. An older peach tree with poor vigor is an indication the tree is approaching the end of its life.

Unfortunately, peach trees are one of the toughest types trees to graft, and trying to graft to rough bark on a peach tree would be very very difficult, imo.

I am certainly not trying to be a wet blanket on your plans, but just pointing out the realities. If you want to try to bark graft to have fun, then of course, give it a shot. But if you are looking for significantly better odds of success, I would plant some pits of your peaches, grow them out over a summer, then fall bud them. If they don’t take to fall budding, you could still spring graft them the following spring.

Thanks for the input.

I will save scion from this tree.

The replacement for this tree will be nearby but not in the same space. So, when It is cut, I may try to graft a few scion from itself and other varieties, to see what happens.

If this is a Siberian Peach, the taste is good. It is sweet and better than store-bought peaches.

Unfortunately, I have had little luck growing seedlings thus far. Last year I planted around 40 seeds from this peach. Only one seed grew to a whip, but it did not survive. This year, I attempted a couple dozen more from peaches, and plums; Only one plum has sprouted. I kept all of the seeds in the refrigerator for 5 months, and placed them in water to determine which ones were viable, prior to planting.

I’ll be putting in a few more hazelnuts this spring. Is there any reason why planting them a little deeper than the original soil level would be a bad idea? Their suckers will root if mound layered so I’m betting the trunk of a young nursery plant would too. This would be done to speed up planting so I don’t precisely fuss over the depth of each hole.

I have never seen anyone recommend planting below soil level.

Your peaches are small could be one or two things:

Siberian variety or not, I don’t know. Rootstocks can be a lot of things. It could just be an unnamed seedling grown from seed.

I never do anything fancy to get seedlings. I just plant seeds in ground about 2” deep in the fall, If quirrels do not steal them first, they sprout the following spring.

Some hazles can be grafted on a (turkish??) tree hazel.
I would not plant those any deeper.

i think your likely to be oky. It will depend mainly on the age of the stem your burying deeper. Older stems seem to root harder, or might not at all.

I know with apples they did a lot of tests with M9, budding it high and than planting deep. To see if they’d get better anchorage. I think those where 1-2 year old rootstocks. And they had no dieback. Or no statisticaly significant dieback (large enough experiment there is always somthing that happens or dies)

long story short. You could do it. But there is some risk involved. Unless there is a large advantage, id just plant them at the depth they where at. (if their older than 1 maybe 2 years)

Safe to graft scion to? 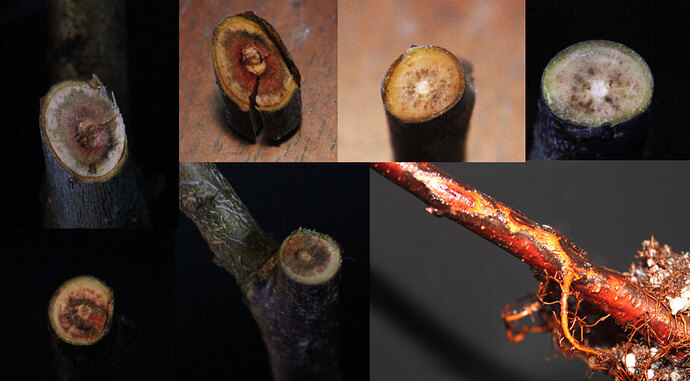 That doesn’t look good to me, but I have never grafted stone fruits.

If you cut a little further down, do you see green wood?

Is there any bark damage around the spot where you’r making the cut?

I’m wondering if @Fusion_power is out there? I was having a discussion about tomatoes in the south and heard you’ve had success? That maybe you could recommend some that can take the high humidity over in North Florida…

Extreme disease pressure as a result of a highly humid climate is the actual problem.

Here are a few suggestions.

Probably to late for planting now?

I have a Keiffer Pear, and Ayers Pear. Are the following varieties compatible to graft onto them?

Opinion on whether to Graft, or to root the scion?

I don’t know what it is.

I could just be fine. It could be a nasty soil disease.

Just in case of the later. I would plant them out on a spot you can abandon tree growing wise. (vegtible patch for example) keep them there 1-2 years to detirmine if their sick or health. And if their sick. Don’t plant new healthy tree’s on the same spot. Or at least switch species (stonefruit to pitfruit or vise versa)