Hi Fruit Growers
We in Chicagoland has a very late -27 deg frost the other night and it knocked out all the blossoms on one of my orignal peach trees. In the picture there is an eight foot ladder, 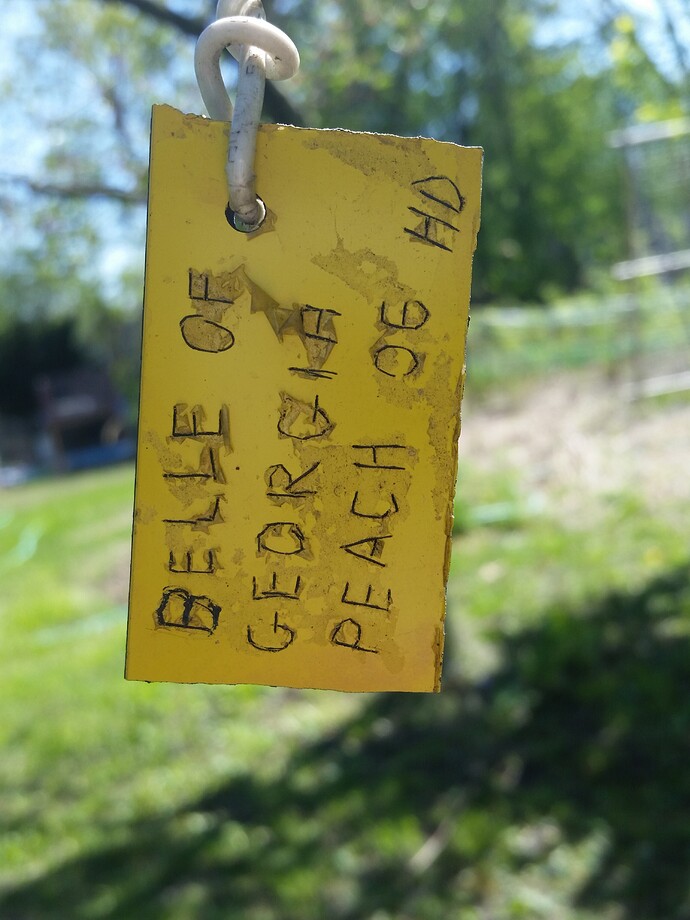 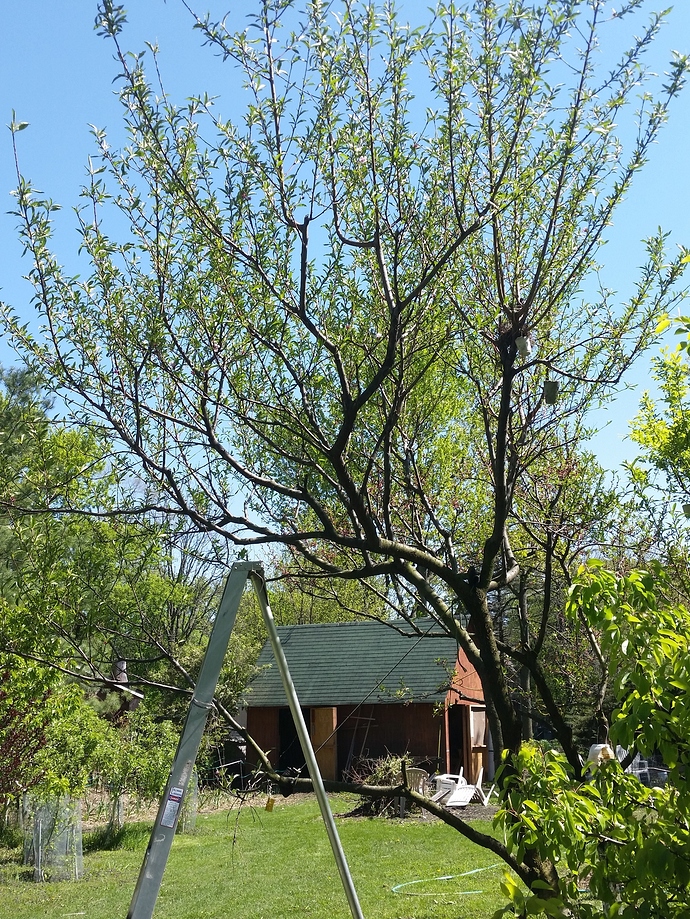 1792×2390 2.68 MB
so you can see all the groth and blossoms are up in space. This is one of the trees which I didn’t control the height when I was starting out in this crazy fruit tree passion.
OK I was contemplating chopping off 75% of the tree (see RED lines) now in late spring. Should I do this? Should I do it when dormant? Should I do something different? All the fruit is so high, I need a pole picker standing on my eight foot ladder! I can’t even prune back new growth! 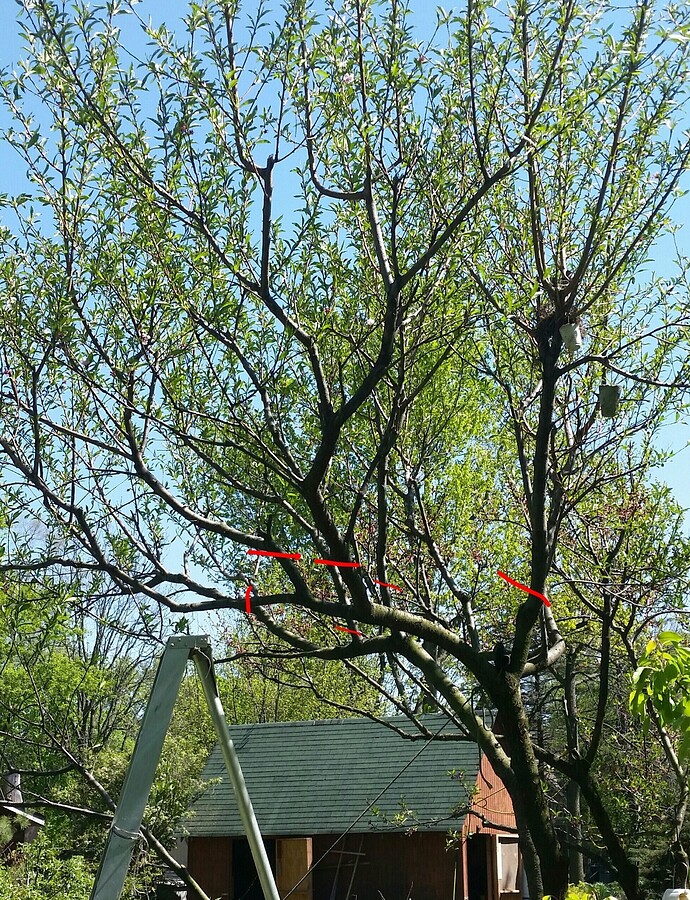 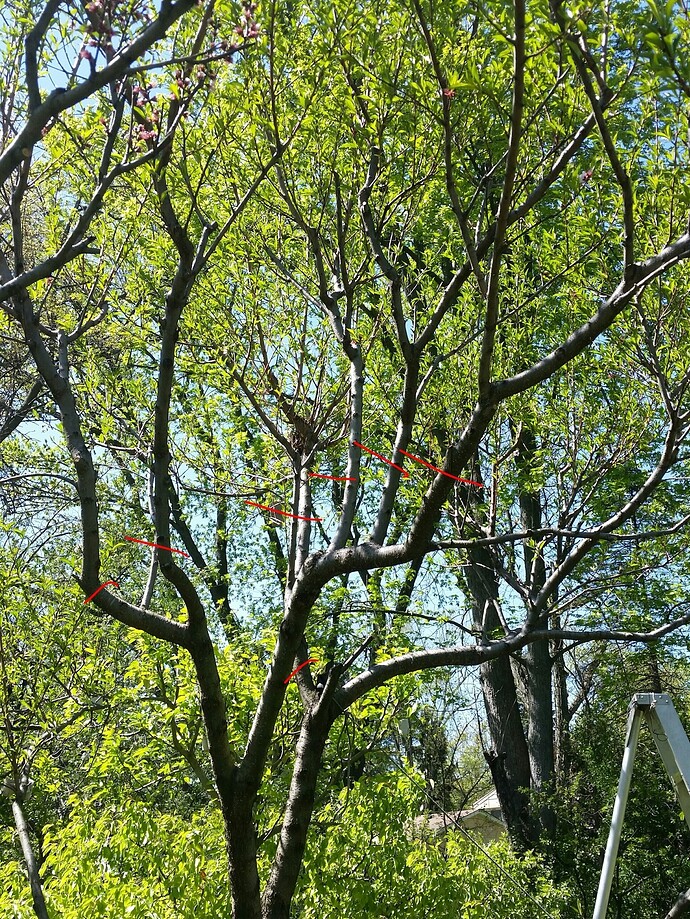 That is exactly where I would cut. The new growth will get long fast and still be higher than you want but you don’t have a good alternative. Maybe after pruning you will get some sprouts down low. If so then you can cut the top lower.

My 12-year-old O’Henry was getting too high and lanky so I cut it at 4’ early this spring so its nothing but a main trunk. It is growing back one sprout from the top and one from lower. Personally that is what I would do to your tree as well: in early spring right before leafing out I would cut back to the trunk at 4’ or so. That low branch looks like it may be able to sprout something at its base, I would leave a few inches on it to give some potential sprout spots.

This is risky, it could sprout nothing. You could also take Graftmans approach which is safer.

Scott, I did something similar to my Illinois Everbearing mulberry. It was 25 feet tall and easily 30 feet wide. It’s now about 5 1/2 feet tall with 2 potential knobs to push new growth. My eventual goal is a 3 year rotational pollard so it can still fruit. Perhaps I’ll even get more than the birds.

This way my pawpaws nearby might fruit better as well.

I really should take some pics before the new growth starts.

I’ll admit the pruning looks rough right now, but mulberries are supposed to be able to take it (I hope). Keep me posted on your pollard, please. 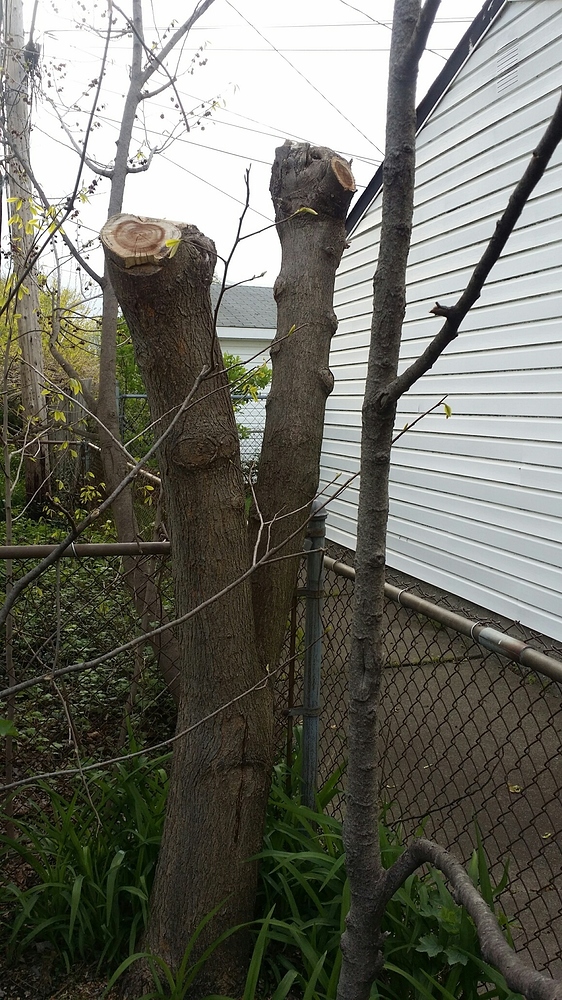 In the background there, under the power lines, is a pawpaw with well over 100 flowers on it. Last year it was cleaned off completely by raccoons, squirrels and possums.

The best thing to do is to get into your time machine and go back about six years and don’t let this or any peach tree get so big. But for the present, some serious cutting back is needed. Take Graftman’s and Scott Smith’s advice (I’d prefer the latter) and get cuttin’. And do it now.

How does an overgrown peach respond to a radical beheading in mid-May? Better to wait until next winter as Scott suggests? A friend’s tree is similarly overgrown, glad to see this question asked.

Waiting to do it until next year gives the tree one more year to overgrow. Possibly to attract more borers as well. I would do the job now. It will sprout plenty of new shoots, giving you a good number of shoots to choose from for the new scaffolds. Nothing to be gained by waiting, especially since this tree is 11 years old, elderly for a peach tree.

All right folks, the deed is done. Pollarded the old peach, mid May 2017. I left a couple small branches for some photosynthesis and watered the heck out of it. I will report back here end summer and next spring and we can see the results. Also should I fertilize it now? 10-10-10 or something? 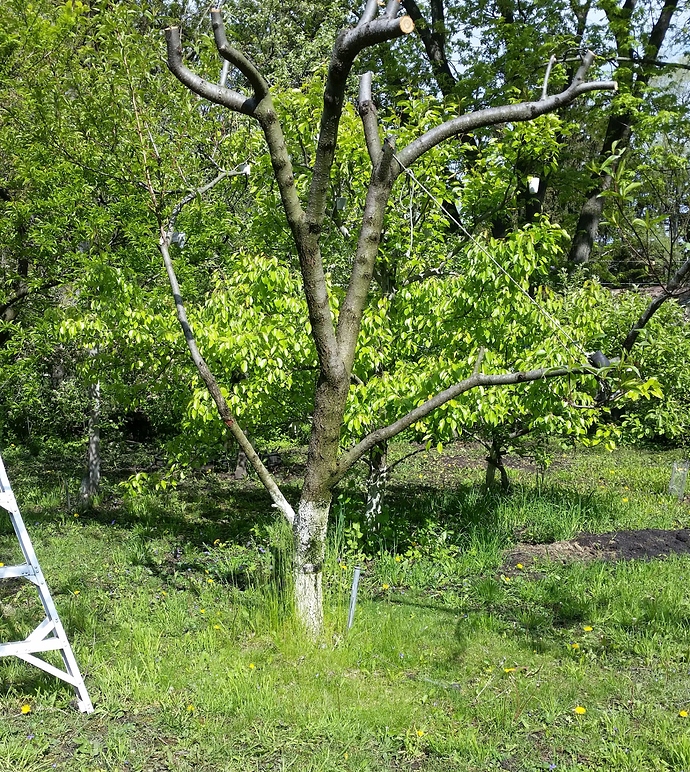 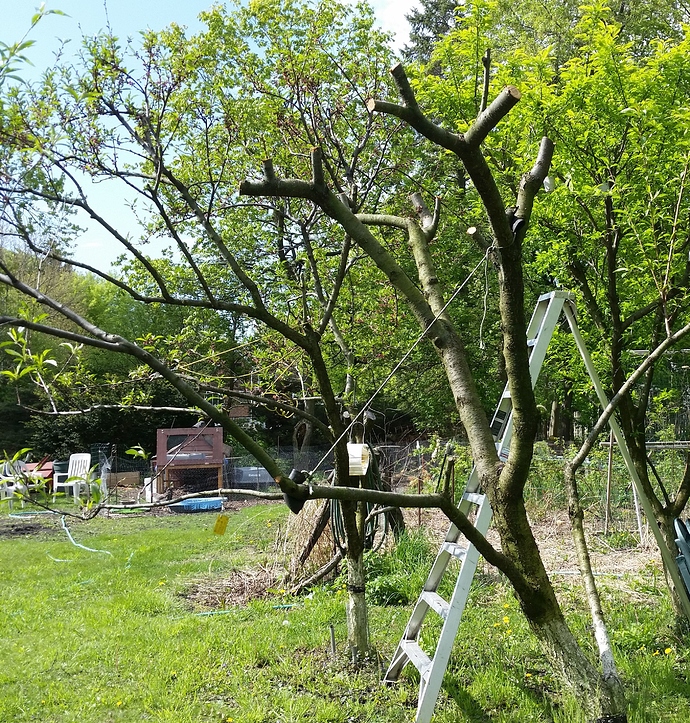 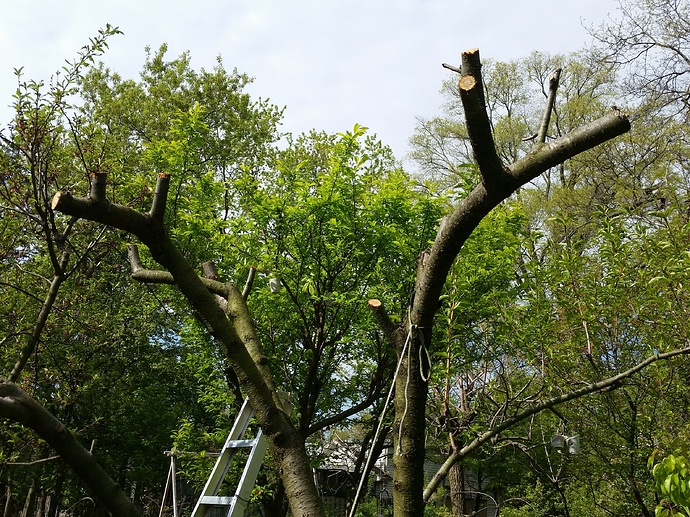 In my area I would be worried about sunscald and painted the tree white to prevent this.

That peach tree after topping it off still way too tall. I don’t like to climb ladder, so I would chop it down to 4 to 5 feet and let let the tree send out a bunch of new shoots for one growing season and then next Spring prune it to your liking. I love all the low peach trees of Mark in KS.

Please do post the results of this. I was planning on doing something similar to a Redhaven that is headed towards too tall. Except my plan is for early Aug after I pick fruit. 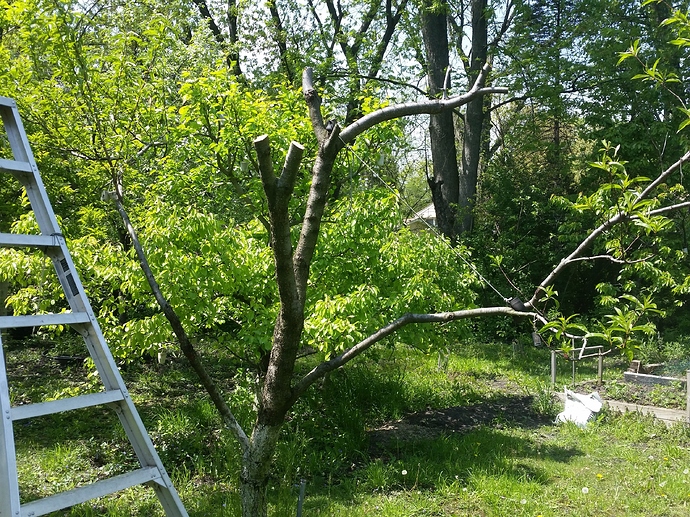 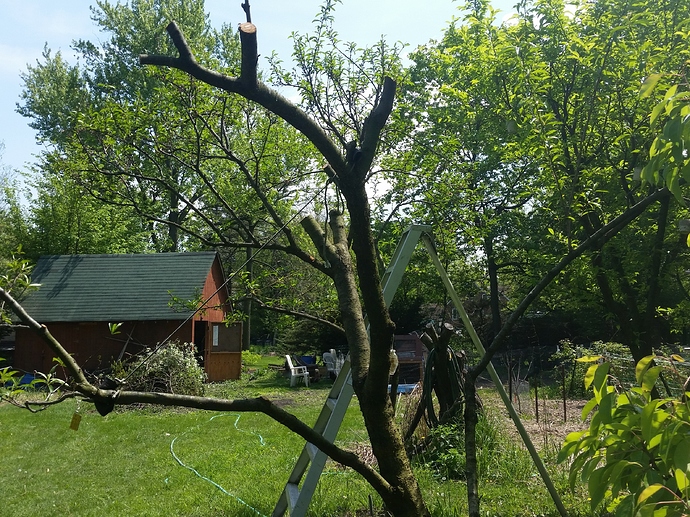 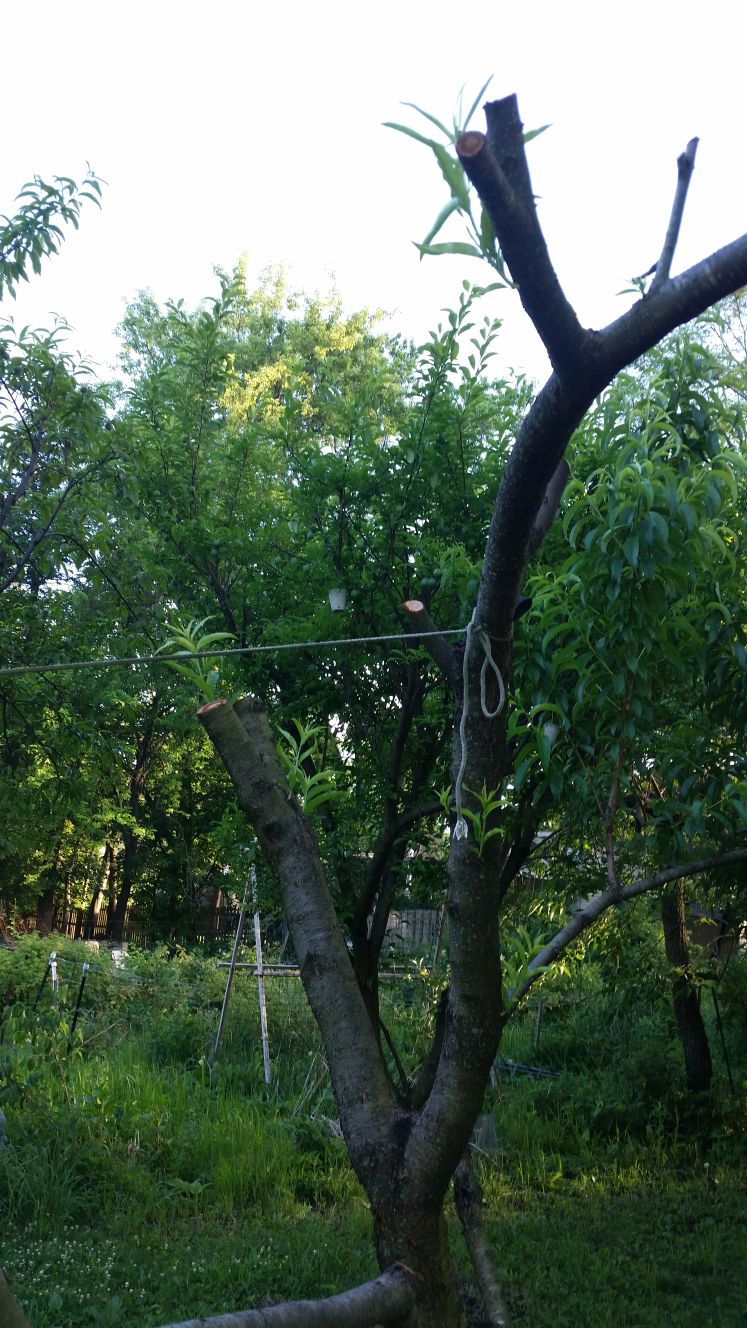 My O’Henry peach looks similar now. Well, it was headed lower. I wasn’t sure it was going to come back but its sending out vigorous shoots now.

OK the peach pollarding was done May 11. It is now August 14. Here’s how it looks. There is still a main branch going west, and one going east (that I left for some photosynthesis) that I think I should remove … when? both or one?
Also I need to select new growth to be future branches… which ones…when? 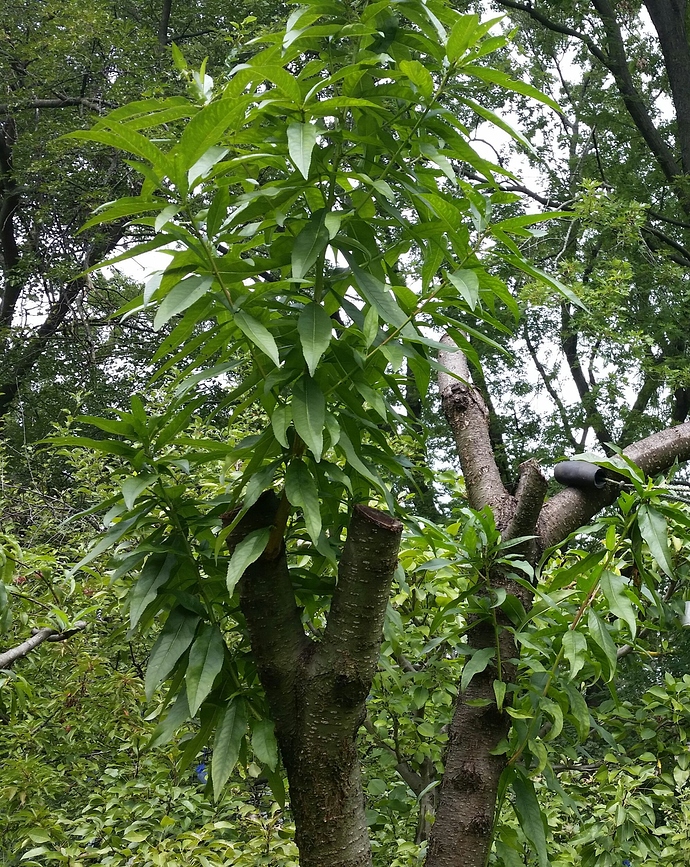 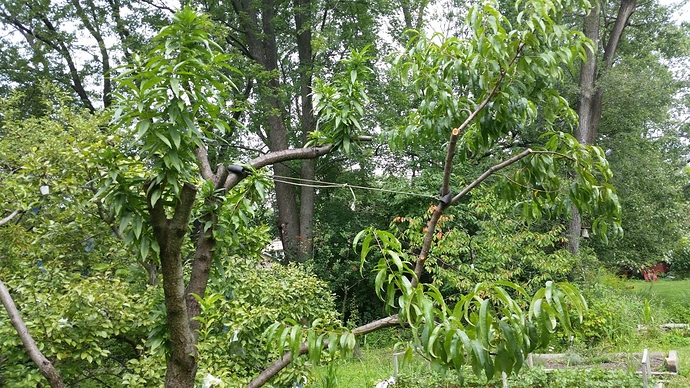 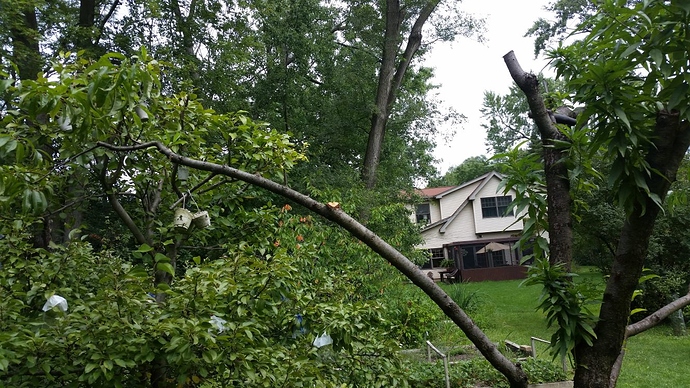 Ok it is August 28 and I removed both nurse branches. I may bend down some new growth and prune some out. So far so good.

Patrick, Could you post an updated picture? I am curious as to what your tree looks like now.

None of my peaches have leafed out yet after a real tough winter in the Chicago area, but buds are plump. Another peach I did the 1/3,1/3,1/3 method… 1/3 radical pollard this year, 1/3 next year and 1/3 the third year. Here is the tree. …all shoots are alive. 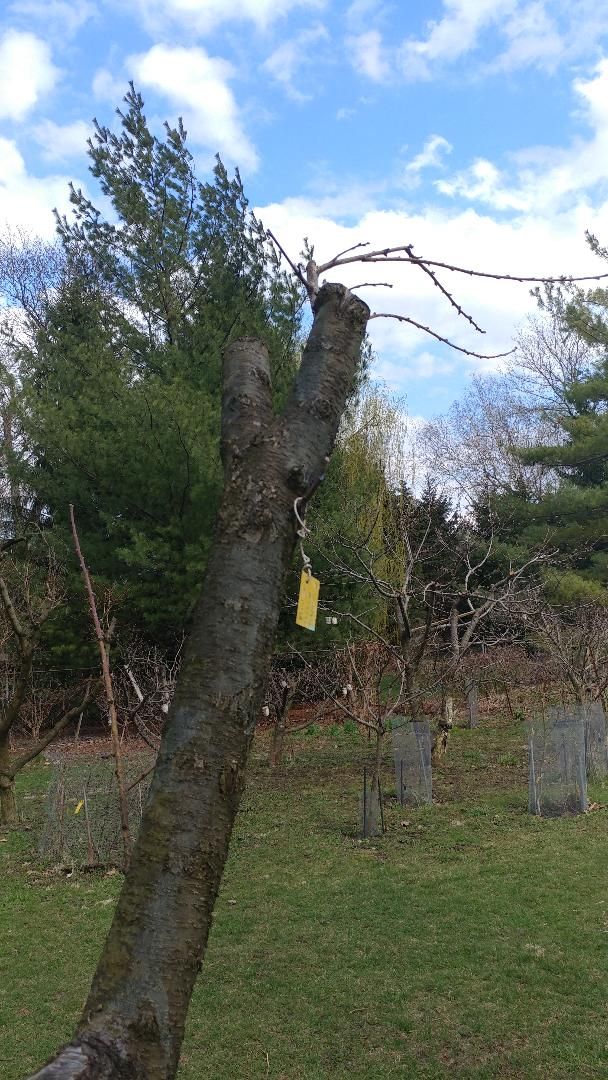 well three years later, here is the pollarded peach that I started this conversation with… will not do this again… 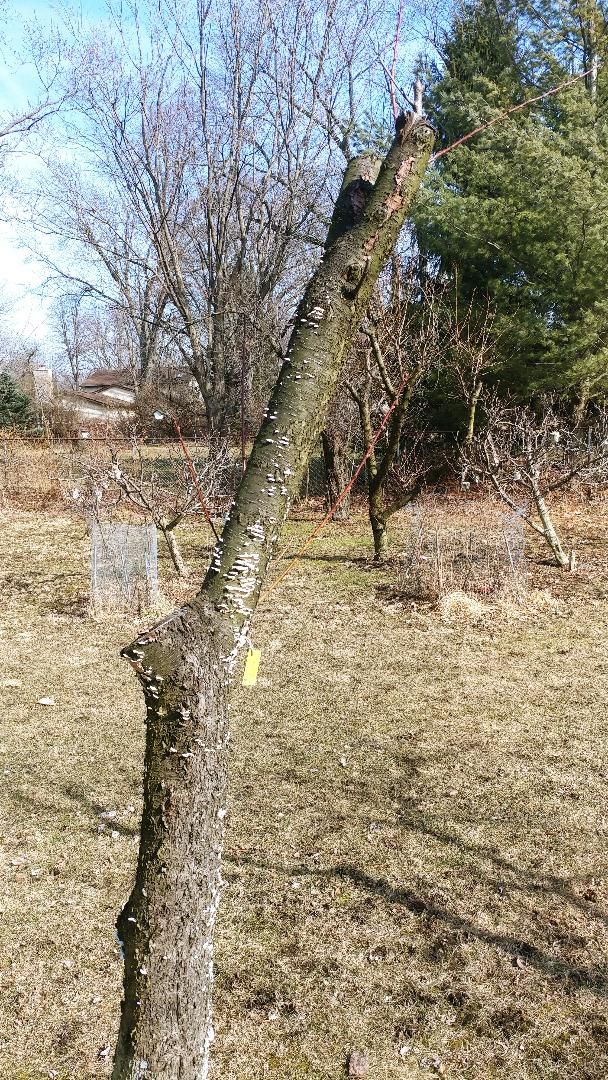