I’m trying to figure out if I should plant Asian pears in a raised bed or just put them into native soil. They’re on Pyrus betulaefolia root stock. I figure it might be easier to water them if I had them in the ground with a berm around them. However, I worry that when it rains (when it rains, it pours) it will damage the roots of my trees, despite that it’s typically drought conditions during the summer.

What should I do?

What should I do?

Both! Native soil in a raised bed.

It depends on your kind of soil. E.g. in my sandy soil pouring rains are no problem at all. But heatwaves are for young trees even with regular rainfalls. The water drains away too fast. I wouldn’t recommend raised beds in such conditions. Most soils drain much worse though. Then Drew’s advice comes into play.

Yeah assuming raised beds are needed it is best to use native soil so roots don’t stay only in the good soil only. For me I have excellent clay loam, so top soil is actually worse soil than native, so if I need more soil I use top soil as the plant will be glad to leave it for the rich native soil.

For me the higher I can get the tree out of ground, the higher the brix of the fruit. Drought conditions work for me in raised beds. Sure when tree is young you need to watch it and water when needed.

I don’t think I have enough native soil to make a raised bed without making massive craters in my yard. I was thinking about mixing 50/50 garden soil (from a retailer) and native soil as well as some soil conditioner to make a 6" hole for the plant and then putting in the raised bed 6" high.

I also have some peach trees that I’m going to elevate in pure sandy loam beds.

Water doesn’t pool in my yard for a long time, it’s generally super dry. We go weeks without rain and the deeper soil is rocky.

You can fill the holes in your yard with top soil, that is what i would do. I would check this out too

Well... Here is a lesson to learn General Fruit Growing

Here is a lesson to learn from. When I first started growing fruit trees I thought it would be an excellent idea to amend the planting hole with a tad bit of Tree & Shrub “soil”. The bag clearly stated mix half native with half T&S so i thought what the hell… Should work, I just got to break the side walls to allow for root growth outwards. I did that 2 years ago. This last season I decided to use that area for my new raised beds so the tree (Splash pluot) had to be moved so I decided to pu…

Understood. Based on that thread, I’m going to use 80-90% native soil with the balance being soil conditioner, worm castings/compost/mulch heavily, and watch the darn thing grow.

I’m also going to try to grow something that isn’t a peach or plum and see if anyone I know wants the trees I purchased, as both are grown on nemaguard. How disheartening…

Nemaguard is the root stock that A&M recommends for Texas. Roots can grow in a circle, but most do not. Just make sure the sides of the hole are not slick and hard and the roots should spread out. I don’t think peaches are any worse than any other trees. I have seen several hundred wind break trees that were grown in one gallon pots and planted by using a post hole digger. Maybe one in a hundred roots would grow in a circular pattern that would kill the plant later. They were pine trees that I would assume to be worse with circular roots than peaches.

I am going to contradict some of what has been said about using amended soil - I am outspoken on this. In my environment I have hard clay soil. I wasted the first 5 - 6 years trying to grow fruit trees only to have everyone of them stunt due to bad soil conditions and never produce one fruit. I wish I had saved a picture of a Keifer pear I planted. Two years later I decided to move the tree and the roots had zero growth when I dug it up. The tree had grown some but the rootstock was not prospering in any way considered healthy or normal.

Based off of advice I got on this forum I started planting in raised boxes in some areas of my yard where I know the soil is the worst. I have peach and apple trees now doing really well in these boxes. I am planting in 4x4 raised boxes (10 to 12 inch sides). I have no way of accurately knowing how much I amend the soil but at the most it can only be between 10% to 20% amended soil- it takes a lot of dirt to fill that size box. I experimented with one box where I did not use any amended soil. The tree is prospering but it is not an apple to apple comparison because the tree was much smaller and on different rootstock than the other trees I planted this year.

My advice - try planting in raised boxes and at ground level - you may not need raised boxes. Start off without amending the soil but if the trees don’t prosper than amend. The largest wholesale nursery in Virginia (I can’t find there name) which supplies most of the trees to smaller local retail outlets in Virginia including some of the trees to Edible Landscaping recommends up to 50% amendment. I am sure there advice is geared for Virginia not Texas. Best of luck…

My local nurseries recommend 33 to 50% amendment of the hole with “soil conditioner” (which is 5$/2 cubic feet), planting on a 6" berm, and digging a hole 2 to 3 times wider than the root ball and filling it with amended soil. So, basically, 36-48" for my trees that I’ve repotted into 15 gallon pots.

The 50% is their most updated recommendation for tree planting and I am considering using it, based on your post. I will probably need to aim for a 6-8" berm and dig it in a 3’ circle around the plant. I’ll dig a hole 7-8" more shallow than the rootball (my pots are 16" high, so 7-8" deep, to accommodate for sinking as I have a potting mix high in organic materials, the trees are not expected to be root bound) and fill it to form a basin around the tree. The basin will be filled with a gentle slope such that at the most minimal point will not be back filled. The top soil and raised aspect of the berm will start at 40-44" and extend to 44-48" around the plant. I will also try to keep that entire volume of the berm filled with mulch (planning on sourcing it from San Antonio waste disposal). I have Spectrum coming in to move the wires in my yard, which should allow me full access to my yard. Planting shall commence while the trees are dormant between December and February. The soil I don’t use will be reserved for building raising pre-existing garden beds even higher to accommodate additional trees that aren’t being planted in a location that will readily accommodate a berm.

What do you think?

I don’t know your soil - but I would be afraid to do 50% in my soil. But your local nursery should know best. What soil conditioner are they recommending?

They have an in house recommended one, which seems like a manure and wood chips blended together.

Why would you be afraid of 50%? Circling roots?

Yes circling roots - the link that Drew put in a post previously illustrates what can happen if the tree roots do not propagate outward. I use a mix of soil amendments (usually what I can afford at a given time) but most of what I use is processed cow manure. The use of unprocessed manure will likely burn your trees and/or rot the roots. Your local nursery should know best.

My advice - try planting in raised boxes and at ground level - you may not need raised boxes. Start off without amending the soil but if the trees don’t prosper than amend.

The problem is I see it is amending the hole. I amend the soil from the top down with compost and mulch, this is seen as the best way by many experts. I think amending is fine as long as it’s not as good as the native soil.

I have seen several hundred wind break trees that were grown in one gallon pots and planted by using a post hole digger. Maybe one in a hundred roots would grow in a circular pattern

The soil was not amended, if it was it would be a different story.

Which is what i would say if I were selling soil conditioner. Here most soil conditioners are 100% pine bark. I have no objection to using it, it has low nutrition and will not hold roots back. Lasts a bit too.

Some of the old timers have not chimed in, I learned from them that long term good soil makes for crappy fruit. Fruit trees perform very well in sandy loam, which tends to not hold many nutrients. New trees need help but once established do well with minimal nutrients. These are not vegetables. Don’t grow them as such.

A weakness of this forum is that same questions come up again and again and sometimes the most experienced members either don’t see the latest version of the question or maybe just get tired of retyping what they’ve already done.

Hi, My friend would like to plant several dwarf stone fruit and european combination in his backyard. I’ve had the best luck with sweet cherries on Gisela 5. I’ve temporarily grown trees in raised beds–I had a couple sweet cherries on gisela that I just had nowhere to plant (I overordered that year), so they went into a raised bed I used to use for veggies. They survived but didn’t thrive; I wasn’ taking the best care of them. I’ve also grown two super dwarfing, patio peaches (bonanza?). I…

My thought is nursery is recommending something they are selling. Is that the best source of info?

Below are pics of a potted Reliance peach tree I planted in Spring 2015. I dug it up because it has not grown well - it blooms less than my other trees, it does not set fruit as well, it is physically smaller than my other trees I planted at the same time and the last two years it has stressed mid-late season and gone dormant early. Look closely at the root system - the roots for the most part have not grown outside the area of the original potted container. There were 3 small roots that had grown out but they were super small. This is why I started amending the soil and switching to raised containers in some areas of my yard - the root system just will not thrive planting as is. In this case amending did nothing. I did trim the roots back and replanted the tree in another location - maybe I will get luck and it will grow next year. 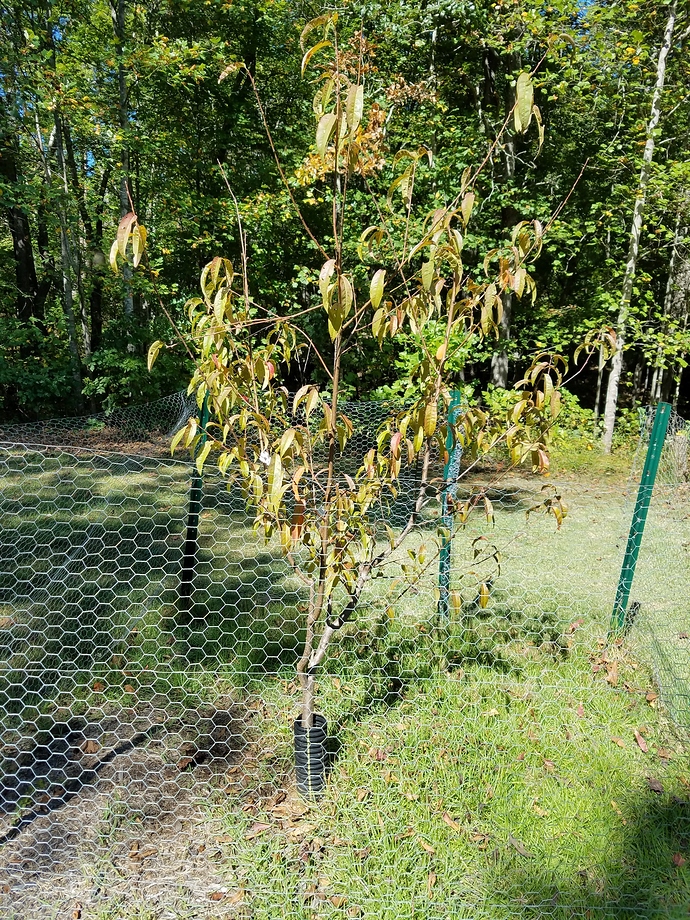 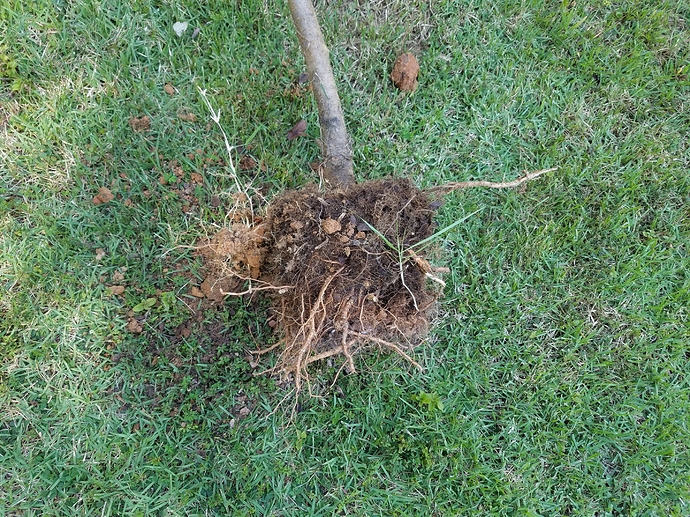