My native soil is typically high in acidity (5-5.5) and also magnesium content. The soil composition is a clay loam with a high organic matter and holds moisture fairly well but can have a tendency to compact; a problem, I know excess mg can exacerbate.

I am looking for ideas on how some people, in similar situations raise the calcium levels and PH in their soil without raising the the ca/mg ratio. I know wood ash works well for raising ph without adding any magnesium but what about ca?

Just grow lots of blueberries…and send some to me

@stealthmayhem I dont even have to try with low bush blueberries! They are wild around my area.

Ag lime or calcitic as it’s also called, which is basically chalk, would have a higher Ca to Mg level (about 40:1 or more), so that’s what you’d need to get your pH up. There is another lime called dolomitic lime which is only 2:1 Ca to Mg, so that wouldn’t be much help to your situation. Ag lime is very light and hard to spread, but would be your best bet. It will take a while to break down in the soil, so the sooner you get it down the better. Last time I bought either one, it cost about $3.50 for a bag of dolomitic lime, or $4 for a 50lb bag of ag lime.

Wood ash can raise Ca levels, as well as potassium levels at a lower degree, but you would need to use a lot of it to matter, and it’s not consistent in its nutrient levels.

We had several plots we wanted to grow veggies in, but the pH was about 5, which is too low for those. I got a soil test done which showed low Ca and Mg levels, so it didn’t matter which one I used, just as long as I got enough on there. For about a 1000 sq ft plot, I ended up putting about 200lb of lime on that one plot alone, this was done a couple years ago. Now the plot is about 6.3 pH. We also had to add some fertilizer to get the P and K levels up, about a 50lb bag of 10-10-10 just for the one plot.

What are you trying to grow? If its vegetables, it would be best to use a raised bed rather then try to fight your native soil conditions.

What are you trying to grow? If its vegetables, it would be best to use a raised bed rather then try to fight your native soil conditions.

I agree with that. As the battle will be over but not the war. many battles to come down the road. With a raised bed you set and forget. But you have to maintain it too, so it never ends! I use beds and love them. Both for veggies and for blueberries. So easy to keep the pH low in them. I could grow veggies without the beds, but my dog knows to stay out of the raised beds, but can’t tell between garden and grass if all is in ground. He doesn’t get why I’m yelling at him. So now we are both happy, he knows his boundaries and my plants are fine.

Also things like working on the bed in a chair and not having to be on the ground. Just don’t make them wider than 4 feet.

I have a 2000 sqft plot now so going back to raised beds is out of the question! The garden is herbs,leaf, root and fruiting crops. The bulk of space being taken up by corn and root veggies.
The native ph is 5.5 to 5.8; so not far off what is optimal for most veggies.
Whenever i talk to other growers or local suppliers they seem to only offer dolomite lime with no alternatives. I find this surprising because any soil tests ive had done in my area always indicate an imbalance between ca and mg with the former always being far too low. Wood ash seems like a chore considering how much would be required. This left me using crushed sea shells ( i live very close to the ocean). Everybody thinks im weord using them so im turning to you guys to confirm i still have my wits!!

Crushed sea shells are fantastic. I cant think of a better source of calcium. Why would this even be a question to those guys.

They should work. You may have to do this every few years or less. Hard to say how long it will last? I probably would add some yearly. Depends on pH test, as I would monitor it for sure.

Calcium nitrate? You’d be adding a lot of N, but as long as you knew that, it could work, no?

It’s soluble calcium, I believe, and perhaps could go farther in the soil. At least that’s my understanding from my small hardware shop’s owner. I’m going to use it mainly for the calcium myself.

I find it odd you couldn’t find calcitic (ag) lime, but maybe it’s not as readily available in your location. Curious as to what your actual Ca and Mg levels are, along with P and K.

The crushed sea shells should work, as long as they’re rinsed well to remove the sea salt. My guess the coarser the shells are, the longer it’ll take to break down and affect the soil chemistry.

Their are two types of calcium carbonate and sea shells is the softer kind that dissolves in acid, so it should work well actually.

I find it odd you couldn’t find calcitic (ag) lime

I have the hardest time finding dolomite. Bonide makes a quick lime product that works quickly.

Also I must disagree with the statements about wood ash. You need a lot less than lime, it is like calcium crack! It is much better than any lime product. You have to be careful not to use too much. It works immediately too.

You’re probably right abt how much wood ash to use, I don’t have any experience with it. But, I do think it’d be hard to know what the nutrient profile would be.

I have the hardest time finding dolomite

I find this odd, I can find dolomite just about anywhere, even Lowe’s and Tractor Supply. It’s usually pelletized. I can get either at Southern States, another farm supply store here, but I doubt you’d have those in MI.

I prefer it in pellet form because it’s much easier to spread than ag lime. But, I’d think you’d have to use more of it to get your Ca levels up, since it’s Ca to Mg ratio is only about 2 to 1.

All our plots (except the strawberry patch) seem to be up the appropriate levels now after a lot of amendments, so I doubt I’ll be adding anything this year other than a bit of N for the corn. The strawberry plot will need some ferts after the season ends in June. But, the patch has a bunch of small berries already.

I just got done plowing all our plots yesterday, so we’re almost ready to start planting out, after I get them disked and tilled.

I do think it’d be hard to know what the nutrient profile would be.

I would agree, I guess depends on what wood you burned too!

I find this odd

It is probably demand and it is sold out. It’s not used much around here, the soil does not need it. My soil pH is 6.5. I never go to Lowes or Tractor Supply, none are close to me.
Luckily I rarely need it. My soil is near neutral. I used it when i was using peat moss in my container mixes. These days I use Pro-mix General mix which is peat based, but pH is already adjusted. So I have not bought it in some time.

just got done plowing all our plots yesterday, so we’re almost ready to start planting out, after I get them disked and tilled.

Awesome, hope the planting goes well. I was just out grafting, and the work never ends.
Since most of my gardening is done in raised beds I can control content easier.

It is probably demand and it is sold out. It’s not used much around here, the soil does not need it.

That probably why there isn’t much to be found, then. I imagine folks like you and other upper midwest states don’t need it with your calcareous soils. Kentucky is known for its limestone soil, but where we’re at, on a hillside, the soil can be quite poor, hence all my amending.

I was just out grafting, and the work never ends

Yeah, I just came in from my daily inspection of things. Every day I weed my strawbs, black and raspberry patches a bit to clean them up, they’ve gotten a bit out of hand, but are looking better after my work. Have your strawberries started to bloom yet? I got a call today from the county ag office, my 25 Flavorfest plants are in, so I’ll need to go pick those up.

Seems like every time I go out there my PA Freedom has a new cane that’s popped up, I’ve counted about a dozen primocanes so far. Even though its big floricanes got ruined by the cold, it sure hasn’t stopped the new sprouts, guess the crown did just fine. My other thornless BB’s aren’t nearly that prolific, at least not yet, just a couple new shoots here and there. They’re not done leafing out yet. Some of the rasps look like they might have a few fruit buds forming, and my big gooseberry has a bunch of flowers on it, the buzzers are working on those.

Since most of my gardening is done in raised beds

Well, we haven’t grown stuff in raised beds, but we did find a big, used metal feeding trough that we’re going to try and grow carrots and onions in. Root crops like that don’t do well here, guess the soil’s got a bit too many little rocks in it, so we’re going to try the trough.

hence all my amending.

Yes, and you’re doing a great job. I’m going to recheck all my soils this year. Just to be on top of any problems.

Have your strawberries started to bloom yet?

No, the plums will open any second, honeyberries blooming for a bit. Still early here.

going to try and grow carrots and onions in.

Yes, good idea! I throw leaves as mulch, add coffee grounds old potting soil, the beds become very rich, very loose soil great for root crops. I start with garden soil, so right from the start the beds are very rich in organic matter. I sometimes use pine straw for mulch too, when I can get it. I’m growing corn this year and the stalks are cut up to small rounds that are used as mulch.

Speaking of root crops, my garlic does well in my beds. Here is one of three beds. Two beds are small (one pictured), and one is 12 feet long. 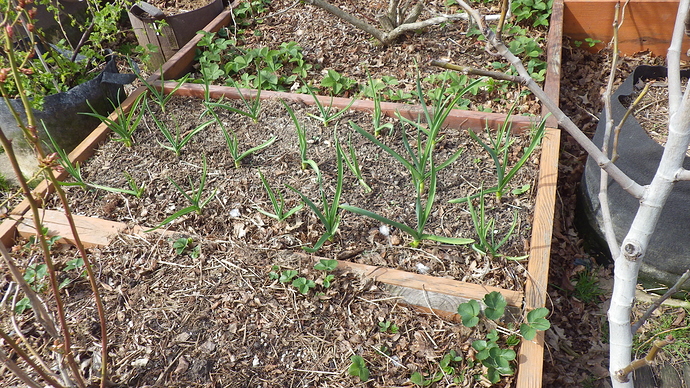 Some of my strawberries. These were covered with leaves this winter. 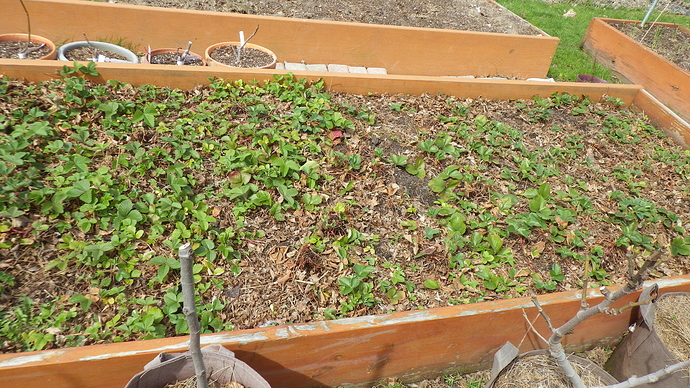