I’ve been growing raspberries for a couple of years now (primocane varieties). I always trim away floricanes as soon as they’ve fruited. This year, the floricanes leafed out and were looking great…for about two weeks, then they rapidly started yellowing and eventually completely dried out and died. This was soon followed by the primocanes doing the same. The entirety of the plants died in June (I had about 5 raspberry plants). Luckily some of the roots must have survived and put out some runners which I was hoping to move back to where I would like them after they had gone dormant. Now it looks as though the new plants are doing the same. Any ideas whats going on here? I checked the old canes, it does not look like its due to borers. 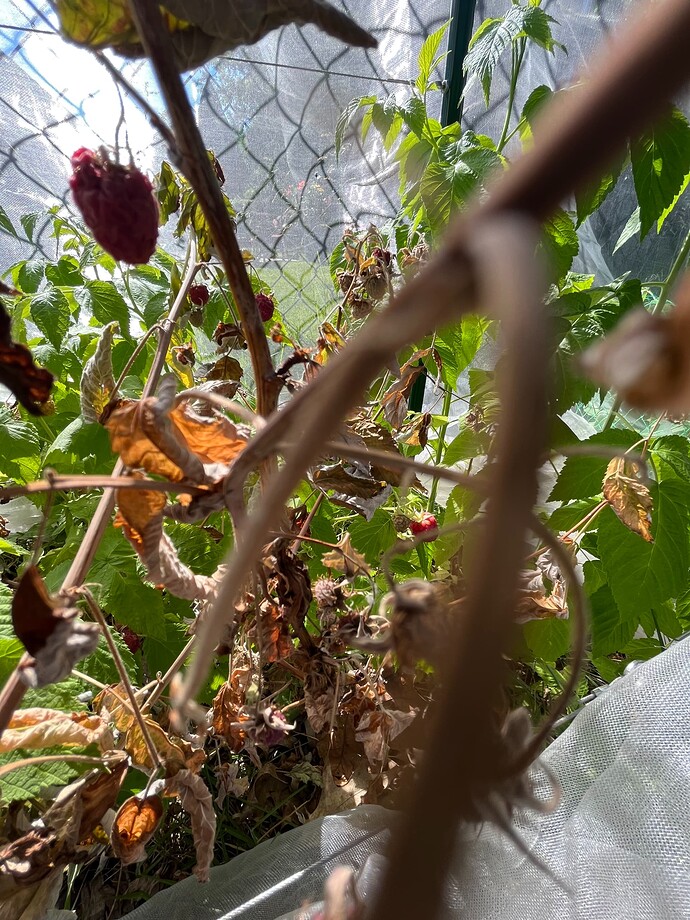 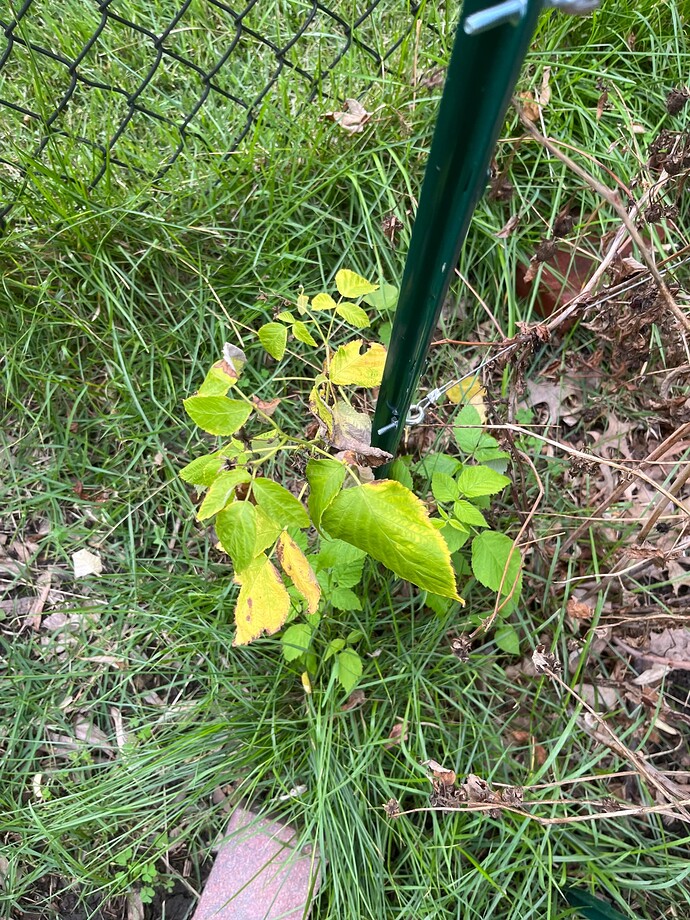 I had the same thing happen this year and it is most likely root rot from the extra amount of rain we had this year. We hit a dry spell and mine seem to be rebounding as well. Next spring I will dig them all up and transplant them into mounds.

Thank you! Reading up on it more, it sounds like you are correct. Hopefully some of them will make it to winter so I can replant them as well. 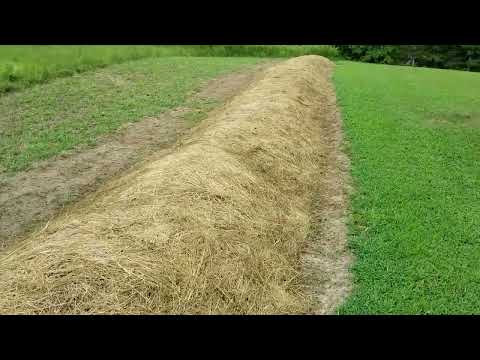 I plant pretty much all my stuff in borderless raised bed type mounds like this.

I have about 4 inches of pretty good dirt… then rocky sticky red clay. I break up a 8 ft wide row… 4 inches deep… then rake all of that soil up to the center to make 4 ft wide borderless raised bed.

It drains well that way and i double my good soil depth where my plants grow.

My raspberries… and everythig else like it and do well. It is a little work… but gives very good results.

@northwoodswis4 … It was… that was by far the longest borderless raised bed I have made.

I planted it full of fruit trees berry bushes and canes spring 2020.

I have several others that are much shorter some as short as 8 ft. Just a nice smaller raspberry patch. 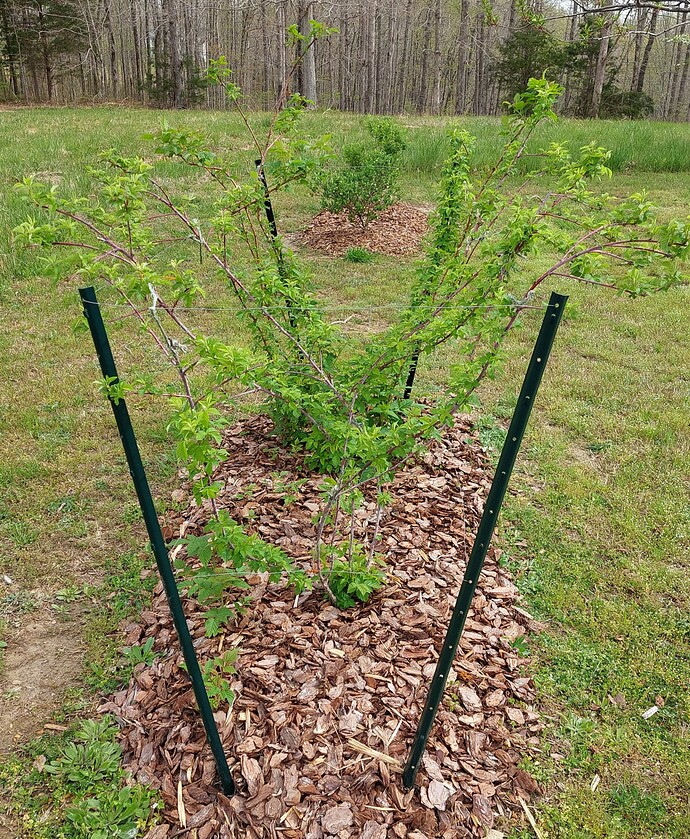 Does not take long at all to make a nice smaller borderless raised bed.

Wow, I love the idea. I may employ something similar. Thank you! Do you know if its a bad idea to try this in an area that has been infected with root rot already? I’d assume if that location has it, then all other sites at my house have the pathogen present. If I just increase drainage sufficiently maybe that will be enough to disrupt overgrowth?

@Rawnutphobic … I found this online…

Prevent root rot by filling ing low parts of the garden and improving the soil with organic matter so that it drains freely. If you can’t improve the drainage, use raised beds filled with well draining soil. Taking care not to overwater garden plants will also help.
…

Sounds like you can improve the soil and drainage… and they mentioned raised beds and prevent root rot.

I like to construct a new bed in the summer or early fall like that… and cover it with mulch… and let it sit (composting in place) summer fall winter… then plant it the next spring.

The root rot spores are from a fungus in the soil and travel to the roots and crown when the soil is wet. The fungus can last in the soil for years.

Black rasps are fairly resistant…but Cumberland is the least. I just put some Cumberlands in the row this year and out of the others…its the only one that seems to be affected.

Social media gets bombarded this time of year with the same questions… mostly folks that seem to want to water their raspberries every day… or too often.

In nature you will likely see most raspberries and blackberries thriving on banks or slopes… they dont really like flat ground…unless its fairly dry and the water table is low.

Like TNhunter says… raised beds are a great option in low lying or soil that is close to the water table.

If raspberries are under-watered in summer, leaf edges may brown out and the tops of primocanes may nod, otherwise they are fine. The soil should be probed and if completely dry multiple inches down, then water; that should prevent burning and nodding.

My raspberries are in a raised bed and watering 1x per week. They are Caroline and Jaclyn types, more resistant I think? Nova and Heritage next to them are just fine.

It seems a lot like root rot, but because of the facts above, I wonder if there is any other possibility? I don’t see any cane borer holes. Is “cane blight” possible?

Thanks for any help! 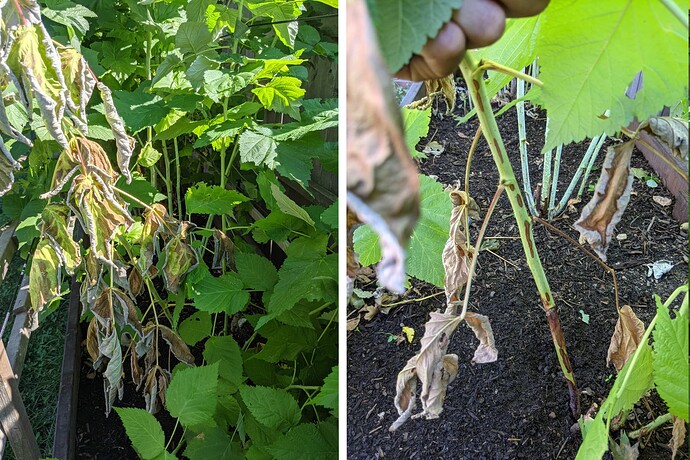 Although root rot can affect individual canes in a planting initially, I would expect a spread of the symptoms over the same growing season.

Individual canes croaking among other healthy ones may more likely be insect damage.
Borer holes may not be apparent. Often there is a faint slightly dark ring around the cane near the beginning point of wilting/drying, or a bulge.

A blight would be expected to affect multiple canes.