I grew an orange raspberry for 12 or more yrs that I dug up from an area. I have no clue who planted it or what it’s proper or common name is. I moved 3 yrs ago and the temp place I had for them was not ideal and they did not come back the next yr. So sad. They grew very long. Over 12 or more ft. I pruned back to about 6 feet and the laterals to 3 ft. The fruit grew from the laterals on second yr canes. I propogated with tipping. I don’t want Annes or anything that grows in that way. I need more control of propogation as the area I live now is limited on space. The fruit was a burnt orange when ripe and had almost no tartness. The canes were green and stayed green until they started to die. I also managed to get more than one year of harvest on the same canes. I can’t find anything online! Sorry I don’t have better pics. I really would love any help. 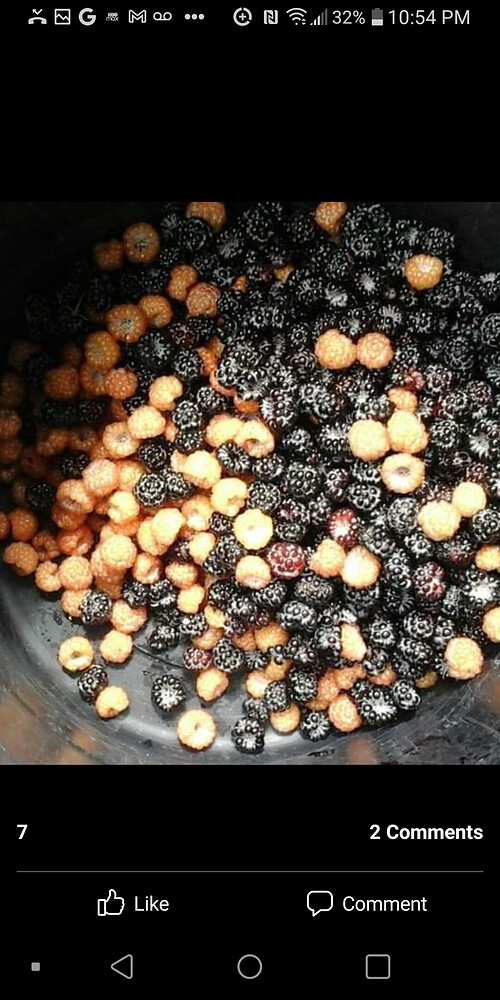 I can only add pics one ata time. 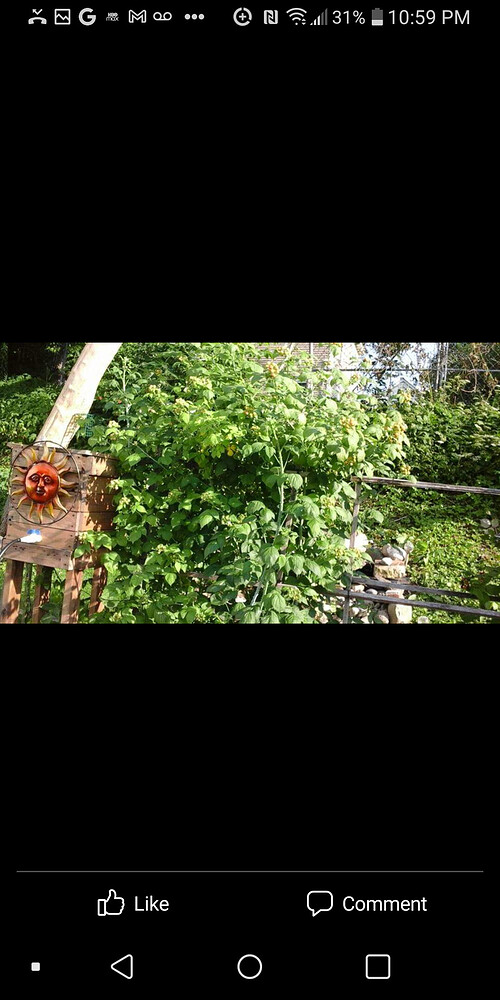 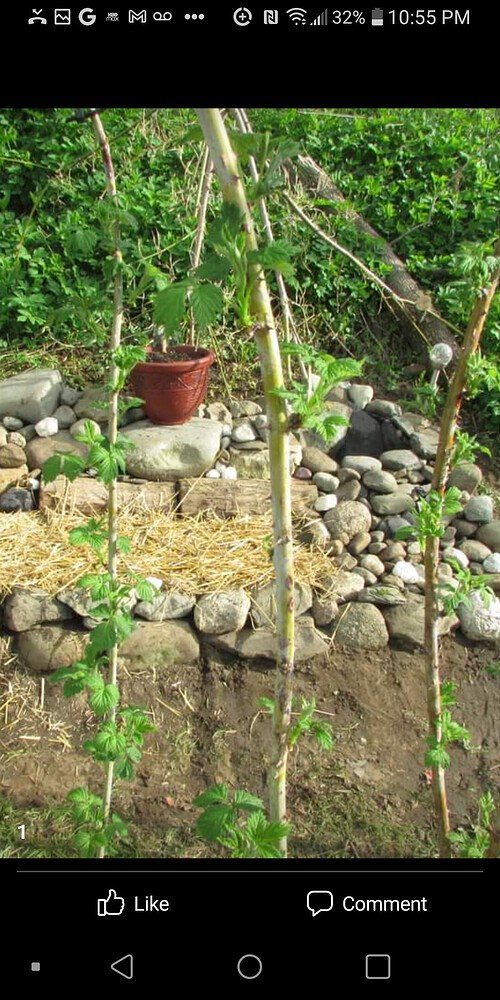 sounds like double gold. it fruits on primo and floricanes and has orange berries like that. salmonberry would be my 2nd guess but the canes look different than raspberries. what growing zone you in?

I had fall gold raspberry and i would say its probably a similar experience and growth taste profile as what kat has here except it has reduced in size each year and now i am going to replace it. How has double gold done over the years for you?

or could be a yellow black cap but they tend to be more brown/ yellow than orange. did it sucker or spread by tip rooting? im thinking that by the length of canes you had a yellow sport of black raspberry. Drew51 has one. maybe he’ll chime in about it.

not very good as it was sent to me by mistake. not z4 hardy but the few berries i got were fabulous! fruits on new and 2nd year canes but Kat’s description doesnt really fit it as the canes rarely get to 6 ft.

3b to 4 northeast vermont. It grows over 12 ft and my daughter measured 18 ft with one i was keeping long so i could tip for babies. I forgot to mention it’s dangerous thorny. I thought double grew like a shrub with offshoots that come up everywhere? And thornless? I’ll have to look again.

Tip rooting and at peak they were brownish orange. They did not shoot at all and new cane growth came from the crown.

Yes these I had were very long. My daughter measured one at 18 ft that I kept long for tipping. Usually I pruned to 6 ft then pruned the laterals to 3 ft. Even the laterals would get over 4 or 5 ft if left alone.

im on a different continent. So it’s hard to judge if the varieties i know are even available where you are.

But from your disciption it sounds like it was deffinitly a “summer” rasphberry.
Does not mean it only fruits in summer. But means it fruits on 1 year old growth, and not the new growth. Summer rasphberry’s also make more trailing vines. grow more like blackberry’s.

Fall type rasphberry’s that are yellow/orange.
Fall gold
marosa
valentina
These usualy bear fruits end of summer/fall on new shoots (shoots that came out of the ground this season)
And can give an additional harvest on last year (1y old) shoots in the spring/early summer.
They grow more upright, like shrub. Not as climbing/trailing as the summer rasphberry’s

the fall types are usualy a little easier if you have limited space. and want a free standing plant (that you support a little)

Summer types are nice if you have structure (wall) they can grow against. And you can tie them to.

its definitly a orange sport of black raspberry if it fruits from the crown only and had that long canes that are very thorny. oikios carries one similar on their website. they are called brown cap raspberries. too bad you lost yours.

i grow ohio treasure black raspberry. it fruits on both new and 2 yr old canes. there are a few more varieties of black raspberry that also do this. dont know if any are available in your country.

i don’t have accses to ohio treasure. but have black jewel black raspberry.

black raspberry’s are quite different than other raspberry’s though. It’s a seperate botanical family.
They remind me more of blackberry’s than rasphberry’s.

I think glen coe is a cross of a black rasphberry and a “true” rasphberry though.

The black raspberry’s i’f seen had thinner stems though. and that dewy purple color on the stem to.

It could have been a hybrid or another member of the rubus family.
I still think it to be more likely a yellow summer rasphberry than a orange sport of the black rasphberry.

@Kat Did the fruit taste like rasphberry or more like blackberry aroma wise. (if you ignore the tartnes/sweetnes)
on your first picture, did the yellow and black fruits taste the same? or significantly different aroma wise.

i have a cascade gold i put in last spring. got 2 berries off the primocanes. they were very good! should get a decent crop this year.

I got some Ohio Treasure Black (everbearing) plants in this week… from Hartman’s plant company.

I also have Fall Gold, and Heritage RED (which are also everbearing)… will double crop.

We got our first (fall crop) from the Heritage and Fall Gold last fall and they were both very good berries, but the Gold ones were a bit sweeter.

Here in TN Zone 7a, they started ripening fruit early Sept (on first year canes) and continued until Dec 3 (our first hard frost).

Maybe i should try that one, so far the only yellow that i have grown that can really naturalize here is anne.

In general i am much more of a fan of nice tart raspberries and much prefer heritage and joan j and caroline however the yellows do a great job at not drawing in birds and not needing covered (i need my protein some how anyways) . Have you tried any yellow raspberries that are tart and sweet?

@Kat Could you take a picture of the entire bramble bed, it does seem a bit unique but that could have just been the way you were growing them.

@oscar One of you euros had a bunch of information on a bunch of new club TM varieties of raspberry that were higher yielding, higher antioxidant and better tasting. That was a few years ago, Have you tried any of those? 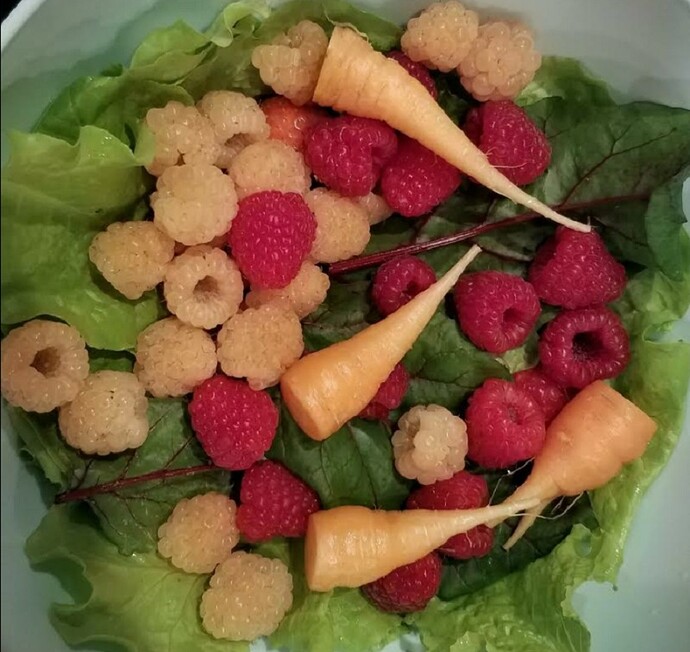 Several times a week for over two months… I would take a bowl out to the garden and pick some leaf lettuce, beet greens, spinach, young carrots, and gold and red raspberries… we had so many wonderful salads last fall.

I was so impressed with this first fall crop of raspberries and that they just kept on producing for us until Dec 3 when a hard frost stopped that.

Cant wait for the summer crop this year… and again in the Fall another crop. I am wondering why I did not try raspberries like 40 years ago.

The Ohio Treasure Blacks that I got from Hartmann’s were a bit on the small side. Probably why they sent 4 instead of 3. I have them healed into one of my compost piles now and will get them planted when it dries out enough.

They are a Black Everbearing Raspberry… so when these get going I will have Red, Gold and Black. 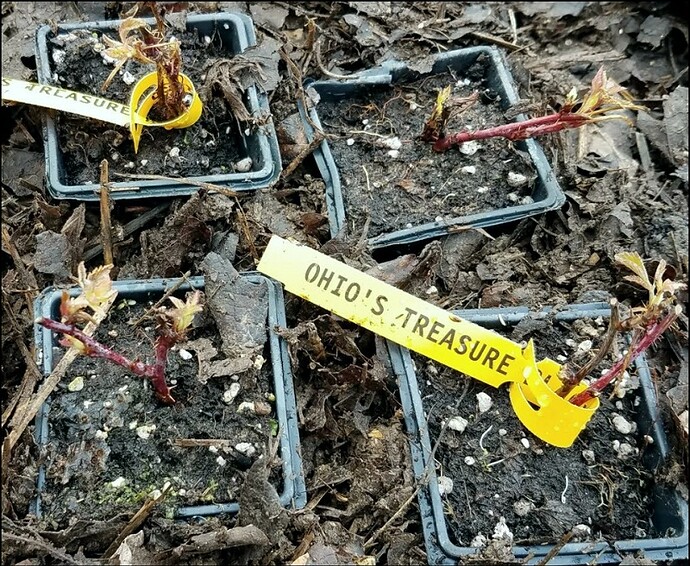 the cascade gold tastes alot like anne but its a summer bearer. berries are bigger too. i too prefer the taste of reds over yellows. i mainly grow them for something different and my wife prefers them. i find the double gold has a more interesting flavor. its a deeper yellow than the anne and cascade gold. i would give it a try in your zone. had mine on a property i manage and the drought killed it last summer. if you want to try cascade gold, i could send you some come mid may or so.