I’ve had my blueberries sitting in pails while I negotiated with my wife on the final location of the patch. That’s pretty much settled, just waiting until the fall. In the meantime I had the blueberries placed in pots and pails and left at the edge of the vegetable garden, near a hemlock hedge. Today I rescued them from under a canopy of butternut squash and volunteer tomatoes. It’s been very rainy and the spot I had these plants in was just no good. The Blueray plants both have leaves that look like what I’ve attached. From what I found on the internet, it looks like hemlock can carry and transmit blueberry leaf rust. This doesn’t look quite the same as the examples of blueberry leaf rust that I’m finding on the internet. Can anyone here confirm what this is? Is it something worth saving/fixing or should I just toss the plants away? 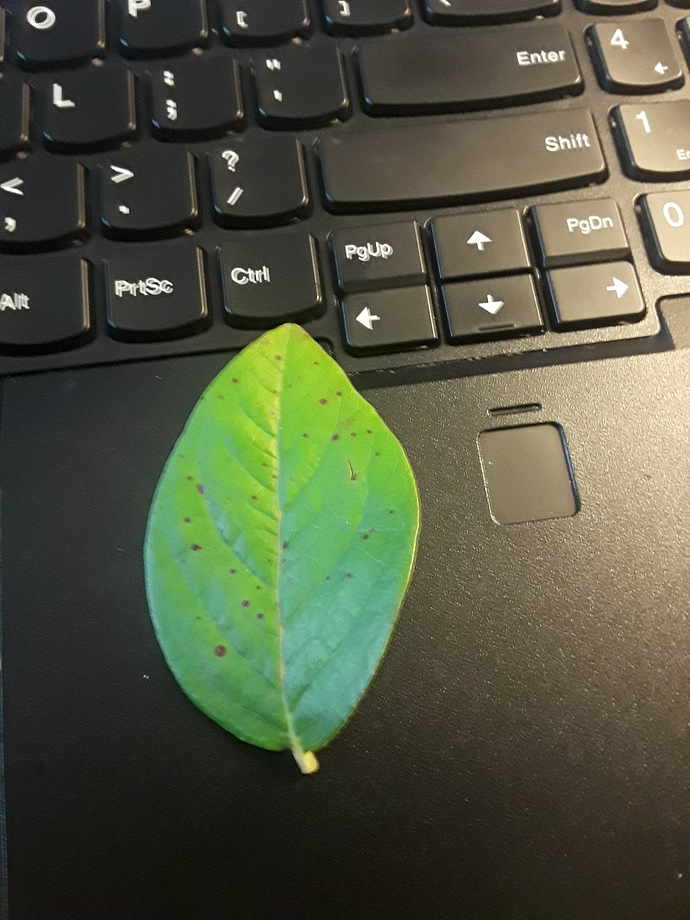 No reason to toss the plant. Once leaves are gone, spray it with copper and oil, or sulfur, lime, and oil. That should kill any overwintering spores. You can only prevent, so spraying current leaves will do nothing. You might want to spray the hedge too!

I think I’ll have to spray the hedge since the blueberries are going to be nestled into a corner near some of it. My wife is dead set against removing this hedge. I’d like to see the whole monstrosity taken down, since I’m losing ~15 feet of potential gardening space along two sides of my property line. I have an ally who says the same thing, a neighbor who is an avid vegetable gardener, but our wives just laugh at the suggestion.

BTW — I saw some of your old posts on Cara’s Choice. I’m hoping to be able to order some from Burpee. Have you tried Hannah’s Choice? I’m thinking of getting that as well.

This is what I currently have jotted down in my notepad document:

Asterisk * = I don’t yet have this variety.

Have you tried Hannah’s Choice? I

No, never heard much about it either. I ran out of room, so stopped trialling cultivars. . I went for plants more adapted to the cold. Description describes it as ideal for the Northeast. In general I’m colder than the Northeast.
On your list to me standouts would be Northland, as it has a lot of wild blueberry in it’s linage. So taste is different. And developed at MSU my alma mater. Spartan is early, big and very good.
I have not grown the others, or know much about them.I have heard good things about Reka, and Bluecrop is supposed to be a heavy producer. Dr. Mark Ehlenfeldt, and many others working together with Mark developed Cara’s and Hanna’s, and many others, like Sweetheart, Legacy, Pink Lemonade… Tested and released Raz also, an old cultivar. Legacy is awesome.Mark was asked if he could only pick one?. He went with Cara’s.

Hannah’s Choice is said to have good flavor with peach overtones. It ripens early, and has large berries. Burpee notes that this berry is “especially adapted to the northeast”.

I’m a little concerned about frost sensitivity and have the same concerns about Earliblue, but I suspect my grandfather’s sister’s patch had an Earliblue and if I’m right then I probably don’t have to worry (at least most years). There’s this one plant that has big berries and ripens at the end of June over there. This is a patch that was probably planted in the 50s and 60s. It’s a nice sweet berry.

Might as well focus on early with the SWD problem. The maggots become noticeable around the beginning of August here and I’m pretty sure I saw the wild blackberries in a neighbor’s yard just completely loaded with the flies today, they were loaded with some kind of fly anyways. If it wasn’t for this bug I’d be looking at others like Legacy, Chandler, Darrow, Elliot, Herbert, etc. Berkeley is the only late-mid I’m going to have. Does Cara’s Choice get any SWD pressure for you?

Does Cara’s Choice get any SWD pressure for you?

No, probably because of other fruit, they will attack any fruit.I removed my blackberries that ripen now, Only keeping early ripening types, so now SWD is attacking my nectarines. I’m putting them back in!
Cara’s is done, mostly because of the birds. They took most of them. All my bluberries are done except fr a few stray berries.

Nectarines, I wouldn’t mind spraying. Are you going to put up the black/raspberries as a trap crop and spray them?

put up the black/raspberries as a trap crop and spray them?

Yes, because they are not going away. I found they like my blackberries more than anything else. Enough stray blackberry shoots coming up, I’m going to let some grow. These thigs are very hard to get rid of! Any partial root grows. Cut primocanes root if on the ground. I removed them last fall. I had over 50 plants sprouting up!