I bought these 2 peach trees last September 2017. They were in 1 gallon pots. I moved them into 5 gallon grow bags and put them in my attached garage which stays between 25-40f during winter. I watered them once every 3 weeks during winter. They started to flower in early spring in garage. I moved them outside mid April I think and they had lots of peaches growing on it until birds started eating them. I was going to pick off the fruit anyway for the first year. Then this happened. During the season I started to notice all the leaves had red spots and then holes came after. Then eventually the really bad leaf falls off. I don’t see any red bumps. Just red dots with holes in them. Should I get rid of these trees? It looks really ugly. Is there any hope for these 2? 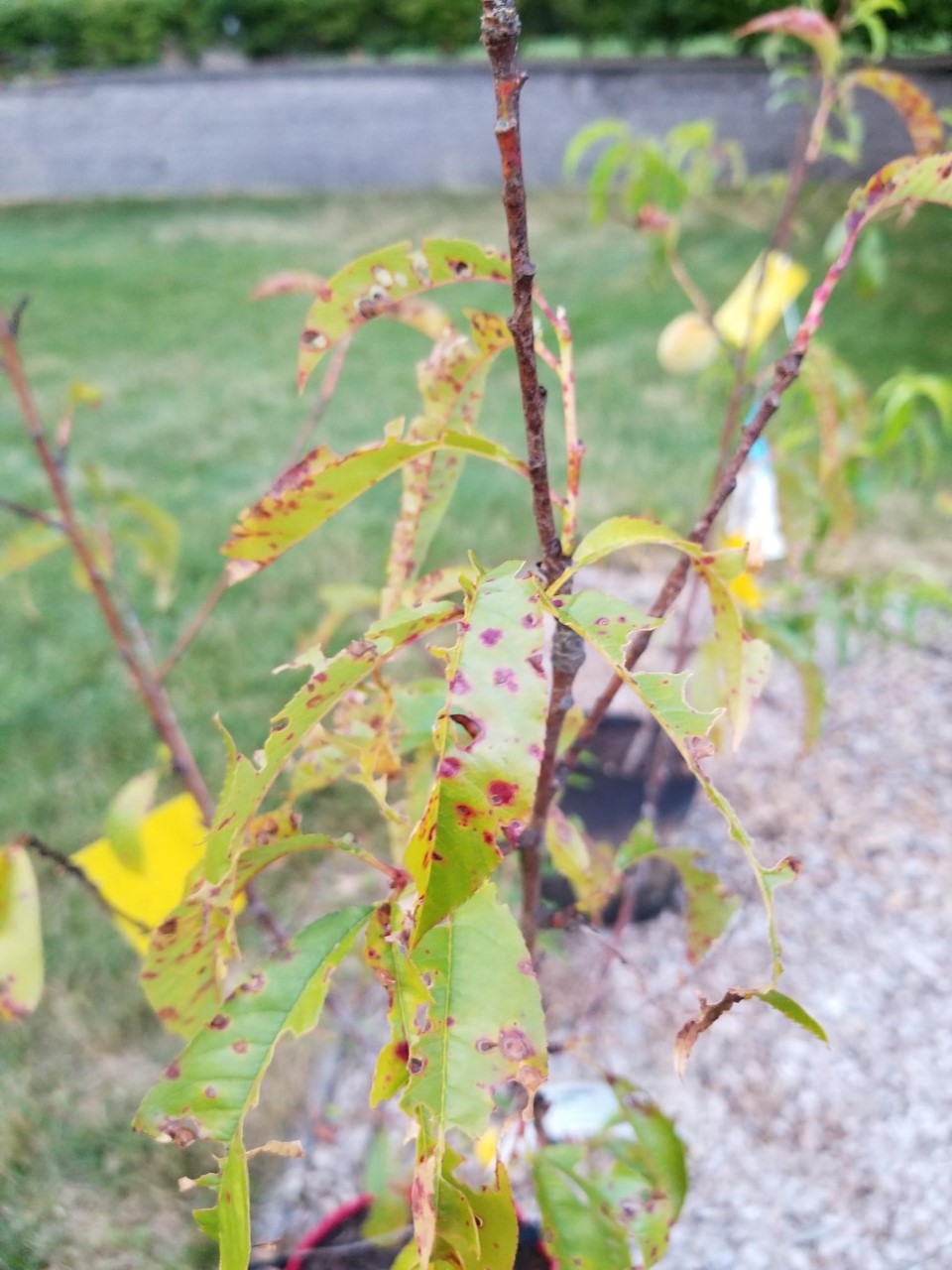 almost 90% of the leaves are gone. Not sure what it’s going to curl.

almost 90% of the leaves are gone. Not sure what it’s going to curl.

If it’s missing leaves in addition to red spots it’s likely a nitrogen deficiency. How much have you been watering and fertilizing it?
http://ipm.uconn.edu/documents/raw2/html/625.php?display=print

I think it maybe overwatering. Both plants sat in a puddle of water because it was close to sprinkler system and puddle stayed filled. When I found that, I moved the plants to different locations. Do you think I should wait and see if these will return? I fertilized it once in early spring time.

I have a nectarine that looks identical to your peach. I left it planted in a pot and did not water the tree. Just planted recently, hopefully it will survive.

I’ve never seen leaf curl like that. Every time I’ve seen it there is some bulbous leaf tissue somewhere, not just read spots.

It could be N deficiency which Clark mentions, possibly from too much water.

@fruitnut can chime in about the water in potted culture, but I’ve found that peaches in the ground don’t require much water at all.

I’m with Clark not enough nitrogen and possibly too much water. It’s not the start of PLC.

I have that problem too. I did fertilize with Dynamite 9 month, and I’ve use Foliage Pro twice this summer. My pots are very dry, though, so I have to water daily in the summer.

@sam240
Overwatering is certainly possible because once root rot is an issue with peaches or any other plants they exhibit the same symptoms as beginning disease or nutrient deficiency because the plant is not getting the nutrients aka N if it has rotted roots. So a nitrogen deficiency can be caused by inability to uptake N not that the presence of N may not be there. Normally the roots uptake nutrients such as NPK. Winter injury in very cold places can also cause that. I thought about what you said about overwatering and looked up root rot suspecting the roots were rotted. Good observation! Let’s hope some roots are still there so your peach can recover. Peach tree issue - Ask an Expert

Great. According to that it’s probably X disease, which can’t be treated. And I’m pretty sure it has infected my new, in-ground peach tree too.

Supposedly it propagates from chokecherries.

It could be X disease, especially if you are seeing it on your in ground tree. But I would think it very unusual to see such quick infection of three new trees unless you have lots of chokecherries nearby, although they could have been infected at purchase.

I’d give the trees more time and see what happens, especially to the in ground tree. X disease will just get worse and the symptoms will become more pronounced, so things should become more evident with time.

Isn’t this what shothole looks like on peach leaves? I had it once on my peaches when we had an unusually wet and humid summer. If not shothole, then I would guess some other type of fungal/bacterial infection of the leaves. Of course, there could be water and nutrient issues weakening the tree as well.

I was also thinking it was shot-hole. Nutrient deficiency can make diseases much worse so I would definitely fertilize them.

I have an apple that scabbed horribly this year and I discovered later that it was being girdled at the base. So, the bad scab was caused by the tree being very weak. I removed the rope girdling it and its starting to recover.

Not sure what caused the issue on my Nectarine but I can say that it was kept in a pot until 1 to 2 weeks ago and it was never watered. 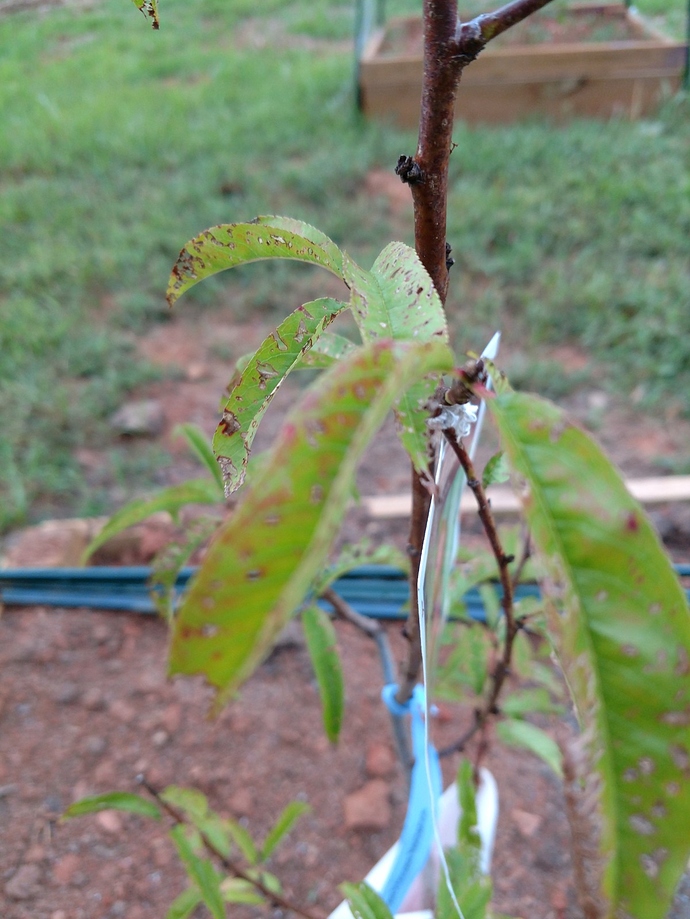 It’s a little tricky to diagnose because as they said in the article I posted “ could be an interruption of the vascular system leading to nutrient deficiency symptoms. Could be anything from root rot, cankers or plugged xylem due to X-disease.“ with that said symptoms is what I would treat because assuming it’s x-disease I think is a mistake at this point. Has the tree been sprayed with a fungicide on a regular basis? Aj, Mark & Scott brought up some great points. I completely overlooked shot hole http://www.intermountainfruit.org/dbm/shothole because I’ve only seen the brown dots UC IPM: UC Management Guidelines for Shot Hole Disease on Peach but sure enough when you look it up the symptoms make a lot of sense.

I removed these plants from the fabric pots and I moved them into plastic 5 gallon pots with half new soil and fertilizer. I did not disturb the roots. I’ve been watering it when it gets dry. 95% of the old leaves have fallen off and the new leaves are growing now. New leaves look healthy. I’ve spraying it with neem oil every 2-3 weeks. I have an issue with Japanese beetle. After I setup some traps away from the trees, I’m seeing progress.