Reqest for advice about a branch on young orange tree

I planted this Boukhobza orange in May. I would like to get advice as to whether or not I should keep a branch on it (and whether there’s any possibility that branch is not the same variety). I’m in California, Zone 9A.

I’m trying to keep all my fruit trees low and bush-like, so I was hesitant to purchase this tree because it had been trained up to have a bare trunk for 2+ feet. But it was the variety I wanted and they didn’t have any other shapes, so I got it. Soon after I planted it, it sprouted a branch lower on the trunk, which I kept, both to help protect the trunk from sun, and to encourage it to become more bush-like.

The leaves on the new branch are huge. I’m not sure why this is, but I did initially have a translucent white cloth set up to shade the lower part of the tree (including the new branch) so perhaps the lower light levels led to that. But even after I took the shade away, the new leaves, while smaller than before, remain larger than those on the rest of the tree. (I pruned the branch a couple months ago to encourage it to branch out). Now the branch is going like gangbusters with more new growth on it that is more vigorous then the new growth on the rest of the tree.

Here are my questions:

Is this branch trying to become the main trunk of the tree? It’s already nearly as thick as the main trunk. If so, should I remove it?

I’ve included a photo showing where the branch meets the main trunk. Am I correct in being confident that this branch is not part of the root stock? (You can see the graft further down in the photo)

I’m not happy with how thin the main trunk of the tree has remained, while this branch has come out of nowhere to be the same size in just a few months. Is it responsible for the main trunk not getting thicker? (the reason for the green tape going the branches is that the branches were very weepy when I purchased it, and it even felt like the entire trunk would bend over if I didn’t provide some support. I know it’s not a good idea to over-support a tree, so I’ve tried to support it loosely, hoping it will gain strength over time, but I’m not sure that I’m not creating additional problems by doing so. BTW, The water bottle and piece of wood wedged in the crotch are there to train the branch out from the tree.)

What should I do about this branch, given that I’m wanting a relatively low shrub-like tree? 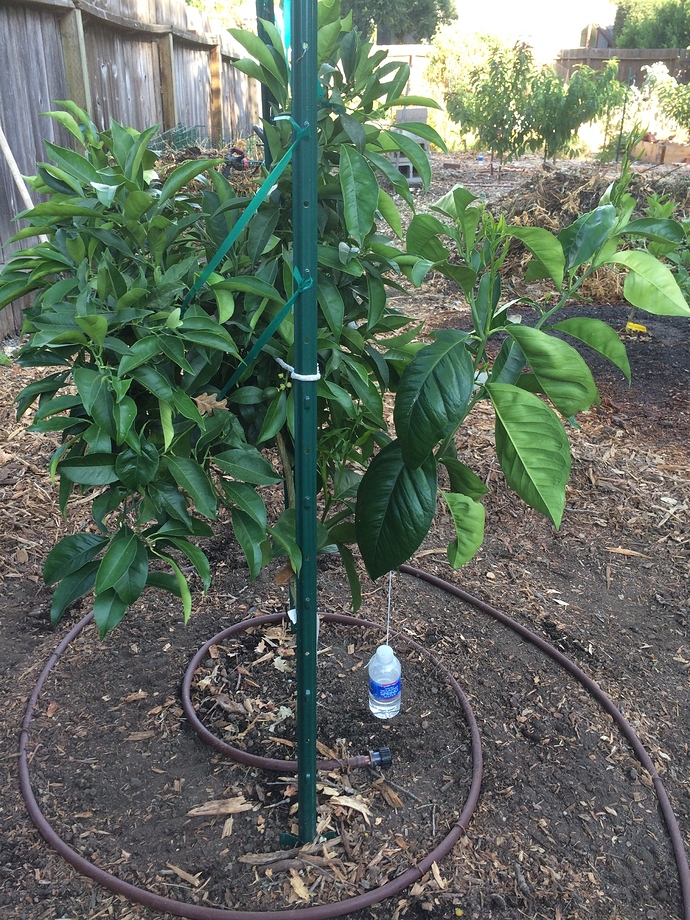 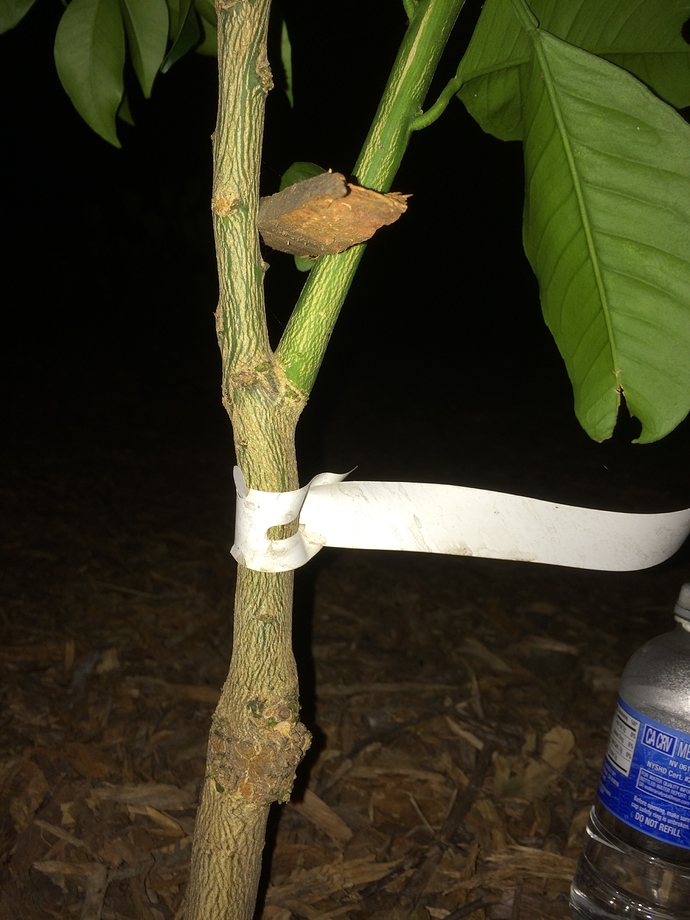 It looks like the graft is higher up, bark of rootstock is similar to the side branch in question.

I would assume that ,do to difference in leaf size / shape , growth habit
That new low branch is from (part of ) the rootstock .
And would remove it to be sure you retain the variety.
I see no real advantage of keeping that lower branch

I suspect you’re right about the branch being of the root stock. I had assumed that the graft point was where the large change in diameter occurred (the change was greater when I purchased the tree). I also thought I saw a scar from the graft at that point (see attached close-up). I’ve attached a photo showing the entire length of the trunk from below where I thought the graft was up to where there is a branch that is definitely the same as the rest of the tree. I’ve also attached a closer view of the points in question. Does it look to you like the graft point is where the trunk shifts to the left above the branch in question? I don’t see any distinct changes at any point along the trunk, but I’m not experienced in these matters. I’d appreciate a confirmation before I cut off the branch. (I really do want low branches if possible.) 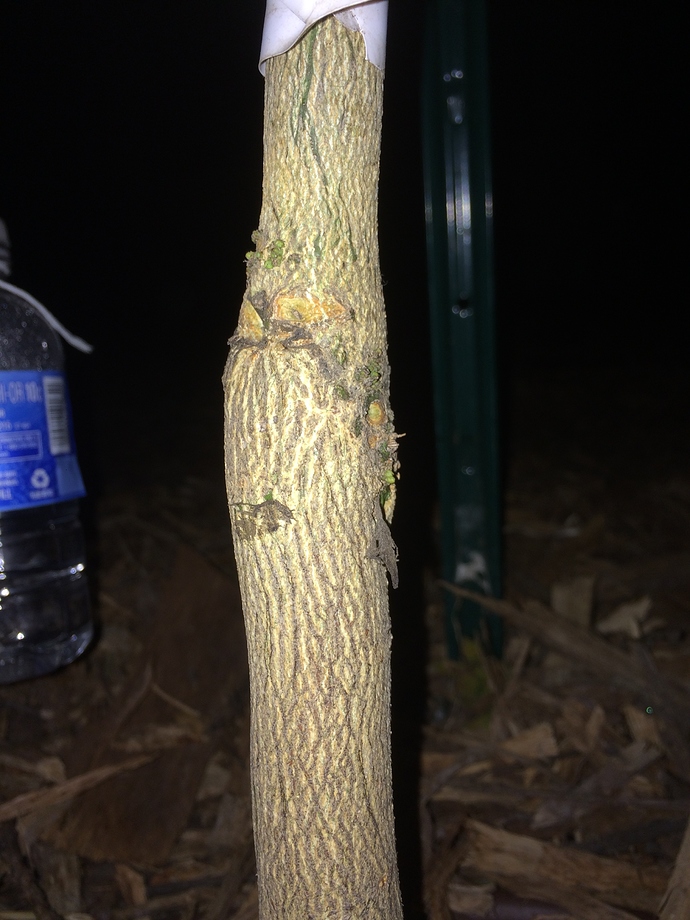 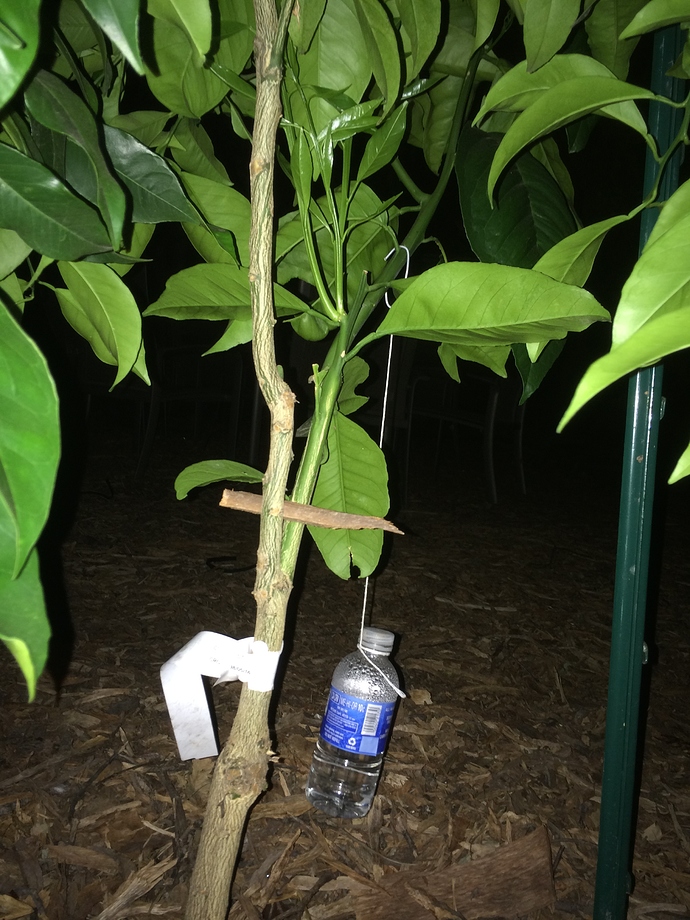 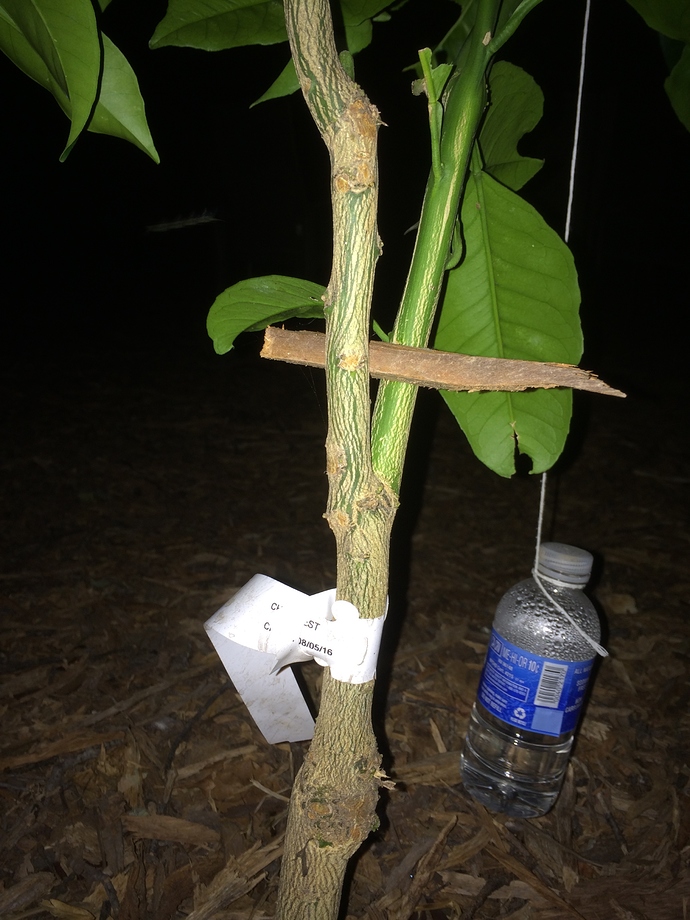 If you want to be sure for yourself leave the branch on and see what happens nothing hurt, unless it’s outgrowing the other one. The grafted sion usely grows straight up, unless the guy doesn’t know how to graft.